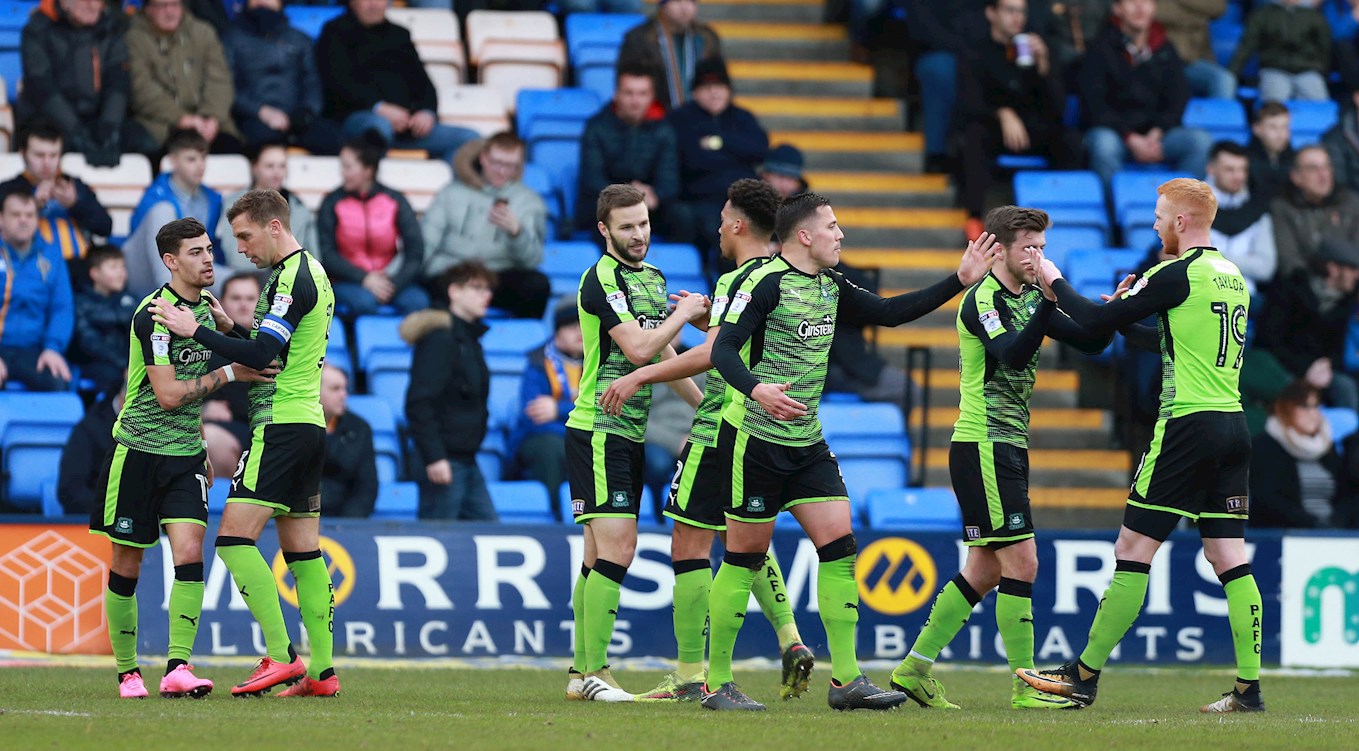 For the second week win a row, Argyle played the second-placed team in Sky Bet League One, but not for one second did that seem to faze Derek Adams or his Argyle team who, once again, put a performance that was second to none.

After Shrewsbury, as formidible a home team as there is around, opened the scoring early on via Carlton Morris, most sides would have folded. Argyle rolled up sleeves and equalised, even after Graham Carey had seen a penalty saved, through Jamie Ness.

They needed a second, and when Carey sent in a corner, at the second attempt, Zak Vyner, Argyle's number 22, found the net to give Argyle the win, and become only the second team to win at Shrewsbury this season.

That win had given Shrewsbury the chance - which they took - to go into second place, and they too would have approached this game with confidence. Their home form was formidable, winning ten and drawing two of the 13 games at Montgomery Waters Meadow.

Mr Montgomery may water the meadow, but one questions whether or not he should water the pitch. The playing surface left a great deal to be desired, and with a chilly Shropshire wind whipping up, fears were that two in form teams may not be able to fight out a footballing classic, which seemed a shame.

If that was to be the case, though, no-one had told Shrewsbury.

In the sixth minute, the home side produced a very fine passing move to cut through Argyle and open the scoring. It started with Ruben Lameiras turning where there was no space, and when he was dispossessed, Shrewsbury broke away.

Jon Nolan drove into space, crossing the halfway line and using Alex Rodman, to his left. Rodman's low ball was helped on by Max Lowe, then tapped in at the far post by Morris.

The goal, or at least the nature of it, was unsurprising. Shrewsbury have developed a reputation as being a very fine counter-attacking team, and the goal came after a couple of minutes of Argyle pressure.

With the goal advantage, this allowed Shrewsbury to play to their favourite tactic even more. One felt that not only would Argyle have to make chances count, but if they did not, they would have watch their back.

The Pilgrims got a chance when Ryan Taylor was brought down 25 yards out, and Graham Carey's free-kick was deflected round for a corner. Minutes later, though, from an incisive move from a smart Gary Sawyer throw-in, Argyle won a penalty.

Sawyer found former Shrew Antoni Sarcevic, who fed Taylor, and received a return ball as he entered the area. In doing so, Sarcevic went to ground, and referee Ben Toner felt that contact was illegal, and pointed to the spot.

Carey's penalty was not poorly struck, but it was a little off the ground, and flying to his left Craig MacGillivray made an excellent stop.

Argyle kept up the pressure after the pen, but Town had the next chance, again sensing a chance to break. This time Remi Matthews saved at his near post from Rodman, but the indication was clear from the home side.

It was not the prettiest goal Argyle have scored this season, but by thunder it was effective. Shrewsbury had yet to get to grips with Taylor, and although his flick-on was not the cleanest, Shrews did not deal with it.

Lameiras just got a toe on the bouncing ball to put Ness in the clear, and the Scotsman calmly slotted past MacGillivray.

It was no less than Argyle deserved for a bustling approach to the game that Shrewsbury, a side that had kept nine clean sheets from 13 at home, looked unsettled to say the least.

Argyle forced another corner, from which Sonny Bradley was shoved over by Toto Nsiala. It looked a clear foul - far more so than the incident from Argyle actually had been awarded a spot kick - but nothing was given. Within seconds Lameiras had fizzed a low cross that Taylor smartly turned goalwards. It took Abu Ogogo, virtually on the goal-line to block and clear.

At the other end, right-back Jame Bolton ghosted infield into a good position, but his left-footed effort was meek, and easily gathered by Matthews.

Argyle certainly looked the more confident of the sides, epitomised by volley attempts from Sarcevic and Ness. The first, sliced a little, drew derision from the home fans as their former player was off-target, but the second, by Argyle's goalscorer, was awfully, and drew intakes of breath all round.

The scores remained level at the half-time interval, and any suggestions that the pitch might ruin the game were unfounded. It had been a cracker, played at a good tempo, with plenty going on.

That said, one felt it was worth noting three meaty tackles in the closing minutes, that same one after the next. Nsiala won the ball from Sawyer, found himself closed down by a flying Carey, then Thomas crunched into Sawyer - although admittedly after winning the ball. All three tackles were fair, but had a little menace behind them.

There was no let up after the break. Argyle took the game to Shrewsbury again, with Taylor and Oscar Threlkeld seeing shots blocked, and Lameiras squaring across the box but no-one being able to profit from the chance.

Shrewsbury were barely getting to Argyle's penalty area, but one weaving run by Thomas, ended by a superb Sawyer tackle, was a reminder, should Argyle need it, that the home side had potency within them.

Just after the hour mark, Carey's twinkling feet won a corner, and after his first take - an unusually poor one - was dismissed by the referee as the ball was moving, his second caused havoc. No-one seemed able to get a significant strike on the ball until Vyner swung a ball and hooked into the corner.

Suddenly, Shrewsbury awoke, like the proverbial Kraken. Nolan's excellent left-wing cross found Thomas, who did little wrong with his header but saw it palmed away by Matthews. Thomas then burst in from the right and looked to have teed up a simple finish for Ogogo, but Threlkeld made a spectacular flying intervention to deflect the ball away.

Argyle were still a big threat, and two Carey runs sought a third. The first ended in a shot that was not too far other, the second ended with a cross to Taylor who knocked down well, but just away from Sarcevic.

Shrewsbury made a triple change to change their fortunes, but the most notable impact any had was Stefan Payne, who clouted Threlkeld after the latter had made a magnificent challenge on Thomas.

Argyle saw the game out comfortably, and clocked up another astonishing win in this increasingly remarkable season.

Are we getting carried away? Not for a second.