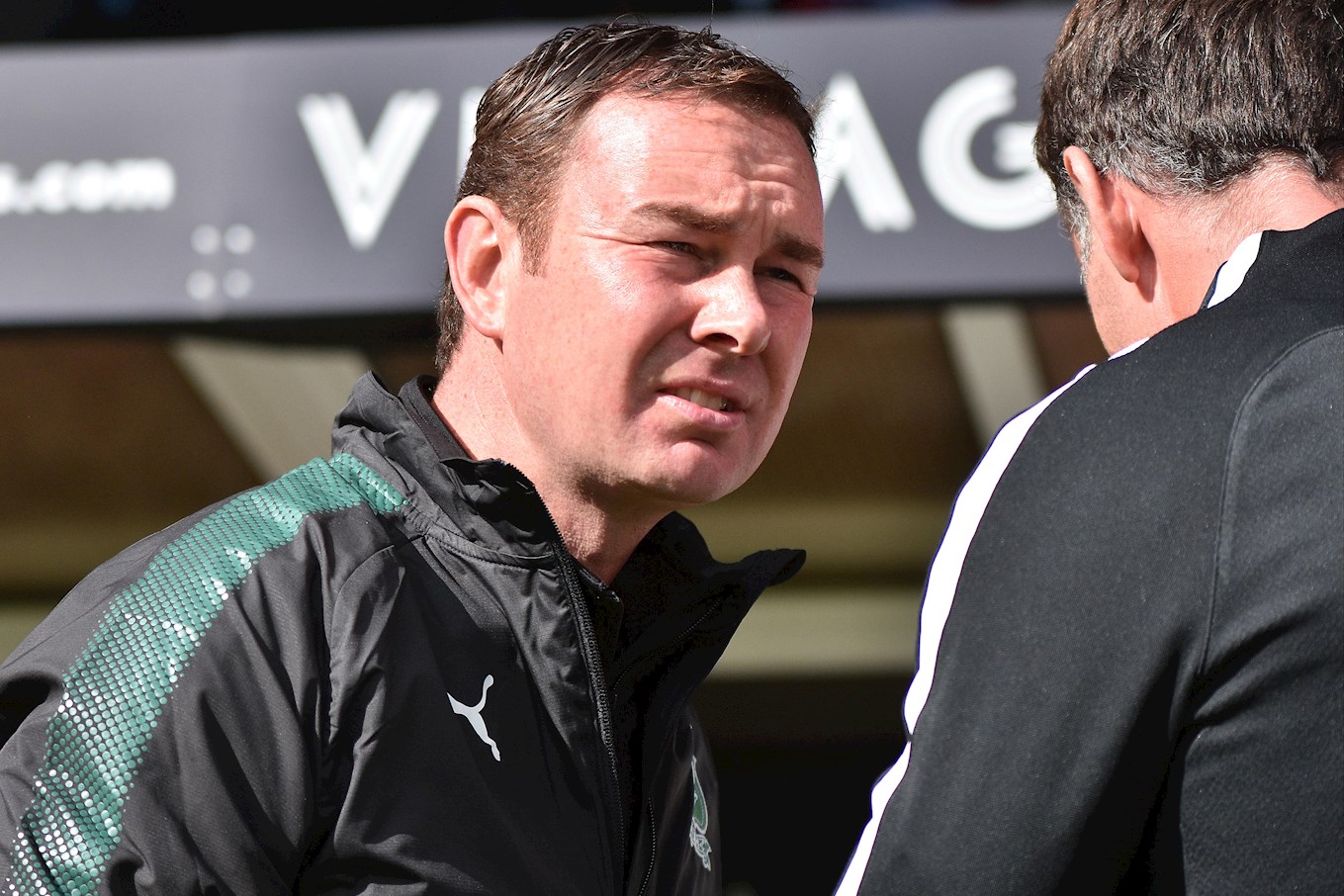 DEREK Adams’ Argyle side certainly had to fight for their 1-0 win over Walsall, but the boss oversaw a gutsy display that continues the Greens’ excellent form.

Argyle conclude their quick-fire run of Sky Bet League One fixtures over December and the New Year with a fourth home win a row – and one that takes them within touching distance of the top half of the table. A comfortable win over Oldham Athletic, a strong win against MK Dons, and a competitive draw with Blackpool were followed up with a victory in front of a five-figure Home Park crowd to kick off 2018.

“It was an important win for us today,” said Derek, “because over the festive period, we’ve had a number of tough fixtures. We’ve been away to MK Dons, away to Blackpool – a lot of travelling – and today, at home to Walsall. We’ve come through it very well.

“We’ve put ourselves in 16th position now. We’ve got three points, a clean sheet and another goal for Ryan Taylor.”

Indeed, Taylor’s excellent strike from the edge of the box on 67 minutes. After Ruben Lameiras’ dangerous run, Taylor picked up the ball, worked himself a yard of space and cracked an unstoppable shot into the bottom corner.

The remaining 23 minutes saw the predictable wave of Walsall attacks, with two strikers brought on by manager Jon Whitney. After conceding late and costly goals in recent weeks, though, Argyle refused to be beaten this time, defending superbly to see the game out

“We all know the threat that Walsall have got when they put the ball into a wider area,” said Derek. “I thought today we dealt a lot better with the cross into the box, and when the ball came out, we found the corners. That’s because we learnt our lesson on Monday. We have taken that lesson from Monday and onto today.

“You always get to that period in the game where they’re pushing forward. They’ve got nothing to lose and we’ve got two points to lose, [but] we’ve kept that clean sheet.”

Splitting the Pilgrims’ League One campaign to date in half tells you the entire story. After gathering six points from the first 13 games, Argyle have taken 25 from the next 13 to move clear of the relegation zone. Yet another strong run over Christmas and New Year for Argyle has aided that run, with a fit and plentiful squad showing their true value.

“We’ve usually done well over the Christmas period, so I’m delighted at that,” said Adams. “We’ve been able to pick up another win today and, as I keep on saying, wins in this league are very important.

“We had injuries and suspensions, and I always said that you shouldn’t judge a team until you have everybody fit. But, what happens in this world is people judge you every second of every day. As a manager, you’ve got a problem, and you’ve got to deal with those problems. We’ve overcome that and, as you can see now, we’ve got a talented bunch of players.”

Despite the busy schedule, Adams did not feel the need to make any substitutions against Walsall. Learning lessons from previous fixtures and backing the fitness of his players, Derek’s starting eleven were all he needed to secure another key victory.

“It was just difficult, because we’d made three substitutions on Monday and I felt maybe that changed the flow of the game,” said Adams. “I just didn’t want to make a change, but you never know. If I had made a change and they scored, then everybody would have said I shouldn’t have made a substitution.

“I’m very confident in the players’ fitness levels. They’ve had a tough pre-season. We’ve had a number of players out injured, and they’ve either got a freshness to them, or they are starting to tail off – and we had that today. I believe in their ability, and we do have a strong bench. Yann [Songo’o] has been fantastic and the rest of them – [Joel] Grant, [Jake] Jervis – feel hard done to because they’ve done very well for us.”

Still, a rest is certainly in order, and after taking 10 points from the last four games, Adams is giving his squad some deserved downtime, ensuring the Greens are refreshed and ready to take on Bury at Home Park on Saturday.

“I’ve just given them Tuesday and Wednesday off, because we’ve been in over the Christmas period and worked hard,” said Derek. “To play two games in three days and to travel the way we’ve had to travel; we need to rest up and be ready for Bury.”