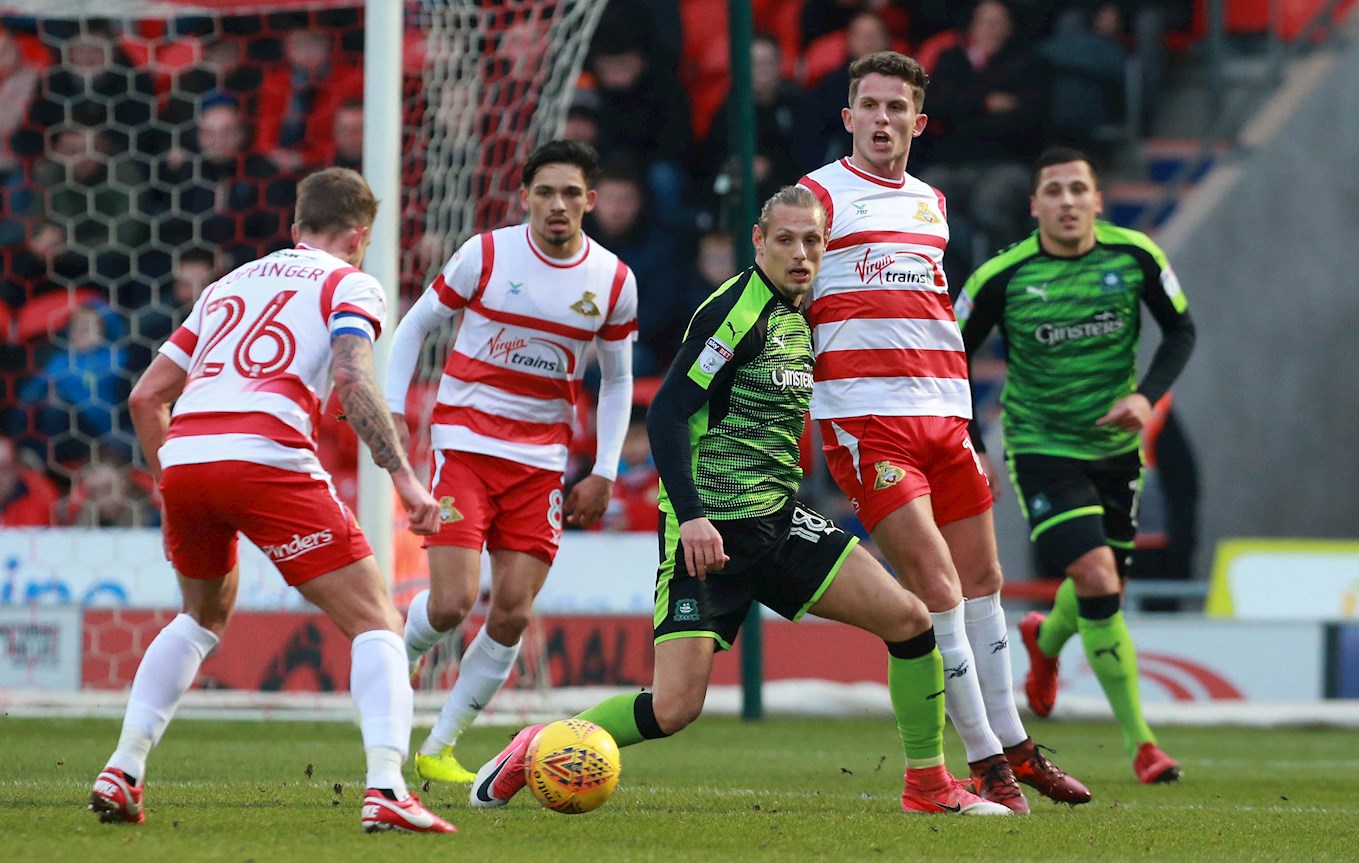 ARGYLE stretched their unbeaten run to eight game with a battling point at Doncaster that defied all expectations.

Not that the Pilgrims were not expected to get anything; more that the style in which they played, getting better the longer the game went on, was totally unlike the approach Derek Adams had previous taken against Rovers.

Doncaster were on top in the first half, but other than one John Marquis miss, created little more than Alfie Beestin's goal for all their possession.

In the second half, it was all Argyle, and Ryan Edwards's 74th minute volley was no more than the Pilgrims deserved.

In fact, Argyle looked for all the world like they would win the match, too, but a combination of off-target shots and good goalkeeping kept them at bay.

The pre-match chat, from an Argyle perspective, focused mainly on the sizable gap left in Argyle's midfield by the departure of Toumani Diagouraga. Derek Adams choice of replacement was Jamie Ness, who had not played since October 7 since suffering injury upon knock followed by setback.

Ness was set for an important role. Darren Ferguson's Doncaster's use of a diamond-shaped midfield has worked well for them through last season and into this, so Ness, along with midfield chums Antoni Sarcevic and David Fox, were in for a busy day.

Last season, when both teams were vying for promotion from Sky Bet League Two, this fixture featured rather a lot of Doncaster pressure, and chances, but only one goal, from Argyle's Sonny Bradley.

The opening exchanges suggested that Doncaster pressure may well be the order of the day, once again, but despite the home side's territorial dominance over the first quarter of an hour, Pilgrims goalkeeper Remi Matthews was seldom called upon to perform more than he would be expected to in the pre-match kick-in.

Thus, Argyle seemed to have seen off Donny's opening gambits, and began to play their way into the game. The inclusion of Ness, an all-action midfielder, as opposed to the defensive minded Yann Songo'o, and the continued inclusion of both Graham Carey and Ruben Lameiras meant Argyle had plenty of options further forward, and so some tidy pockets of play led to Argyle creating half-chances - Ness's low cross cut out before Taylor could finish probably the best of them - and corners, and starting to swing the pendulum in their favour.

Cue Argyle presenting Doncaster with the best chance of the game.

Argyle had been attacking down their right flank, and when Ryan Edwards offered Oscar Threlkeld an option from a throw-in, it seemed the Liverpudlian centre-back's right foot would ping a ball into enemy territory. Instead, Ryan slightly miscontroled, which led to a change of plan, which in turn led to an underhit ball to defensive partner Sonny Bradley.

Bradley hesitated and was beaten to the ball by Rovers forward John Marquis, just inside the Argyle half. Marquis made for goal, and bore down on Matthews, but as he tried to slip the ball beyond the Argyle 'keeper, Matthews broadened his body enough to push the ball away. By the time the ball was back into the Argyle box copious citrus shirts had recovered to prevent any further danger.

This rocked Argyle for a couple of minutes, but they recovered well, and again began to put together stretches of attacking play perhaps unexpected of them. Lameiras had Argyle's best chance of the half, popping up in the Doncaster area in space, but slicing wide, as the ball bounced a little too high for him than would have been ideal.

Doncaster took the lead on 37 minutes in the first attack they had made which actually cut Argyle open. A crossfield ball towards Marquis was headed away by Edwards, but picked up by Marquis before the ball went out of play. Edwards naturally had to cover Marquis's move, but it left a gap in the centre. Doncaster capitalised, with Beestin bursting into the space, and being found by Tommy Rowe. Beestin took the shot early, catching out Matthews, and Doncaster were in front.

In the second period, Adams matched Ferguson's system, playing Carey with Taylor. Argyle's full-backs became so advanced that gaps were being left when Doncaster got forward, but a Matthews burst from his box or a Bradley left were usually enough to halt the attack.

At the other end, the full-backs' presence was felt. Threlkeld's low driven cross was well held by Lawlor, while Sawyer shot not far over from the edge of the area.

An Argyle free-kick, earned from a cynical trip on Lameiras, was taken by Carey and powerfully headed by Bradley, but blocked on the line. Before Rovers had truly cleared Sarcevic had headed Carey's next cross over.

It was Ferguson who went to his bench first, bringing on Alfie May and Ben Whiteman for Beestin and Rodney Kangolo. Initially, it did not halt the Argyle charge, as Taylor shot narrowly wide from the edge of the box, but May was soon in amongst the action, nearly benefiting from a moment's heistation between Bradley and Matthews. Fortunately for Argyle, May hesitated equally, and his chance was lost.

Adams sent for Lionel Ainsworth with 20 minutes to go, and switched back to his original 4-3-3 formation. Soon after, Carey was chopped down by May in an identical position to Argyle's earlier free-kick. Rather than Carey, this time it was Fox who took it, and rather than Bradley, it was his centre-half partner who met it, sweetly on the volley, and the shot was too hot for Lawlor to handle.

Argyle continued to look the more likely to score. Carey's cross, under pressure, was too much for Doncaster to safely address, and Sarcevic so nearly nipped in to nick it.

Taylor was fouled on the haflway line, and it looked as though Argyle would use this as another chance to get their big defenders up, but Carey had other ideas. He saw Ainsworth in a good position and took the free-kick early with a stunning long ball. Ainsworth's cut back to Sarcevic was perfect, and Sarcevic's shot was almost just as so, but Lawlor made an excellent save to retain parity.

Doncaster, probably more annoyed at their own poor second half performance than anything, were up in arms when Bradley challenged Jamie Coppinger, but the latter fell in expectation rather than instigation, and there was no penalty.

Argyle instantly broke, and while Coppinger was still brooding on the deck, Carey was getting hauled back by Mathieu Baudry. Carey was in a great position had he gfot by the Frenchman, who was rightly booked - and probably saved his team in doing so.

Argyle still had time for another chance; Sarcevic's contact was wrong as he tried to adjust his body, and he sliced wide. It was a shame, as no-one had done more in the second period to haul Argyle back into the game.

Where the draw at Blackpool had Argyle feeling down having conceded a lead, so this game ended with the buzz with the men in green. The same point gained, but the impetus clearly with the Pilgrims. If there was any disappointment, it was not converting one of numerous chances ro win the game.

Still, eight unbeaten, still undefeated in 2018 - and the league leaders next week. Onwards!