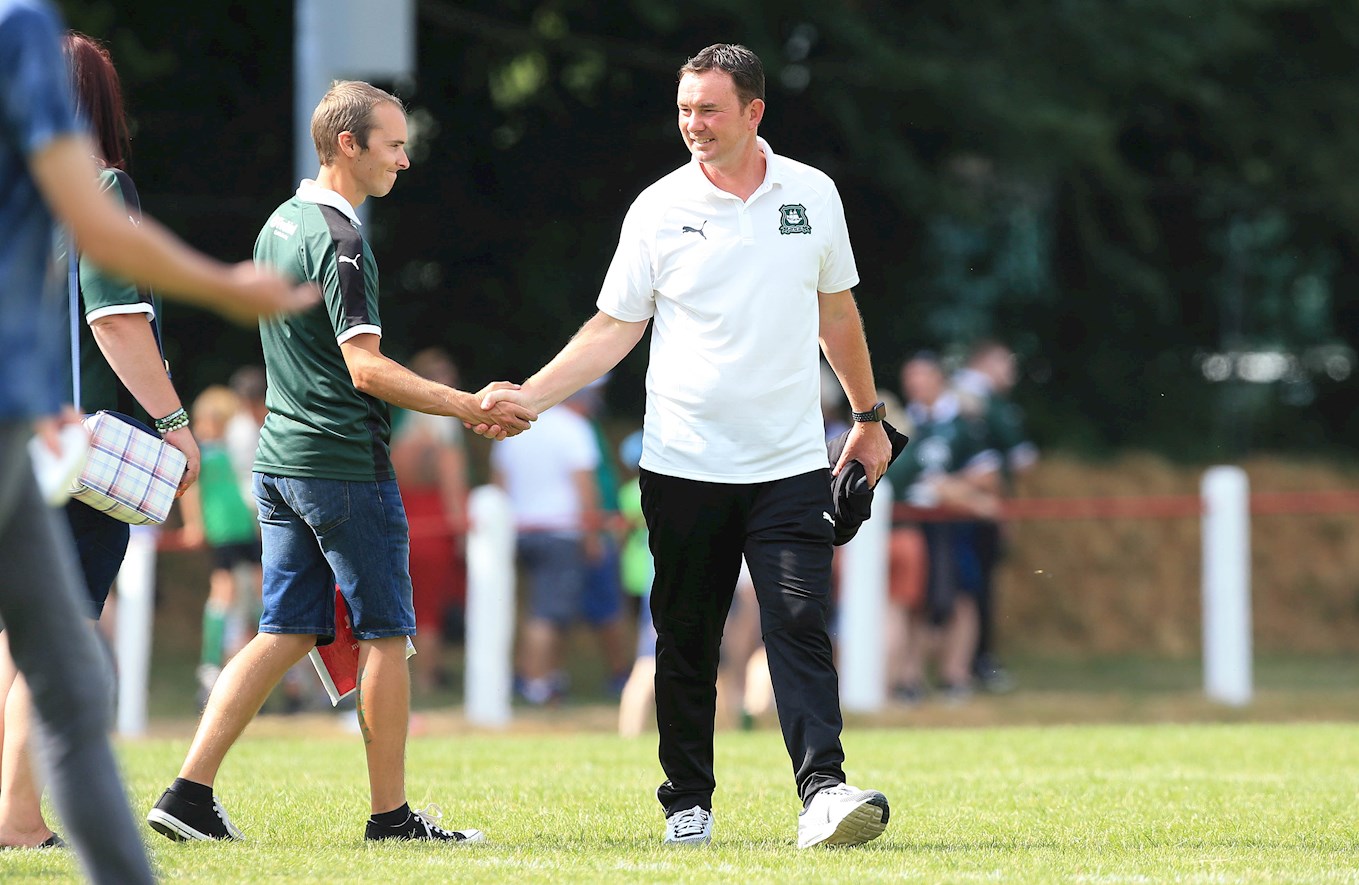 The Pilgrims have scored 20 goals four matches across Devon and Cornwall – including Saturday’s double-header against Tavistock and Helston Athletic – during which time they have covered plenty of miles and posed for hundreds of selfies as they have spread the Green gospel.

“It was another game for us, supporting the local community,” said manager Derek Adams, following Saturday’s 5-1 win over Tavistock in which Graham Carey’s two early penalties were supplemented by goals from Freddie Ladapo – who also hit the woodwork twice; Ruben Lameiras; and Joel Grant.

“We’re nearly done doing that – we have spent two weeks trying to help everyone about, give them the revenue that they require to go forward.

“It gives our supporters in all these different areas the chance to see the first-team players; it gives kids that don’t get the opportunity to see every day at Home Park. It’s been a good couple of weeks for us.

“It’s finished now. We’ve got three weeks to go to the campaign and the real work starts on Tuesday night against Torquay.

“It’s a beautiful playing surface; it’s one of the best that we always go to. We always enjoy going there; it’s always a lively game; tough opposition – it doesn’t matter what division they are in.

“We’ve played some good games, done well, scored goals, but we do need now, to play against opposition that is going to test us.

“I don’t draw any conclusions from these games. I just allow the players to go and express themselves, allow them to play the way that they want to play – once these two weeks have finished, then they will play the way we want them to play. That’s the difference.”

Argyle lined up at Langsford Park with three centre-backs – a system not used previously in pre-season…nor likely to be again.

Derek said: “We’ve played 4-2-3-1; we’ve played 4-3-3; and now we’ve played with three at the back with two strikers. It was just something I was going to do throughout pre-season. We did that for the first half; we changed it 4-3-3 for the second half.

“It is something we might need to do during the season and it gives players an understanding of that system.”

In any and all of the different systems, and multiple substitutions, they has been no noticeable change in display, individually or as a team.

Derek said: “I think it is important that we do have competition and, throughout the games, when we have changed the squads around a bit, there hasn’t been a real change in performance levels.”

At the same time as the Pilgrims were going nap in Devon, another strong Argyle side did the same on the Cornish Lizard peninsula, with Luke Jephcott’s double being added to by Cameron Sangster, Dan Rooney and Klaidi Lolos.

“We’ve got a lot of professionals down there today – first-year professionals, and second and third year,” said Derek after the game.

“It is really good for them; the goals were spread about; and they have been able to support that local area.”