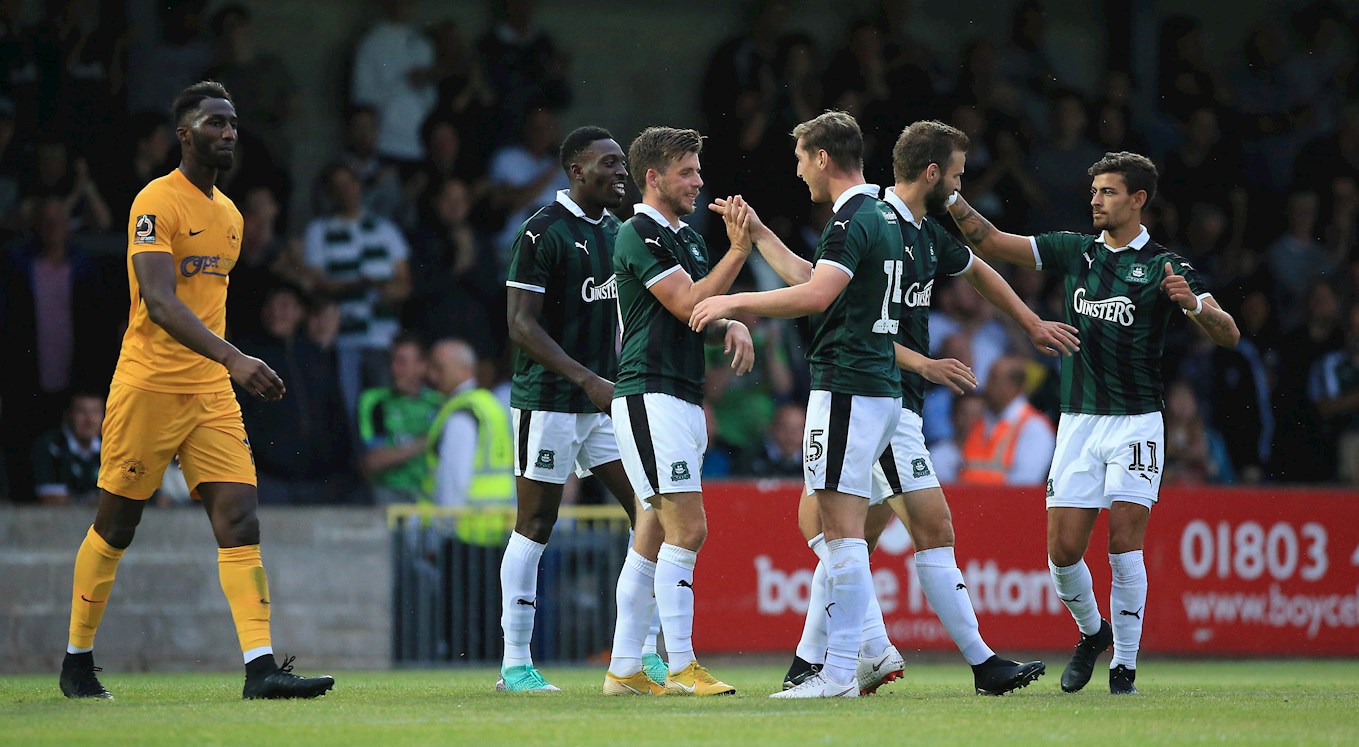 ARGYLE continued their build-up to the Sky Bet League One with a traditionally keenly-fought traditional local derby at Plainmoor.

A Graham Carey goal just after the hour was enough to see off a stubborn, energetic and disciplined performance from hosts that otherwise succeeded in keeping a dominant Pilgrims’ performance at bay.

With pre-season entering more serious waters after the previous week’s cruise around the lower leagues of Cornwall and Devon, plenty will be read into Argyle’s starting line-up at Plainmoor. Only one man knows which interpretations of his choice of starters are close and which are wide of the mark.

Centre-back Niall Canavan maintained his record of being the only Pilgrim to have been selected by manager Derek Adams to start all four of the friendly matches to this point, the former Scunthorpe United man being central to a back-four oozing with EFL experience.

While the defensive line contained just one member of last season’s squad – captain Gary Sawyer – the front six included only Conor Grant and Freddie Ladapo who were not Pilgrims in 2017-18.

The home side, now plying their trade at National League South level, had Pilgrims credentials from top to bottom: manager Gary Owers had been John Sheridan’s assistant at Home Park after working in the Argyle Academy; Jason Banton was a maddeningly frustrating player under them; and Ryan Dickson, from Saltash, was a pacy left-winger as a Pilgrims youngster and is now employed as a veteran central midfielder. In the stands, injured, sat Jakub Sokolik, a promotion winner with Argyle in 2016-17.

For the first time since they returned to work on June 28, Argyle’s players were able to enjoy a game on a surface that had defied the ravages of this glorious summer of 2018 and they were clearly in their element, zipping the ball around at a decent lick.

Central to a lot of their efforts was midfielder Conor Grant, the only one of 21 Pilgrims not to see any action at Tavistock the previous Saturday but, having been promised his opportunity by his manager after the 5-1 victory, he made the most of it.

Only a fine save by Gulls’ goalie Alex Bass, on loan from Portsmouth, prevented Argyle’s former Everton man from opening the scoring through a deflected shot as Argyle cranked up some pressure which was further illustrated by a low shot from Ladapo that would not quite curl in enough.

Bass palmed away a Carey stinger as Argyle maintained momentum all the way to the whistle which ended a seventh successive half of football in which their goalkeeper had not really been tested.

The Pilgrims finally converted their domination into something tangible just after the hour when Carey netted his fourth goal of pre-season by following up a shot from Jamie Ness that had been deflected, hit the crossbar, looped up, and dropped invitingly for the Irishman.

Argyle immediately replaced Yann Songo’o with David Fox, as Torquay mixed rather more extravagantly, but the changes did not affect the pattern, nor direction, of the match.

Peter Grant, on as substitute after an injury to Canavan, came within inches of doubling the lead, firmly heading a corner on to the foot of a post as Torquay continued to resist.

Not only that. Kyle Letheren was obliged to get down low at his near post to keep out a wee flick from substitute Ruairi Keating, a rare occurrence of an Argyle goalkeeper having something meaningful to do in a pre-season so far largely without a glitch.