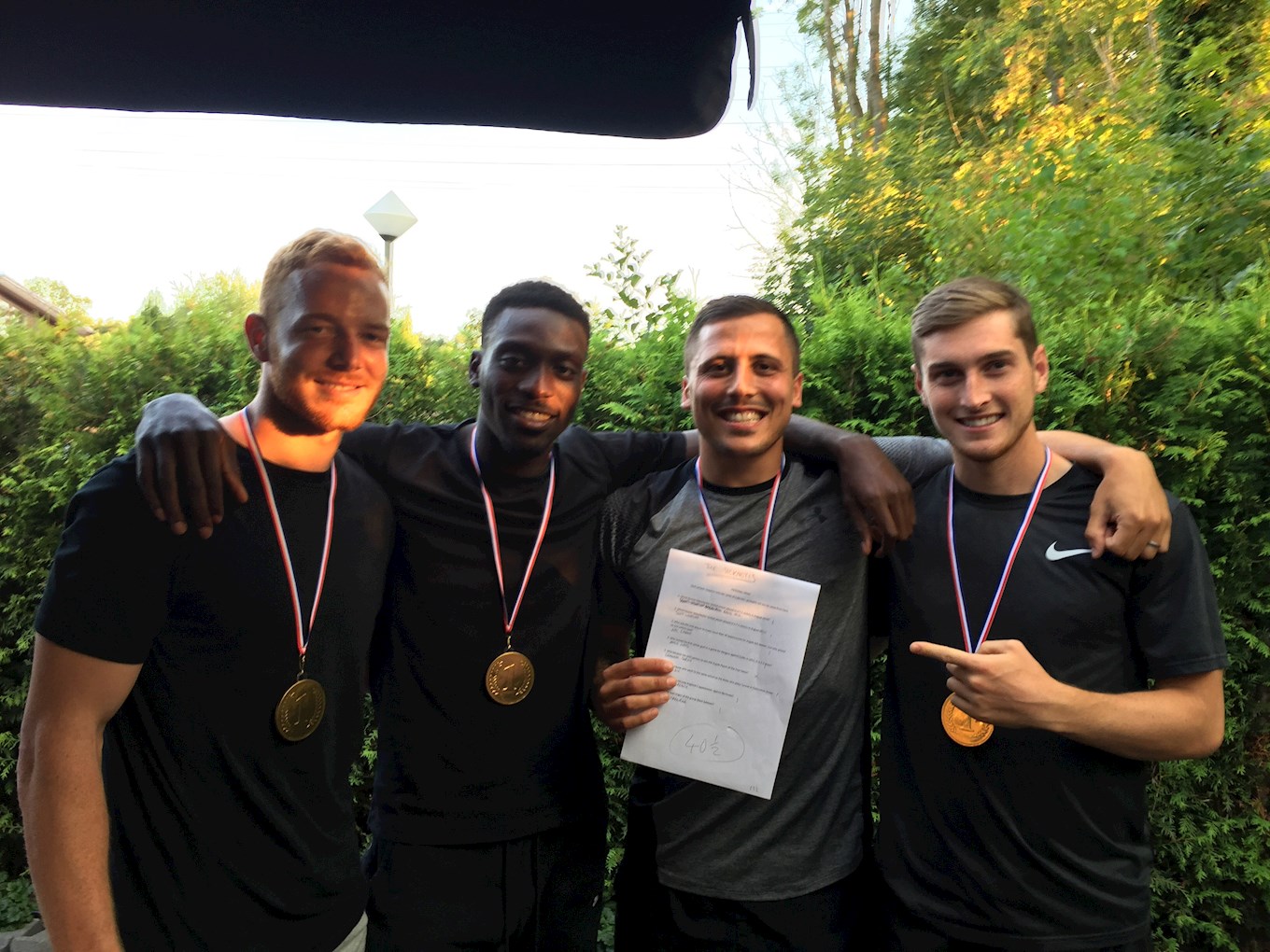 The Clog Blog: Day Four - Feel the Heat and Compete

Talking about the weather is usually the preserve of those who have run out of things to say, but It would not be right to mention the really rather extreme temperatures we are experiencing here in the Netherlands.

I understand those back in England are feeling it, too. There are rumours circulating over here that Smeaton's Tower now looks like a tube of Aquafresh. Is that true?

I walked to the nearby garage today - I was buying quiz prizes, and more on that in a minute - and it had one of those changings LED signs: '15:00' it said, before switching to inform me it was 36 degrees. Strewth. I turned 34 this year, and I thought that meant it would get easier to shoot nine holes in under my age, but I did not think I would see a temperature that exceeded it.

Wisely, earlier that morning, Derek Adams and his staff produced a training session that was fairly long, but never beyond our fit - and getting fitter - squad. Ollie Osborne's warm-up was more stretching than running, and much of the bulk of the main session focused on technique.

Soon, Derek created three units for a rather complex finishing drill, and after every team had had their go, the gaffer bellowed out their current score. "The Yellows have got this, Rob." said first-team coach and sage, Kevin Nancekivell. After one go each, team yellow were comfortably last. Good one, Nance.

The second part of the drill was a fast-moving, high-scoring, short-sided game which saw some full-on action and plenty of goals.

In steaming heat, on the Thursday of a very tough week, having had two games in two days, and a game the following day, the attitude was first-class.

Here, I have to take a sidebar. Stop me if you have heard it, because it one of my favourite topics. Anyone who drinks with me is now flicking onto Facebook because they know this diatribe.

One of my pet hates with football is the suggestion that people are not trying. I do not deny the odd player might not be at it from time to time, but 99% of the time suggestions of phoning it in are so wide of the mark it is untrue.

If they will shout for penalties and offsides, and celebrate their goals, in a training session when they are boliing and knackered, you don't think they will do it in league action? In a cup tie? Behave. Next time you consider claiming 'they weren't trying' remember that, on occasions, both teams can be 'trying', but one happens to play better than the other one.

Back to the training, and after all the shooting drills and games, the yellows pulled it out and prevailed. Never doubted you, Nance. Great call.

The losing side, during the precious afternoon off the players were given, had the task of spending five euros per head on the winners at a nearby shop. You would have thought they had won or lost a cup final.

In the evening, a barbecue, the usual meats sweats from over-indulging - though this year one could blame the temperature a little - and then quiz time. As quiz-master, I was solely responsible for the composition of the questions, but was overruled on the make up of one team. Adams, Wotton, Nancekivell and Wilmot would be a team, thus spake Derek, of house Adams. The rest of - shall we call them, a little dismissively - the support staff, Messrs Atkinson, Lunnon, Neil and Osborne, became another team, and I constructed the rest into what I felt were fair(ish) groups.

Bear this in mind. Wotton come to this quiz with a 100% record, but the heat seemed to have got to him. The management toiled into joint third (joint with 'the Support Staff', to the latter's amusement) and I would not say Wotts was not on top form, but one of the answers was him and he didn't get it.

For balance, though, I have loved listening to the pride in Wottsy's voice in talked about his son, who is part of the young Pilgrims side doing so well in Northern Ireland. Young Alfie is having the time of his life, and Dad could not be happier. Nothing warms my heart more than a father-son relationship. While the tournament is great for the kids, it is not bad for the families, too, even if Dad is on 491 Argyle appearances. He would probably trade every one of those to see Wottsy Junior pull on the green and white.

To conlude, I must inform of another - weaker - example of competitiveness. Despite the heat, at around 4.30pm, McNichol and Neil took to the head tennis court one final time. I omitted to tell you yesterday that he had pulled it back to 2-2, so Thursday's match would be the decider, with no real time for such a prestige final on Friday.

Matt convincingly took the first set, but I fought back strongly to surge through the second level it at two matches all, one set all. It went one way and other, but from 5-5, matt drove into a 9-5 lead. Set point, match point. His serve, my volleyed return, then two touches to try to lob me, but I got the header in play. With me off balance, my nemesis played a ball to my left which I sought to get something on to control it. Chest? No, it's too low. Thigh, then? But am I agile enough to - OUCH. I controlled the ball with something I ought not to mention. But afterwards I quickly counted and there were still two. Rather amazingly, I got the ball back into play with a volley, and Matt hit the net!

This was remarkable. I had saved the match, and even in my agony, thought what a great story this would be to round off a blog. "McNichol shows balls to come back from being behind - then has to ice them afterwards."

Instead, two goes later, Matt slammed a header past me and won the point, the set, the match, the series. I congratulated him, a slight octave higher than I would like to have done, and the analyst in him could not resist telling me that all three matches he had won, he had done so with a header.

The bad loser in me wants to tell him that I was not trying.