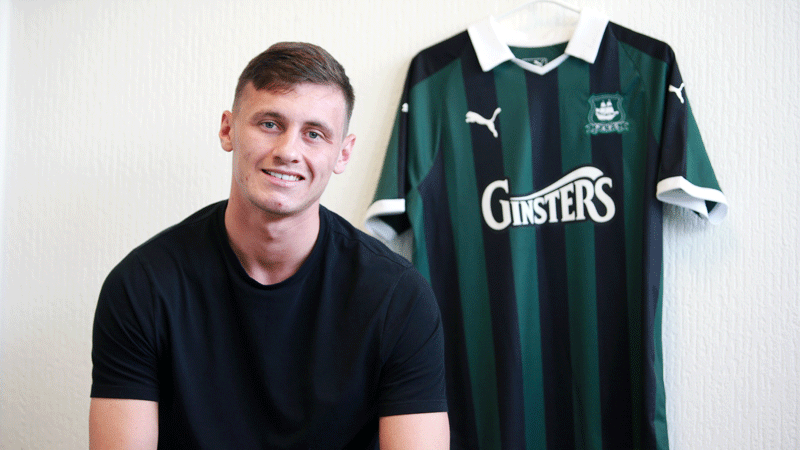 CALUM DYSON says sampling the atmosphere created by the travelling Green Army is what sold him on a move to the South West.

The 21-year-old attacker played against his new side in the final game of the 2016-17 season, as Argyle met Grimsby, looking for a win to clinch the Sky Bet League Two title.

As it was, a resolute Grimsby team, with Dyson playing the final game of his loan period at Blundell Park, held Argyle to a 1-1 draw, meaning we finished second.

Calum, though, has never forgotten the 1,834 members of the Green Army that pitched up in Cleethorpes, a long way from home, to give the lads immense backing.

“I played against Plymouth at Grimsby,” said Calum. “Plymouth had to win and it was a good little atmosphere that day, from what I can remember the fans were brilliant.

“That’s a six or seven hour journey, so they have a great fan base. That’s what sold it to me.”

Calum will link up with his former Everton team mate Conor Grant and insists both former blues can be a success in green. He also believes that their Everton education shapes them well for the future.

“He stays about 5 minutes from me (in Liverpool) I can’t get away from him! We grew up together and played in the same youth teams. Everton is a great club, you see youngsters break through all the time.

“He’s a great lad and hopefully we can push each other on and do well.

“I’ve been lucky to play with a really good group of lads; we won the Under-18s and Under-23s league. Hopefully now I can start my career and show what I’m all about.

“I like to play as a target man, win flick-ons and I’ll run all day, I like to run the channels and like any striker I like to score goals. Hopefully I can score a few for this club.”

“Towards the end of the season I did follow the results,” said Calum, “and had the big game at Scunthorpe, that was unfortunate but hopefully next year we can push on.

“I think this club can go places and get to the Championship.

“The gaffer seems really exciting as well he’s just signed a new 5-year deal and I think that shows a real statement of intent.”