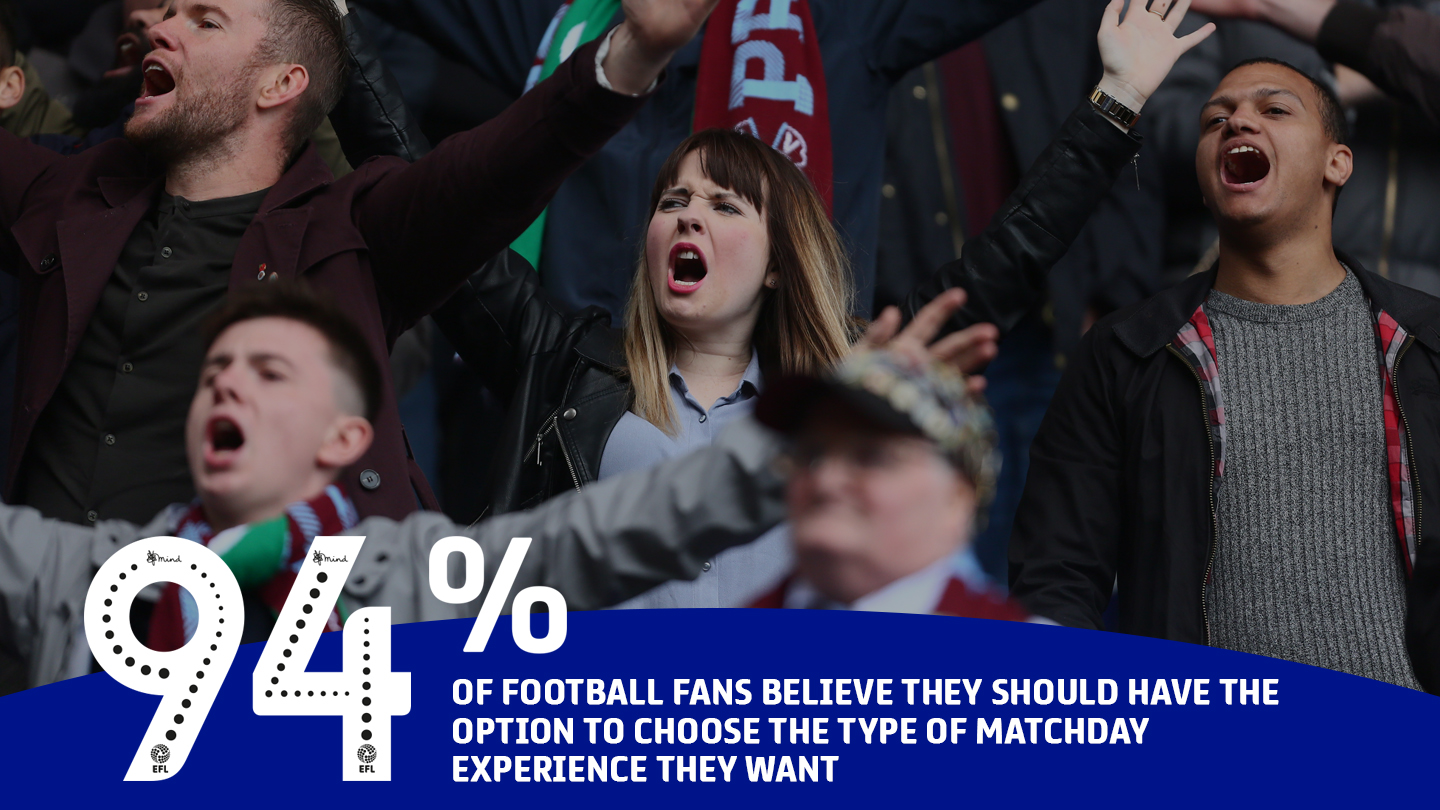 Standing Up For Choice

A SURVEY has shown that 94% of football fans believe they should have the option to choose the type of match day experience they want - whether that be seated or standing in safe, licensed areas of grounds.

The record-breaking EFL poll, which received more than 33,000 responses in under two weeks, is part of the recently launched ‘Stand up for Choice’ campaign, which is being run in conjunction with the Football Supporters’ Federation and is specifically designed to fully understand the views of fans of EFL clubs.

The consensus amongst supporters could not be clearer, with the overwhelming majority believing that clubs should be able to provide fans with a choice between standing and being seated at EFL matches.

The survey, which has received the highest number of responses for any EFL led campaign, also revealed:

· Over two-thirds (69%) of responders indicated that they would prefer to stand, compared to less than a quarter (22%) who claimed a preference for seating;

· Standing has also shown to be more popular with younger fans with the highest supporting demographic coming in the 18-34 age groups;

· There is a high demand for the choice to stand across all three divisions, with 94% of Championship supporters and 92% of League One and League Two supporters all in support;

· Nearly half (47%) of all fans said they would attend more games if licensed standing was available;

· There is no material difference between the responses compiled from supporters of the 21 EFL clubs who currently offer standing accommodation compared to supporters of clubs who don’t.

The purpose of the campaign is to provide key data and insight on the views of supporters nationwide, which is in addition to a petition that is set to be debated in Westminster Hall on Monday June 25. The key findings from the EFL survey will be used to inform that debate.

EFL Chief Executive, Shaun Harvey, said: “We stated at the outset that we wanted this survey to provide Government with a clear indication of the strength of feeling amongst those supporters who attend matches every season. The response could not be clearer.

“Football supporters clearly want the option to stand at football matches and we see absolutely no reason why they should not be allowed the choice to have the match day experience they want.

“With nearly half of all fans claiming they would attend more games if licensed standing was available, this campaign demonstrates how standing could play a significant role in boosting attendances, particularly with the under 35s demographic, a group of supporters that have a significant number of other options to consider when determining whether they will or will not attend a match. With stadium occupancy at 61% in 2017-18, a change in legislation would provide an opportunity to increase revenue from gate receipts.”

The EFL was given a mandate to pursue a change in legislation on behalf of its clubs in 2014 and is keen to develop increased dialogue with supporter groups, safety authorities and senior Government Ministers to achieve a review of existing legislation so that clubs have a choice on this matter and fans get the matchday experience they want.

Harvey continued: “The safety of all fans attending football matches is the number one priority and we very much understand why the issue of standing at football matches is sensitive and the concerns that the Government may have in terms of changing the legislation.

“However, it is the view of the EFL that the current legislation is not appropriate, with some League One and League Two Clubs allowed standing areas in their stadiums but others not. When you consider the position in the Championship it is equally unfair as Cllubs are recuired after three years to only offer seated accommodation.

“The standard of football on the pitch can have no bearing on whether standing accommodation should be available. If standing is permitted at a football match in League One, then why not a game from the division above if they are designed to the same standards?

“Alongside the FSF, the EFL is committed to working with Government in order to provide Clubs with a choice on this matter, so that fans can choose the matchday experience they want - whether that be seated or standing in safe, licensed areas of grounds.”

Peter Daykin, standing co-ordinator at the Football Supporters' Federation, said: “We’d like to thank every supporter who took the time to take part in the ‘Stand up for Choice’ survey, the largest of its kind ever conducted on the issue of standing at football in England and Wales.

“Once again, football supporters have made it abundantly clear that they want the choice between sitting and standing at a match - genuine choice that is provided at horse racing, rugby, music festivals and beyond. We urge the Government to listen to those supporters who, along with clubs and safety experts, want to see reform of the currently unworkable all-seater legislation.”