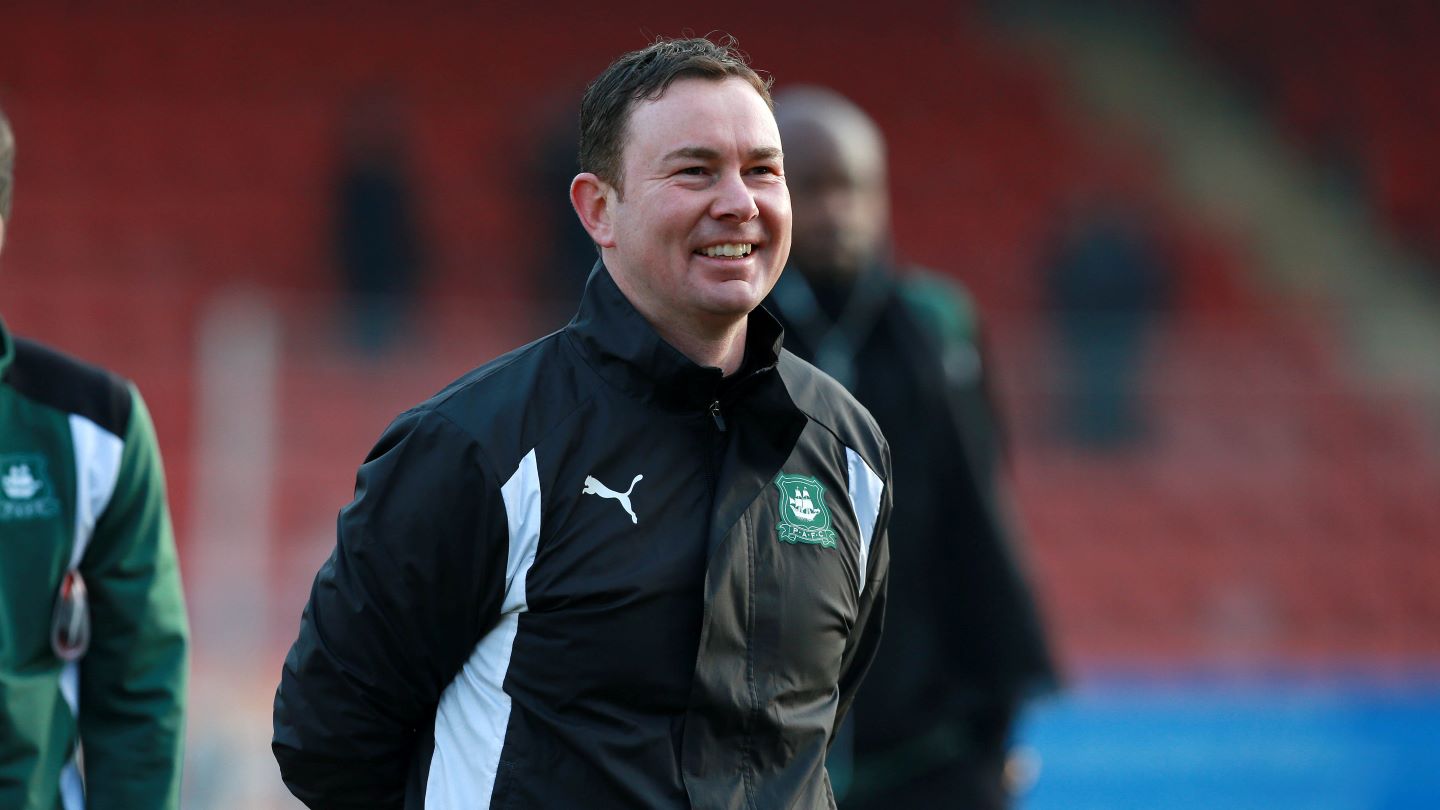 AS we mark the 1,000th day of Derek Adams' tenure as Argyle boss on Wednesday, March 7, we take a look at his reign, broken down into each 100-day section

Following his appointment, Adams began to shake up his squad for the beginning of the season. With crucial first-team players such as Anthony O’Connor and Lewis Alessandra moving on to pastures new, he had to find replacements.

The 2015-16 season began positively for the Greens with a 2-0 victory over AFC Wimbledon , the goals coming from new boys Wylde and Carey. The Pilgrims continued their positive start, picking up 16 points from their first eight league games, securing victories against Carlisle, Northampton, Newport and Wycombe. It was a positive start for the Scotsman with Argyle sitting second in the League table behind Leyton Orient, the only team to have had a better century of days than Argyle

On Derek Adams' 200th day in charge of the Pilgrims, Argyle ran out 2-1 winners away to former Argyle manager John Sheridan’s Newport County, thanks to goals from Ryan Brunt and Jake Jervis. In November, Adams signed Luke Croll on loan from Crystal Palace as centre-back cover to the injured Peter Hartley, and goalkeeper Christian Walton returned to Home Park as a short-term replacement for the injured Luke McCormick.

The result meant that Derek Adams and Argyle would go into the New Year with a three-point lead over Northampton Town at the top of the division. The Greens had picked up 49 points from their first 24 games and had an eight-point cushion over fourth-placed Portsmouth.

With the January transfer window coming up, Derek Adams was in the market to strengthen his squad to push for promotion in the final half of the season.

Following Argyle’s 2-1 defeat to Exeter City on April 2, the Pilgrims slipped back out of the top three on goal difference behind Bristol Rovers. Since the turn of the New Year, Argyle had picked up 25 points from their 16 league matches leaving them looking to catch up with the pack.

Adams made six signings between January-March in an attempt to push back into the automatic promotion places. He re-signed Hiram Boateng on loan until the rest of the season after a positive first spell with the club. He also signed up Jordan Houghton, Jordon Forster, Daniel Nardiello, Jamille Matt and goalkeeper Vincent Dorel.

With only six matches left in the season and one of them against Portsmouth, another team chasing automatic promotion, it seemed a crucial stage of the season for Adams men to step up and reach the top three.

The start of the new season has begun with 11 players leaving the club including first-team regulars such as captain Curtis Nelson, Peter Hartley, Reuben Reid, Ryan Brunt and Carl McHugh, as well as the loan players that had played a crucial part in the promotion push. Unfortunately for the Greens and Adams, it was to be another season in League Two after losing to AFC Wimbledon in the play-off final.

Having completed their pre-tour of Devon and Cornwall, the Greens were ready to set off for their pre-season tour of the Netherlands.

Having just won 3-1 at Newport County the Greens were flying high under the management of Derek Adams with his new players settling in. There had been a few nerves around at the start of the season as Argyle had lost their first three games against Luton, Reading and Carlisle. But the nerves were quickly banished as the Pilgrims remained unbeaten in their next 12 league matches, winning ten and propelling them to the top of the table.

As Derek reached 600 days in the job, the January transfer window was coming to a close and, with Argyle firmly inside the top three, it was looking positive for the Pilgrims' promotion hopes. Derek Adams had recruited well, signing Ryan Taylor, Matty Kennedy, Antoni Sarcevic, Nathan Blissett and Jakub Sokolik to help strengthen the squad for the ru- in, with only David Goodwillie, Karleigh Osborne and Ben Purrington leaving the club.

January had been a special month for Argyle boss Derek Adams and Argyle as the Greens saw off Newport County in the FA Cup second round replay to earn them a tie with Liverpool, at Anfield.

The fairy-tale did not stop there, Adams and his men performed a tactical masterclass at Anfield and became one of only three teams to keep a clean sheet at Anfield that season, along with Manchester United and Southampton. In the replay, Argyle played superbly in front of a packed Home Park to just be pipped 1-0 by Jurgen Klopp’s men.

On Day 600, Argyle lost 2-1 at Yeovil Town, but were still second in the league, five points behind Doncaster Rovers, and nine clear of fourth-placed Exeter City.

On the 700th day since his appointment, Derek was most probably on a well-earned holiday. It was May 11, five days after Argyle had finished the season with a 1-1 draw against Grimsby Town.

The draw meant that Argyle came second in League Two, with Portsmouth's astounding late run meaning they breasted the tape at just the right time.

The Pilgrims had achieved promotion with a 6-1 thumping of Newport at Home Park on April 17. It was also the third promotion of Adams' career having already won promotion twice with Ross County in Scotland.

On Day 800, Argyle drew 1-1 at Southend, meaning the Pilgrims' three league matches so far had yielded a win, a draw and a defeat, the four-point return leaving sitting in an early position of tenth.

It had been another busy summer for Adams as he oversaw nine departures from Home Park, as well as nine incomings. For the second year running, Argyle had been to the Netherlands as part of pre-season preparation, earning a creditable draw with Feyernoord while there.

On Day 898, Argyle lost 1-0 at Portsmouth. It was a second loss in three games, and Argyle were bottom of the League One table. This 100-day section began horrendously, with Argyle succombing to defeat after defeat, but, despite the poor end at Fratton Park, fortunes were beginning to turn for the better.

Even happier news was shortly to come. Long term absentees Ryan Taylor and Oscar Threlkeld were shortly to return to the fold, and although Argyle remained at the foot of the table, three points from safety, things were about to change.

A lot can happen in 100 days. The most recent century of days under Derek's charge may well be the most special. Just one league defeat, to Wigan Athletic - league leaders at the time - saw Argyle move from last place to sixth. The other 14 matches have included 11 wins and three draws, with victories against promotion-seeking sides such as Blackburn, Shrewsbury and Bradford. Argyle have scored in every game since losing to Portsmouth.

On Day 1,000, Derek was nominated for Sky Bet League One Manager of the Month, after winning five from five in Fabulous February, arguably the best month in the club's history.

It will be June 15, 2018, the day after the FIFA World Cup begins, but how long previously will Argyle's season have finished?

Will the Pilgrims' previous game have fallen on May 5, as the regular season drew to a close? On May 27, the date of the play-off final? Or perhaps somewhere in between.

The next 100 days in Derek Adams' reign will prove to be vital as to whether the Pilgrims can clinch a play-off place and gain promotion to the Sky Bet Championship for the first time since 2010.