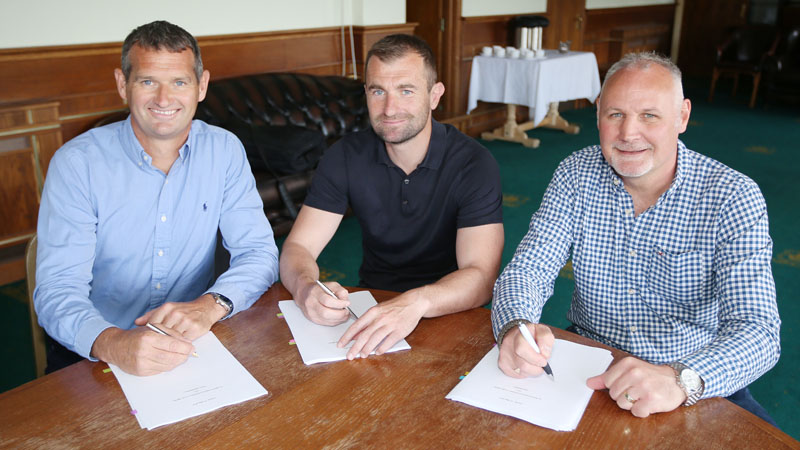 A Life in Green

The 40 year-old Plymothian has been promoted to Derek Adams’ right-hand man at Home Park after serving as first-team coach for the past four seasons, initially under previous manager John Sheridan.

Wottsy has agreed a two-year deal to continue his long association with the first-team that began in 1995, when Steve McCall handed him his playing debut at Shrewsbury Town.

That was the first of 491 senior appearances for the Pilgrims – second on the all-time list to Kevin Hodges – during which time he captained the club to two promotions, in 2001-02 and 2003-04.

Filling Wottsy’s previous role as first-team coach will be another Argyle fan who became a player with a long association with the club: Kevin Nancekivell has also agreed a two-year contract to be part of Derek’s staff.

Nance, 46, played for the club in 2000 before becoming a Centre of Excellence coach when he retired from playing, rising to the position of first-team coach under Carl Fletcher’s management.

He returned to the Argyle Academy when Carl Fletcher left his position as manager and eventually became Head of Academy Coaching after obtaining his UEFA Pro Licence.

A third former Pilgrim player has been added to the full-time first-team Home Park roster, with goalkeeping coach Rhys Wilmot’s role being upgraded from part-time status. He, too, has signed two-year deal.

Rhys, 56, represented the Pilgrims 147 times between 1989-1992, after signing from Arsenal. Only the arrival of Peter Shilton as Argyle’s player-manager prevented the popular Welshman from significantly extending his Home Park career.

Argyle manager Derek Adams said: “I am very pleased to have my coaching staff already in place for next season.

“Paul, Kevin and Rhys are good coaches, with qualities that have proved and will continue to prove valuable for the club. They also have a long association with Argyle.

“We are already preparing hard for the new campaign and are all looking forward to it.”