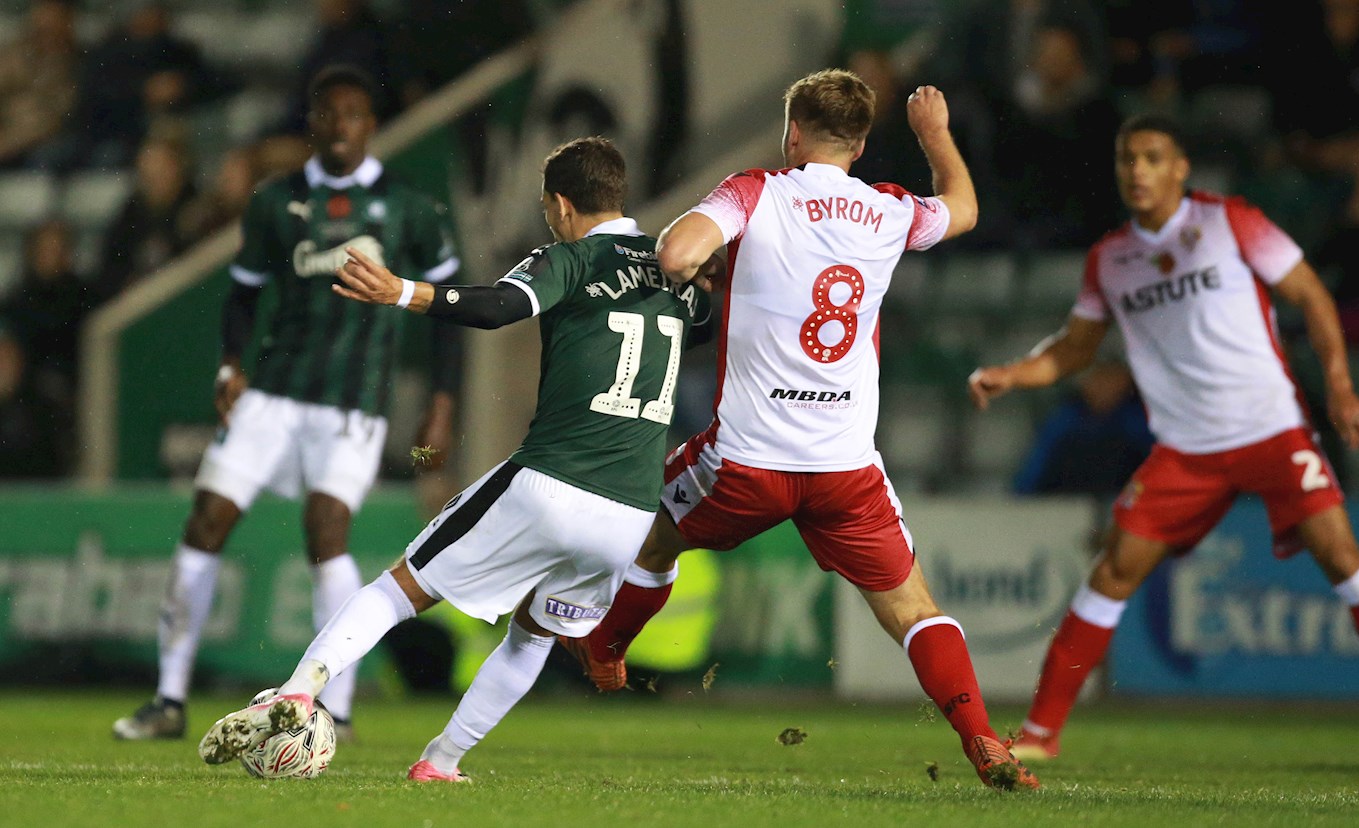 ARGYLE boss Derek Adams hailed the performance of his side in the Emirates FA Cup victory over Stevenage from Sky Bet League Two, thanks to a late winner from Ruben Lameiras.

Boro held on until the fourth minute of 10 added on in the second period, following an injury to Steve Seddon, who received lengthy on-field treatment. Despite feeling the scoreline should have been far more, Derek gave credit to a Stevenage team that remained strong throughout.

Lameiras emerged from the bench to replace Jamie Ness, who made way for the Portuguese midfielder in the 55th minute, a change which was in the pipeline, but happened sooner as Jamie picked up a calf strain.

“We are delighted to be in the next round,” said Derek. “With the performance over the 90 minutes, we deserve to be.

“The chances we did create over the 90 minutes were very good. We probably should have been ahead in the game in the first half. We had a number of chances through Joel Grant, Graham Carey and Freddie [Ladapo], but in the end we had to use Ruben off the bench to get us that victory.

“They [Stevenage] were resolute, they worked ever so hard as a team and came here to try and frustrate us, which is always going to be the case when you come away from home and you are a club from the lower division. They did that well.”

“He [Ruben] is one that can start in the starting 11 or come off the bench. At this moment in time, he has found himself an important player for us because he can change direction very quickly, he can open up defences and he can score goals.

“When we had the long injury lay-off, it gave us an opportunity to get the goal; we were still creating a number of opportunities. We probably didn’t pick the final pass at times, or it’s good defending by Stevenage.”

Ruben’s tie-settling goal came after Graham Carey cut in off the right-hand side, something he did constantly throughout the match.

Derek said: “I’m delighted because, on any day, Graham can take on full-backs. He was going inside and outside of the full-back. They did have to double up at times and he was still able to get past them.

“From his point of view, he will be delighted with his performance.”

Looking ahead to the draw for Monday night’s second round draw, the manager would like a similar tie.

“We do a lot of travelling throughout the season, a home tie would be hugely beneficial,” said Derek.