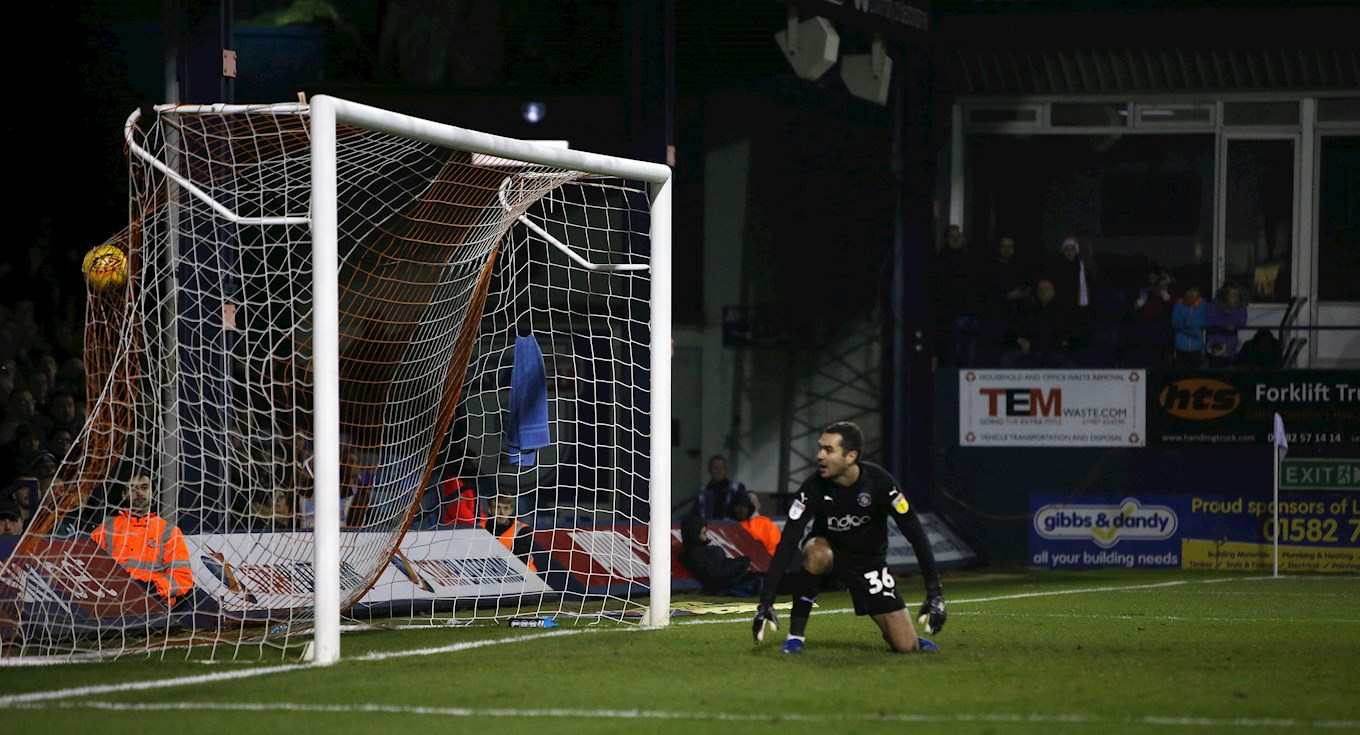 THE Pilgrims’ 12-year six-game unbeaten run at Kenilworth Road came crashing to a halt in spectacular fashion as they were brushed aside by a rampant Luton side that racked up a ninth win from their 11 home games.

The destination of the three points was decided in an opening 45 minutes in which Argyle found no resistance to the home team’s slick attacking.

James Collins top and tailed the Hatters’ four first-half strikes, the second from the penalty spot, between efforts from Elliot Lee and James Justin.

Argyle fared better in the second half but were unable to prevent Luton adding to their haul as Collins completed his hat-trick before leaving the field to a standing ovation. In his previous game against Argyle, he had left in disgrace, red-carded while playing for Crawley.

Joel Grant had the final word with a strike that, on another day, might have had you waxing lyrical, but which barely seemed to matter.

Argyle manager Derek Adams had been obliged to make a change to the settled line-up that had won three out of the previous four league and cup matches, with performances to match.

Conor Grant, whose inclusion at left-back in place of the injured Ashley Smith-Brown had coincided with the rise off the bottom of the table and into the second round of the FA Cup, was injured, so Smith-Brown returned.

The former Manchester City man thus became the only Pilgrim to start in the midweek Checkatrade Trophy group game at Newport County in the previous midweek and at Kenilworth Road, although several other Pilgrims on parade in Wales were on the substitutes’ bench, notably Ryan Taylor and first-year professional Ryan Law.

Luton, playing a diamond midfield, looked to get the ball out wide from the off and Harry Cornick had already forced Matt Macey into a save at his near post when Collins fired them ahead.

Lee, brother of former Pilgrim and ex-Hatter Olly, drove towards goal before offloading to overlapping left-back Justin, whose low cut-back was swept home by Collins.

The home side probably did not need a boost to a collective confidence bordering on sky high after six wins and two draws from their previous eight home league games, but the goal gave them one.

Argyle, though, hung on and appeared to have weathered the storm when they were caught on the break, this time on their right-hand side, where Andrew Shinnie provided them with a man over.

Macey saved Cornick’s shot but could only palm the ball into the centre of his six-yard box, where Lee was on hand to convert a comfortable finish.

Six minutes later, the Pilgrims went further behind. Shinnie and Cornick combined again, with the later just beating the offside flag to cross for Justin to convert.

Argyle responded by sending on Taylor in place of Ness and matching Luton’s diamond, with the Argyle No.9 joining Freddie Ladapo up front.

The move appeared to stem the tide but the Pilgrims suffered a further blow just before half-time, when referee Darren England awarded a penalty, apparently for a foul by David Fox. Collins converted the opportunity.

Argyle rejigged at the break, bringing on Stuart O’Keefe for Ladapo and pushing Joel Grant further forward. O’Keefe’s desire to at least partially rectify wrongs resulted in a yellow card seven minutes and three fouls after coming on.

With the game long since gone, all eyes were on the Pilgrims’ character and there was enough of that on show in the lost cause.

Taylor was twice denied by goalkeeper James Shea either side of teeing up Graham Carey for a shot which the midfielder lifted over the crossbar.

Carey was also booked, collecting his fifth yellow card of the season and earning a ban which rules him out of next week’s home game against Fleetwood Town.

Luton went further ahead when Collins completed his hat-trick after being played in by Lee before Joel Grant’s late riposte for the Pilgrims.