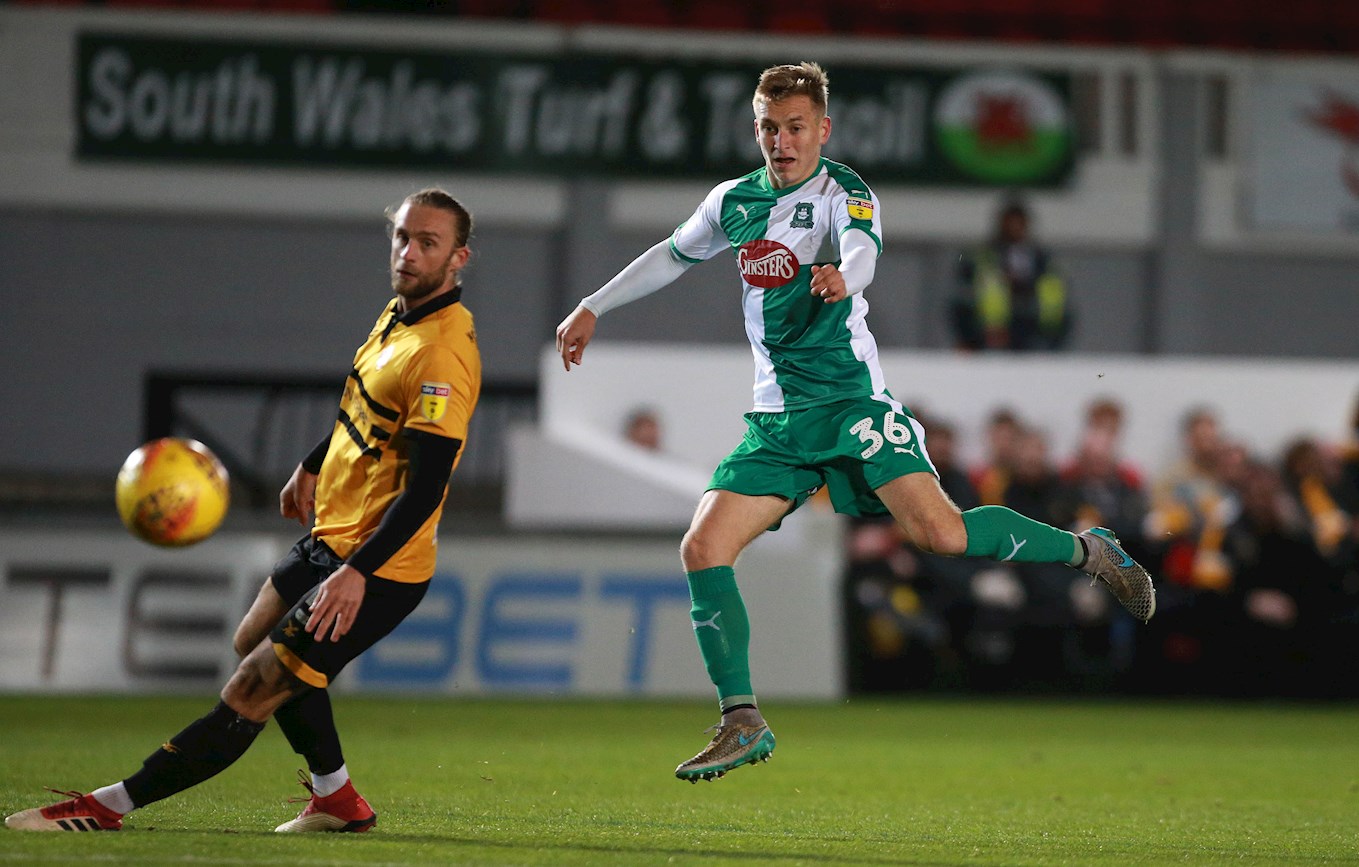 ARGYLE bowed out of the Checkatrade Trophy with more than one eye on the future, as Newport qualified for the knockout stages of the competition at the expense of Swindon Town.

Late first-half goals from Antoine Semneyo and Mark Harris saw County defeat a Pilgrims side that contained none of the side that had progressed through to the second round of the Emirates FA Cup three days earlier, nor match-winning substitute Ruben Lameiras.

Five of the seven substitutes that did duty in the 1-0 home victory over Stevenage the previous Saturday were promoted to the Pilgrims’ starting line-up, including back-from-injury Ryan Taylor, who was the only player in the entire squad that wore a number from the traditional 1-11 assigned, in days gone by, to a starting line-up.

It was Taylor’s first start since the opening home game of the season, back in mid-August.

The squad included four other second-year apprentices from the Argyle Academy, as well as another first-year professional in goalkeeper Michael Cooper.

The inexperience on the substitutes’ bench could be gauged by the fact that the aggregate of the players’ ages was considerably less than half of their combined shirt numbers.

Newport made, by comparison, a conservative five changes from the side that had arrested Metropolitan Police’s FA Cup progress at the weekend, one of which was to relegate ex-Pilgrim Jamille Matt to the substitutes’ bench.

The Pilgrims made a start that was more than encouraging. Taylor went close to opening the scoring inside the first five minutes when he headed over Lionel Ainsworth’s left-wing corner to the near post, and Battle fired off a shot that was deflected for another corner.

Those were mere appetisers for Gregg Wylde’s sumptuous drive from about 30 yards that left County goalkeeper Nick Townsend flat-footed and grateful that Wylde’s radar was off by only inches as the ball clattered against the inside of the post.

It took until midway through the first half for the home side to threaten the Argyle goal, with Dan Butler stealing in at the far post to volley Robbie Willmott’s free-kick over the bar.

The opportunity seemed to give County belief and, after Harris had fired into the side-netting, Semenyo gave them the lead.

The slightest slip by Peck allowed the on-loan Bristol City striker to make strides into the penalty area and fire past Argyle’s only Welshman, Kyle Letheren, possibly with the aid of a deflection.

Argyle narrowly failed to make it back to the castle-themed dressing-room without conceding a second, Harris heading home Willmott’s cross from the right past an exposed Letheren.

County, holding ‘the most dangerous lead in football’, had no need to jeopardise their qualification against opponents playing just for pride and limited their main chances to set-pieces, with Butler and Mark O’Brien heading over the goal.

Argyle kept plugging away, urged on by a bench whose vocal input suggested they were very much taking the game seriously, doing the right things but making little headway against opponents who were happy to hold what they had.

The game was long since over when Purrington followed in big brother Ben’s studmarks and became the fourth debutant of the evening, as well as the 1,090th player to represent the Pilgrims in a first-team game.

Argyle, though, finished with something of a flourish as Wylde hit the frame of the goal for the second time, loosing off with his right foot from the edge of the area.