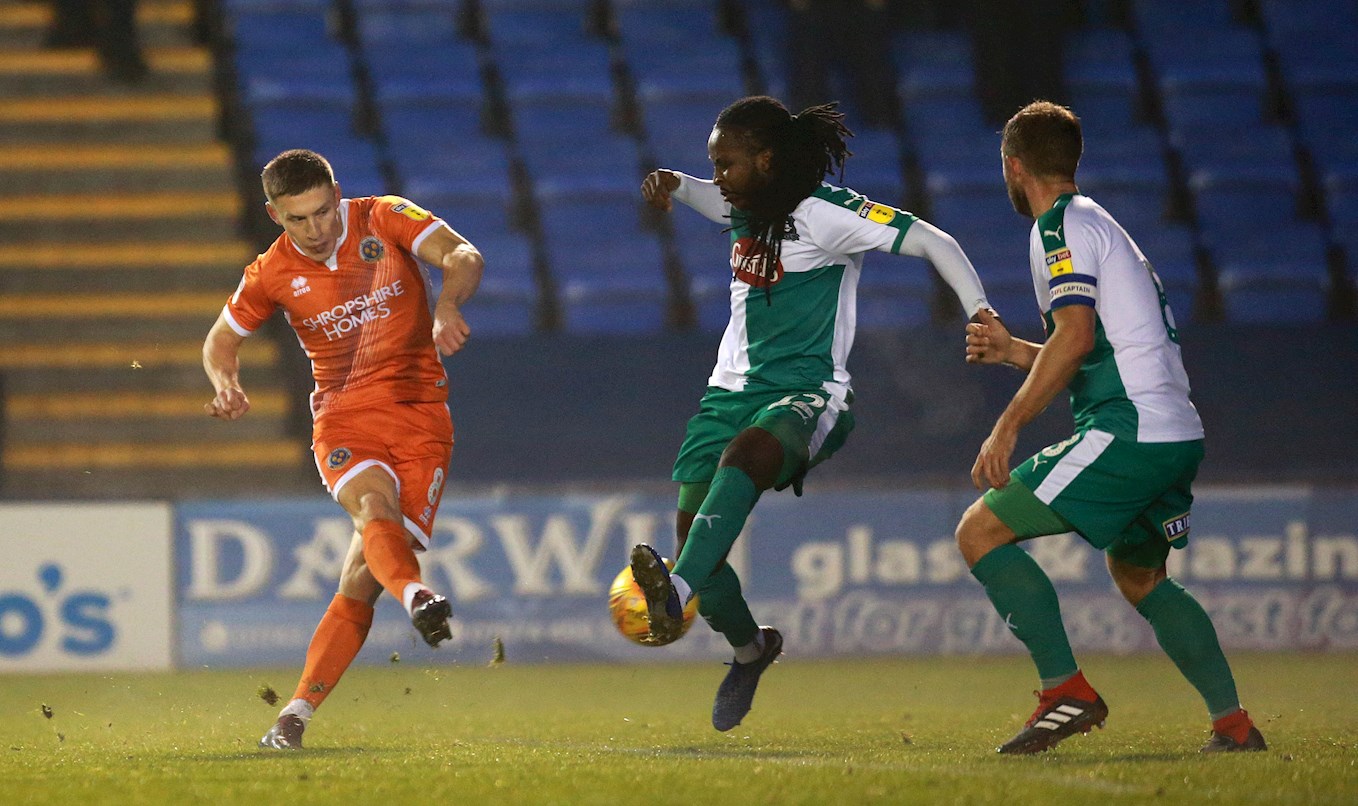 ARGYLE’S stop-start season continued as the Pilgrims failed to build on the momentum given them by Saturday’s fine home win over Fleetwood Town.

Despite enjoying the better of the first half in Salop, they went into half-time trailing to on-loan Rangers midfielder Greg Docherty’s strike ten minutes before the break.

Argyle could not find similar momentum in the second 45 minutes and fell further behind midway through the half when Fejiri Okenabirhie hit them on the break.

The Pilgrims went into the game with a starting 11 unchanged from that which had done duty at Home Park three days earlier.

Manager Derek Adams' decision to begin with the same team meant no quick return for midfielder Graham Carey, who missed the 2-1 win over the Trawlermen through suspension.

Carey had to be content with a place on the substitutes' bench as Ruben Lameiras continued in support of ten-goal Freddie Ladapo, who had a loan spell with Shrewsbury two seasons ago.

Another ex-Shrew, Antoni Sarcevic, also lined up for Argyle, while a third former Town player, Joe Riley, whose final game for the Shropshire side was in last season's League One play-off final, started on the bench.

Shrewsbury showed one change from the 11 that had lost for the first time under the caretaker-management of goalkeeping coach Danny Coyne when they went down 3-2 at Wycombe Wanderers at the weekend.

Their starting line-up included former Pilgrim Ollie Norburn, who played 19 times under John Sheridan in the 2014-15 season and has since represented Guiseley, Macclesfield and Tranmere before racking up at Montgomery Waters Meadow, where he scored four goals in his first 15 appearances.

Despite playing, for sponsorship reasons, in their away kit, Shrewsbury did what home sides are expected to do and started at a great lick. Argyle, though, did what away sides are required to do and soaked it up fairly easily before responding.

The midfield seized on an error and, before you could say ‘Freddie’, Ladapo was on the ball in a flash. He was forced slightly wide on the right but still managed to get off an on-target shot that goalkeeper Steve Arnold pushed into the side-netting.

The first half followed a familiar pattern, with Argyle allowing Shrewsbury possession where it did not hurt and then breaking on them with slick passing.

Pilgrims’ goalkeeper Matt Macey was relatively untroubled, and the efficacy of Argyle’s tactics could be gauged that the most concern he was given came from centre-back Luke Waterfall’s long-ranger, which was so powerful that he dropped the ball with Aaron Holloway and Fejiri Okenabirhie sniffing for titbits.

Ladapo was a constant menace to his former employers, sitting on the shoulder of his markers and waiting for his team-mates to find his little darts hither and thither.

That happened when Lameiras managed to wriggle some space in the congested midfield and poked the ball through. Ladapo was on the astute pass in a flash and angled his shot across Arnold. When it left his boot, it was arrowed to the far corner of the goal, but it curved slightly in flight and scraped by the wrong side of the post.

Reprieved, Shrewsbury made Argyle suffer further ten minutes before the break, when Docherty, who had looked like the Shrew most likely to make a difference in the opening 45 minutes, cut in off the Argyle right and smashed a low shot across Macey.

Only a remarkable save from Arnold prevented the Pilgrims from going into half-time on terms. The Shrews’ goalkeeper somehow managed to push the ball over his crossbar after Lameiras’s low hard drive had been deflected towards goal by a defender.

That was the last action seen by Lameiras, who made way for Carey at half-time. At the same time, Ryan Taylor came on for Joel Grant to form a front two with Ladapo.

The change of personnel was accompanied by a change of system. Whether one or the other, or a mixture of both, or something else altogether, the Pilgrims could not get their game together and, with Shrewsbury in a similar vein of form, the game became bogged down in a midfield morass.

That ended when Shrewsbury put together what was not so much the best move of the half as one of the few cohesive ones from either side, which ended with Okenabirhie steering the ball past Macey.

The Pilgrims increased their complement of ex-Shrews on the pitch by bringing on Riley for Tafari Moore and his arrival coincided with the Pilgrims’ most productive and settled part of the second half.

The game, though, was too far away from them to pull back and Shrewsbury slotted in, and, appropriately, given their match attire, played like an away team and comfortably countered the Pilgrims’ best efforts.