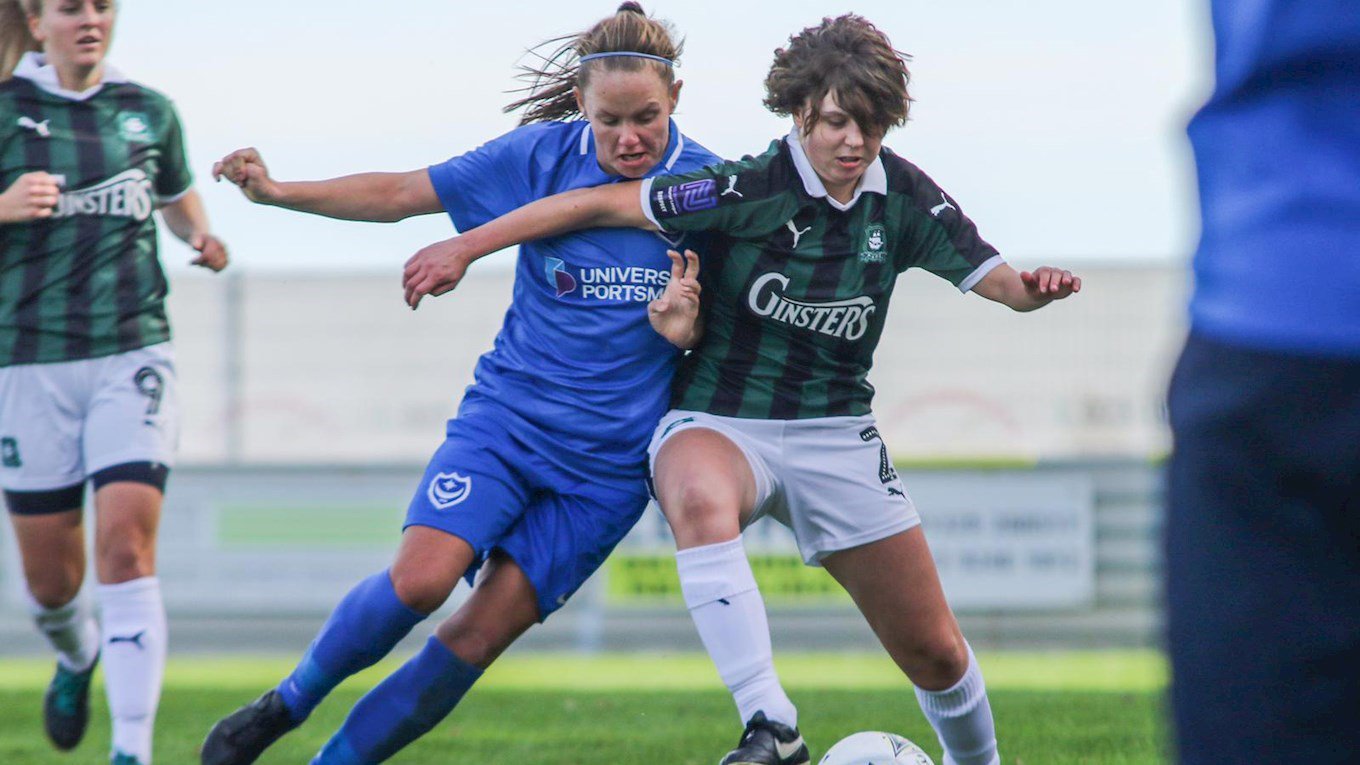 ARGYLE Ladies returned from Hampshire with the Dockyard Derby bragging rights following an impressive performance to move into third place in the National League Southern Division.

The match was a great one for England Under-20 international Jessica Jones, who helped herself to a brace, as well for the team, who kept their first clean sheet of the season.

Portsmouth flew out of the blocks and, for the opening ten minutes, pressured the Argyle defence, who stood firm. Once they settled and everybody got on the ball, Argyle started to press high and the decision worked when Portsmouth goalkeeper Robyn Levett was forced into playing a weak clearance to Danielle Rowe. She was dispossessed by Jones who promptly let fly into the net.

The goal settled Argyle, who started to move the ball around, causing the Portsmouth players to make rash challenges. From one of those challenges, Argyle doubled their lead. A 38th-minute Zoe Cunningham free-kick following a foul on Helen Bleazard ended with Kayley Lane ghosting in to avoid the offside trap to score with a diving header.

The second half carried on in the same vein as the first, with Helen Bleazard having a shot well saved and Cunningham firing over after being put through by Becky Dandridge.

Portsmouth then started to play the ball long but Argyle clinched the three points when, five minutes from time, a triangle move between Cunningham, Darcey Hepworth and Dandridge ended with Cunningham sending over a pinpoint cross that was met with a diving header from Jones.

Beck came on for the tiring Lane in midfield with Cornish teenager Faye Ivall replacing Dandridge. What pleased Rodd was that this was Argyles fourth win on the road as well as keeping a clean sheet. Saying: 'To see at the end of the game the beaming smile of goalkeeper Rogers was priceless.'

It was an emotional game for captain Kate Middleton. The skipper tweeted: "After one of the hardest days of my life yesterday, losing my amazing granddad, today I am so proud to captain an amazing bunch of girls. It feels so good for us to get our first clean sheet of the season after every player gave 100% for the cause. That one's for you granddad."

Argyle's Development team returned from East Devon with a valuable point to deny Alphington from extending their 100% winning record, and the youngsters can be thankful to goalkeeper Amy Darnley for a game-saving second half performance.

In the early stages, it looked to be going Argyle's way but it was Alphington soon stamped their authority on the game and the Pilgrims were made to pay when Sophie Simpson was afforded too much room inside the penalty area to fire off an unstoppable shot into the roof of the net.

Gabi Alphous shot wide and Maya Ridge had an effort that arrowly clearing the crossbar before Argyle equalised ten minutes before half time. An Alphous cross was handled by a defender inside the penalty area and Alex Hugh stepped up to confidently convert the spot-kick.

Argyle continued to struggle in the second half and they had to be grateful to Darnley for keeping them in the game. Three times the Argyle 'keeper dived at the forwards' feet before Jodie Randall then came to the Greens' rescue with a fine goal-line clearance.