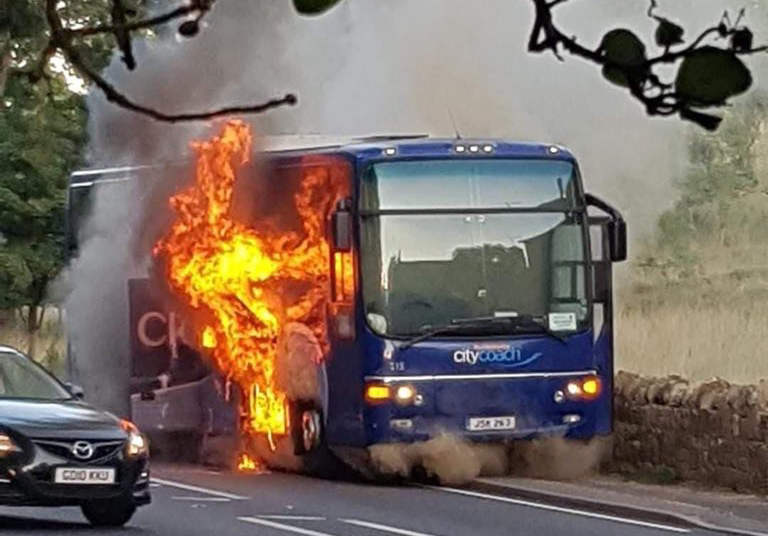 ARGYLE are offering free travel to members of the Green Army caught up in Saturday's supporters' coach fire on the way back from Portsmouth.

The 49 fans will also be reimbursed for personal items damaged in the fire, and for expenses that they occurred while they waited for a replacement vehicle.

Supporters were forced to evacuate Travel Club Coach No.2 when it caught fire near Deptford, Wiltshire, on the A303, an hour and a quarter into their return journey from Fratton Park.

Thanks to the guidance of the Citycoach drivers and the calmness of supporters, no-one was hurt, and a replacement coach was quickly sent out to bring the fans home.

Those supporters are now being given the chance to claim free travel to a future Argyle away game of their choice. Citycoach have also agreed to recompense fans for the food and drink which they ate in a Little Chef while waiting for the replacement coach, and to replace items damaged by fire or water on a like-for-like basis.

Argyle Chief Executive Michael Dunford said: “We thank the Green Army for their understanding and regret the inconvenience which they suffered on the way back from Portsmouth.

“We are grateful to the coach drivers for their prompt and professional handling of the incident, and we thank Citycoach for looking after our supporters on the day and since.

“We have had a lot of extremely complimentary feedback from the fans involved.”

Paul Grace, General Manager, Coaching, at Plymouth Citybus Ltd, said: “The main thing is that everyone was safe and eventually they all got home, a little late, but safe. Everyone was sensible and reacted well in the situation.

“So there were lots of positives from what was quite a dim day all round.

“A full investigation will be carried out to see what caused the fire and whether any remedial action should be necessary.”

When that investigation is complete, the club will let supporters know the results.

The free travel offer begins with our game at Charlton Athletic on Saturday, September 22 and can be used that match at the Valley or any away game this season after that. Supporters should call or visit the Home Park Ticket Office when tickets go on sale for their game of choice to make the necessary arrangements.

The free travel offer also extends to supporters who were on board the coach which suffered a puncture on the way back from the recent Carabao Cup tie at Millwall.

They, too, should contact the Home Park Ticket Office from next Tuesday, September 11.