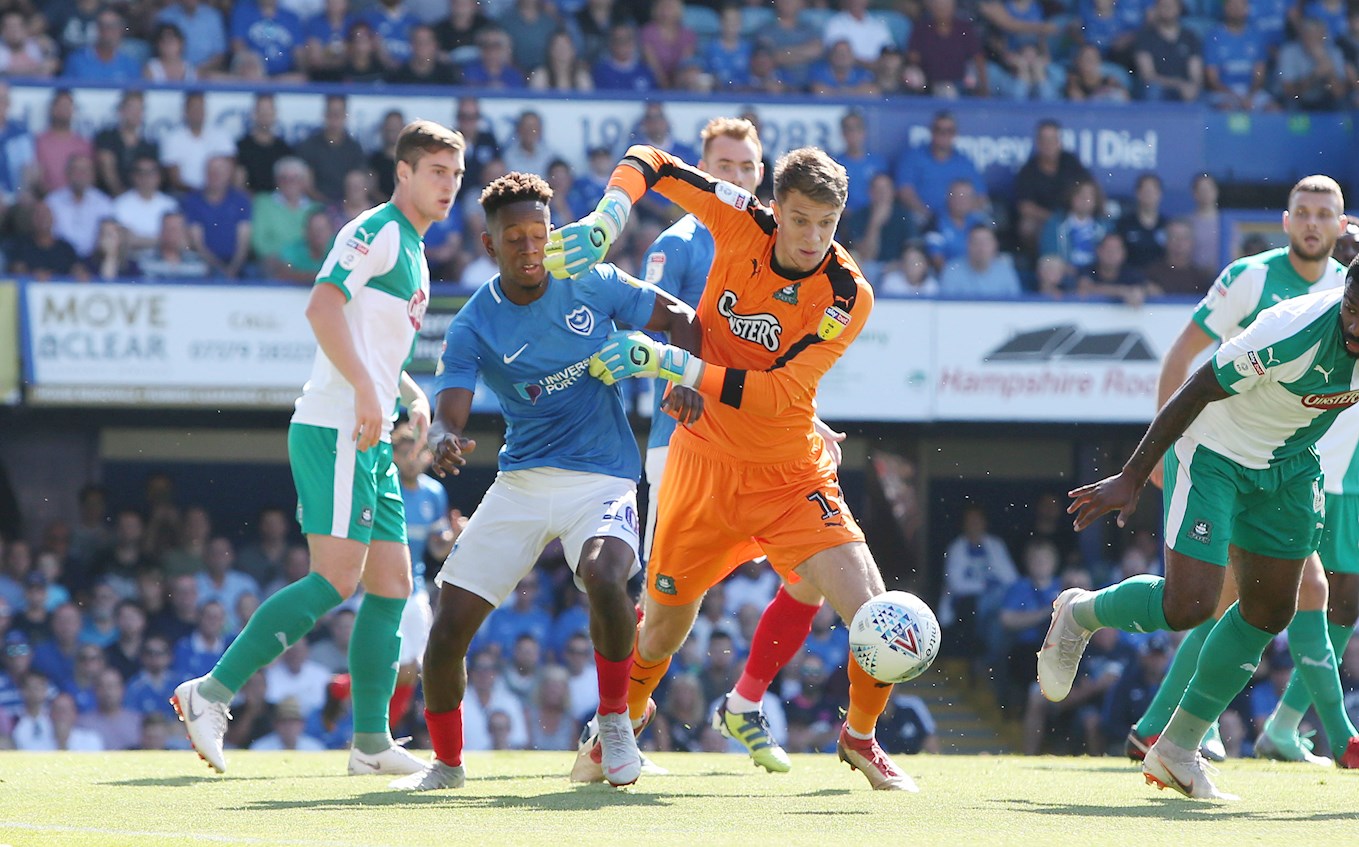 Match report for Portsmouth vs Plymouth Argyle on 01 Sep 18

THE 104th Dockyard Derby went the way that the formbook and Sky Bet League One table suggested it might as Portsmouth extended their unbeaten run in the series to three.

Ronan Curtis, Portsmouth’s £100,000 capture from Derry City, has already proved to be money well spent, and the player identified by Argyle manager Derek Adams in the build-up to the game as a danger was more or less the difference between the two sides.

The Irishman scored twice and laid on the second goal for Jamal Lowe to leave the Pilgrims still searching for their first league win of the season.

Argyle will point to the minute midway through the first half when they were denied what looked a certain penalty, a mystery that was still troubling them when Curtis slotted home his first goal. On such moments seasons can be defined.

Adams had shown faith in the same starting 11 that pushed Championship Millwall all the way to the final minute of their midweek Carabao Cup tie, although Gregg Wylde, a late substitute in London, was omitted from the squad in favour of Ruben Lameiras.

It was testimony to the gaffer's belief in, not only his players’ abilities, but also in their powers of recovery after an away game played on a Wednesday. Following the final whistle of their second-round match, the squad had travelled back to Plymouth, arriving at 4am on Thursday; trained the same afternoon and the following morning; and then endured a six-and-a-half hour Friday afternoon coastal trip to Portsmouth.

The home side had no such concerns, having suffered their only defeat this season, at home to AFC Wimbledon, in the first round of the Carabao Cup.

They were unable to include late loan signing from Wolverhampton Wanderers, Joe Mason, the Pilgrims' Academy graduate and (presumably now formerly) one of our own, but named another loan player, Aston Villa's Andre Green on a strong substitutes' bench that also included Brett Pitman and David Wheeler.

Like Argyle's, their initial line-up was same again, with manager Kenny Jackett sending out the identical players who had drawn 0-0 at Doncaster Rovers seven days earlier as Portsmouth dropped points for the first time this season.

Although Argyle’s midfield contained the same personnel as at Millwall, there was a subtle tweak to their roles. Yann Songo’o again patrolled in front of the back four, but Antoni Sarcevic and Jamie Ness were encouraged to get forward to press Portsmouth’s holding pair of Ben Thompson, and Tom Naylor.

Nevertheless, neither goalkeeper was obliged to exert himself until, following several only half-attempts by the Pilgrims to clear their lines, self-confessed Argyle loather Gareth Evans  - now Pompey’s captain - lashed a shot from distance that a flying Matt Macey tipped over the crossbar.

Portsmouth then got away with one when Freddie Ladapo latched on to a lob forward from Songo’o, launched more in hope than expectation. The in-form Argyle striker won the race to the ball with goalkeeper Craig MacGillivray and lifted the ball over the custodian, who clattered into Ladapo, preventing him from continuing his run. A penalty 24/7/365.

Not, unbelievably, according to rookie referee Tom Nield, whose future in the game is going to be an interesting one if he continues to make decisions like that one.

Inevitably, Portsmouth immediately scored, breaking quickly through the always dangerous Lowe, who drew Macey before slipping the ball into the stride of Curtis, who could not miss, and did not.

The potent one-two of a let-off followed by a goal gave a rampant, confident Portsmouth a fillip that they barely needed, but served to oil the wheels of their quick breaks, one of which ended with Macey making a fine save after Evans had engineered a shot for Oli Hawkins. It was the last meaningful contribution from Hawkins, who later limped off with what looked like a hamstring problem.

Argyle regrouped and continued to probe and press, with Stuart O’Keefe, making his Argyle EFL debut against the team for who he played last season, getting in between then lines to good effect.

Ness and Sarcevic, too, found room to threaten the Portsmouth goal, with the former firing off a left-foot shot from the edge of the penalty area which MacGillivray tipped over, and the latter linking up with Ladapo to drive into the box before being baulked.

Argyle continued to move towards the interval in the ascendancy. Ness’s cross from the left was cleared away from O’Keefe for a corner, from which the Pilgrims won successive scrappy possession before Gary Sawyer, of all people, hooked a shot over the crossbar.

Both sides made two substitutions at half-time. Argyle brought on Graham Carey and Lameiras for Songo’o and Conor Grant, and switched to 4-3-3, while Portsmouth played out their hand by introducing Nathan Thompson and Christian Burgess.

The change of personnel and shape to that resembling the one which served so well for most of last season immediately resulted in Argyle looking like the team that had played so well last season: more possession, slick passing, greater ground gained.

Portsmouth were restricted to long, untroubling, shots from Naylor and Curtis, while Carey drifted wide to find space, cut in and fired a shot against the post.

The home side dug in and responded in devastating fashion, with a goal that owed nothing to referees or individual errors: a cross from Curtis on the left, high enough to clear Macey and weighted perfectly to find Lowe coming in at the far post to head in from an acute angle.

Argyle's goose was well and truly cooked when Carey then gave the ball away in midfield. Curtis showed power to outmuscle Sawyer; pace to drive on into the penalty area; and finesse to clip the ball past Macey from a tight angle.

It completed the biggest win for either side since the Pilgrims won by the same score at Home Park in November 2014, ten close games previously.