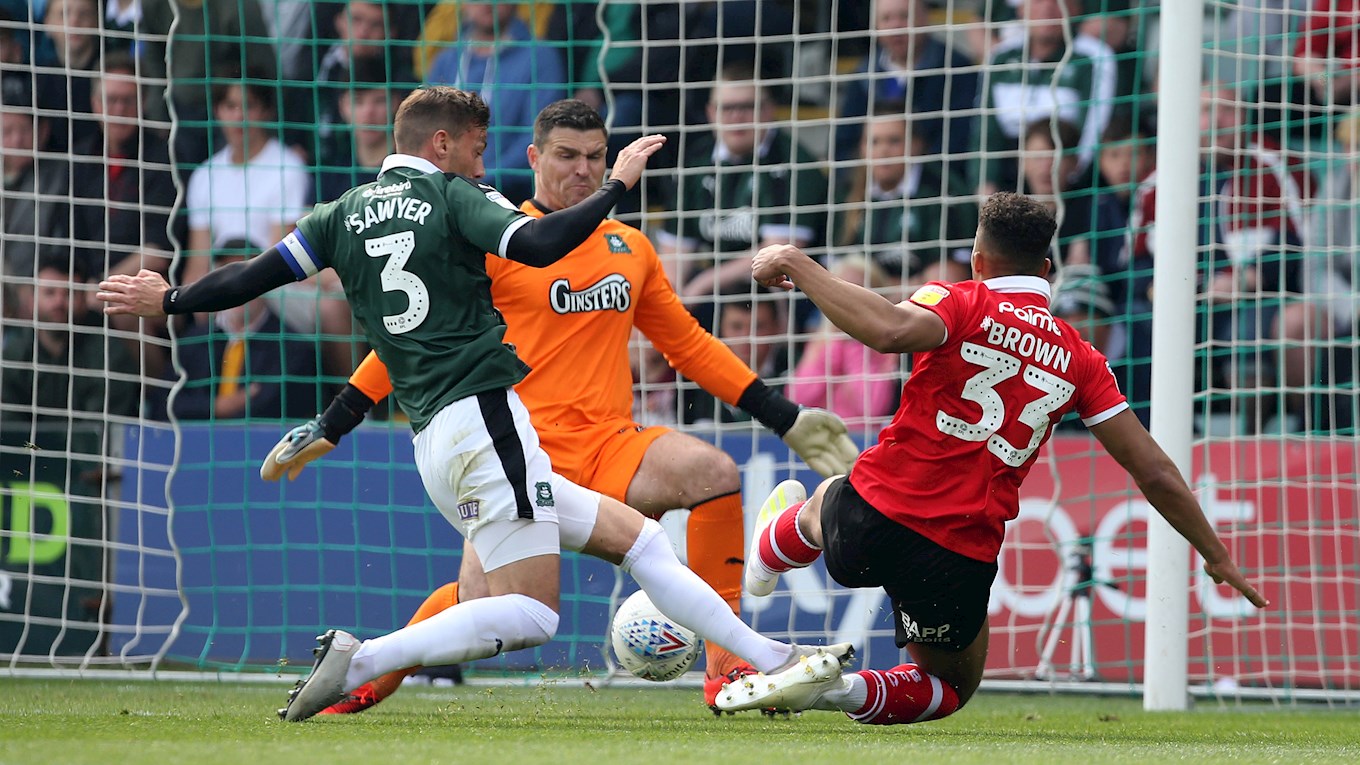 A FIRST-HALF blitz from high-flying Barnsley condemned Argyle to defeat in their Easter Monday encounter at Home Park.

Three goals in thirteen minutes from Cauley Woodrow, Jacob Brown and Alex Mowatt effectively killed the tie in the first half-hour in Devon, sending Barnsley back into the automatic promotion places in Sky Bet League One.

The Greens approached a nervous Easter Monday fixture looking for a change in fortunes, after slipping to 3-1 defeat against Gillingham on Good Friday. Pilgrims manager Derek Adams made three changes to the side who lost out in Kent, bringing in the returning Oscar Threlkeld for Ashley Smith-Brown, and Yann Songo’o for Jamie Ness.

The big surprise, though, was the omission of 18-goal top-scorer Freddie Ladapo, whose injury ruled him out of an Argyle competitive squad for the first time in his career. Ryan Taylor, raring for a first-team opportunity, replaced him.

Meanwhile, promotion-chasing Barnsley approached kick-off at Home Park knowing that they had fallen out of the League One automatic promotion places, following Portsmouth’s early kick-off victory over Coventry. Manager Daniel Stendel made one change to the side that edged out Shrewsbury on Good Friday, with Liam Lindsay returning to the starting eleven in place of Adam Jackson.

In many ways, the Pilgrims’ starting line-up was reminiscent of the side that surged towards the play-offs at the tail-end of last season, with Lloyd Jones, making his full home debut, the only player from this season’s signings to merit a starting place. A performance full of the character, grit and never-say-die spirit that epitomised that run would be required if they were to unsettle the promotion-chasing Tykes.

The opening exchanges were as cagey as you would expect, given what was at stake, but it was the visitors’ who stung the hands of Kyle Letheren first. A long-ball downfield was cut out by Jones, and Cauley Woodrow drove the second-ball at goal from distance. The Pilgrims responded with their own route-one attack, which resulted in Graham Carey firing tamely at Adam Davies with his weaker right foot.

In a tale growing all too regular this campaign, the Greens fell behind on the counter. Once again adopting a direct approach, Barnsley full-back Jordan Williams played a superb through ball from his own half, which sent Woodrow in behind. Woodrow took the ball in his stride with a sublime touch and navigated the ball past a sliding Threlkeld and into Letheren’s far corner.

Argyle mounted a swift response, and neat play in the midfield released Antoni Sarcevic down the left. The midfielder stepped inside and found Ruben Lameiras in space. The Portuguese offloaded the ball for the onrushing Songo;o, who curled the ball a matter of inches wide of Davies’ left-hand post.

Things would get worse for the Pilgrims before the game was even a quarter old, as a pitch in behind once again proved effective. Mamadou Thiam’s sweeping ball from the left flank found Jacob Brown with all the freedom he needed to tuck the ball past Letheren for 2-0 amid protest from players and Green Army alike about an offside call that never came.

The tie was effectively put to bed on 28 minutes, as Referee Stephen Martin adjudged Lameiras to have handled Mowatt’s delivery on the edge of the area. Mowatt stepped up to take the resultant set-piece and curled it emphatically into the top corner.

At this stage, the visitors were wearing the confidence of a side with a three-goal cushion, but Argyle did their best to reduce the arrears. A lovely cross-field ball found Lameiras on the right flank, and the Portuguese stepped past his marker before seeing his drive deflect off Liam Lindsay, and away from ‘keeper Davies, only to brush the bar on its way over. It pretty much summed up a first-half’s fruitless toil for Argyle.

The second-half began as the first finished, with Barnsley happy to hold the Pilgrims at arm’s length with a three-goal cushion intact. The closest Argyle got in the opening stages of the restart was a half-chance header from Jones after a David Fox free-kick, while the visitors threatened through Thiam, who tested Letheren’s resolve twice.

The Greens carved out their best opportunity of the second-half through the unlikeliest of candidates, Songo’o. The Cameroonian collected the ball in the centre-circle and drove forward at a retreating Barnsley back-line, before sliding Lameiras in out wide. The forward took a touch and returned the ball to Songo’o, central in the penalty area, whose strike was well-saved. At the other end, Letheren saved well from Mike Bahre to deny the visitors a fourth.

It should have been four, though, before time, when Edwards was dispossessed by substitute Callum Styles on the goal-line, with two Barnsley players to aim at in the centre. He found another substitute, Kieffer Moore, who struck wastefully wide. Soon after, Letheren denied McGeehan from similar range, before Moore struck off-target again.

By this point, though, many Green eyes inside Home Park were looking down at their screens to check results elsewhere in Sky Bet League One.

The bottom line is this:

With two games to go, Argyle’s destiny is still in their own hands, just about.