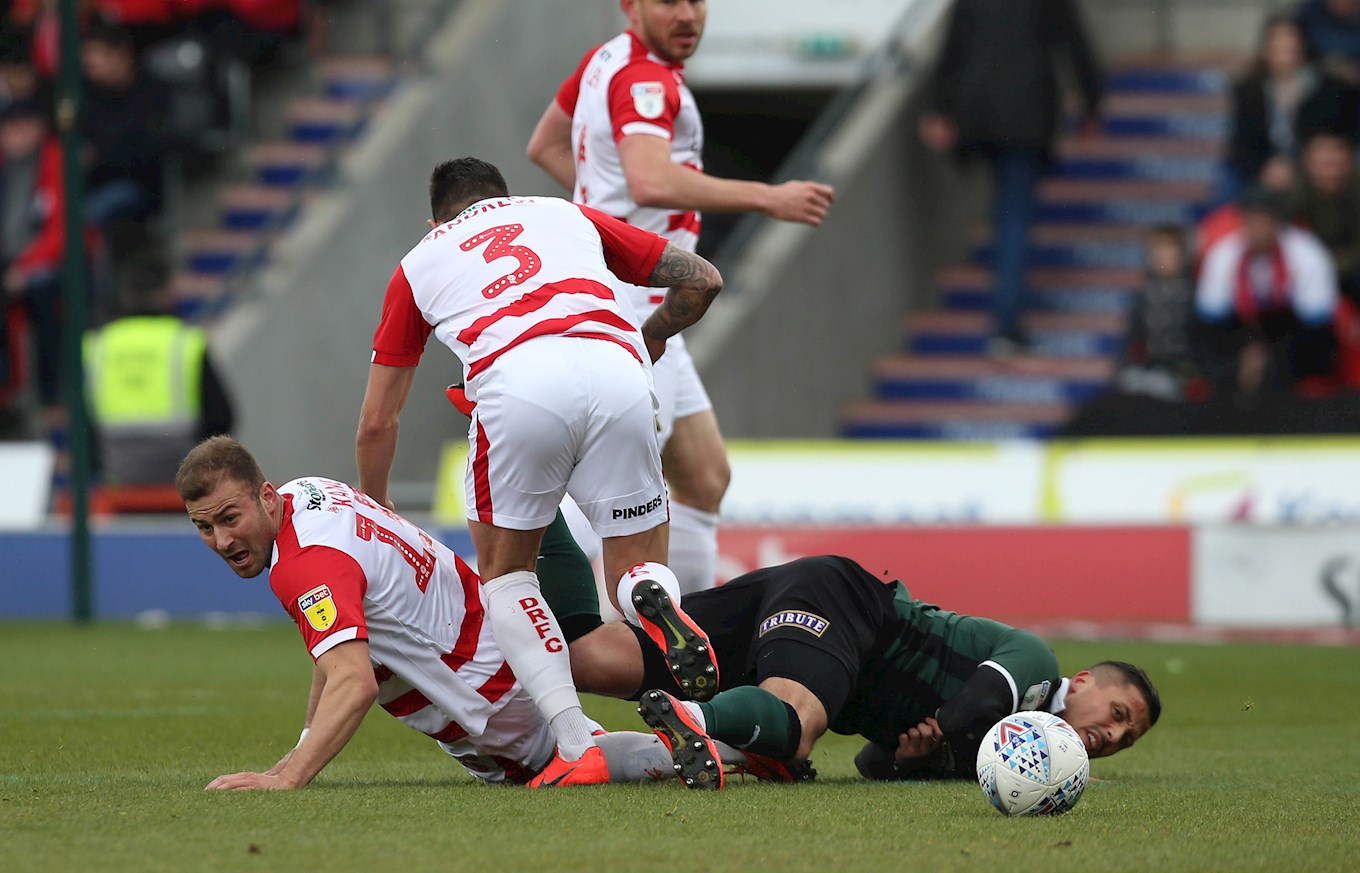 ARGYLE suffered their second consecutive Sky Bet League One defeat at the Keepmoat Stadium, where two Doncaster goals book-ended a disappointing first-half from the Pilgrims.

Rovers captain Tommy Rowe opened the scoring for the hosts on seven minutes, capitalising on Argyle’s inability to clear the ball to safety, before a direct free-kick from Danny Andrew on the stroke of half-time put the game beyond the Pilgrims’ reach.

Both sides entered the clash at the Keepmoat Stadium looking over their shoulders, albeit for very different reasons. The hosts, fresh off a narrow 1-0 victory over basement side Bradford the previous week, entered the tie occupying the final play-off position, with a five-point gap over seventh placed Peterborough.

Meanwhile, Argyle had failed to see excellent passages in each of their previous three performances amount to precious pointage, and thus approached the game only four points clear of the relegation places.

Manager Derek Adams, though, did not feel it necessary to shuffle his deck on this occasion, making  one enforced change to his starting eleven. Jamie Ness, the victim of a long-standing battle with his calves, did not travel, which meant a return for Yann Songo’o in midfield. Paul Anderson also missed out due to a slight muscular problem, and so academy graduates Alex Fletcher and Luke Jephcott completed the Pilgrims’ bench.

Doncaster were without 23-goal star striker John Marquis, who suffered a concussion at Valley Parade a week earlier. Fortunately for Grant McCann, and unfortunately for Argyle, Donny had ample cover in the form of Liverpool loanee Herbie Kane, which saw Mallik Wilks, a nominee for March’s PFA Player of the Year, operating at the sharp end of Rovers’ attack. In less high-profile news, Paul Downing stepped into defence in place of the injured Tom Anderson.

The Greens, wearing their home shirts and black shorts, started brightly, and had their first attempt on goal within the first 45 seconds. Good work between Antoni Sarcevic and Freddie Ladapo found Oscar Threlkeld on the right flank. His low cross, however, was a smidge behind Sarcevic, who connected but could not force it on target.

Shortly after, Donny fans thought they had the lead. James Coppinger, a sprightly 38-year-old, danced into the Argyle box and clipped the ball up to the far post. Wilks got his head on it and looked as baffled as the rest of the stadium when it hit the outside of the post and went wide. One feels that, somewhere in the stands, a concussed Marquis was ruing his luck.

No matter for Rovers, though, who took advantage of Argyle’s repeated inability to clear their lines on seven minutes through Rowe. The Doncaster captain latched on to the ball inside the Greens’ area after first Ladapo, and then David Fox, could not clear it, and struck punishingly into the top corner from little more than ten-yards out. Save for the opening thirty seconds, Rovers’ lead was a representative reflection of the balance of play.

A breakaway saw Graham Carey dribble his way into a dangerous area, before finding Sarcevic with a cute back-heel. Sarcevic squared the ball for Ruben Lameiras, who laid off for Fox from 25 yards, whose goal-bound effort to a wicked deflection before fizzing narrowly wide.

A series of ranged efforts from both sides followed in the spell afterwards, with Matt Macey getting down well on two occasions to deny Wilks. Argyle’s best effort belonged to Lameiras, who cut inside from the left flank and drove a right-footed effort low past the near post.

There were signs Argyle had begun to thaw out after their cold start in South Yorkshire, as Lameiras once again found some room to operate in the final third. This time, the Portuguese picked out Ladapo, who would have been clear on goal if his first touch had not evaded him at the most inopportune of moments.

Moments later, perhaps tiring of dealing with Lameiras’ tricky feet, Doncaster finally succumbed and brought the playmaker down on the edge of the area. Sarcevic and Carey stood over the set-piece, and it was the Mancunian, rather than the Irishman, who had a pop at goal – driving it straight into the wall. A second free-kick opportunity also came and went, when Carey’s cross was cut out by Andy Butler, who made amends for giving away the free-kick by hauling Ladapo down.

With the first-half nearly at an end, Derek Adams’ half-time team talk was made doubly difficult. A speculative left-in-swinging free-kick from full-back Andrew evaded the wall and crept inside the near post, past the scrambling figure of Macey. It was beginning to look like one of those days.

Whether it was already planned at just a solitary goal or otherwise, the gaffer introduced Ryan Taylor, who hails from nearby Rotherham, for the cautioned Songo’o at half-time. Taylor’s introduction meant a strike-partner for Ladapo, with the Pilgrims switching to a more direct 4-4-2 in the hope of igniting a fightback in front of a 600-strong travelling contingent.

With Taylor providing additional aerial support, the Greens played the early stages of the second-half a good 15 yards up the pitch but were still finding clear-cut opportunities difficult to come by. Just shy of the hour mark, an attacking surge, spearheaded by Threlkeld, eventually worked its way to Carey on the edge of the box, but he corked his effort and it span away from target.

Ladapo, so often the finisher, carved out a superb opportunity next, darting past several Donny defenders down the right channel, and into the box, before laying off to an unmarked Lameiras in a central position at the edge of the area, favouring placement over power, but not quite achieving it, Lameiras’ effort was on target, but a comfortable height for Marko Marosi to make his first meaningful save of the afternoon.

The Pilgrims had another golden opportunity shortly after, when Lameiras pick-pocketed a Donny defender to break into the box. The angle was closed quickly, and the Portuguese’s first attempt was blocked, before the resultant looping cross was hacked away from danger under close attention from Ladapo. Argyle continued to have the better of the second-half, but it was looking like one of those days in front of goal, too.

Even more so, when a poor lay-off from Ladapo inadvertently launched a Doncaster counter-attack where the hosts should have made it three. Good play from Rowe slipped substitute Alfie May through on goal, but the striker lifted his effort not only over Macey, but the bar too.

As the game approached its closing fifteen minutes, Argyle’s full-tilt approach was having great impact at both ends. First, Sarcevic’s surging run laid Ladapo in, but he took one touch too many and the opportunity disappeared, before Wilks got between the two Argyle centre-halves and struck straight at Macey.

It was Fox who was next in this sequence to spurn a good opportunity, latching on to Ladapo’s knock-down to slide his effort way off target from just inside the box, before Carey did the same on the half-volley after Taylor forced the ball on at the far post.

One of those days.