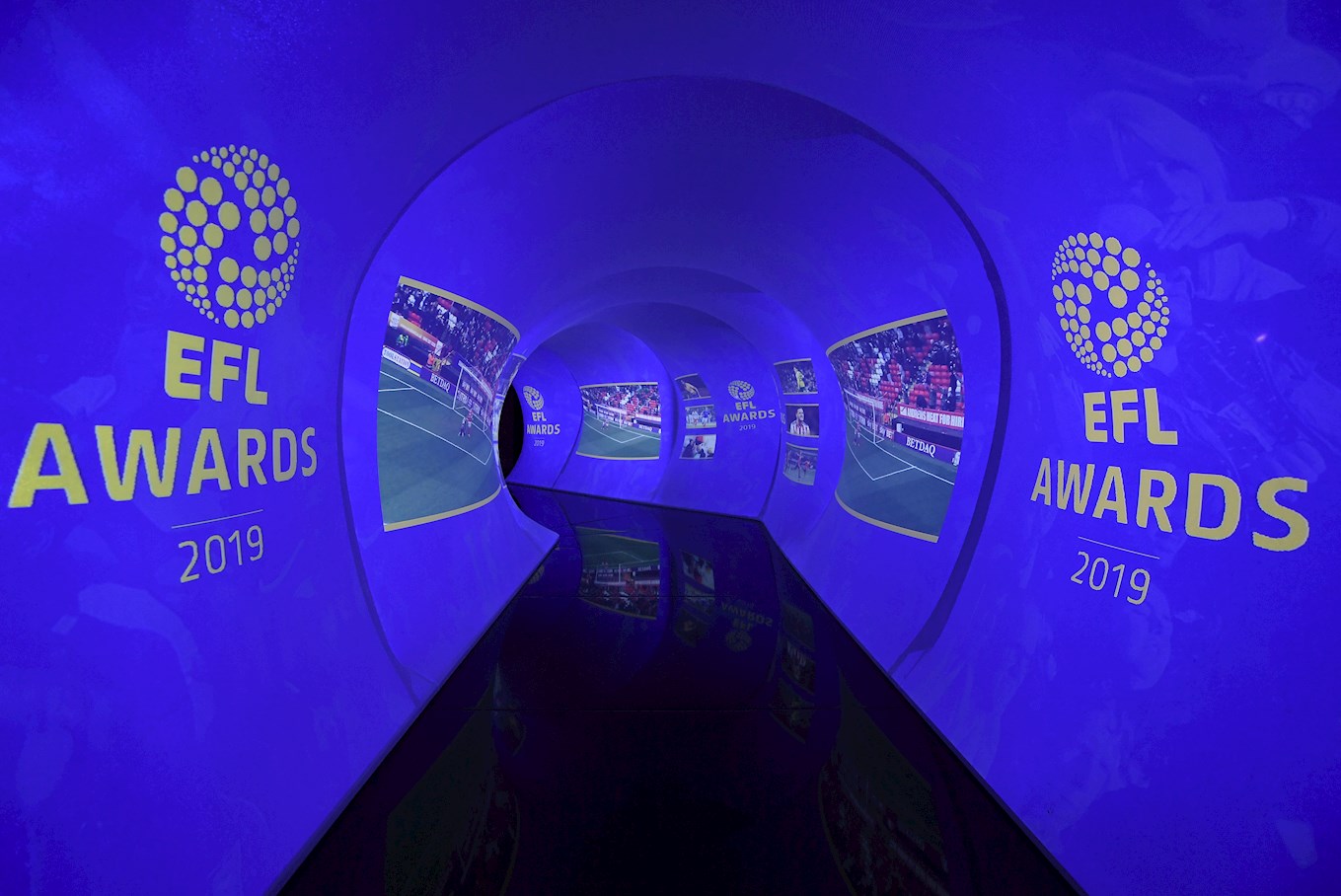 ON a glittering evening of football celebration, the winners have been announced for the 2019 EFL Awards.

Starting with the Football Manager Team of the Season, there were three representatives from Sky Bet League One and our congratulations go to James Collins from Luton, winner of the League One Player of the Season.

The full rundown of victors are listed below:

Sky Bet Player of the Season

Teemu Pukki, James Collins and James Norwood have been named the Sky Bet Players of the Season for their respective divisions at tonight’s 2019 EFL Awards.

All three have been central to Norwich City’s, Luton Town’s and Tranmere Rovers’ push for promotion, contributing a total of 75 goals and 13 assists between them in League action.

Pukki said: "It's an honour to win this award, I'm really happy for the recognition. I have really enjoyed this season so far in what is a fantastic league, but we know there are still many big games to come. There are many great players here, so it's special to win this award."

Collins said: “Obviously this is a really proud moment for me personally, it's been a great season so far both personally and for the team. Massive credit to everyone at the club for the amazing run we've been on, it's given us confidence and to win this really tops it off for me. I'm delighted."

Norwood said: “Obviously it's a great accolade, but this is a credit to my team, from one to 11. If they don't make the chances then I don't get this award. I'm absolutely delighted and so proud."

Max Aarons has been named the EA Sports Young Player of the Season at tonight’s 2019 EFL Awards.

The Norwich City defender beat off competition from Derby County’s Harry Wilson and Luton Town’s James Justin to collect the honour after a stellar season for the Canaries.

Aarons said: “I'm delighted, I couldn't ask for more. We've got our eyes on promotion but it's great to get this accolade.

“Credit to all of the staff and players at the club, I couldn't have won this without them, there's a great belief in the team and we're ready for the end of the season now."

Football Manager Team of the Season

The overall Football Manager Team of the Season for across the EFL has been announced at the 2019 EFL Awards.

Screwfix Moment of the Season

Sheffield United’s Billy Sharp has been awarded the Screwfix Moment of the Season.

Sharp claimed the award for becoming the leading goalscorer in the EFL this century when scoring his 220th goal since making his debut in 2004, overtaking former Southampton and England striker, Rickie Lambert.

Sharp said: “"This is absolutely fantastic, it's a really proud moment. Personal accolades are brilliant, and it's great to receive this.

“Of course, my focus now is firmly on putting a 'P' for promotion beside our name come the end of the season."

The talismanic Wolves midfielder’s outrageous strike against  Derby County – where he flicked the ball up before his dipping volley found the corner from all of 30-yards - claimed him the award, voted for on the night by those in attendance.

The Sir Tom Finney Award is presented to a player who has had an exceptional career in the EFL and epitomises the man after which this award is named. This special award gives the EFL the opportunity to recognise players who, like Sir Tom before them, have set standards for others to aspire to and reached the end of a truly outstanding playing career.

Thompson has been an inspiration to everyone, including football as a whole for what he has achieved in the game as a player and in his own personal battles.

Having battled back from Hodgkin Lymphoma, not once but twice, he etched his name in the Clubs history books after scoring the winning goal to keep Rochdale in the Sky Bet League One.

Thompson said: “To win this award is amazing. When I got told the other day I was doing a dance around the kitchen.

“I feel like my next chapter in life is going to be bigger than my football career. I am going to help people, and use what I’ve experienced to benefit others. To be recognised for what I’ve contributed to football and the league in particular is incredible – It is truly humbling.”

David Allison has been recognised with the Contribution to League Football Award at the 2019 EFL Awards.

The Award is the EFL’s most prestigious award and is presented annually by the Board of the EFL to an individual who has given a lifetime’s service to the professional game on and off the pitch.

Allison, who announced he would be retiring at the end of the 2018/19 season after 42 years of highly distinguished service, took charge of some of the biggest matches in the English calendar, including the 1996 Division One Play-Off Final between Leicester City and Crystal Palace.

Upon the end of his officiating days, Allison held several roles at the EFL, namely as Regional Co-Ordinator and Referees’ coach before his appointment as PGMOL National Group Director in 2007, where he provided support to all match officials throughout the Championship, League One and League Two.

Allison said: "I cannot believe that there are people in that room that I have looked up to all my life, and to win this award is beyond anything I've ever dreamt of.

“I can't believe they've chosen me, with all those people who I think have done more than I have."

Checkatrade Community Club of the Year

Portsmouth have been named the Checkatrade Community Club of the Year at the 2019 EFL Awards ceremony in London.

Portsmouth impressed the panel with their ongoing innovative work for a wide range of individuals in their Community - their youngest participant is three and their oldest 101.

They have an ambition to have an activity for everyone regardless of age, ability or gender. Their ground breaking project, based on a restorative justice approach for young fans involved in violence at Portsmouth games, was universally applauded by the judges.

Clare Martin, said: "It's unbelievable - and it makes it even more special because it's a complete surprise. The programme we've won this award on the back has already been rolled out, and hopefully this gives it more exposure to grow further afield."

AmazeRealise Family Club of the Year

Doncaster Rovers have been announced as the AmazeRealise Family Club of the Year at the 2019 EFL Awards ceremony in London.

Having been selected as the League One winners for their strong culture of fan focus at the Club, they have now been awarded the overall prize for projects including their innovative kit design competition and Donny’s Dog Kennel.

The award recognises Clubs who have demonstrated outstanding delivery of activities to attract and retain family attendance on matchdays.

Michael Burton, Marketing Assistant at Club Doncaster, said: "It means everything, not just for me, but for everyone at the club who has put hard work into this.

“We do a lot of work and it's a great feeling for the club to win this award. Family is so important, and we want to show that it's not just about standing on the terrace for 90 minutes, it's about more than that."

PFA Player of the Community

Rotherham United’s Will Vaulks has been named the PFA Player in the Community.

Over the last two seasons, Vaulks has been volunteering weekly at Bluebell Wood, a children’s hospice in Rotherham. With Bluebell Wood requiring £11,000 of funding per day to operate, Vaulks went under lock and key in a prison for ‘Jail and Bail’, which saw over £10,000 raised

Vaulks said: "It's a nice feeling, and one I wasn't expecting, to be honest.

“I'm honoured; but it's not about my exposure, it's massive to get this type of work out there. I don't think there's a more important type of work.”

YouGov Sport Supporters of the Year

Shrewsbury Town’s Roger Groves & Mike Davis have been announced as the YouGov Sport Supporters of the Year at the 2019 EFL Awards ceremony in London.

Lifelong Shrewsbury supporters, both Roger and Mike in recent years have worked on the Supporters Parliament very closely with Shrewsbury Town CEO Brian Caldwell to act as a conduit for supporter feedback.

In this area, they have made many positive contributions, including building awareness of the new Fanzone project, an initiative to resurface and light Super Blues Way, and were instrumental in driving the Club’s plans to introduce a safe standing area at Montgomery Waters Meadow.

Roger and Mike, said: “It's fantastic; as lower league football fans, we never expected to be recognised like this. We love our club and we do what we do because we want to make life better for our fellow fans.

“We have to mention every Shrewsbury fans across the world and couldn't have done this without the support of the people around us."

LFE Apprentice of the Year

Derby County’s Max Bird has been announced as the overall winner of the LFE Apprentice of the Year at the 2019 EFL Awards ceremony in London.

The award is to recognise the outstanding young professionals at EFL Clubs who excel both on and off the pitch. Players registered as first or second year apprentices, or first year professionals (if started on an Apprenticeship contract and then converted at 17 to a pro contract) are eligible for this award.

Alongside Bird, Rochdale’s Daniel Adshead and Stevenage’s Arthur Iontton have been selected as divisional winners from Sky Bet League One and League Two, respectively.

Bird said: “I'm delighted, I couldn't ask for much more. To win this award, it's a proud moment for me, and all I can do is thank everyone who has helped me, from the Under-18s up to the first team. It's brilliant, I just want to keep improving from here."

CEFA Player of the Season Awards

Sims said: "It's amazing! I was very nervous to get up in front of all these people, I'm new to this, but to be recognised is brilliant. I can't put it into words, I don't know how to sum it up. I love playing football, that's just me."

Hughes said: "It feels amazing - I think it's testament to what the community has done for me. It's a dream to be here, and it just shows that hard work pays off. I'm a proud man, and I think my family will be proud of me too. No words can describe this feeling.”