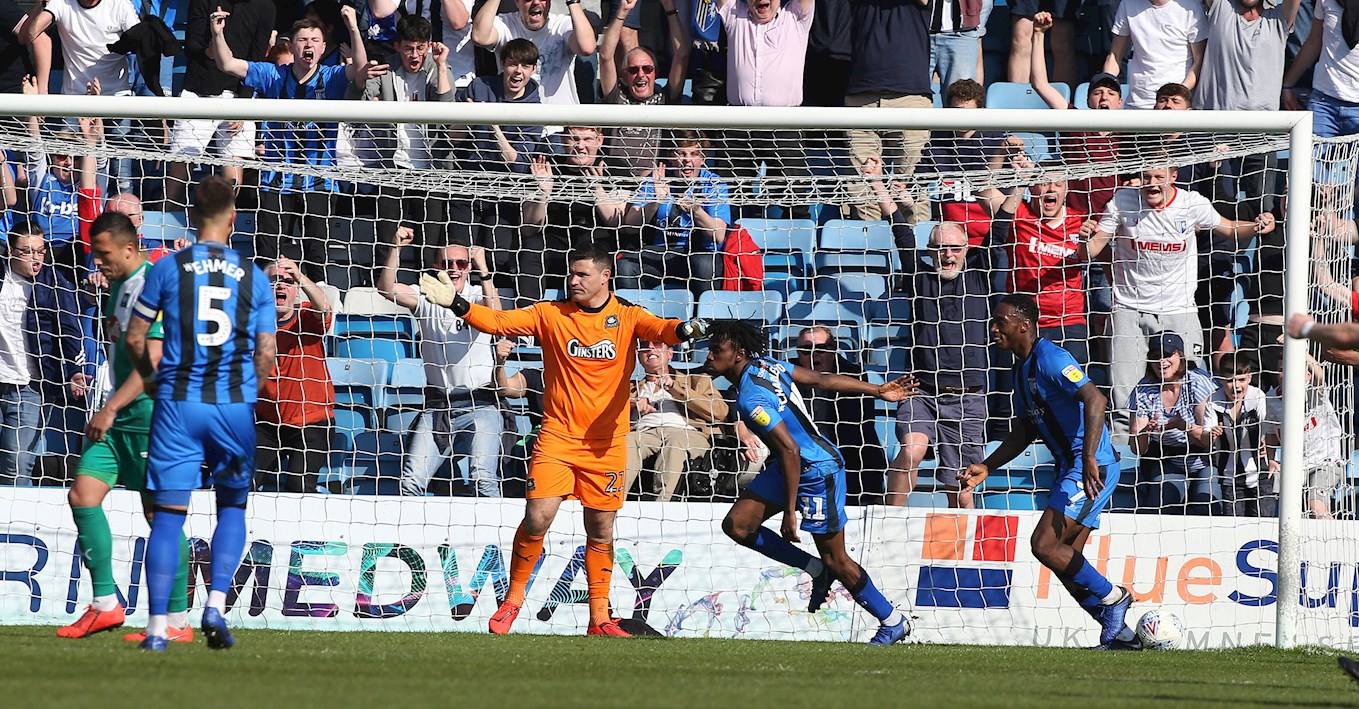 A THREE-MINUTE blitz from the home side ensured that Argyle’s search for a win at Priestfield will continue into at least a 39th year and that their similar pursuit for a victory to put to bed their 2018-19 Sky Bet League One season will go to the final three games of the campaign.

They looked good value to match a win last achieved in Kent by the 1981 Pilgrims, with Freddie Ladapo playing the role of John Sims to give them a 1-0 lead from a first half that they dominated.

Gillingham, though, changed their personnel at the interval and were a different prospect after the break, turning the game on its head within 180 seconds before the hour as Regan Charles-Cook and Mark Byrne scored.

Shellshocked, Argyle gradually worked their way back into the contest and looked like getting something back before, pressing, they conceded a third in injury time to Brandon Hanlan.

It had been a while coming – a lifetime or several weeks, depending on your starting-point – but Lloyd Jones started an Argyle senior-team game for the first time, one of four changes made by Derek Adams following the previous week’s 2-0 defeat at Doncaster Rovers.

The manager had promised line-up alterations in the Keepmoat aftermath and on-loan Luton Town defender and former Argyle Academy star Jones was one of four new names in the starting XI, as Niall Canavan dropped to the substitutes’ bench alongside goalkeeper Matt Macey and Yann Songo’o, and Oscar Threlkeld was nowhere to be seen.

Kyle Letheren replaced Macey between the posts for his first start since suffering injury at Sunderland eight games previously; Ash Smith-Brown slotted in to the somewhat jinxed right-back role after an identically long period of absence; and the hapless Jamie Ness, who missed the previous game with injury, came back into the side to replace Songo'o.

Ness took his place on the left side of a midfield diamond, directly opposite former Pilgrim Dean Parrett, with Graham Carey pushed up on Gills’ engine-room anchor Byrne, and Ruben Lameiras further forward in support of Ladapo.

Jones had plenty to occupy him in the game’s largely cagey opening, as Gillingham constantly sought out the considerable forward presence of Tom Eaves from all angles, most of which were well read by either Jones or centre-back partner Ryan Edwards.

At the other end of the pitch, Argyle’s probing for an opening promised much but delivered only a couple of long-range efforts, from Ladapo and Carey, which barely troubled perhaps the most nominatively appropriate EFL player in the round of Good Friday fixtures, Tomas Holy.

Gillingham were without a win from their previous three home games and looked a little anxious whenever they got the ball forward, never more so than when defender Connor Ogilvie crafted half a chance in the six-yard box, only to shoot clumsily against an Argyle defender.

Reprieved, Argyle went straight up the other end and scored with a trademark Ladapo strike. Carey astutely robbed Byrne of possession in the centre circle and quickly picked out Ladapo, who equally quickly had the drop on Gills captain Max Ehmer, twisting and turning him before firing off a powerful left-foot shot that went through Holy.

Argyle had been set up to attack, and nothing they did after the goal suggested that they would adopt a more conservative approach. Indeed, a second Argyle goal before half-time looked more likely than a Gills’ equaliser, especially after Billy Bingham – and there is a name redolent with Argyle history – spurned some good work by Hanlan.

The half-time whistle must have sounded sweet to the Pilgrims, but possibly not as sweet as the jeers from the home fans which accompanied their team into the dressing-rooms.

That team was very much changed when it re-emerged, with Eaves and Bingham having been subbed off in favour of Elliott List and Tahvon Campbell, and they immediately went on the attack. Their speed caused problems for Letheren, who needed treatment after sprinting from his goal to snuff out an attack and colliding with Smith-Brown.

Argyle responded through a breakout that ended with Ladapo shooting low, just side of Holy’s right-hand post.

Their next foray was led by, of all people Edwards, who showed no little skill in dummying the ball inside the six-yard box following a corner, but ruined his approach play by skying his subsequent shot.

With the Gills’ new-found desire having won over the crowd, and much still at stake for both sides this season, we were now in the middle of a much more intriguing contest.

‘Intriguing’ became ‘even’ when Charles-Cook finished off List’s work on the right from close in, and ‘even’ became ‘totally flipped on its head inside seconds’ when an unmarked Byrne headed home another right-wing cross, from Luke O’Neill, at the near post.

From being in a position of some comfort, Argyle were now struggling to find a foothold in the game. They gradually drew the sting of the Gills’ attacks and edged forwards themselves without creating anything clear cut until Lameiras teased his way down the right with 15 minutes to go.

His perfect pass inside found Antoni Sarcevic in space, with a clear sight of goal and no defender on him. It seemed inconceivable that he would not equalise, but he placed his shot wide.

Ryan Taylor and Niall Canavan came off the bench to enhance the pressure that the Greens were exerting, with Jones proving effective as a raiding right-back

Half-chances, glimpses of openings, possibilities, all ensued to give them hope of a valuable point, not least when Edwards headed a Carey free-kick back across goal, only for it to nestle on top of the goal net.

Having gone all in, Argyle were hopelessly exposed in the first minute of five added on to the 90 when Hanlon broken on Canavan's misplaced pass, unfettered, from halfway and slotted the ball past Letheren.