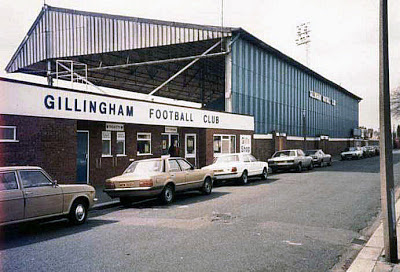 JUST four games remain in Sky Bet League One, and Argyle, on Good Friday, will visit the Priestfield Stadium.

This represents a significant challenge for the Pilgrims, visiting a venue, and a team, that we have not beaten on their own turf in a staggering 38 years.

Sims started at Derby County and one of his three appearances for the Rams came in the European Cup semi-final against Juventus. He signed for Argyle in 1978, following manager Bobby Saxton from Exeter.

After four years at Home Park, Sims moved to Torquay United before re-joining Exeter City, finally ending his professional career with a spell as player-manager back at Torquay. He went on to play for Saltash United and Waldon Athletic.

The last time we came away from Kent with even as much as a draw was 1986, when Kevin Summerfield got the goal on March 4. The Argyle team on that day was: Geoff Crudgington, Gordon Nisbet, Leigh Cooper, Clive Goodyear, Gerry McElhinney, Kevin Summerfield, Kevin Hodges, Russell Coughlin, Kevin Godfrey, John Clayton, Garry Nelson.

As nearly four decades have passed since our last win in Gillingham, we cast our eyes back to 1981 in an attempt to rustle up some good omens ahead of our Good Friday clash.

In the footballing world, Liverpool won their third European Cup, and first ever League Cup, but that season failed to mount a serious challenge for the league title, which was won by Aston Villa and Ipswich Town were the runners-up. It was also the year the Football League moved to three points for a win.

In politics, Margaret Thatcher was just beginning to get into the groove at Number 10 Downing Street, in her third year of an eleven-year term as British Prime Minister. The week of Argyle’s last away victory over the Gills, Shakin’ Stevens sat atop of the charts with ‘This Ole House’.

The price of a pint of milk back then was 20 pence, while the average house price was £24,000. Argyle manager Derek Adams was just entering Primary School, while David Fox, the eldest member of the Pilgrims’ current first-team crop, was still two years away from being born.

Good Friday would be a great day to end this long run.