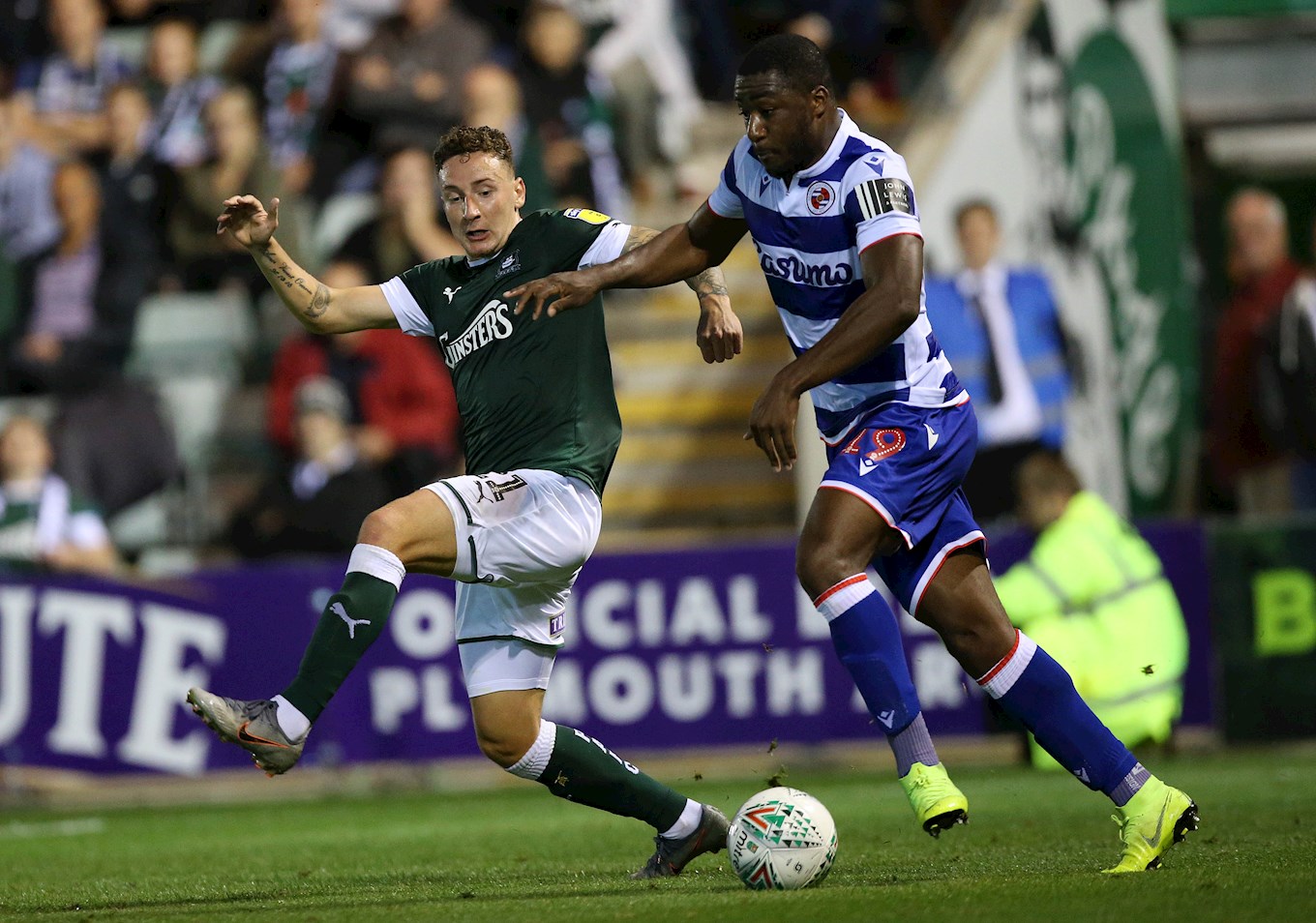 ARGYLE twice took the lead courtesy of Ryan Taylor and Jose Baxter in an end-to-end encounter, but were sadly not able to see off Championship side Reading in the Second Round of the Carabao Cup.

The Greens competed well throughout the contest and equipped themselves to a man with high class opposition, who themselves are in a rich rein of form. On a different night the result could have easily gone the other way.

Josh Barrett twice levelled for the Royals and the Pilgrims were eventually undone by a brace from Yakou Meite in the final four minutes of a breathless contest.

Argyle manager Ryan Lowe made five changes to the side that comfortably beat Walsall 3-0 at the weekend, as 19-year-old keeper Michael Cooper replaced Alex Palmer between the sticks and on-loan Josh Grant came in for skipper Gary Sawyer on the left-hand side of the back three. Niall Canavan and Scott Wootton occupied the other defensive positions.

At right wing-back, Tafari Moore replaced the injured Joe Riley for his first start of the season and Callum McFadzean kept his place on the opposite flank after an extremely impressive start to his life as a Pilgrim.

In midfield, Baxter made his full debut for the club, despite making six successive substitute appearances since joining The Greens, alongside ever-present stalwarts Joe Edwards and Danny Mayor.

Up top, Saturday’s two goal hero Taylor was partnered by Zak Rudden, who was also making his full debut for Argyle after signing on loan from Rangers last Friday and coming off the bench against Walsall.

Reading’s starting 11 featured no less than a remarkable eight products of The Royals’ academy set up, with a further three on the bench. All of the Reading supporters would have been delighted with the inclusion of Jordan Obita, who played his first competitive senior football match for 703 days due to a lengthy knee injury.

The Greens started the tie with real purpose and forced a corner inside the opening two minutes. Argyle took it short and after some textbook Danny Mayor trickery, delivered an inviting cross that Taylor met well with his head and forced Reading ‘keeper Sam Walker into a smart save, tipping the effort over the bar. The following corner again caused The Royals problems, but they were able to eventually clear.

However, no less than two minutes later, Reading forced Michael Cooper into action. The young Argyle custodian was on hand to beat away a firm Meite effort after the energetic striker capitalised on Niall Canavan’s rare lapse of concentration.

After the game had somewhat seemed to settle, Mayor again caused the Reading defence serious problems, going on another one of his mazy runs that the Green Army have quickly grown to love.

He weaved in and out, past defender after defender and miraculously managed to dance along the by-line before pulling back an inviting cross begging to be finished. Zak Rudden met it well, but Reading in the right place to block. The rebound fell kindly for Baxter, who couldn’t quite connect properly and saw his volleyed effort bounce off the turf and over the bar.

Argyle managed to unlock the young Reading defence again with a neat passage of play that would not have looked out of place in the Championship. First, Baxter danced away from a few men in the middle of the park before finding Mayor, who released Rudden, bursting into the box, the young Scottish striker was unable to get the ball quite under control and the recovering Reading defender got a vital foot on the ball to put it out for a corner.

Goals are like buses, you wait 16 months for one and then two, sorry three, come along at once. Taylor was in the right place at the right time to get his third goal in two games. A tantalising Callum McFadzean cross pinballed around the area as Josh Grant and Rudden both seemed intent on keeping the chance alive after it may have gone out of play, and the ball fell to Taylor, who capitalised on the carnage to open the scoring.

A succession of crosses from the Royals’ left-hand side caused the Pilgrims backline a number of problems, but Josh Grant was on hand to get his head on a clearance the two times he was called upon.

The Royals’ pressure was rewarded after former Liverpool man Charlie Adam launched a counter-attack from the left full-back position, sending Barrett galloping down the wing. He drove into the Argyle box and look set to cross before a firing a strong low effort past Michael Cooper to level the score.

After scoring the equaliser, Reading started to look much more like the higher-level opposition they were and certainly had their tails up. They were responsible for the game’s next major opportunity to take the lead. Danny Loader cleverly turned in the centre circle and released Meite down the right-hand side. After slowing down the attack, he delivered a measured cross that found the head of Loader at the back stick, and the English youth international nodded just wide.

Argyle began the second half attacking the Devonport End, after making a change to the strike-force, bringing Klaidi Lolos on for goal scorer Taylor, but it was Reading who had the half’s first big chance, after Lolos lost the ball inside the Argyle, Barratt blasted a shot just wide.

The Royals continued to create, and full-back Teddy Howe delivered a testing cross from the right-hand side but Wootton was on hand to clear well whilst facing his own goal.

In all fairness, Argyle didn’t start the half well and were fortunate to not find themselves behind. Mayor took it upon himself to drag the Greens back into the affair, after seamlessly taking on and beating defender after defender, some twice. Reading resorted to what most of our fellow League Two opposition have done to stop Mayor, fouling him. The resultant free-kick was put behind for a corner that subsequently came to nothing.

The Greens found a breakthrough somewhat against the run of play, Edwards won the ball inside his own half and managed to find Lolos and the young Greek striker brought the ball forward well and found Baxter in acres of space on the edge of the box. The former Everton man took a touch to set himself and arrowed a low strike into the bottom corner to score his first goal for the club and make it 2-1 to the Greens.

Reading responded well, and Loader did his best Mayor impression, skipping past a number of Argyle defenders before winning his side a corner. A back post-delivery found Meite rushing in but he turned the ball narrowly passed the post.

Another period of Reading dominance followed, as they looked to pull themselves back into the game for the second time, the best opportunity they could fashion during the spell was a deflected Charlie Adam effort which Michael Cooper held well. Minutes later, Cooper was on hand to save smartly again from Loader.

Reading’s best chance of the second half came after Barrett nearly emulated his goalscoring effort from the first half. A near carbon copy of his levelling strike was this time saved well by Cooper, but the rebound fell kindly for newly introduced Sam Baldock, who’s effort beat Cooper but was expertly cleared off the line by McFadzean.

This woke the Greens up and they nearly extended their lead. Mayor, again, glided past the Reading defence and his cross-shot thudded against the outside of the post.

Another Pilgrims attack was abruptly thwarted by Adam on the edge of the Reading box. Conor Grant rampaged forward but was chopped down from behind by the veteran Scottish midfielder, who was lucky not to receive a second yellow card. This would nonetheless prove to be his last involvement in the game as he was substituted a matter of minutes later.

Conor Grant picked himself up to take the free-kick and was unlucky not to score, as his low effort nearly caught Sam Walker out, but the Reading ‘keeper got down well to save.

Reading levelled the scoring again in the 72nd minute. Barrett got his second of the game, picking up the ball on the left-hand side, he cut back and unleashed an unstoppable right footed effort into the top corner of Cooper’s net. Sometimes you just have to applaud the opposition, and this was certainly one of those occasions – unfortunately for us.

Obita was next to sting the palms of Cooper with a long-range left-footed effort. Either side looked like they could get the next goal – one that could ultimately prove decisive.

As the game entered the final ten minutes, Meite was set through one on one with Michael Cooper, but again the ‘keeper was on hand to smother the onrushing striker at his feet.

Reading found a killer through ball once again and this time Cooper was unable to save. Meite rounded him and Cooper was perhaps unfortunate to bring him down. The referee pointed to the spot and Reading had the chance to take the lead for the first time.

The man who was brought down, Meite, stepped up to take the penalty and he sent Cooper the wrong way to make it 3-2 to the Royals.

Not disheartened by conceding so late in the game, the Greens rallied and instantly forced a corner courtesy of Lolos twisting and turning before seeing his cross blocked.

It wasn’t to be for the Greens, the corner looked threatening, but Reading were ultimately able to clear to devastating effect.

A long ball was picked up and Reading found themselves two on one. The ball was squared to Meite and his side-footed effort squirmed under the otherwise impressive Cooper to make it 4-2 to Reading.