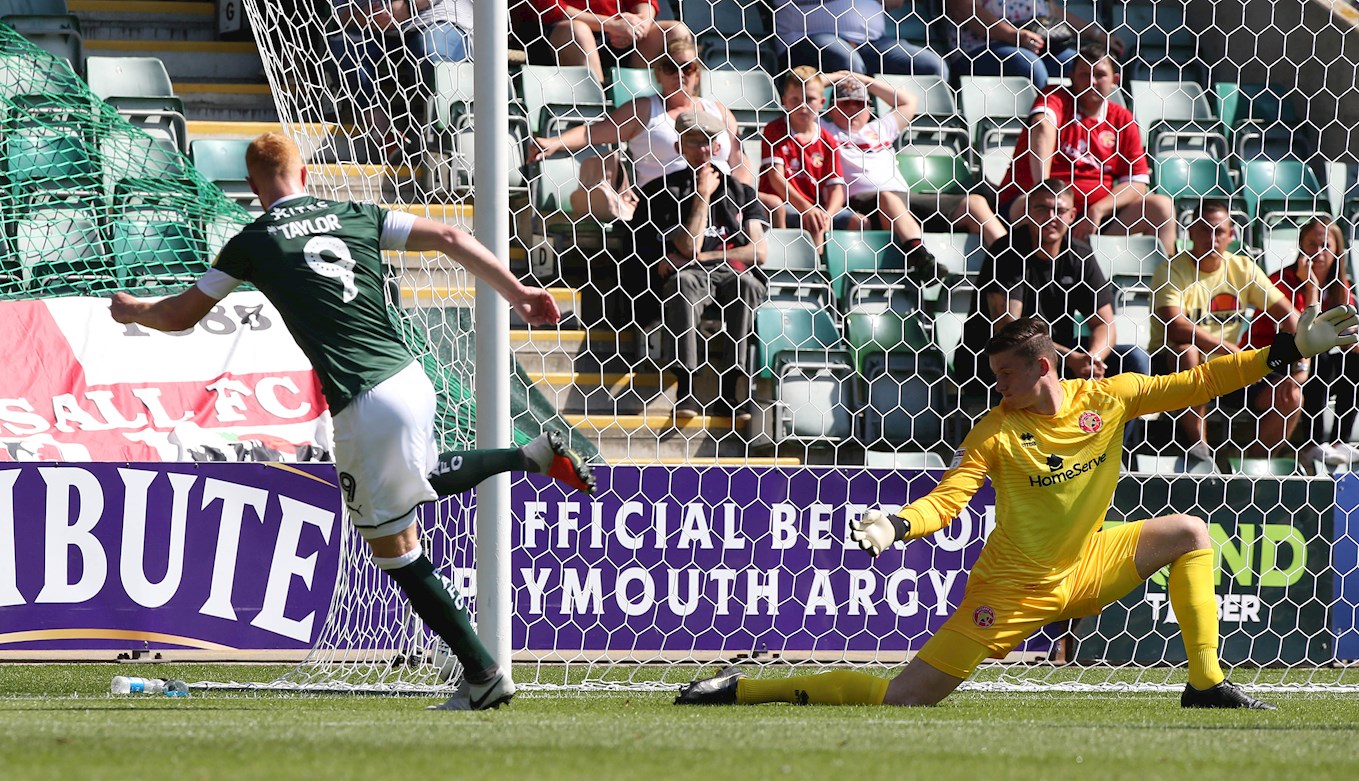 RYAN Taylor’s first goals for 16 months, either side of substitute Antoni Sarcevic’s strike, fired the Pilgrims up to second place in Sky Bet League Two.

Taylor top-and-tailed a hard-worked-for, but ultimately comfortable, victory, scoring 13 minutes from kick-off and two minutes from full-time to claim a match-double for Argyle for the first time.

Six minutes before Taylor’s second, Sarcevic had netted his own second of the season after coming off the bench for an eight-minute cameo that was curtailed prematurely by an unlucky sending-off shortly after his goal.

Argyle manager Ryan Lowe had selected an unchanged starting line-up for the Pilgrims’ second Home Park game in a week, and fourth home match inside a fortnight, resisting any temptation to plunge new signing Zak Rudden in at the deep end.

The Rangers teenager began his half-season loan on the substitutes' bench as the only variance in the 18-man squad that had drawn 2-2 at home to Salford City four days earlier.

Conor Grant continued in central midfield, alongside former Walsall player and sometime captain Joe Edwards and Danny Mayor, whose long-awaited first Argyle goal had arrived in some style against the Ammies.

The attack was again led by Dom Telford, whose last-minute penalty in midweek earned the Pilgrims their draw, and Taylor, who had assisted Mayor’s moment of magic.

To an assist then, add a subsequent quality strike, a quintessential Taylor finish, the Argyle No.9 timing his run to the near post to perfection just as Callum McFadzean’s low and hard left-wing cross arrived to make the tap-in a formality.

It was Taylor’s first goal since the tail end of the 2017-18 season, in a 2-1 home win over Peterborough United, since when he has played a part in 42 matches without finding the target. The passionate manner of his celebrations in front of Block 17 suggested a damn of considerable emotions had been broken.

The striker’s barren streak had been nothing compared to that currently plaguing his captain and long-time team-mate, but Gary Sawyer thought he had notched for the first time since his Boxing Day 2017 winner at Milton Keynes when he bundled in a cross from Conor Grant.

With Sawyer clearly onside, there was some debate between referee Josh Smith and his linesman before the goal was ruled out, seemingly because Grant’s cross had brushed an offside Taylor on its way to Sawyer.

Telford’s race was run a few minutes later when, chasing a long ball over the top, and looking short odds to best Walsall’s last man to the ball, he pulled up lame, apparently with a recurrence of the hamstring problem that affected him in pre-season.

Telford’s poison was meat for Rudden, who made an earlier than expected debut and was immediately into the thick of things, being prevented from turning home Joe Riley’s low drive into the box only by a challenge that was barely this side of legal.

Walsall managed to keep things tight while trying to find a way back into the game and Elijah Adebayo tested Alex Palmer with a shot after making space for himself on the edge of the Pilgrims’ penalty area.

The match certainly looked Argyle’s to lose as half-time approached and Scott Wootton, whose season has been something of a revelation, nearly doubled the lead when he headed Grant’s sumptuous cross goalward, to be denied by a fine save from Sadddlers’ goalkeeper Liam Roberts.

The second half was a more even affair altogether.

Rudden put himself about to such irritating good effect that the nominatively determined Mat Sadler looked at one stage as if he was about to choke him.

Walsall continued to attempt to break Argyle’s stranglehold on proceedings and came close when Cameron Norman fired not all that high over the cross bar from an acute angle near the right bye-line.

The Saddlers then introduced substitute Caolan Lavery, known to the Green Army for his three-goals-in-eight-games loan spell at Home Park from Sheffield Wednesday in 2013-14, and to half the Argyle first-team from his time at Bury last season; Argyle brought on Jose Baxter for the injured Joe Riley, switching their other Joe – Edwards – to right-back.

Whether it was the substitutions or not, Walsall entered their most potent period of the game, and Argyle’s 3-5-2 looked more like 5-3-2 for long periods as they faced a team trying to do to them what they generally do to the opposition.

On which subject, a quick break, beautifully engineered by Baxter, allowed Grant to shimmy into space and crack off a left-foot drive that cleared the bar by inches, rather than feet.

Back came Walsall, looking especially threatening down their right-hand side, from where substitute Wes McDonald obliged Palmer to save at his near post.

McFadzean, still the Pilgrims’ leading scorer this campaign, went even closer from a similar position, when, after linking with Mayor – who else? – he crashed a shot against the upright with a resounding twang.

Mayor was becoming unplayable and Walsall employed fair and foul means to try to halt his progress. The more they hacked at him, the more determined he became to inflict damage on them and his pluperfect pass to Sarcevic achieved that aim.

The day was in danger of being spoiled by a red card for Sarcevic after a challenge on Stuart Sinclair that did not appear to merit such a punishment, before Taylor brought back the smiles with a thumping finish after running on to Palmer’s long free-kick up fieldthat evaded defender Dan Scarr.