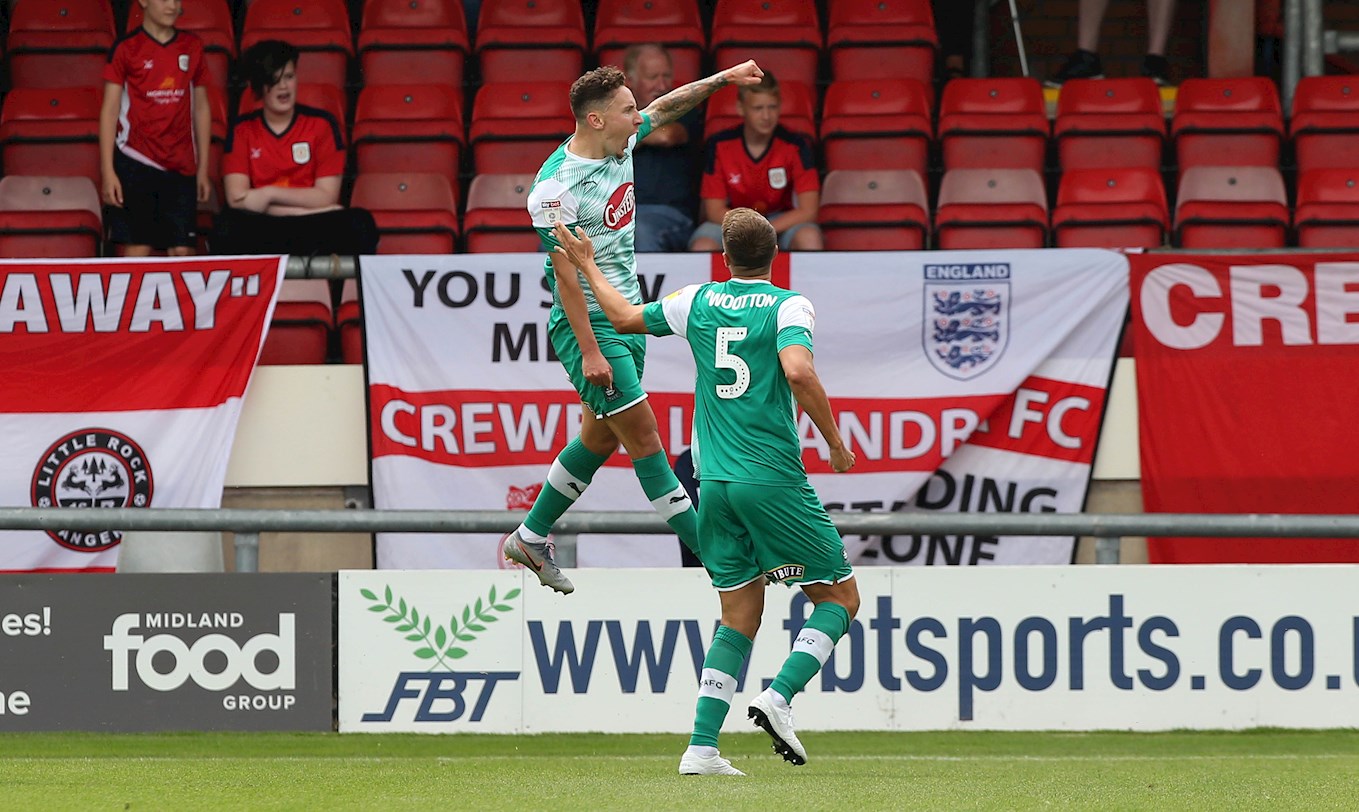 McFadzean’s spectacular scissor-kick just four minutes into the new season gave the Pilgrims a perfect start to life under Lowe, before Grant struck clinically from the edge of the area to double our advantage. With the game stretched, left wing-back McFadzean grabbed his second on the break in stoppage time to cap a dream debut.

Manager Ryan Lowe, also making his competitive bow for Argyle, could rely on attacking changes from the bench if necessary, with four forwards included among the replacements. Only Will Aimson, recovering from a medium-term close-season injury, missed out through fitness reasons, with Ryan Taylor and Dom Telford both healthy enough to return to the bench after a truncated pre-season.

If the 1,700 Green Army harboured any lingering resentment over the Pilgrims’ disappointing relegation from Sky Bet League One, they did not show it in the minutes leading up to kick-off at the Alexandra Stadium, bouncing in a carnival atmosphere fit for a promotion party. We can only hope they will have cause to do so for real come the season’s end.

There is something a little extra special about a season-opening game, even before a team has undergone the makeover that Lowe’s Pilgrims have had in the summer recess. Spirits have been high at Home Park, but even the most optimistic of individuals would surely not have predicted that Argyle would open their Sky Bet League Two account in such perfect circumstances just four minutes into the season.

Edwards mopped up possession in the heart of midfield and immediately set about threading in Moore down the left. The pacey forward raced past Alex skipper Perry Ng to deliver an early ball across the hosts’ box. The pass narrowly evaded fellow striker and former Crewe player Joel Grant, but found Joe Riley unmarked.

His right flank shot flew up into the air, via Grant’s head, to be acrobatically thumped past Will Jaaskelainen and into the top corner by McFadzean – who, incidentally, only had four career goals to his name before kick-off. I would wager that this one was the best of the lot.

With Crewe also looking to adopt a fast, passing game, the Pilgrims had to hold their own in the following minutes, and brave blocks from Scott Wootton and Niall Canavan, helped Argyle retain their slender lead. McFadzean, though, was keen for more and, having once again collaborated with Moore, he burst into the box, getting to the byline and pulling the ball back. Only a last-ditch interception from Ryan Wintle denied another Alex alumnus, Antoni Sarcevic, a clear shot at goal.

Next up to test Jaaskelainen was Danny Mayor, who went on the type of run that only he could dream of. Collecting the ball in the sort of area most players try to buy a throw-in from, he skipped past two Alex challenges, on to the by-line inside the box, before cutting inside and striking low. Jaaskelainen squeezed it wide.

Perhaps the most pivotal minute in the match occurred shortly after. Alex Palmer performed a crucial double-save, first denying Chris Porter’s volley from the penalty spot after Ng’s excellent right-wing delivery, before showing superb athleticism to scramble across and stop Charlie Kirk’s follow up at the near post.

From the resultant clearance, Argyle built an attack which found its way to Joel Grant, 22-yards out, on the edge of the area. Such is the Pilgrims’ philosophy under Lowe and his team, Grant knew exactly what to do - shoot. He did. Low. Far post. Net bulged. You beauty.

The Greens continued to wreak havoc in the final third as the first-half drew to a satisfying close, and the pace of Grant and Moore stretched a creaking Alex back line. Riley, getting forward again down the right, crossed low into the area. Jaaskelainen took the decision to get down at the feet of Grant to parry the ball up and out. Underneath it was Moore, who tried to ‘do a McFadzean’, but his scissor-kick corkscrewed away from danger. Not to be forgotten at the other end, Palmer got down smartly to tip a Porter header around the post.

As much as the Pilgrims’ devastating mix of pace and movement had been expected from a Ryan Lowe side, perhaps the most encouraging thing about the Greens’ opening day victory in Cheshire was their defensive shape and tenacity during a second-half in which they were forced to dig deep.

The teams emerged for the second-half unchanged, save, perhaps, for the hairdryer treatment the Crewe players had received at half-time. From a corner, Alex should have reduced the arrears on 49 minutes, when Sarcevic’s half-cleared header fell to Lowery at the far post. Luckily for the Greens, the midfielder’s effort sailed over the bar from 10 yards.

The hosts continued to press in the opening stages of the second-half, introducing Callum Ainley for James Jones in the process, as Porter nodded another set-piece opportunity wide of target. Scott Wootton went into the book on 57 minutes for a late challenge on Kirk, before a brave last-ditch challenge from the former Manchester United youngster denied Crewe what surely would have been a goal moments later.

Under the cosh, the Pilgrims’ goal was threatened again by Porter, whose hooked volley was tipped away by Palmer, who was enjoying quite the debut. The rebound fell to Kirk, though, whose effort found its way into the back of the net via a deflection, but the assistant referee’s flag for offside preserved the Pilgrims’ clean sheet for a little longer.

As the clock ticked down, Lowe introduced Jose Baxter for his Pilgrims’ debut, and Ryan Taylor for a tiring Moore. Tempers threatened to boil over as Kirk and Riley clashed, with the home forward placed into the book. Sawyer and Palmer also picked up cautions in pursuit of a hard-earned shutout.

Having drawn the sting out of Crewe’s valiant response, Argyle finished strongly, with another mazy Mayor run and shot deflected narrowly over the bar, before Taylor nearly combined with fellow substitute Conor Grant to net his first of the season.

A third would come, though, as Conor Grant’s sweeping cross-field ball found Mayor in acres of space. He drew two men before laying off McFadzean to slam home his second on the overlap.

The Greens are back – and how we have missed them.