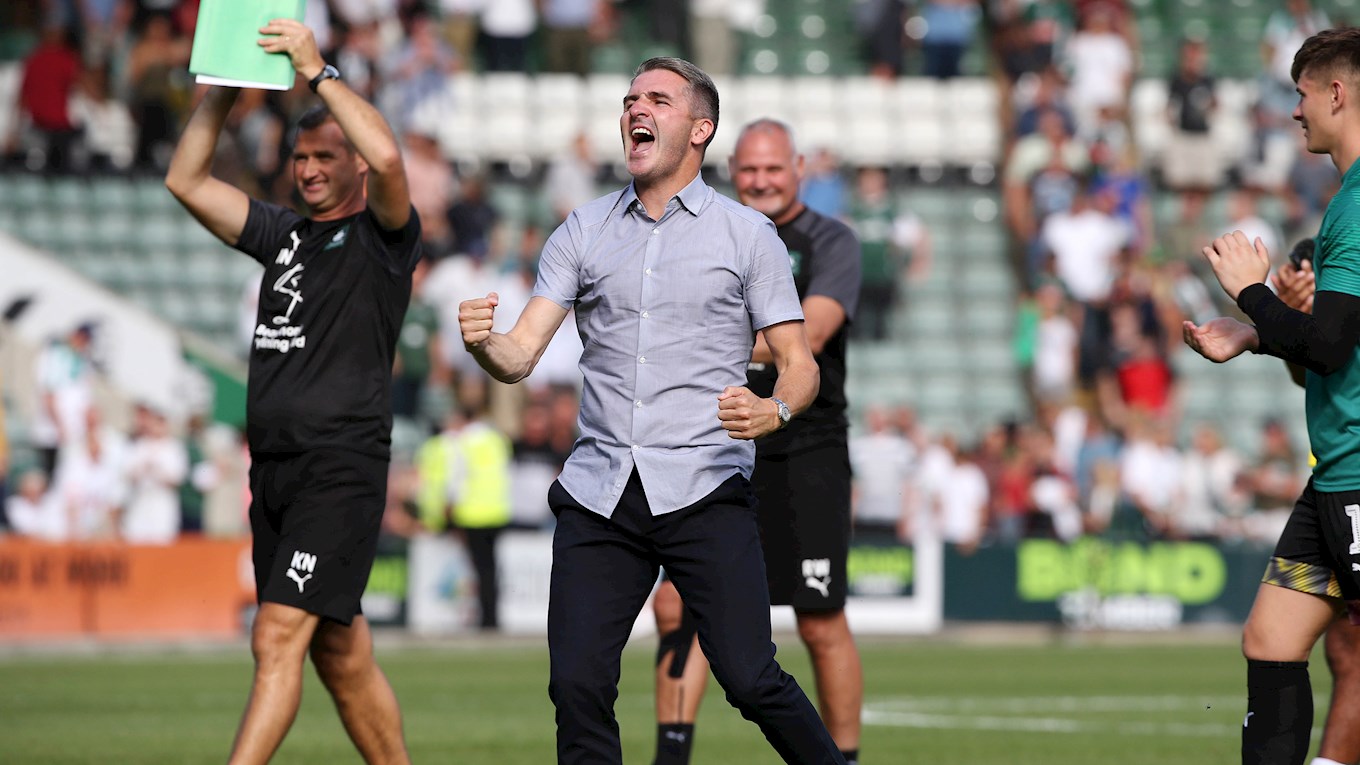 FOR the Green Army, perhaps the only, very small, downside to Saturday afternoon’s emphatic and enjoyable 3-0 victory over Walsall is that Exeter City also won.

Argyle’s victory – from two Ryan Talor goals and an Antoni Sarcevic strike - moved them up to second place in Sky Bet League Two after five games, one point behind Devon rivals and division leaders, Exeter City.

Playing fast, attacking football, under a glorious beating sun in front of an energetic and vocal Green Army, manager Ryan Lowe had every reason to be happy – and happy he was.

“We felt we were on it today,” he said. “I felt we dominated the game from start to finish in all honesty. No disrespect to Walsall but I thought we had a little bit too much in certain areas.

“It doesn’t matter who’s top of the table. It has no relevance. We just worry about us and we’ll continue to play the way we’re playing; score goals, keep the clean sheets.

“We know we can always get better, improve. The league position at the moment…it is what it is.”

Taylor opened the scoring in the 13th minute with his first goal for 16 months, and Ryan said: “To get a goal from what we’re working on in training is what we want [Ryan Taylor’s opener], and then obviously the second one and the third to finish it off. Three points, three goals, clean sheet – happy days.

“When we do our patterns of play, when we do our training sessions and where we feel we can score and how we’re going to score, and when it comes to fruition like that; Fadz [Callum McFadzean] down one side and Tayls getting across his man – goal.

“[For the second goal] Danny Mayor comes inside, passes into Sarce [Antoni Sarcevic], who takes it on the back foot, takes the defender out and one-on-one with the keeper – strokes it in.”

Although his side have amassed an immensely satisfactory 10 points from the opening five games, Ryan is not getting carried away and has insisted the best is yet to come.

He said: “Everything can get better, we look at flaws in the game, we’ll analyse it and the positives are great, which we expect because the standards are high. Little small details in what we need to improve on and when we’re giving a ball back cheaply, we can’t do that.

“It’s learning things every day and we’ll keep continuing to do that but you want to win every game you possibly can.”

The positivity around Home Park is obvious for all to see and it’s exciting to see where the season will take us but, for now, Ryan is staying grounded.

“We will have our ups and downs. At the moment, we’re having a lot of ups.”