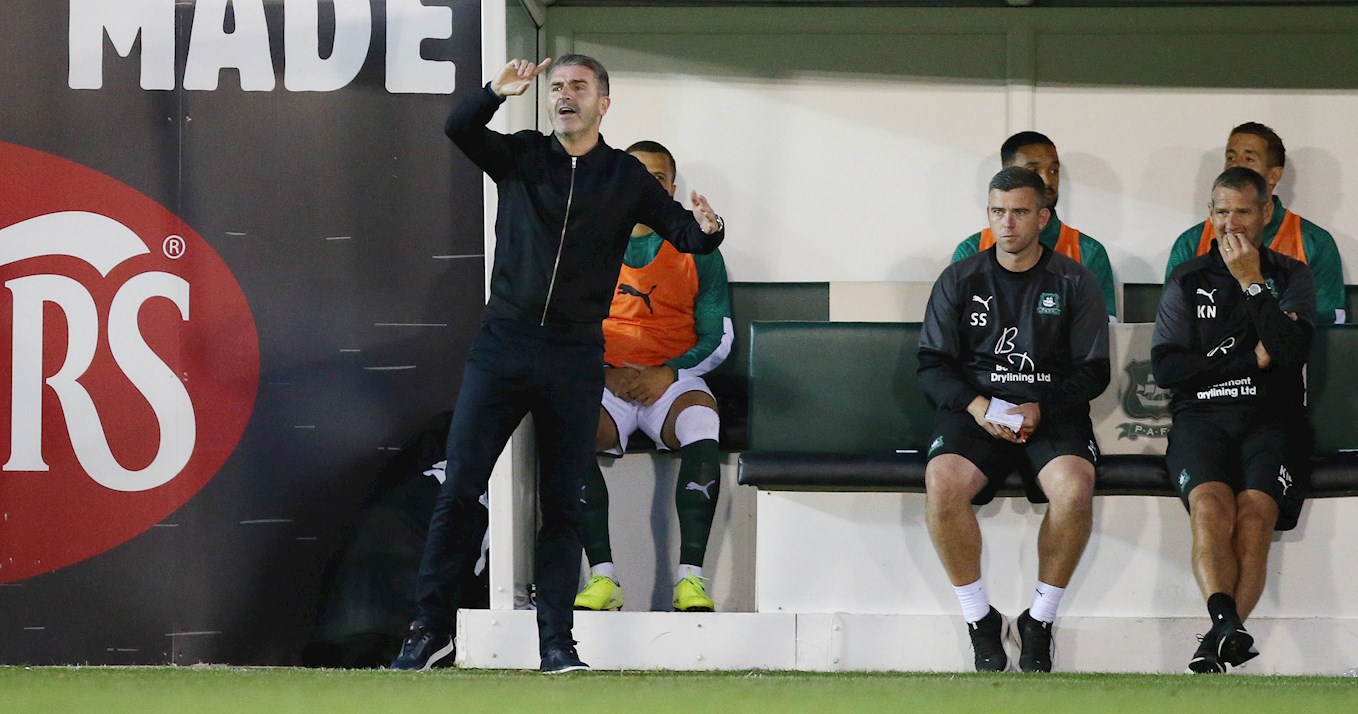 The only two ruled out for the trip to South Wales are forward Joel Grant, who limped off during the first-half Saturday’s victory over Colchester United at Home Park, and Will Aimson, who is still on the comeback trail after missing the entirety of pre-season with a pelvic injury.

Although both players will be disappointed to miss out, there is good news to report on both cases.

“He won’t be available for Saturday, but in the next couple of weeks he’ll probably start pushing – and then I do have headaches because some will probably miss out on the bench. That’s what we want, that’s what we’re here to do, and when you’ve got a good squad like we have, some are going to be happy, and some aren’t.”

Meanwhile, there were fears that Jamaican forward Grant had suffered another serious muscular injury, having been ruled out of most of last season with a similar complaint. Fortunately for the Pilgrims’ in-form front man, as well as his manager, this appears not to be the case.

“He’s just under a grade two minor tear in his hamstring, we’re hoping he’s not going to be too long, possibly 10 days, maybe,” said Lowe.

“It’s good for Joel and good for us. We got him off at the right time, because he said to me that if we hadn’t have pulled him off he would have carried on. It’s a blessing that we did that; rather than miss him for four to six weeks, we’re probably going to miss him for two – it’s not rocket science.

“Gutted for the lad because he’s been flying – he scored against Crewe and was doing very well against Colchester, but we’ve got other lads in there now who can step up and get an opportunity.”

Dom Telford has been the beneficiary of the opportunity provided by Grant’s injury – and it’s one he’s grabbed with both hands, netting an impressive goal on his first full start during the Pilgrims’ 2-0 Carabao Cup victory over Leyton Orient on Tuesday. He was not the only one, as Josh and Conor Grant, Mike Cooper and Ryan Taylor all made their first starts in the cup, and, by all accounts, did enough to give the manager a selection headache.

“They all did – Ryan Taylor is the same,” said the gaffer. “We want lads, when they get those opportunities, to step in and to do what we ask them to do. The lads out of the team at the moment are pushing really hard to get into it. They’re not only pushing hard, they’re pushing the lads in front of them, but they’re helping them as well. You help your mate, whether it’s your position or not, because we all want the same thing.”