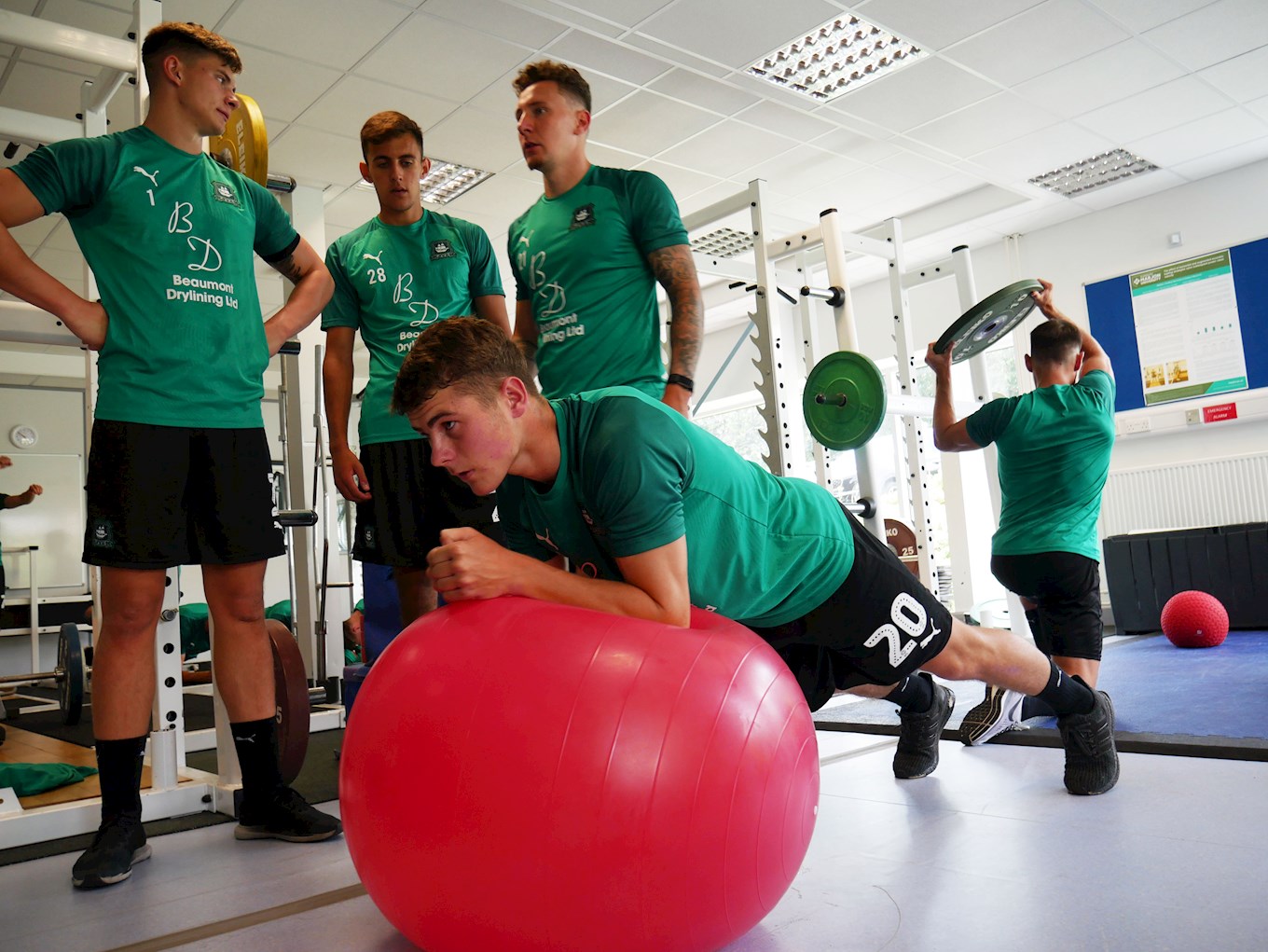 AHEAD of our Sky Bet League Two season opener against Crewe on Saturday, Argyle headed to Plymouth Marjon University for a tune up with our Head of Fitness and Conditioning, John Lucas.

Marjon’s Physiology Lab is accredited by The British Association of Sport and Exercise Sciences (BASES), which means the lab is recognised to be of the highest quality. The lab is the only accredited sport-science lab in the South West, and has hosted several elite sports teams in the past, such as Exeter Chiefs, Plymouth Raiders, and the Namibian National team for the 2015 Rugby World Cup.

The Pilgrims are under new management since last season, and with some fresh faces in team, we have been working hard to enhance their physical performance prior to the upcoming season.

Argyle captain Gary Sawyer said: “With this new regime and our performance coach, it’s been a lot better for us, and we’ve been able to do a lot more of the work we need to do to. Being physically stronger is going to benefit the team, and we’re focusing on playing how the gaffer wants us to. Using the facilities at Marjon and doing this power-based work is going to make us a more powerful and overall, a better side this season.

“I’ve been in the game for a long time now and those pre-season nerves never leave, but we’ve put the hard work in and I’m really looking forward to starting the season. I’m the fittest I think I’ve ever been, and that’s a testament to the work we’ve been doing here at Marjon in the gym and in the labs.”

John Lucas, Head of Fitness and Conditioning at Home Park, has been working the team through their pre-season preparations, including the training sessions that take place twice a week at the University.

He said, “This season, there’s a key focus on fitness. The team have been building their strength as a side and as individuals, and they’ve been working on playing the way the manager wants them to. Being here at Marjon, using the facilities, has enabled us to really focus on the key elements of our game like strength, speed, fitness, agility and power.

“It’s been unbelievable coming up to Marjon and using the facilities, we’re really grateful to be able to come up here. I’ve worked at a few different clubs, and this facility is one of the best I’ve seen in the country.”

Sport and Health Science Laboratory Staff, Ben Anniss and Chris Puleston have been assisting the team in the labs during the pre-season. Chris said: “The facility here is big enough for the team to all train at the same time, which is great. There’s been an amazing atmosphere during their sessions, and it’s been good to see them using our specialised equipment.  It’s been an exciting period, seeing them preparing for their first competitive match.

“Sports teams using the labs at Plymouth Marjon provides an opportunity for the students to get hands-on experience. For example, our students are currently providing sport-science and conditioning support for the Plymouth Raiders basketball team, and we have several exciting student-led projects on the horizon within female football and disability sport. These experiences are key for students studying courses such as Strength and Conditioning and Sport and Exercise Science. Through applied work, they develop key skills and a sense of professionalism before they leave us and head out into the working world.” 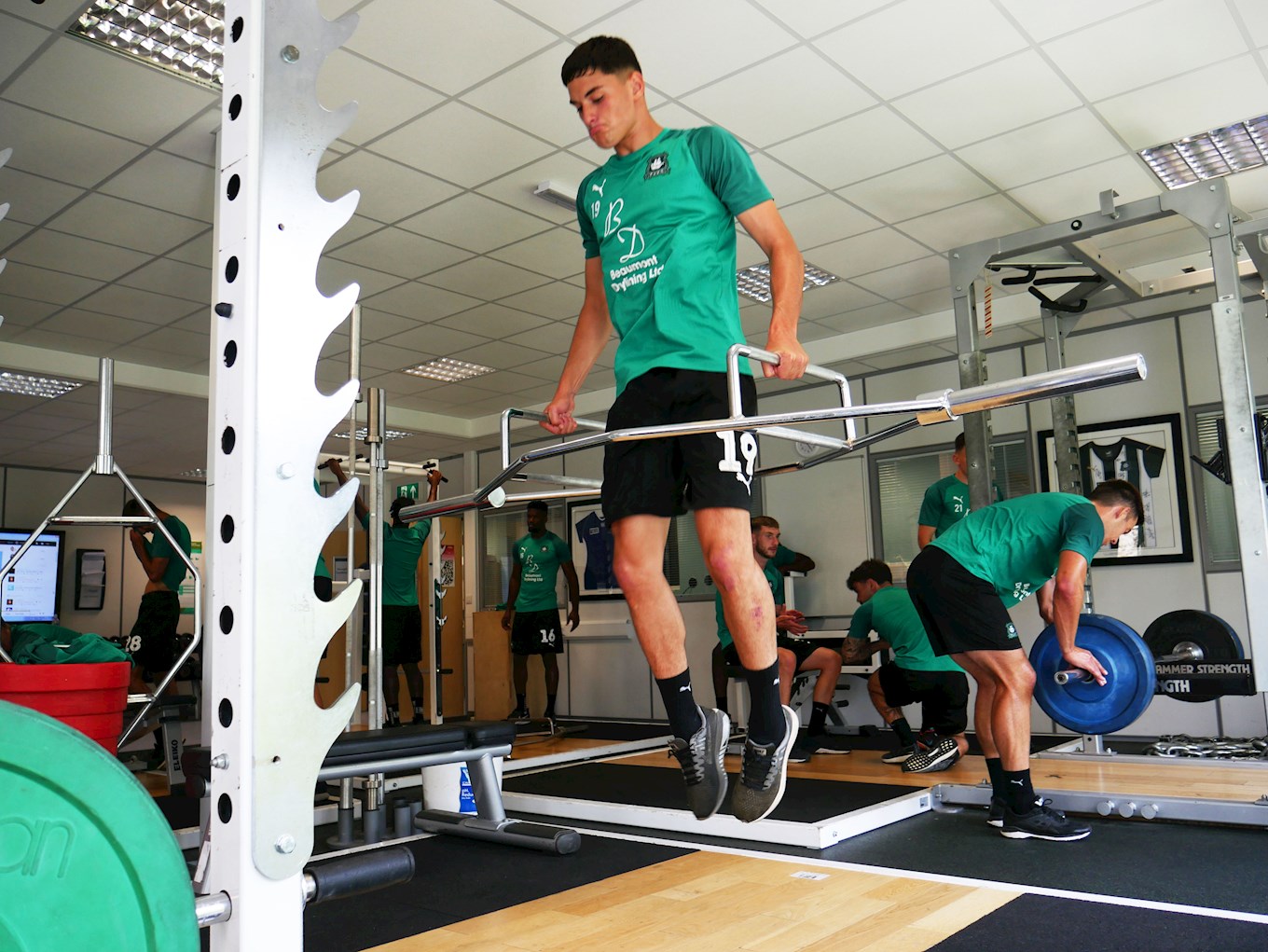 Plymouth Marjon University has a long history of education excellence. It was founded in 1838 in London as the UK’s first teacher training institute. The University is based on a green and spacious campus close to the beautiful South West coast of Devon and Cornwall, the city of Plymouth and Dartmoor National Park.

The institution celebrates a string of recent good news, being named the top university in England for Teaching Quality, and in the Top 10 for Student Experience, by the Times and Sunday Times Good University Guide 2019; being granted a Silver award in the first national Teaching Excellence Framework; achieving a 35% increase in student applications; and latest governmental data (Longitudinal Education Outcomes) showing that teachers who train at Plymouth Marjon become the top earners in the South West and Wales.

The University is recognised as an inviting, friendly university which develops outstanding graduates ready for the world of work. It offers expertise across teaching and education; sport, and health and wellbeing, including various therapies; business; creative arts and psychology.

Plymouth Marjon University is a certified social enterprise with the Social Enterprise Mark. The recently opened business incubator space ‘The Edge’ based within Marjon Business School offers space, advice and a community for business start-ups, including support to their own students.