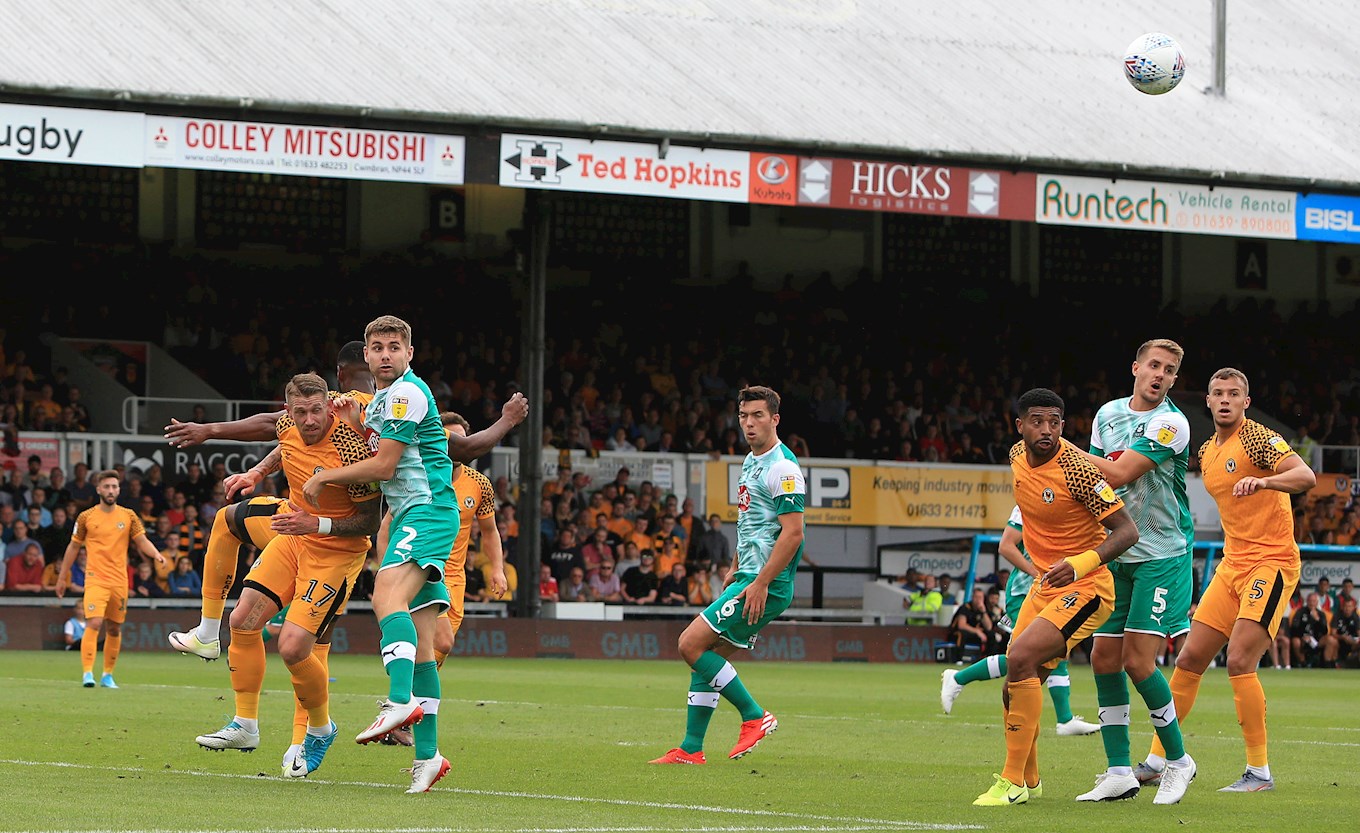 ARGYLE were just ten minutes away from a third successive clean sheet in Sky Bet League Two but succumbed to a 1-0 defeat at Newport following a powerful header from Kyle Howkins.

Defender Scott Wootton was understandably disappointed after the game, particularly as we controlled much of the first period and should have adapted better to a change in system deployed by Newport.

Despite the setback, Argyle go into the midweek visit of Salford with confidence high after the opening wins over Crewe and Colchester.

“We had a good start to the season, six points from six before Saturday,” said Scott. “We said at half-time, minimum is a clean sheet. We feel that we should be winning these games, but if you can’t win, don’t lose. We’re gutted to not win again.

“I thought first-half we controlled most of the game, they didn’t really create that many chances. We had a couple cleared off the line, Joe Riley had a great strike and if they go in it’s a completely different game. Second-half, I don’t think we played anywhere near our best, and ultimately that’s cost us today.

“Long throw, second-phase, a good ball in and the lad’s attacked it well. We’ve had three clean sheets so far, we wanted to get another one, and we’re disappointed about it but we’ve got a big home game on Tuesday [against Salford] that we want to put right and go and get three points.

“I think we controlled early on in the game. Teams are going to do that, the way we play and the quality of players we have, we’re going to take control of games and teams are going to change to try and stop us do that.

“Obviously, he [manager Ryan Lowe] is gutted that we didn’t win, just like everyone. He’s very passionate. He just said that we will dissect it, analyse it, learn from it, talk about the good things we did and things we need to get better at. We’ll go again on Tuesday, it’s a big game and it’s pleasing that we can try and send the fans home happy.

“If we turn up and play to the levels we know we can on Tuesday night against Salford and take the three points, we won’t be worried about the Newport game. There’s so many games coming thick and fast, so you have always got a chance around the corner to put things right.”

The inability to breach the Newport defence was obviously a problem on Saturday and Scotty believes his attacking team-mates will learn how to break down stubborn resistance.

Given the gaffer’s reputation for attacking football, it is only natural for opposing teams to sit deep and it is something the Pilgrims will have to figure out as the season progresses.

“I don’t think it’ll be a problem, but I think it will be a common theme,” he said. “I think we have enough good players, guile and creativity to get through that. Teams are going to sit deep, especially at home, they’re going to sit off us, but we’ve got to be good enough to break them down and score goals. Once we get up in games it’ll be a different story.

“Plymouth Argyle in League Two is a big outfit, and teams will respect us, especially with the start we’ve had. We’ve just got to be good enough to break that down.

“Gutted, really. Three games, three clean sheets so far. Ten minutes away from a fourth. I don’t think they had that much, really. As a team, I think we defended well, if we carry that on throughout the season it will give our attacking players the license and freedom to go and do the goods at the other end. As defenders, it’s our job to keep the back door shut and supply the quality to the attacking players to do their stuff.”