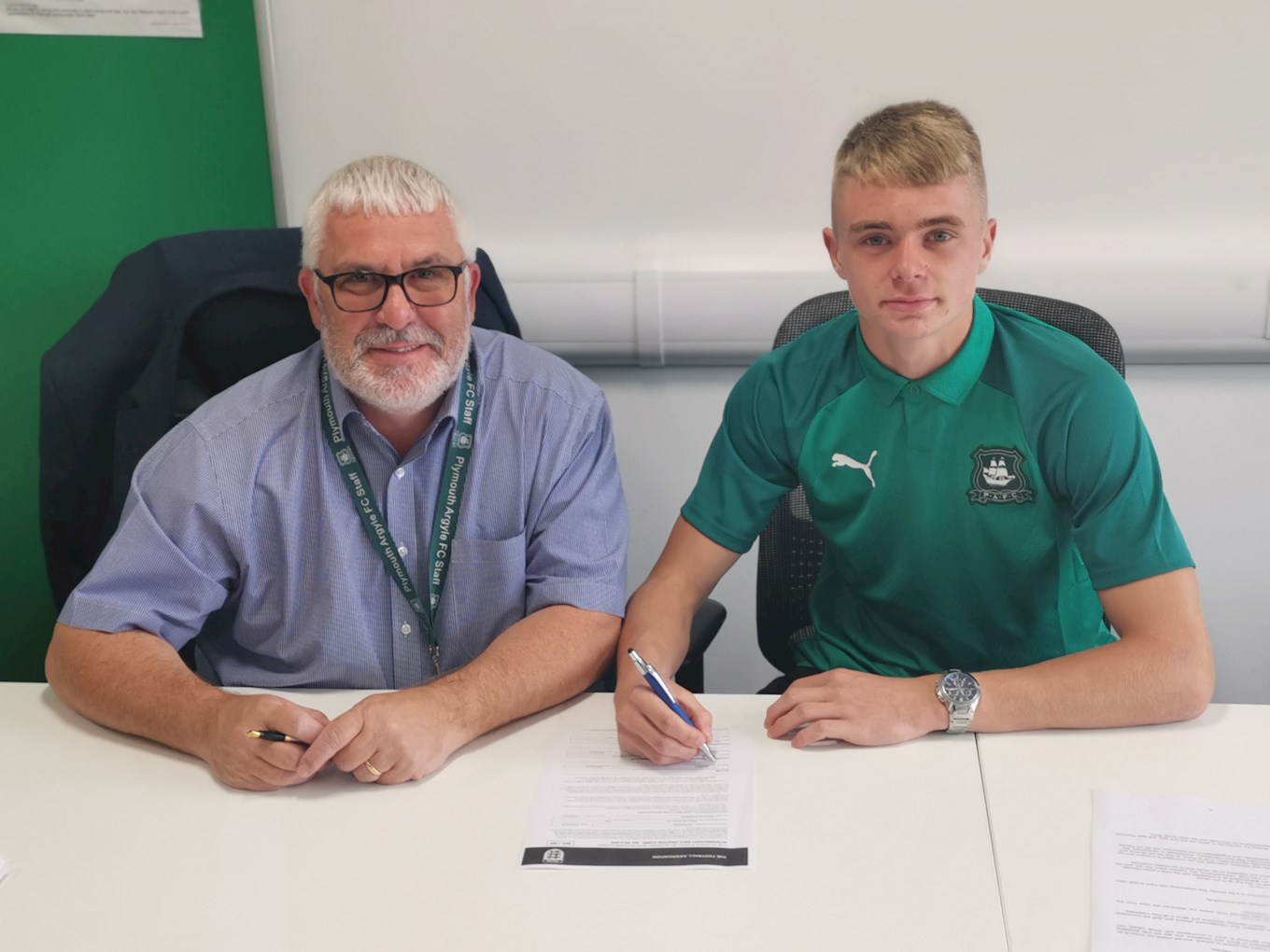 TAKING the scenic route to scholar terms, young goalkeeper Tyler Coombes has signed a deal at Home Park that will see him officially return to the Argyle Academy.

The teenager has already experienced the highs and lows of a career in football, having been a part of the youth set-up at Home Park until the age of 15.

Released, primarily due to his size, Tyler did not give up on his dream, and a string of impressive performances on an ad-hoc basis under Academy Director Kevin Hodges and Manager Phil Stokes has led to a well-earned scholar deal at the Theatre of Greens.

“I was let go after playing at under-15 level,” said Tyler, “so I went and played DJM football for two years. After that, I finished school and joined the [Argyle] Community Trust programme, alongside playing men’s football for Plymstock United seconds.”

Despite no longer having any official affiliation with the club, Tyler remained in touch with the Academy staff at Home Park, and the departure of one of the club’s youth-level goalkeepers provided him with an opportunity to work his way back into the system. He grabbed it with both hands.

“There were two ’keepers and one had left, so it was just Harry [Townsend] left,” he said. “I think he got injured, so there were a few games where he wasn’t able to play. They had no-one else to play, so that’s when I was given the call to come in and help out.

“Now and again, I was getting calls from Kevin [Hodges], asking to come in and help out, with a bit of training involved, so I kept doing that.

”While participating in the youth set-up as an emergency goalkeeper, Tyler continued to pursue his studies with the Argyle Community Trust, hopeful, but not certain, that he would eventually get an offer to return to the fold.

“I did my first year with the Community Trust and when I was getting the calls, we were wondering what was going to happen,” Tyler explained. “Originally, I was training on a Thursday with Rhys [Wilmot, goalkeeping coach] and the first team ’keepers and, if I was needed, I’d play on the Saturday.”

As days of training turned into weeks, then months, Tyler’s hopes of a deal turned into a belief, and he was over the moon when Kevin Hodges told him the good news.

“I spoke to Kevin and just asked him myself what was going to happen and that’s when he told me,” said Tyler, with a proud smile. “It took a long time, it was around seven months that I was helping them out.”

Despite not holding a contract at the time, Tyler made a memorable appearance on the substitutes’ bench of the Pilgrims’ senior side during the 0-0 draw at Tavistock during pre-season.

“I was just coming in, training and helping out and Rhys asked if I was fit, because at that time I was just coming back from injury,” said Tyler. “The gaffer [Ryan Lowe] didn’t want to use both of their ’keepers, so he said there would be an opportunity for me.

It has been a unique journey for Tyler. Having fought his way back into the Academy, he is now keen to make the most of it and realise his dream to become a professional footballer.

“A lot of hard work went into this, but the work starts again now,” he said. “I’ve got to work harder to get where I want to be, and that’s professional.”

We welcome Tyler back to the Academy and wish him all the best.