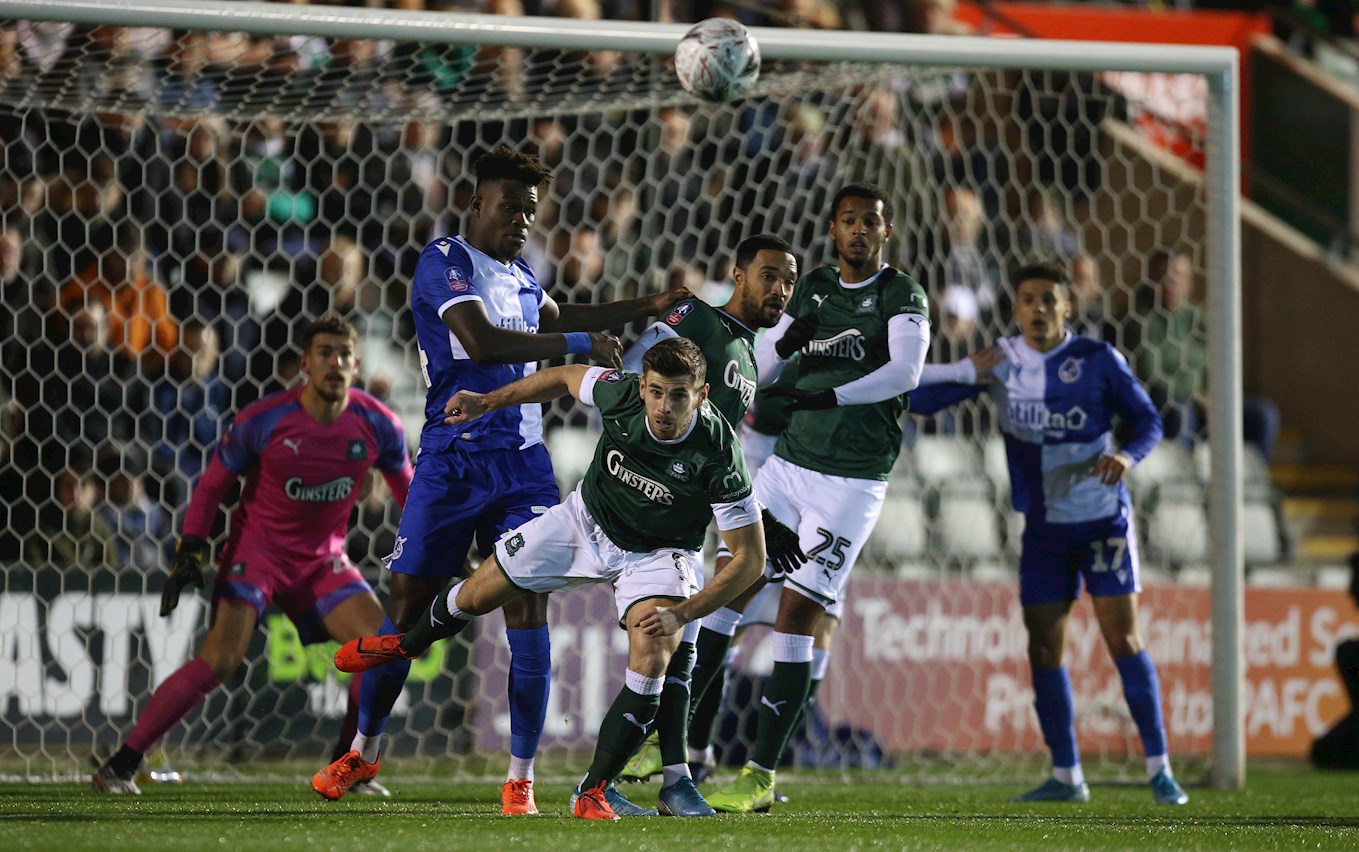 ARGYLE crashed out of the FA Cup in their second-round replay against Bristol Rovers after an undeserved defeat where the scoreline simply did not tell the story of the game.

The Greens dominated the majority of the tie but they just could not find the back of the net despite creating countless chances.

A fortunate second-half header from Alex Rodman, which was somehow the only goal of a game littered with chances, was enough for the away side to progress to the third round.

To sum up the home frustration, the Pilgrims had an effort cleared off the line (or probably over the line) and a penalty appeal waved away in a game, which just wouldn’t go our way.

Argyle boss Ryan Lowe made one change from the side that beat Morecambe on Saturday, with Joe Edwards coming in for Niall Canavan, who was ruled out with illness. Rovers came into the game after a manic 48 hours that saw manager Graham Coughlan leave the club for Mansfield Town.

The away side were the brighter in the opening minutes with Tom Nichols, who came in for injured striker Jonson Clarke-Harris, getting on the ball and miscuing an early shot wide.

Argyle’s first chance of the game fell in the sixth minute when Scott Wootton strolled into midfield and struck a low effort that deflected down to the 'keeper’s right-hand side, which he parried wide.

The Pilgrims went close again in the 13th minute after some brilliant wide play from Byron Moore set up Antoni Sarcevic but his drilled effort whistled just wide of the post.

Sarcevic was involved again just five minutes later when his piercing drive and delicate backheel put it on a plate for Dom Telford but his close-range shot was brilliantly saved down low by Anssi Jaakkola.

The Greens thought their persistence was about to pay off just after the half-hour mark when Telford broke into the box and was about to pull the trigger before Alfie Kilgour slid in from behind, brushing the ball with his toe. There were major appeals for a penalty from the home-side, but the referee said no.

The Argyle first-half dominance continued with more electric wing-play from Moore, who beat his man and fizzed it across goal, eventually falling to George Cooper on the edge of the box but his effort was palmed out for a corner.

The home fans thought their side had taken the lead when Danny Mayor played an inch-perfect through ball to Joel Grant just before half-time. The Jamaican had time to pick his spot, but his finish rippled the side-netting, confusing some sections of the supporters for a split second.

Rovers came out of the interval with the aim to turn the game on its head and they nearly did within five minutes of the restart when Nichols snuck around his man and stooped to get his head on the ball but it was straight at Alex Palmer in the Argyle goal.

It simply wouldn’t go in for Argyle, just before the hour-mark Josh Grant’s header was miraculously clawed off the line by Jaakkola, but the replays suggested the ball had just crept over for what should have been a goal.

Moments later, the ball fell to Cooper on the right-hand side, his deflected effort nearly caught out the Rovers 'keeper, who parried it straight to the feet of Telford with the goal gaping. It summed up the Argyle night that his effort also deflected wide.

Despite constant Argyle pressure, it was the away side that took the lead in the 68th minute when Wootton’s clearance ricocheted off Cameron Hargreaves and into the Argyle box, where Rodman was first to react and looped his header over Palmer to finally break the deadlock.

The Pilgrims continued to create chances, but it was not their day despite dominating large portions of the game and creating numerous goal scoring opportunities, including an effort from Wootton in the final seconds that somehow deflected wide.