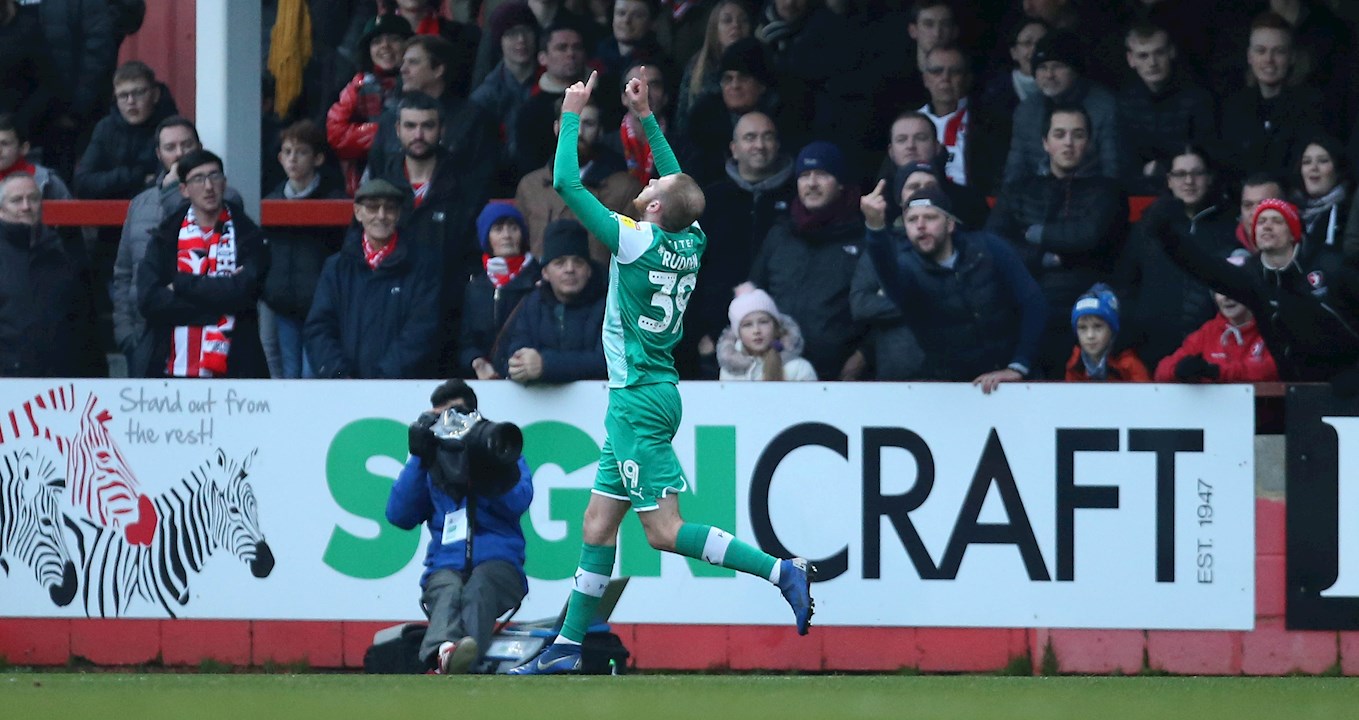 Over 1,200 supporters made the relatively short trip to the Cotswolds to witness Rudden’s 33rd-minute close-range winner, firing home an Antoni Sarcevic pass to lay the platform for a determined and disciplined rearguard action which repressed the hosts’ inevitable second-half fightback.

Perhaps a response to the Pilgrims’ inability to snatch a goal from their countless opportunities against Bristol Rovers last time out, an acknowledgment of a congested festive fixture schedule, or a combination of both, manager Ryan Lowe made three changes to his starting eleven for the trip to the Cotswolds.

The biggest surprises came up front, where Billy Clarke made a long-awaited first league start since joining the club in October, partnering recalled Rangers loanee Rudden – who had himself not started a league game since the forgettable Devon derby defeat to Exeter City on October 26.

Meanwhile, at the back, Niall Canavan had recovered from a sickness bug to take up his position in the heart of the back three, triggering a shuffle that saw Josh Grant move into holding midfield, and Joe Edwards to the substitutes’ bench.

The tone of the afternoon’s play was set inside the opening minute, as both teams’ mirror-image 3-5-2 shape, with high pressing to match, nearly forced an error from back markers. First, the Pilgrims were stretched when Scott Wootton was dispossessed in dangerous territory, before Byron Moore fell a few inches short of racing through on a loose back-pass at the Cheltenham end.

The following skirmishes remained equally frenetic, with both sides seeming more likely to profit from forcing a defensive error or on the counter than to carve out clear opportunities from open play.

A long throw from the Robins’ skipper Ben Tozer, a one-time Pilgrims’ Academy prospect, somehow evaded Alex Palmer and everyone else within the six-yard area, before Wootton’s thumped far-post clearance nearly fed Clarke through for a route one smash-and-grab.

On 14 minutes, the Pilgrims forced their first clear opportunity, and with it came a lick of paint away from grabbing a goal of the season contender – reminiscient of David Fox’s goal at Wimbledon, exactly a year ago to the day.

Surviving on a diet of second-ball scraps in the final third, Rudden hooked the ball towards Antoni Sarcevic, whose sweetly timed half volley arced viciously over Scott Flinders and towards goal, only to kiss the top of the crossbar from the best part of 30 yards.

Rudden and Clarke continued to hassle the Robins’ back three as the first-half matured, each seeing a half-chance slip away. First, Rudden drove a speculative effort at Flinders from the edge of the area, before Clarke was slipped through by Sarcevic. Initially, it looked as though the Irishman was clear on goal, but Charlie Raglan got back well to snatch the ball away as the full league debutant threatened to pull the trigger.

At the other end, Cheltenham’s high press caused problems of its own, with Chris Clements firing narrowly wide from the edge of the area after picking Josh Grant’s pocket on the transition.

It was Argyle, though, that continued to edge a cagey opening period, and Sarcevic’s cross-shot threaded the needle between the far post and chasing Green shirts, before Clarke also saw an effort deflected wide from near the penalty spot.

The Pilgrims subtle, but evident, first-half superiority told on 33 minutes. George Cooper, operating at left-wing back, teased a signature early ball towards the penalty spot. Although the initial delivery skipped narrowly over Rudden’s head, Sarcevic’s timely arrival at the far post enabled him to hook the ball along the goalmouth, where Rudden waited unmarked to sweep the Greens into the lead.

The goal raised a reaction from the hosts, who should have been level just a few minutes later. Gavin Reilly, a name likely familiar to Argyle fans for his devastating last-minute equaliser for Bristol Rovers at Home Park last season, breached the Green defence with a low right-wing cross. Alex Addai, the Robins’ leading marksman, looked to have a fairly simple task in converting the delivery, but the striker seemed to get his legs tangled at the critical moment, dragging his shot wide as he tumbled to the deck.

Cheltenham emerged from the half-time break with renewed enthusiasm, and the Greens had to rely on some brave last-ditch defending to preserve their hard-earned advantage. There were two blocks from captain Gary Sawyer, the first was made with his legs to deny Jake Doyle-Hayes’ shot from ten yards, the second with his head to intercept a Reilly cushioned header that would surely have laid on an equaliser for the hosts.

The adoption of a more aggressive approach from the Robins provided the Greens with more room to counter, and a well-worked move nearly provided a second goal for Rudden, latching on to Sarcevic’s through ball to let off a snapshot which was very nearly deflected past the wrong-footed Flinders.

The hosts continued to press and only a superb last-ditch tackle from Canavan denied Addai a clear shot on goal on 68 minutes, as the Pilgrims failed to clear their lines from a Cheltenham corner.

As the game entered its final stages, Lowe replaced the tiring partnership of Rudden and Clarke with the energy and pace of Dom Telford and Joel Grant, perhaps spotting the opportunity to strike on the break. At the other end, though, it took another superb lunging tackle from Sawyer inside the penalty area to deny Ryan Broom a clear strike at Palmer’s goal.

When the Pilgrim defence was finally breached, they were rescued by poor finishing. Substitute George Lloyd broke free and clear of a fatiguing Green back-line to meet a long ball in behind, but somehow hooked his volley inexplicably clear of the bar from close range.

As the clock ticked towards stoppage time, Chris Hussey’s corner was met by the towering head of Sean Long, who nodded wide from six yards.

Somewhere inside the four walls of the Jonny-Rocks Stadium, injured duo of Luke Varney and Reuben Reid were wincing.