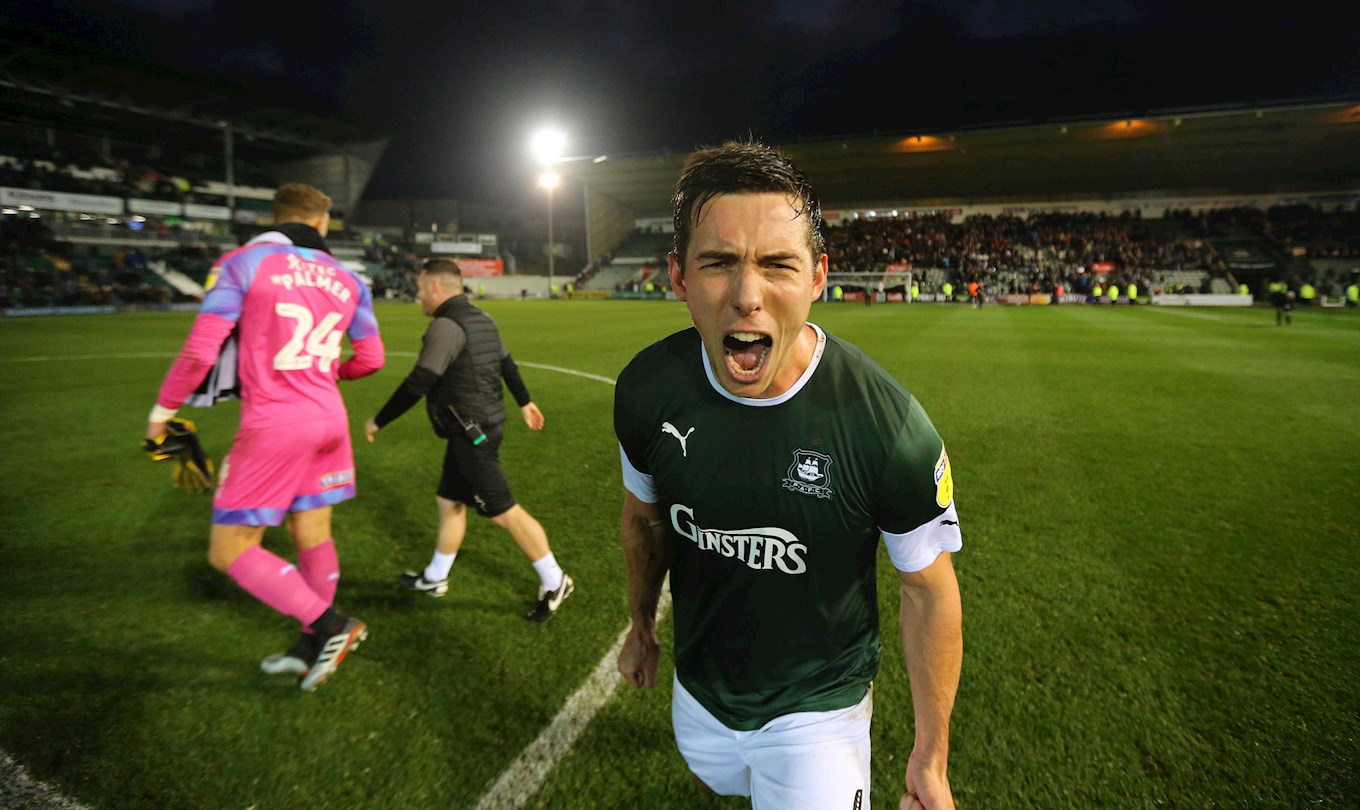 A LATE, late goal from Niall Canavan saw out 2019 in the grand manner, securing the Pilgrims a valuable and thoroughly deserved fifth successive home victory that sends them into 2020 in the Sky Bet League Two play-off spots.

The Greens dominated their final match of the decade in a manner unlike most home games in the previoius ten years. However, they were almost frustrated in their attempts until substitute Conor Grant hoisted an injury-time delivery into the box where Canavan was the coolest head as the ball bobbled around, eventually lifting it into the net to spark some gentle mayhem in PL2 3DQ.

The Pilgrims had taken the lead midway through the first half when Byron Moore’s delivery into the penalty area was helped over Stevenage goalkeeper Paul Farman’s head by a deflection off defender Tyler Denton.

Stevenage, though, repelled wave after wave of Pilgrims’ pressure both before and after Elliott List’s equaliser on the hour to come close to sneaking away from Home Park with a point - before Canavan's dramatic late intervention.

Joe Edwards had been recalled to the Argyle starting line-up in the only change to the side that beat Cheltenham on Boxing Day, with captain Gary Sawyer absent from an Argyle 11 for the first time since mid-September.

Stevenage came to Home Park with four recent 0-0s on their cv but any thoughts that they might just sit in were apparently dispelled as Jason Cowley made the most of a fortunate ricochet to drill in a shot that Alex Palmer, solid as ever and beaten only once in six previous hours at Home Park, had little trouble pouching

Argyle swatted off the incursion and went about their business with a verve that reflected the atmosphere generated by a large holiday crowd.

Antoni Sarcevic let fly with a shot that needed a Boro boot to take it away from the target; Clarke’s perceptive run was snuffed out only late on; and Josh Grant, occupying Sawyer’s left centre-back position, swished at a left-wing corner when even half a connection surely would have burst the net at the Devonport end.

Danny Mayor then played in George Cooper for a full-blooded shot that required considerable bravery from Scott Cuthbert to throw himself into the path of the ball.

The Green tide kept flowing. Mayor, central to many of Argyle’s thrusts, cut inside off the left bye line and fired in the ball low towards Farman’s near post, with the custodian sticking out a right boot to clear the effort.

Such was the Argyle dominance of the first half that the only surprise was it took them until midway through it to get the go-ahead goal.

It stemmed from a superb ball out of defence from Canavan, whose distribution from the centre of the back line this season has been one of the most delightfully unexpected pluses in a campaign of positivity.

Canavan’s pass found Moore galloping away down the right, faced only by Denton, whose desperate lunge as the ball was clipped towards goal changed its trajectory to make a difficult task an impossible one for Farman, who flapped mid-air as the ball dropped over his head.

Relieved of any anxiety, an Argyle side that has not lost at Home Park this season after taking the lead went for the jugular.

Clarke then found space in behind Boro’s overworked defence before being bundled out of contention by Cuthbert’s last-ditch tackle; Cooper was denied a second successive Home Park worldy direct free-kick conversion by Farman’s dive; and Sarcevic shot just wide following a sublime move started by Cooper and continued by Clarke.

Clarke then came closest of all to doubling the margin when he drove into the box and let loose with a drive across the goal that was kept out only by the width of a post.

The only blip on a swaggering first half that simply zipped by in a blur of enjoyment came in the shape of a yellow card for Sarcevic. He has been booked only five times this season, and three of those cautions have come from the same referee, John Busby.

The start of the second half somewhat replicated the pattern of the first, with Stevenage showing a rare bit of attacking prowess that saw Ben Kennedy curl a shot from the edge of the box wide before Argyle came storming back.

Cooper’s forays from left wing-back saw him first set up Sarcevic for a shot on which Boro’s defenders did well to execute a team block, then pick out Moore, steaming up on the opposite flank for a stinging volley that was similarly impeded on its way to goal.

Argyle’s march was then rudely interrupted when Stevenage’s most dangerous player, List, was picked out by a Canavanesque long pass from deep by Ben Nugent and cut inside to fire Boro level, despite Palmer getting something on the shot.

By the last quarter, Argyle had replaced Clarke and Rudden with Telford and Joel Grant, which helped keep up their relentless momentum.

A corner from Cooper found Canavan at the far post, but his header was possibly a little too clean, although powerful, and Farman gratefully punched the ball away.

Substitutions and injuries disrupted second-half proceedings to an extent that frustrated Argyle’s rhythm and the Green Army’s enjoyment (“Are you Wycombe in disguise?” was the inevitable query).

Conor Grant came from the bench and provided fresh impetus, helping to set up namesake Josh for a shot that Farman spilt, only just recovering the loose ball from the predatory Sarcevic.

Then the third Grant, Joel, seized on a mistake from the otherwise imperturbable Scott Cuthbert and smashed in a shot that Farman again looked uncomfortable in dealing with.

Cometh the hour, cometh the Canavan. Nice one, Naz.