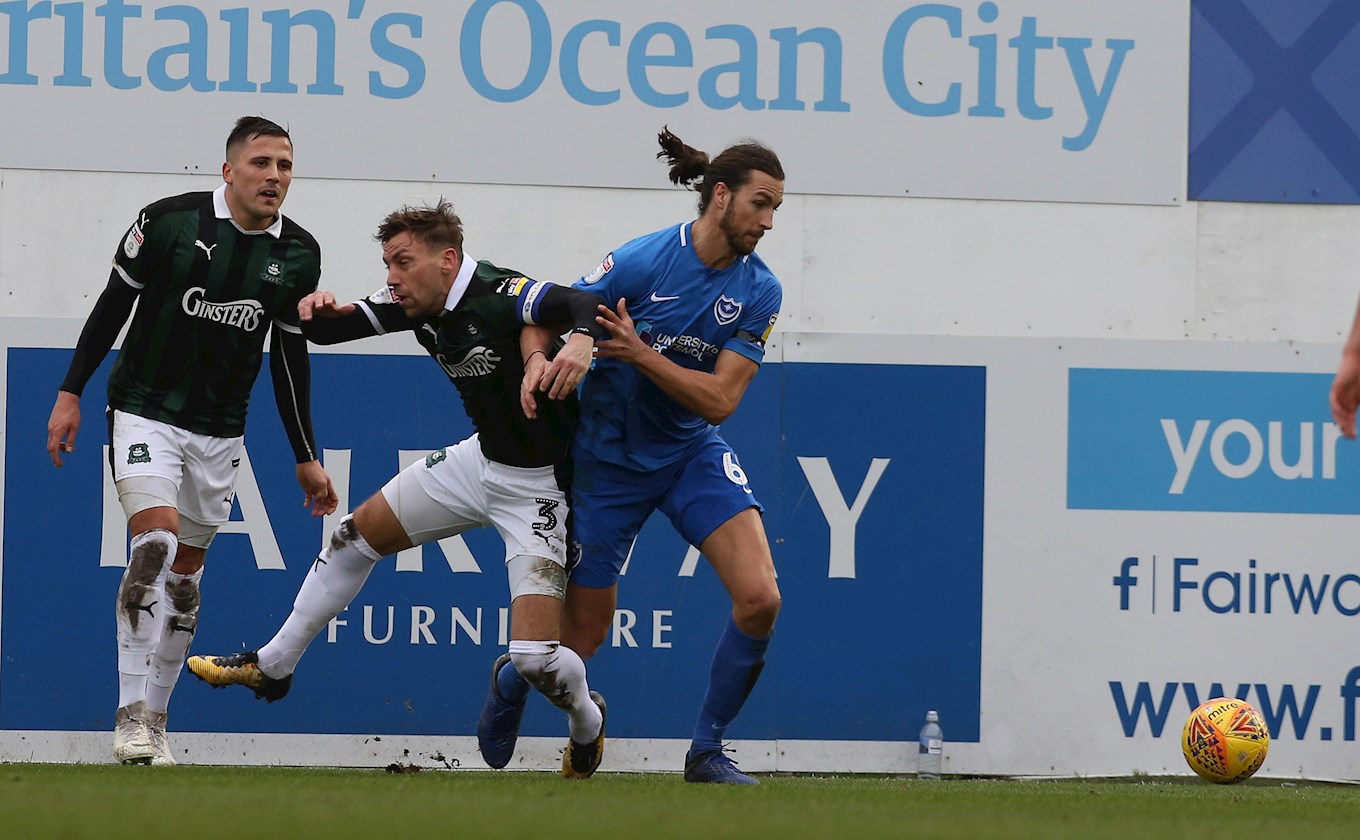 A MOMENT of quintessential Graham Carey magic earned Argyle a point in a pulsating Dockyard Derby at a sold-out Home Park.

The Irishman’s sumptuous free-kick on 70 minutes cancelled out Ben Close’s opener for the visitors, in a game where Argyle, in the end, will feel disappointed not to have won.

This tinkering meant that top-scorer Freddie Ladapo led the line up top, ably assisted on either flank by Carey and Ruben Lameiras – whose red-hot form saw him crowned the PFA League One Player of the Month earlier in the week.

Despite sitting in third in the Sky Bet League One table, Pompey came in to Saturday’s Battle of the Ports having not won since New Year’s Day, at home to bottom side AFC Wimbledon. The visiting manager, Kenny Jackett, opted to reshuffle his deck and with captain Tom Naylor suspended, Bryn Morris replaced him in central midfield.

Meanwhile, there was a recall to the starting line-up for striker Omar Bogle, on loan from Premier League Cardiff City, who was cup-tied for Portsmouth’s midweek FA Cup Fourth Round replay defeat to QPR.

The two clubs have enjoyed a competitive rivalry in recent times, with Argyle and Portsmouth separated by just one position at the end of the last three league campaigns. This season, though, has seen the Hampshire side heavily involved in the automatic promotion race, while Argyle, until winning five of their last six games, had been scrapping it out at the bottom of League One.

The early passages at Home Park favoured neither league position nor form, as Argyle, backed by a vociferous sell-out crowd, grappled with Pompey in swirling winds. The closest Argyle came in a tight opening ten minutes was a Graham Carey through ball that just failed to find Antoni Sarcevic, while the visitors had a couple of set-piece efforts that the Pilgrims’ defence dealt with comfortably.

In a tense affair, with two five-man midfields operating with a fast-pressing style, space to operate was at a premium. David Fox and Songo’o, operating at the base of the Argyle midfield, did their best to switch the ball out to the wide duo of Carey and Lameiras, while Portsmouth responded in kind, sending probing balls down the channel for Jamal Lowe and Ronan Curtis to chase.

Neither side had registered a shot on target by the time Argyle generated their first meaningful effort on 30 minutes. Carey, who had switched to the right flank in search of a pocket of space to work within, weaved into the box and clipped a ball up to the far post, but Gary Sawyer, marked by Lowe, couldn’t get his head on it.

Pompey responded, and while Argyle were momentarily down to 10 as Sarcevic received treatment, Nathan Thompson scuffed a strike across the Argyle six-yard box from a narrow angle. At this point, such were the fine margins within the territorial battle, neither goalkeeper had needed to make a save.

From a set play, that so very nearly changed. Fox, midway through the Pompey half, played a short quick pass to Lameiras on the left wing. The Portuguese drove past his marker to the by-line where his low cross found Niall Canavan 10 yards out. The Greens’ centre-half clipped the ball goalward, but a crucial deflection took it agonisingly wide of Craig MacGillivray’s far post.

Moments later, encouraged by their foray into enemy territory, Argyle pressed again. Ryan Edwards won possession in his own half, before making a marauding run into the opposite half. He laid-off to Ladapo, who, with his back to goal, shrugged off his marker and struck a speculative effort over the bar from 25 yards.

As half-time loomed, Argyle custodian Kyle Letheren was finally called into action, albeit nominally, as a Gareth Evans free-kick was headed towards goal by Matt Clarke. Fortunately, it was at a comfortable height and straight at the Welsh stopper. The referee blew for half-time shortly after.

Argyle began the second-half with purpose, but Portsmouth were also exhibiting plenty of character of their own. Carey’s goalbound effort was deflected away from goal before Pompey launched an attack of their own. On the counter, a good cross from Lee Brown found Omar Bogle, but his header was again comfortable for Letheren between the sticks.

In a game that was beginning to be levered open, Argyle created a super opportunity after dogged work from Lameiras and Sarcevic on the right flank. The ball, under pressure from several bodies inside the Blues’ box, eventually fell to Ladapo, whose effort was destined for the roof of the net before a deflection carried it over.

Both sets of supporters ratcheted up the volume in a packed, albeit three-sided, Theatre of Greens as they sensed the game moving into a critical phase. Pompey responded, as they often do in these ties, through Ronan Curtis, whose drive inside from the left flank and 25-yarded strike was tipped wide by a Letheren at full length.

From the resultant corner, the visitors grabbed the lead. The original centre was cleared, but fell kindly for Close, who drove a low effort through a host of bodies and into the corner of the net.

Argyle responded with a Fox effort from the edge of the area that fizzed over the bar, after good work from Lameiras and Sarcevic on the left-flank.

The problem, though, with chasing an equaliser in a tight game such as this one, is that space begins to appear at the back. Keen to relieve pressure, a clearance from the Pompey back line released Bogle. The forward looked to be one-on-one with Letheren, but Edwards found a way to get back and intercept just before Bogle let fly. It proved to be the Cardiff loanee’s last action, as he was replaced by Oli Hawkins moments later.

Tempers began to flare in a fixture that is never too far away from simmering; and Argyle gaffer Derek Adams was shown a yellow card for his vociferous objection to Gareth Evans, who had been booked moments earlier, booting the ball away to prevent a quick Argyle free-kick.

There was nothing Evans could do to stop the Greens moments later, though, as Carey curled a glorious free-kick into the top-corner from 25 yards to bring Argyle deservedly level on 70 minutes.

The game, if it were quiet in the first-half, was now the opposite. End-to-end football ensued, and a deflected Lameiras effort landed inches wide of the far post as a resurgent Argyle sensed that their first win over Portsmouth since the 2016 play-offs was now a distinct possibility.

Adams moved to bring on Ryan Taylor, who had a spell at Portsmouth earlier in his career, for Ladapo as the Greens searched for a winner against their labouring visitors.

Carey, now appearing to be everywhere on the pitch, brought the Green Army to their feet with a sublime piece of around-the-back skill to set Sarcevic in, but the midfielder took just a moment too long to set himself for a shot and the opportunity slipped by. Moments later, substitute Taylor couldn’t quite guide Lameiras’ low cross onto the target, as Argyle seized territorial control.

Further efforts from Taylor, Sarcevic and Lameiras were denied by Pompey’s last-ditch defending efforts, and the visitors seemed to be running on fumes by the time Ben Toner blew the whistle to bring the 105th Dockyard Derby to a close.