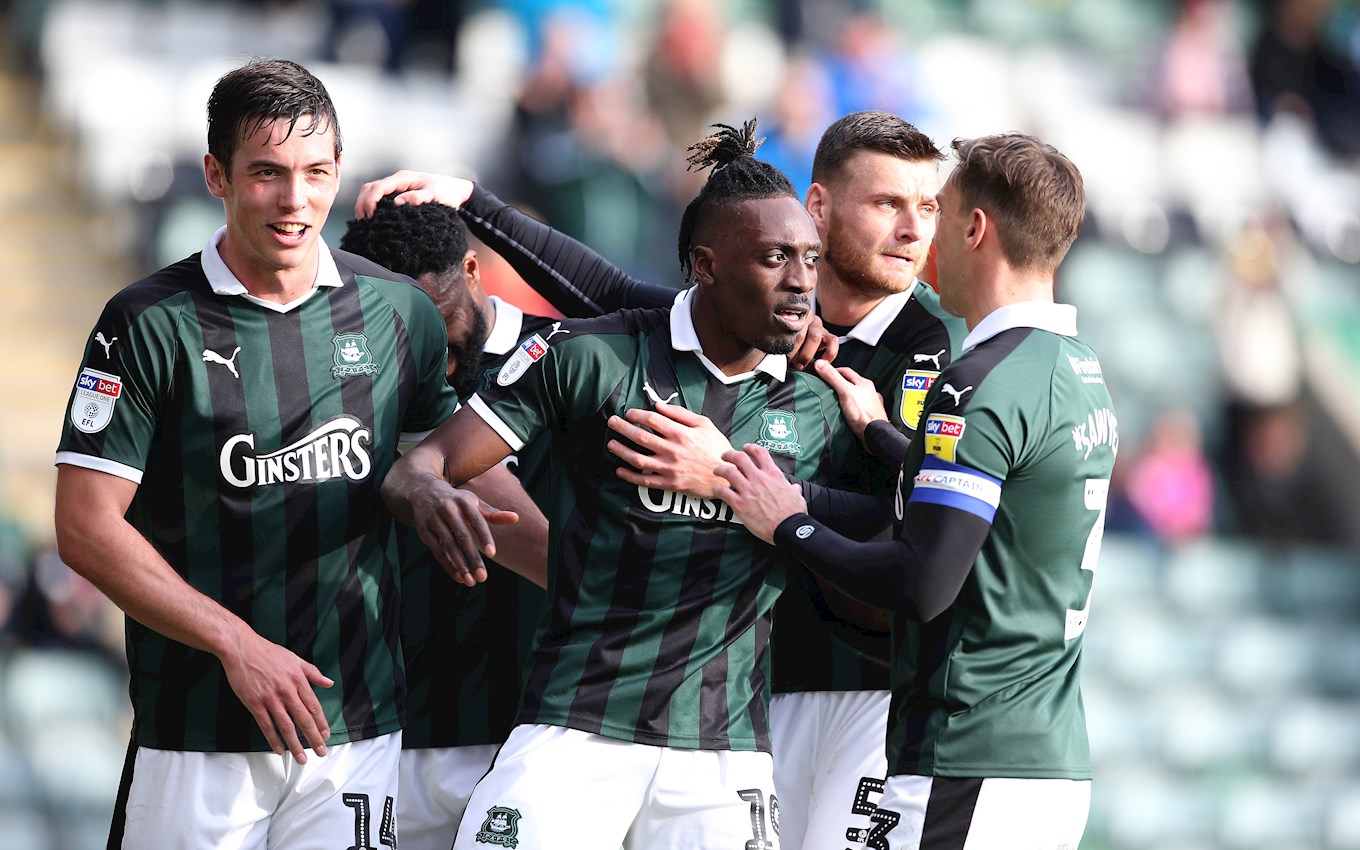 FOUR second-half goals, including a first in Green for Ashley Smith-Brown and a first of the spell for Oscar Threlkeld, gave Argyle a thumping win over 10-man Rochdale.

Freddie Ladapo opened the scoring in a first-half where Argyle should have been out of sight, before Matt Done levelled for the visitors shortly after half-time. Rochdale were reduced to 10-men on 58 minutes when Ethan Ebanks-Landell was handed a straight red for denying a clear goalscoring opportunity with his hand. The cost for the visitors’ centre-half, and Rochdale collectively, amounted to quite a bit more than the value of his intervention.

The Greens approached the tie four points and four Sky Bet League One places above Dale, who suffered a last-gasp 4-3 defeat at the hands of basement side AFC Wimbledon in midweek. Both clubs had endured contrasting starts to the calendar year, with Argyle only losing one game in 2019, while their visitors have won just once since the year began.

With that in mind, it was little surprise to see Argyle manager Derek Adams keep faith in the selection that has served him well of late, which meant January signings Oscar Threlkeld and Lloyd Jones were still awaiting their full first-team debuts. The solitary Green change occurred on the bench, where new signing Paul Anderson replaced youngster Luke Jephcott.

Meanwhile, Derek’s opposite number, former Pilgrim centre-half Keith Hill, brought in Ryan Delaney and Rory Holden; looking to rediscover early-season form that seemed to indicate a relegation battle was not on the cards. Alas, it may well be now.

Fortunately, for both sides and the Home Park crowd, there was no repeat of the hailstorm and freezing conditions that made playing football so difficult in Argyle’s 2-1 win at Rochdale a couple of months ago. Instead, Home Park was awash with blue skies and spring sunshine as Graham Carey got the game underway.

From the off, the Greens looked to get their teeth into a Rochdale defence which is the leakiest in the division. Dale, clearly aware of their own mortality, retreated into their own half for the early exchanges, keen to avoid succumbing to an early blow. It wasn’t until the tenth minute when Dale conjured up anything of their own, as Done chased a breakaway ball in behind Ryan Edwards, forcing Eddy to turn behind for a corner.

Having survived the opening skirmishes, the visitors tentatively raised their guard, and after some good play down the left flank, Ethan Hamilton was presented an opportunity to shoot from 25 yards, which he sliced well wide. At the other end, Carey fizzed a similarly ranged drive over the bar.

The game in no way resembled the return fixture at the Crown Oil Arena in December, with both teams expressing themselves through fast counter-attacking passing moves, largely on the almost-carpeted Home Park surface. The Pilgrims looked lively, without being at their sharpest, in the opening quarter of the game, with Antoni Sarcevic, in particular, finding space to operate between Dale’s midfield and defensive banks.

It was Yann Songo’o, though, that came closest to opening the scoring for the Greens, when his curled left-footed effort from the edge of the area was tipped wide by Lonergan, after a neat lay off from Freddie Ladapo. It served, perhaps, as the catalyst for the home side, who seemed to crank through the gears thereafter.

Awakened, Argyle pressed for an opener. Carey’s 20-yard drive was palmed away by Andy Lonergan, only for Smith-Brown to collect the rebound and deliver a pinpoint far post cross for Gary Sawyer, whose half-volley was smartly turned away at the near post by the increasingly busy visiting stopper.

No matter, though, as Argyle were ahead seconds later. With his back to goal, Ladapo received a low pass and controlled with aplomb, before shrugging off his marker just inside the area. With no more than half-a-yard to work with, Ladapo curled the ball, emphatically, into the top corner to bag his 14th goal of the campaign.

Argyle should have been two ahead on 34 minutes, when a superb passage of play, involving Carey, Lameiras, Sawyer and Fox, saw play shifted from right, to left, and back again. The move culminated in Lameiras’ low cross finding Carey unmarked at the back-post, and the Irishman will no doubt feel he could have done better as he cushioned the ball straight at Lonergan.

Before half-time, the Greens pressed again in search of that all-important second, with Lameiras again involved. Smith-Brown’s inch-perfect through ball sent the Portuguese through on the right, and he laid off to Ladapo on the penalty spot. Keen to share the opportunities around, Freddie laid off to Sarcevic, whose curling left-foot finish drifted inches wide.

With the weather improved and Argyle playing something akin to exhibition football, the Green Army could be forgiven for mistaking the first-half for a pre-season knockaround. A beautiful team move, which involved almost every outfield player and consisted of around 30 passes, saw Sarcevic’s drive tipped wide once again by Lonergan – whose heroics in the visitors’ goal denied what surely would have been the Pilgrims’ team goal of the season so far.

If there were to be one complaint as referee Chris Sarginson blew his half-time whistle, it was simply that Argyle should have been out of sight, such was their complete territorial dominance.

This was not lost on Rochdale manager Keith Hill, who, appreciating that his side were still alive in the tie, gambled with the attack-minded double-substitution of Calvin Andrew and Bradden Inman at the beginning of the second-half.

With the half-time Bovril still too hot to drink, the visitors drew level, but it was not down to any tactical effort on Keith Hill’s part. Edwards, retreating back towards goal with the ball under complete control, sold his back-pass to goalkeeper Letheren short, and Done stole in to lift the ball over the Argyle ‘keeper. Just like that, all of the Greens’ first-half dominance had been rendered moot.

Finding themselves recipients of some extremely good fortune, and now lined up to attack, Rochdale were a different proposition for a visibly smarting Pilgrims as the second-half developed. Hoping for lightning to strike twice, the visitors lifted a series of long balls over the top of the defence for Done to chase.

Momentum is a funny thing, though, and with Argyle finding themselves in an increasingly challenging game, they received a timely boost. After a lovely exchange in the midfield and a pass from Lameiras that looked to have sent Ladapo through, but for the hand of Ebanks-Landell. Referee Sarginson spotted it, and after a brief conversation with his assistant, sent the Dale centre-half for an early bath.

Argyle, now bounced back off the ropes and well and truly throwing the punches, retook the lead. The Greens, ploughing forward in search of their second, bombarded the opposition box, and when a defensive clearance was charged down by Carey in the box, it fell fortuitously for Edwards, who buried his salvation into the bottom corner.

Some players’ mistakes define their careers, while others never recover. For Ryan Edwards, though, all was forgiven after a paltry 13 minutes.

The Greens continued to pour forward in search of the two-goal cushion you sense could have prevented the second-half scare, but Rochdale were committed to whatever jumpers-for-goalposts formation their numerical disadvantage and one-goal deficit allowed. It made for frenetic, if not entirely comfortable, viewing.

ASarcevic, who had been doing incredibly well to manage a run of games on nine yellow cards, finally broke the threshold when referee Sarginson deemed him to have simulated contact in the Rochdale penalty area. He will now, appeal notwithstanding, miss the upcoming games against Sunderland and Luton.

On 75 minutes, after all the ups and downs of a Saturday afternoon’s football, Argyle finally secured the all-important two-goal advantage, when it was Rochdale centre-half Ryan Delaney’s dalliance, in a similar position to that of Edwards, which allowed Ladapo to sweep the ball home in front of the Devonport End for yet another League One brace.

Oscar Threlkeld replaced David Fox on 81 minutes, ending a long wait for his first competitive minutes at Home Park since his January move from Waasland-Beveren. With his first touch at Home Park this season, he buried a rocket into the far corner of Lonergan’s goal to put the game beyond any reasonable doubt, after excellent work from Lameiras. Needless to say, he was mobbed by his team-mates.

There was even time for two more debuts, with Paul Anderson and Lloyd Jones replacing Carey and Niall Canavan with moments remaining. Smith-Brown added the icing to the rather large cake with his first goal for the club when he curled a vicious right-footed strike into the top corner with virtually the last kick of the game.