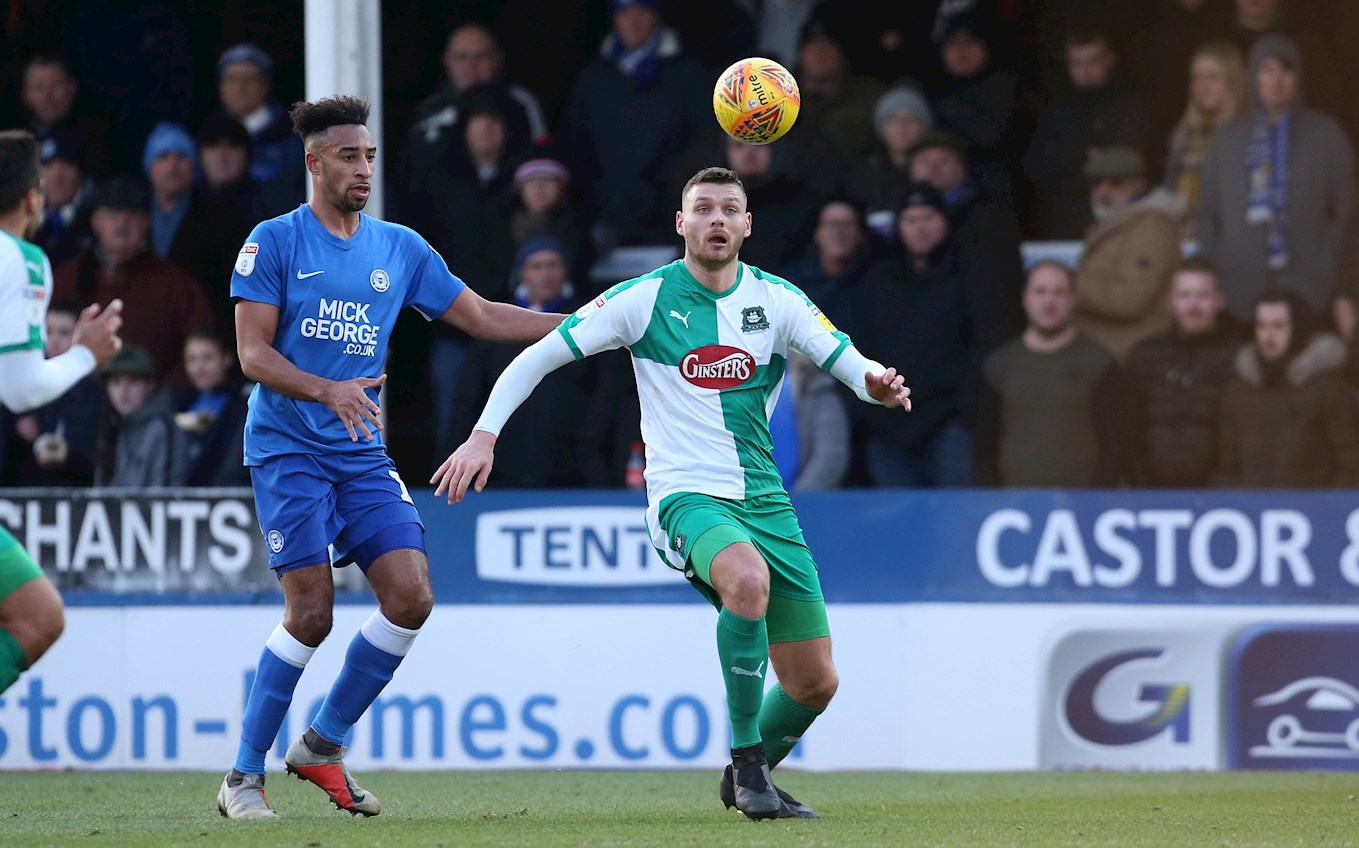 ARGYLE played a game of patience after Peterborough lost at cards to win three points with a tenth goal of the season from Ruben Lameiras.

The Pilgrims played the entire second half against ten men after Posh midfielder Lee Tomlin had rudely fouled Graham Carey and Ryan Edwards in quick succession to earn a red card.

The home side proved solid in their disadvantaged state until two minutes from time, when Lameiras trumped their best efforts with an ace of a goal.

Argyle manager Derek Adams, mindful, perhaps, of the preference of newly re-installed Peterborough counterpart Darren Ferguson’s penchant for a diamond midfield, made the first alteration to an Argyle starting line-up this year.

After four successive wins from New Year’s Day and the previous week’s scrappy defeat at Wycombe, Adams decided upon a single change to the settled and in-form side, recalling Ryan Taylor to the scene of where he and his club was dealt a severe and painful early blow last season.

The man to make way for Taylor was Yann Songo’o and not, if the move had been like for like in nature, Freddie Ladapo, who was at the ABAX Stadium large as life, and not on Wearside or in Hampshire. Or at Plymouth Life Centre.

Intriguingly, if Argyle’s selection had been with one eye on what Peterborough might do, so, it seemed, the Posh 11 might have been chosen to try to combat the Pilgrims’ previously go-to 4-2-3-1.

Gone from the midweek 2-2 draw at Graham Coughlan’s Bristol Rovers was No.9 Matt Godden, a double scorer when Posh, under Steve Evans, won 5-1 at Home Park in August, and, less surprisingly, midfielder Kyle Dempsey. In their stead came wide attacking players Siriki Dembele and Joe Ward.

Whatever had been in the minds of the managers pre-match, five minutes into the game, the two sides were matched diamond for diamond, with Dembele partnering Ivan Toney in the Posh vanguard.

Toney, it was, who both created and nearly finished the first clear goalscoring opportunity after an opening ten minutes in which as much aesthetically pleasing football was played as had been the case in the entire 90 at Adams’ Park a week previously.

Having drawn a fortuitous foul from Ash Smith-Brown, an elaborate free-kick routine ended with Toney curling a shot from just outside the penalty area that initially looked to have the better of Kyle Letheren in much the same way as Conor Chaplin’s similar effort for Coventry recently had. Not this time, though, with the Welsh custodian leaping to beat the attempt away.

Argyle were being patient at both ends, measuring their passes and timing their runs. Ladapo and Taylor each had a shot blocked which was followed by a lovely piece of individual skill from Antoni Sarcevic that set up Lameiras for a deflected drive.

Back came Posh with a cute lofted, angled shot that Letheren tipped over the crossbar before the Pilgrims’ goalkeeper then just about won a one-on-one after Dembele had been slipped in behind the back line.

Argyle finished the half strongly, demonstrating, again, the pleasing tendency they have of upping their game as they grow into it.

Contrastingly, Posh ended the first 45 down to 10 men, and were lucky not to begin the second 45 with only nine.

Tomlin had maybe been fortunate to avoid a straight red after kicking Carey in the final minute of the half, and he had no real argument when he picked up a second yellow card immediately afterwards for barging into Edwards after referee Peter Wright had blown for a foul on the Argyle defender by Toney.

Toney carried on his argument with Edwards as the players returned to the dressing-rooms at the end of the half, backing up his verbal protests with physical action directed towards the Pilgrims’ centre-back, with Adams also copping some as he tried to prise the pair apart. Wright and his officials surely cannot have seen what went on for the referee took no action.

Argyle started the second half with a couple of speculative long-range efforts, but undermanned United gave notice that they were not going to resort to full-on defence with a couple of raids down the left that resulted in testing crosses.

The Pilgrims attempted to maximise their numerical advantage by moving the ball – and, hence, Peterborough – around. The quicker they did that, the more threatening they looked, and Taylor probably had more time than he realised when Carey picked him out for a header that flew over.

The half-chances began to mount up. Taylor was denied from feeding on Lameiras’s near-post cross; Ladapo headed David Fox’s corner over; Fox’s free-kick was beaten out by goalkeeper Conor O’Malley.

However, the further that Peterborough got into the game without conceding, the more one sensed that they sensed they could get more out of the game than a point. As with most teams in their predicament, they looked to relieve the pressure by winning a free-kick and then exploiting possession from set-pieces.

Argyle sent on Luke Jephcott for Taylor, presumably to add some pace to their possession, but Peterborough continued to fashion the more dangerous, though less frequent, openings. Edwards, who had been booed by the crowd for the entire second half, made a fine clearance from Ward’s cross as Toney lurked.

Carey came close for the Pilgrims when, after Lameiras had been fouled virtually on the bye-line on the right edge of the penalty area, he whipped in a direct shot that just cleared O’Malley’s far post.

Then, another period of keep-ball from the Pilgrims, working it out wide and in, and, when the clearance came to feet, repeating the process.

Eventually, the ball fell to Lameiras, who picked his spot and found the corner of O’Malley’s net with a whipped shot across the goalkeeper.