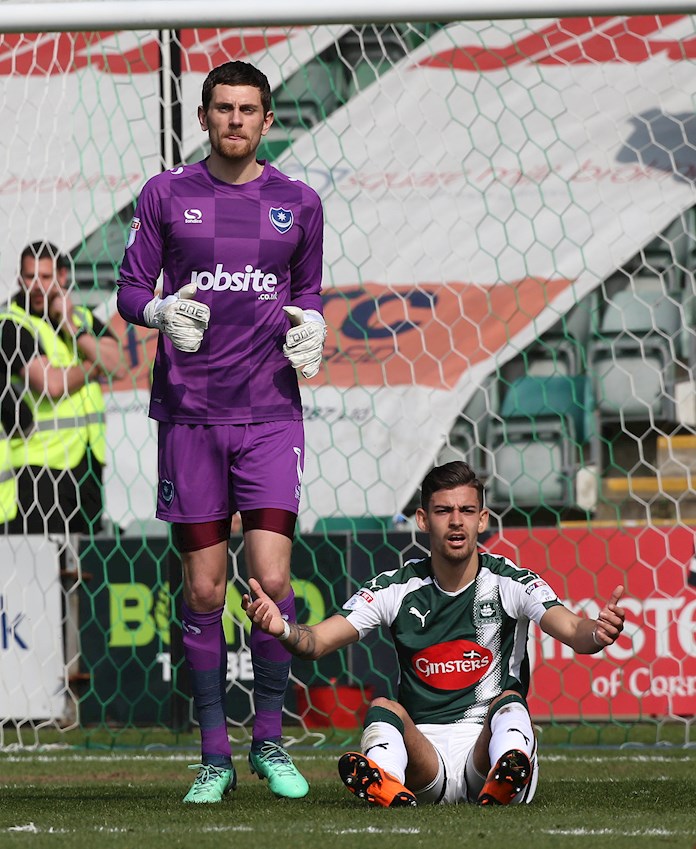 THE last time the two teams met, in September at Fratton Park, the Pilgrims went down to a 3-0 defeat in which Ronan Curtis scored twice and Jamal Lowe once.

PORTSMOUTH’S win in the previous meeting between the two sides this season maintained Pompey’s second-placed position in the Sky Bet League One table after six matches, with 16 points, while Argyle remained bottom of the table, with two.

SINCE that game, the Pilgrims have picked up 34 points from their next 25 matches, which has seen them move into mid-table. Pompey have earned 42 points from their subsequent 24 games and dropped to third place.

POMPEY have won only once at Home Park in their last seven attempts, which came at the start of the 2015-16 season. The last meeting between the two sides at the Theatre of Greens, in April last year, ended in a 0-0 draw.

PORTSMOUTH boast the best away record in Sky Bet League One this season, having amassed 30 of their 58 points away from Fratton Park. They have lost three times in their 15 matches on the road – at leaders Luton (3-2) and at low-ranked Gillingham (2-0) and Oxford United (2-1).

THE only other away game in which Portsmouth have failed to score is at Doncaster, where they drew 0-0.

ARGYLE go into the game having won five of their last six matches, including their last three at Home Park (Walsall 2-1, Coventry City 2-1, and Oxford United 3-0) and having picked up 16 points from the last 21 available.

PORTSMOUTH come to Home Park without a win in their last four league matches and having lost successive away games, at Luton and Oxford. They were also knocked out of the FA Cup in midweek after a fourth-round replay at QPR (2-0).

FOLLOWING confirmation that the body recovered from the English Channel has been formally identified as Cardiff City player Emiliano Sala, players from both sides will be wearing black armbands as a mark of respect.

WITH more than 12,000 crammed into three-sided Home Park on Saturday, the latest naval engagement is set to be another cracker at the Theatre of Greens. To help you plan your day, we are offering the following advice:

THE game is SOLD OUT. Please do not attempt travel to Home Park, or attempt to gain admission, if you do not have a ticket.

FOR the first time this season, the new Ticket Office will be open on a match-day, from 9am. The Ticket Office has moved from the bottom of the Higher Home Park Car-Park to the Devonport end of the ground, behind the 1930s art deco facade.

ALL tickets for collection for Argyle supporters will be available from the Ticket Office. Travelling Portsmouth fans will be able to collect their tickets from the Barn Park end.

THE match kicks off at 3pm. However, it would help you, and us, if you could please arrive early and ease the anticipated pressure on the Home Park turnstiles.

USE public transport, whenever possible.

FREE car-parking is available adjacent to the ground, but this will fill up very early. Street parking in the area is available, but please take care to note local restrictions.

SUPPORTERS may be searched on entry to Home Park. This will include the use of search wands.

PLEASE make sure you sit in the seat that corresponds to the number on your ticket. Tickets will be rigorously checked to ensure this. Anyone found in a seat or an area where they should not be will be ejected from the ground.

SIMILARLY, any supporter sitting in, or attempting to gain access to, any area of Home Park reserved for opposition fans will be ejected.

THE new Argyle Superstore at Home Park is also open for business on a match-day for the first time this season. Situated alongside the Ticket Office at the Devonport end of the ground, behind the 1930s art deco facade, this will also be open from 9am.

THE Superstore will be offering a half-price scarf to the first 200 customers on match-day.

AS well as a huge selection of Argyle products, for all ages and sizes, the Superstore will be running the latest of its popular Match-Day Mania promotions – available only on Saturday and only from the Superstore – 40% of the entire PUMA training range.

THE award-winning Pilgrim match-day Programme, costing £3, will be on sale from the Superstore, around the ground, and on line.

FOLLOWING incidents involving smoke bombs and missiles in our recent games at Southend and at home to Coventry City, the Football Association has warned the club that it may have to consider disciplinary action if they receive further reports of spectator misconduct. Under the terms of the EFL Club Charter, and our club policy, any fans being found guilty of possession or use of a pyrotechnic device will face a minimum three-season ban from Home Park and all other EFL grounds.