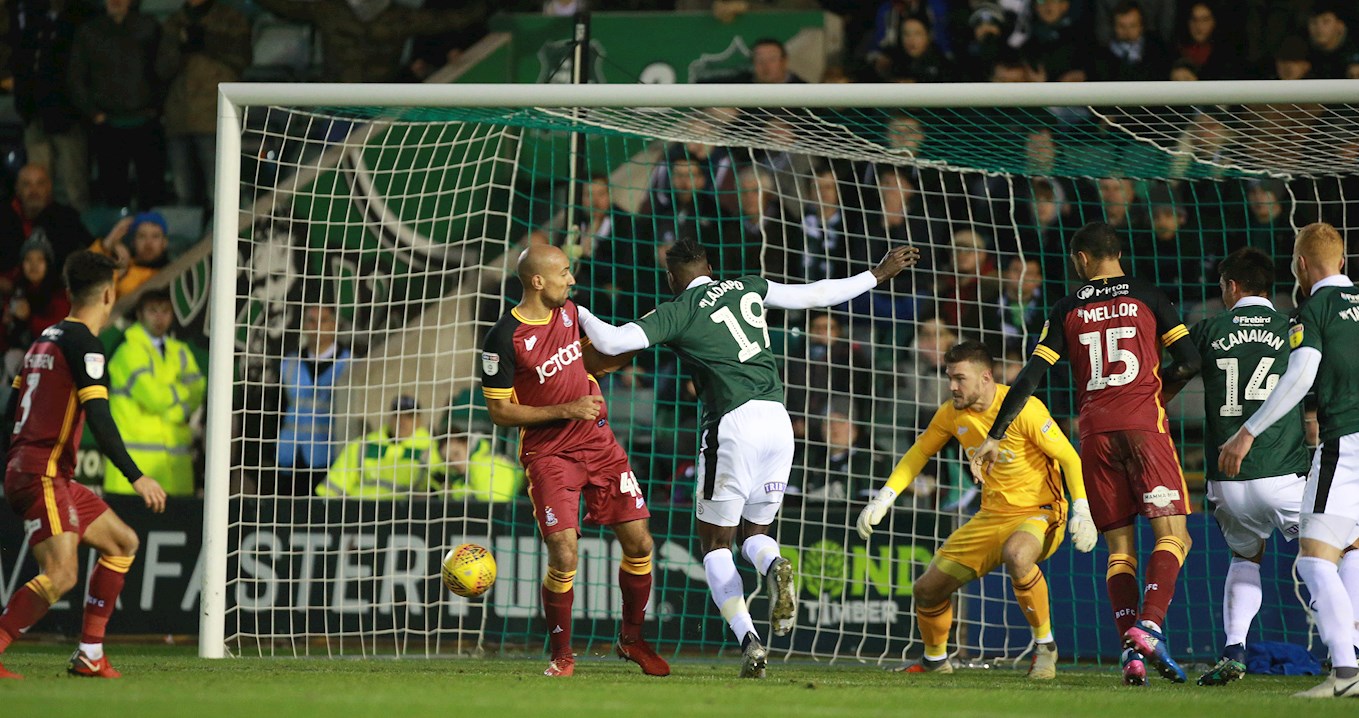 ARGYLE head to Yorkshire as a reinvigorated side, having slipped to only one defeat in what has so far been a fruitful calendar year.

Bradford, meanwhile, are one of the more unpredictable sides in Sky Bet League One, with streaky runs of form, good and bad, leaving them playing a nervy game of Snakes and Ladders with the relegation zone.

Valley Parade has been a relatively happy hunting ground for Argyle, and their most-recent win came there only a season ago when Jake Jervis netted for the Pilgrims from a Lionel Ainsworth cross.

On that November day, Derek Adams’ side entered the fixture bottom of Sky Bet League One, while Bradford were flying-high in third. Just a month later, though, the Bantams avenged that defeat by dumping Argyle out of the FA Cup in a 3-1 loss in Yorkshire, with Graham Carey netting the consolation.

Before that, you would have to go back to November 2012 for the last league trip to Bradford, where Gary Jones netted past Rene Gilmartin in the Argyle goal to defeat the Pilgrims 1-0 in Sky Bet League Two.

The season before that, Craig Sutherland’s one-and-only Argyle goal was cancelled out by James Hanson in the 86th minute for a 1-1 draw, with both sides scrapping for their place in the EFL.

On a side note, while the EFL officially recorded it as Craig Sutherland’s one-and-only Argyle goal, according to the man himself, his outstretched boot made no contact with Simon Walton’s drive across the goalmouth and thus he refused to claim it as his own. This quirk is compounded when, in hindsight, you become aware that it turned out to be the only goal he was ever credited with in English football.

Since Argyle played out a thrilling 3-3 draw with the Bantams in game-week 21 of the Sky Bet League One season, both sides have established results that place them in the top half of the form table.

Encouraging, of course, but having started these runs in 22nd and 24th respectively, it’s left both Argyle and Bradford still with work to do this campaign.

This challenge has been enhanced somewhat, in the case of our Yorkshire hosts, by a recent dip in fortunes. Having secured only five points in their last five Sky Bet League One matches (Fleetwood (H) 0-1, Wycombe (A) 0-0, Shrewsbury (H) 4-3, Burton (A) 1-1, Southend (H) 0-4), Bradford find themselves occupying second-bottom position as we approach the sharp end of the season, with only AFC Wimbledon below them.

Meanwhile, Argyle have maintained their position as one of the division’s form sides, hauling themselves up to the relatively dizzying altitude of 15th after Saturday’s Dockyard Derby draw with Portsmouth.

Despite their league struggles, Bradford have won five of their last eight Sky Bet League One games at Valley Parade, scoring 15 goals in the process. Argyle’s away record over the course of this campaign (played 16, 15 points) is better than only four sides at this level – one of these being the Bantams.

If Argyle’s mid-season away form report card read ‘requires improvement’, then Derek Adams’ side have certainly risen to the challenge. The Pilgrims have earned just under half of their season’s total away points in their last four trips (Peterborough 1-0, Wycombe 0-1, Southend 3-2, Burton 1-1), and head to Bradford averaging 2.13 points-per-game in their last eight fixtures, which is nearly a point-per-game (+0.97) better than their season’s average of 1.16.

On the same scale, Bradford are averaging 1.38 points-per-game, which is a marginal improvement of their season’s average of exactly 1.00. While that round number might be aesthetically pleasing, it won’t be enough to keep the Bantams in League One.

Unsurprisingly, given the sides’ six-goal thriller at Home Park in December, both Argyle and Bradford have lower-third defensive records at this level. Between the clubs, they have conceded 105 goals over their combined 64 games (Bradford 52, Argyle 53), while their attacking potency has been better than their league position on both counts, with Argyle the 12th highest scoring team in League One (40), and Bradford 17th (36).

It's going to be another fascinating day for Argyle in Sky Bet League One.