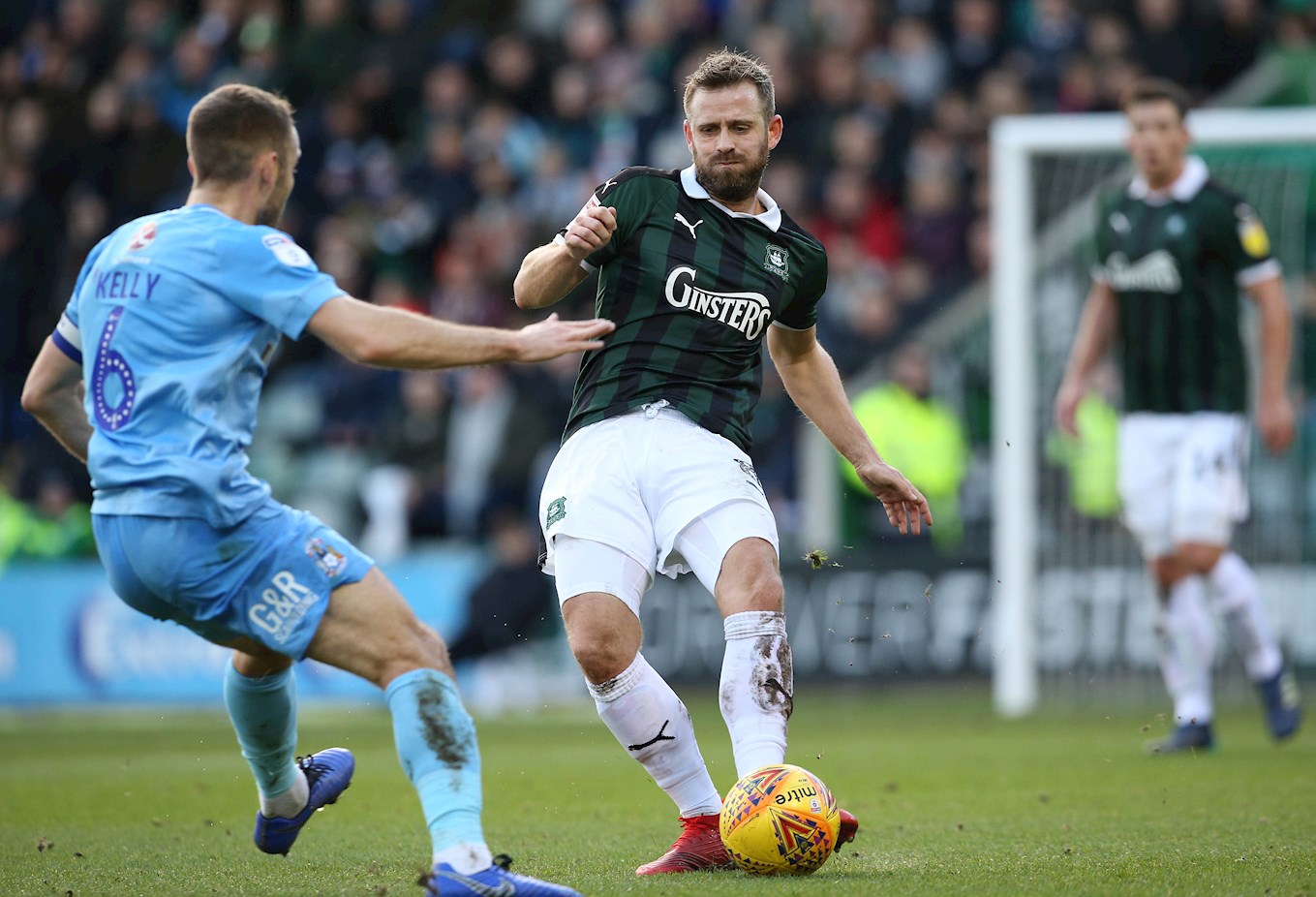 The Portuguese playmaker’s strikes took his goalscoring run to an incredible six in four games, handing Argyle their third-successive win and lifting them to within touching distance of the mid-table pack.

The win was even sweeter for Argyle, as they recovered from going behind to a Conor Chaplin goal ten minutes after the interval to secure three valuable points in Sky Bet League One.

Argyle boss Derek Adams kept faith with the same starting eleven for the third successive game, while the substitutes’ bench also remained unchanged from last week’s dominant display at Southend. Lameiras, with four strikes in his last three games, lined up looking to continue his run of goals against his former club.

Meanwhile, the visitors made three changes from the side that was held 1-1 at home to AFC Wimbledon. Jack Grimmer and Brandon Mason replaced Dujon Sterling and Sam McCallum in the first 11. A last-minute enforced change also saw Tom Davies come in for Jordan Willis, who pulled up during the warm-up.

Notable Sky Blues included captain Liam Kelly, infamous among the Green Army for a ball-boy related incident which earned him a six-game ban while playing for Leyton Orient, and forward Chaplin, formerly of Portsmouth.

Coventry started brightly, forcing Argyle stopper Kyle Letheren into a couple of early saves. Bright Enobakhare latched on to Gary Sawyer’s miscued header and danced through an Argyle backline doing its utmost not to bring him down.

Enobakhare struck low, but Letheren got down smartly to save his skipper’s blushes. Almost immediately afterwards, the Welshman had to stand firm once again to deny Jordy Hiwula’s goalbound effort.

Next to rise to the challenge was Ryan Edwards, who reminded the Green Army, as if he needed to, of the strength of his character when he unflinchingly met Hiwula’s powerful volley with his forehead.

Argyle responded with some neat attacking play – the forward-thinking trio of Graham Carey, Lameiras and Antoni Sarcevic combining to pin Coventry back inside their own area, before David Fox’s 20-yard effort was deflected wide – although referee Trevor Kettle opted to give a goal-kick, much to the home crowd’s displeasure.

Argyle, exhibiting increasing resilience in recent weeks, worked hard to wrestle control over their spirited opponents. On 27 minutes, Carey attempted one of his trademark specials, cutting in from the right flank, dropping the shoulder and lifting a curler just over Lee Burge’s crossbar. Moments later, Yann Songo’o, keen to make his mark, dispossessed Enobakhare with his own brand of crunching tackle.

The breathlessness of the first period showed no signs of letting up, and the Sky Blues responded through the lively Hiwula, who rattled through a full complement of stepovers just inside the box before firing straight at Letheren. Sarcevic, for the Greens, and Mason, for the visitors, both went into the book as the battle for dominance continued.

With half-time looming, Argyle forced an opening and Ladapo, who had been tightly-marked all game, found himself a pocket of space out on the left and slid a perfectly-weighted ball to the feet of the onrushing Lameiras. The Portuguese, opting for placement over power, lifted his effort agonisingly over the bar in front of a mightily-relieved away contingent.

Half-time arrived, but not before Argyle were nearly gifted the opener. Burge, attempting to control a less-than-helpful back-pass from full-back Grimmer, nearly pivoted the ball into his own net, forcing him to scramble to his goal-line and clunk it out of play for a throw-in.

The second-half began with a flurry of Argyle attacks. The best of these was created by Ladapo in a move of entirely his own making, the front-man managed to inherit the ball 30 yards from goal. He turned, broke into the box and closed in on goal, forcing Burge into a brave smother at his feet.

However, it was Coventry who grabbed a controversial opener on 56 minutes. Ash Smith-Brown was harshly penalised, and booked, for a sliding challenge in which he took ball, then man. From the resultant free-kick, Chaplin curled a left-footed effort around the wall into the top corner, despite the best efforts of Letheren and the crossbar.

A few minutes later, in a moment that felt no more than the Greens deserved for their efforts, they were level. Argyle rushed forward in numbers, and although the first-phase of their attack broke down, they won the ball back. From the resultant melee, Lameiras volleyed the ball across Burge and into the far corner against his former employers, as Ladapo had done the previous week.

He was not done there, a piece of futsal control in his own half set Lameiras off into enemy territory. A superbly laid ball to Carey on the edge of the area begged to be hit, but the Irishman corked his effort wide.

What happened next nearly lifted the roof off Home Park. Coventry, unable to clear their lines from an Argyle corner, were again punished by their former man. Showing incredible desire to reach the ball on the edge of the area before his marker, Lameiras drove into the box with the confidence of a man in the form of his life, and slotted Argyle into the lead at the Devonport End.

At the other end of the pitch, Adams brought on Scott Wootton on for Niall Canavan with ten minutes to go.

Chaplin, keen not to see his free-kick scored in vein, led the best of Coventry’s response as the game drew to a nail-biting close, forcing super stops from Kyle, as well as brave blocks from Edwards and Sawyer.

In stoppage time, with his damage already done, Lameiras made way for Joe Riley, lapping up a richly-deserved standing ovation from the home crowd.