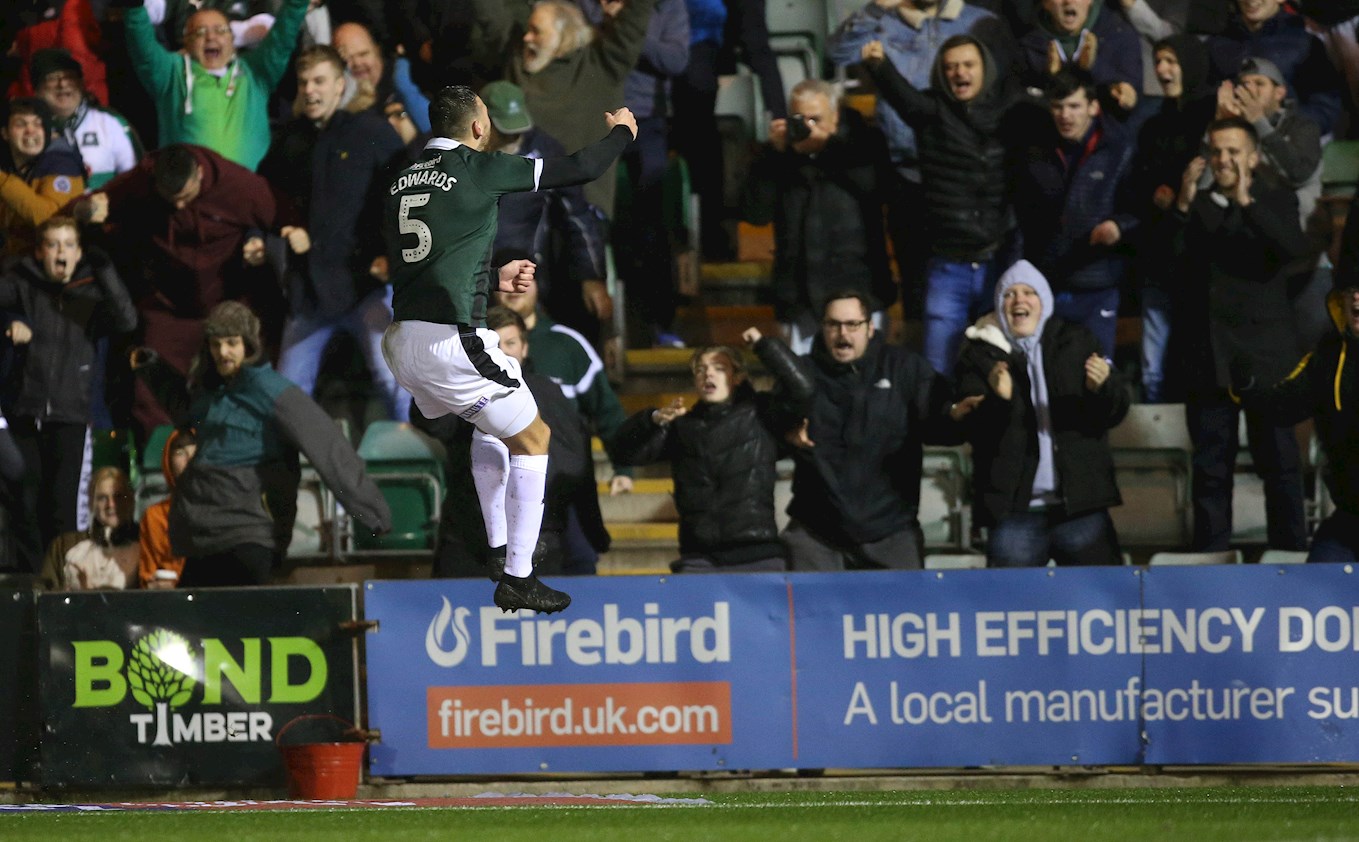 WALSALL’S supporters must be heartily sick of the sight of Argyle’s centre-backs after early second-half goals from the twin pillars of the Pilgrims’ defence lifted the Greens well clear of the Sky Bet League One relegation places.

Ryan Edwards, who had headed Argyle’s opening goal of this rapidly improving campaign at Walsall in late summer, repeated the medicine on a wintry Tuesday evening at Home Park.

Soon afterwards, Niall Canavan nodded home his fourth goal in games against the Saddlers, more than 20% of his career tally, to put the Pilgrims well on their way to a fourth successive win.

Andy Cook kept the Pilgrims keen with his fourth goal in four days eight minutes from the end but the Pilgrims were never going to be deflected from claiming another three–point haul.

Argyle manager Derek Adams had selected the same 11 that had won the Pilgrims' previous three matches, home victories against Oxford United (3-0) and Coventry City (2-1) sandwiching a 3-2 triumph at Southend United.

Ruben Lameiras, who had claimed both goals in the victory over Coventry three days earlier, went into the match aiming to become the first Pilgrim since Tommy Tynan in 1988 to score in five successive league games.

Walsall were also unchanged following their 3-0 win at Gillingham, in which Cook scored a hat-trick. Former Pilgrim Scott Laird, a recent loan signing from Forest Green Rovers, started on the substitutes' bench.

The Greens started with a purpose in freezing conditions which soon turned into driving rain laced with sleet, but Walsall created the first opening from Luke Leahy’s free-kick on the right.

A goal looked odds on when Josh Gordon rose to meet the sweet delivery but goalkeeper Kyle Letheren, a brick wall against Coventry, added to his repertoire of unorthodox saves to repel the ball with an instinctive swat.

Argyle best supply line was Carey. From the left he found Yann Songo’o at the far post for a header which went over; a little later, from the right, only an alert Saddlers’ defender prevented Freddie Ladapo from possibly profiting at the near upright.

Clear-cut chances were, though, few and far between, as a congested midfield area held sway. Patience was definitely the watchword.

Unlike their midland neighbours Coventry, Walsall majored on dogged determination in a solid centre, and the close proximity of so many players gave the game a physical air which was aided by the skiddy surface.

The visitors were not without their adventurous moments and might have gone into the interval a goal to the good had not centre-back Jon Guthrie skied his shot as another Leah delivery from the right bookended the first 45 minutes.

With Home Park seeking something to warm them, Ash Smith-Brown led the second-half rally, pushing down the right and playing a one-two with Lamerias before a low cross that fell between the two stools of Antoni Sarcevic and Carey.

The deadlock-breaker was not long in coming. With dead-ball practitioners like Carey and David Fox on the park, Walsall's aggressive tendency to concede free-kicks always looked a risk.

So it proved when Carey slung over the perfect far-post delivery from the left for Edwards to head in at the far post.

The goal brought Walsall out of their defensive shell and, three times in the wake of Edwards’ header, they stretched the Pilgrims last line.

An incursion by former England international Matt Jarvis was thwarted only by a late Plymouth boot knocking the ball over the crossbar, before the corner was pumped towards goal, catching on the wind, and obliging Letheren to claw the ball away.

Jarvis’s flag-kick made its way to the far post, where Cameron Norman was lurking to send a tame header on to the post.

Argyle saw out the sudden flare-up and responded in the perfect fashion to their opponents’ resurgence and rough-housing by doubling their margin.

Another free-kick, this time on the right, found a diving Canavan, who had lost his man, to head home, his post-goal slide taking him into the arms of a jubilant Devonport end.

Argyle were so on top that they were able to withdraw Sarcevic – a yellow card away from a two-game suspension – in favour of Ryan Taylor.

Their supremacy was given pause when Cook was allowed to squeeze home a shot at the near post but that was really the only defensive blip in an another otherwise impressive showing from the back line.