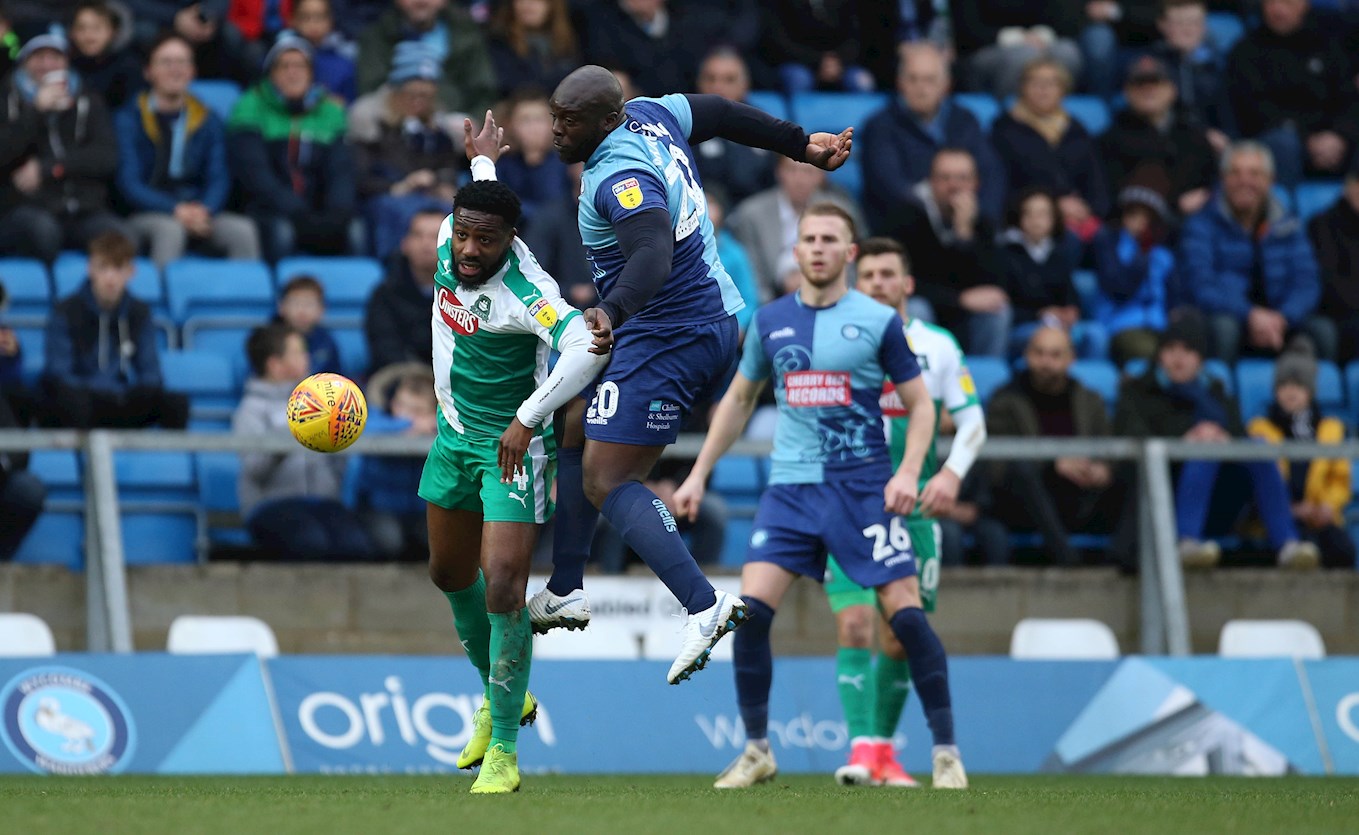 A YANN Songo’o own-goal condemned Argyle to a narrow 1-0 Sky Bet League One defeat against Wycombe Wanderers at Adams Park.

The solitary decisive goal, which came from a corner on the 24th minute, handed Argyle their first defeat in 2019, ending a five-game unbeaten run in the process.

Argyle manager Derek Adams kept faith in the starting eleven that had won their last four games. In an interesting statistical quirk, the Greens arrived for their fixture at Adams Park outside of the relegation zone for the first time since their home tie against the same opposition, on Tuesday, August 21.

Meanwhile, Wycombe, coming off back-to-back victories, made two changes, with Matt Bloomfield and Adebayo Akinfenwa replacing Scott Kashket and Alex Samuel. The Chairboys’ side also included former Pilgrim Paris Cowan-Hall, while new signing, Luke Bolton, on loan from Manchester City, had to make do with a spot on the bench.

Akinfenwa, who had two goals and three assists in his last five appearances against the Pilgrims, was, unsurprisingly, the focal point of Wycombe’s attacks, and Argyle had to rely on last-ditch stops from Niall Canavan and Letheren to deny the hosts’ big man early on in Buckinghamshire.

Space out wide on a narrow Adams Park pitch was at a premium, and Argyle had to adapt away from the play that has epitomised their good run of late, with direct balls into the channels for top-scorer Freddie Ladapo to chase the main feature of their play in the opening stages.

The Greens grappled to get a foothold in the match against a physical home side, and their first opportunity came from a Graham Carey set-piece, not too dissimilar in location to the first of his brace of assists against Walsall on the previous Tuesday. This time, though, a green shirt failed to get on the end of it.

Wycombe responded a few minutes later, their attack once again direct in nature. Letheren punched the ball clear from a looping ball into the box, and Nick Freeman met the rebound, cracking a left-footed half-volley just wide of the far post.

Moments afterwards, the hosts were in front. A Joe Jacobson in-swinging corner looked destined to find Akinfenwa six yards out. Songo’o, desperate to divert the ball away from the striker, inadvertently turned it past Letheren from close range to hand the hosts the lead.

Wycombe, buoyed by their opener, continued to press, and only a brave block from David Fox denied the hosts a shot at doubling their advantage. A fired-up Foxy earned himself a booking on 36 minutes for illegally halting a Wycombe counter.

As the game became a little more stretched, Cowan-Hall had the opportunity to net against his former club. Fortunately, Letheren made a miraculous one-on-one save to deny the former Pilgrim, despite slipping just before the winger took aim.

Argyle responded when Songo’o, who had endured quite a first-half, won a free-kick 25-yards from goal, centrally placed. Carey lent back a little too much and curled his effort a few feet over Allsop’s bar, which had summed up Argyle’s response since the opener. A lot of effort, but not quite the final moment of quality to bring themselves back into the game.

As half-time arrived, that moment seemed to have appeared, as Lameiras came within a lick of paint of equalising. After good play between Sarcevic and Carey, who was fouled, Lameiras curled a left-footed effort over a rooted Allsop and on to the crossbar. Jacobson was booked for the late challenge on Carey in the build-up, which felt like little consolation for a great move that came agonisingly close.

Argyle, now attacking the goal in front of a vocal Green Army, began the second-half as they finished the first, and only a last-ditch challenge from El-Abd denied Ladapo getting in behind after a well-measured pass by Lameiras.

Wycombe responded with a long-ball for Akinfenwa, who put enough pressure on Edwards to generate an opportunity inside the area. Letheren was alert to the danger and closed the angle down to get firm hands on the attempted lob.

As the second-half matured, Argyle gradually gained control of the midfield territory, and Wycombe responded by soaking up the pressure and breaking play up. Carey and Lameiras switched flanks as the Greens attempted to generate the opportunity to convert their advanced position into efforts on goal. Ryan Taylor replaced Fox on 68 minutes to force the issue a little further. Wycombe responded by bringing Manchester City loanee Bolton on for Bloomfield.

The game continued to evolve at a frenetic rate, with Akinfenwa once again halted by Letheren before Carey whipped one wide at the other end. The Wycombe forward, satisfied with his afternoon’s work, made way for Samuel shortly after with a quarter of an hour left to play.

Referee Scott Oldham had words with Songo’o shortly after, who expressed his frustration at perceived time-wasting from the hosts, who seemed to have trouble getting the ball under enough control to restart play in a timely manner.

Mists of rain began to fall in Buckinghamshire with 10 minutes to go, which didn’t do anything to enhance the quality of play in what was already a stop-start game. Allsop was the next Wycombe player to need lengthy treatment after Ladapo attempted to challenge for a 50/50 in the box. Moments later, Ladapo flashed an attack across the Chairboys’ goal, but a green shirt could not quite convert. Derek Adams’ final roll of the dice was to bring Luke Jephcott on for Lameiras.

A Carey cross was next to flash across the greasy surface, but an outstretched toe from a Wycombe defender diverted the ball away from the onrushing Sarcevic. From the resultant counter, Edwards had no choice but to stop the attack and earn a booking in the process as Argyle were fully-committed to finding an equaliser.

Seven minutes were added on by referee Scott Oldham as the Greens’ desperate push continued in the deepening rain. Argyle pushed hard, looping free-kicks and corners into Allsop’s area as the game drew to an end, but they couldn’t carve out a clear opening to snatch themselves a point.