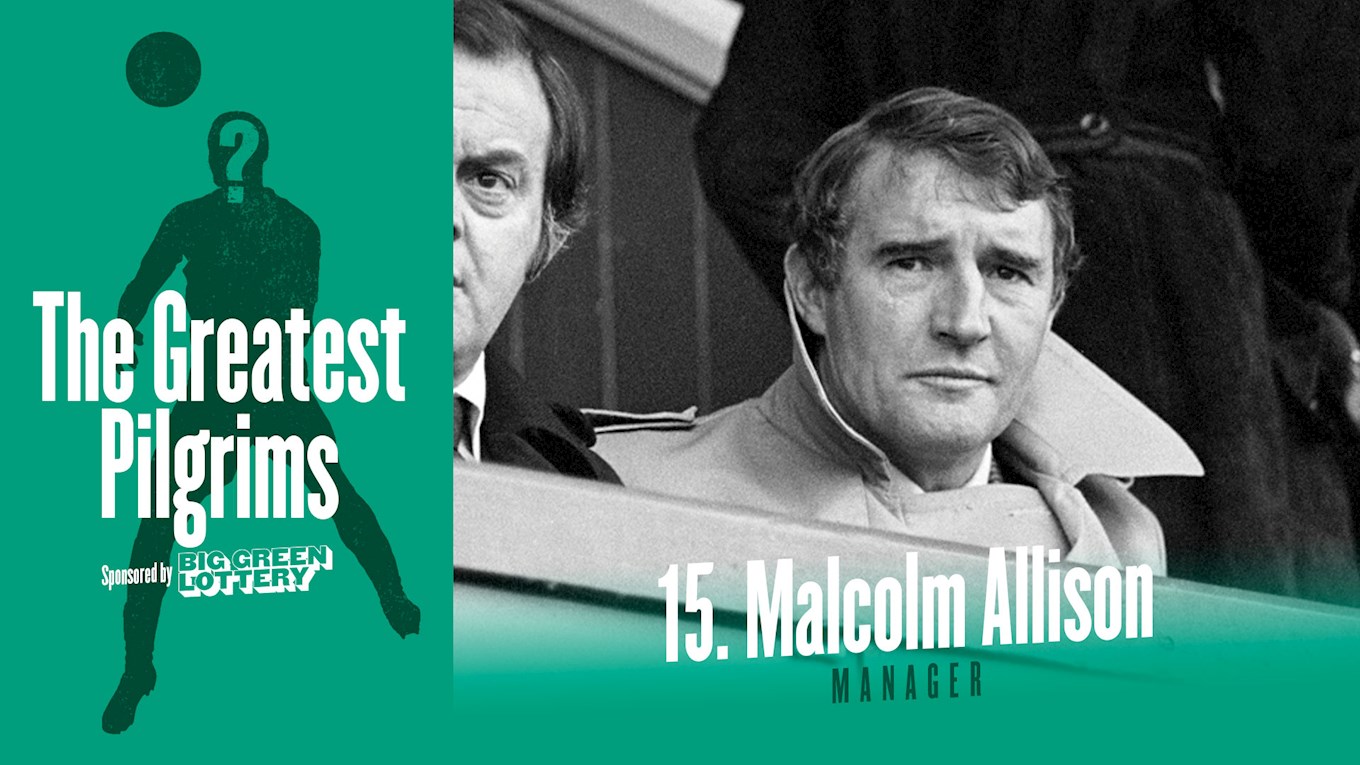 A manager at Home Park on two occasions in spells separated by 13 years, Malcolm Allison was a massive character in the game of football.

As a player, he made over 200 appearances for West Ham before he was forced into retirement after suffering serious illness. Allison moved seamlessly into coaching with the Hammers, introducing revolutionary methods that ignored the old fashioned training that was purely fitness-focussed.

He took the manager’s job at Bath City and then a major promotion to take over at Manchester City. Malcolm arrived at Home Park in 1964, bringing a fresh brand of tactics and ideas. He was a man ahead of his time but results were inconsistent and he left Argyle a year later.

He later worked as assistant boss back at Manchester City, managed Crystal Palace and Galatasary in Turkey. Malcolm came back to Home Park in March 1978 and immediately saved us from certain relegation, but left again after Manchester City came calling for a third time. The great Malcolm Allison sadly left us in 2010 at the age of 83. 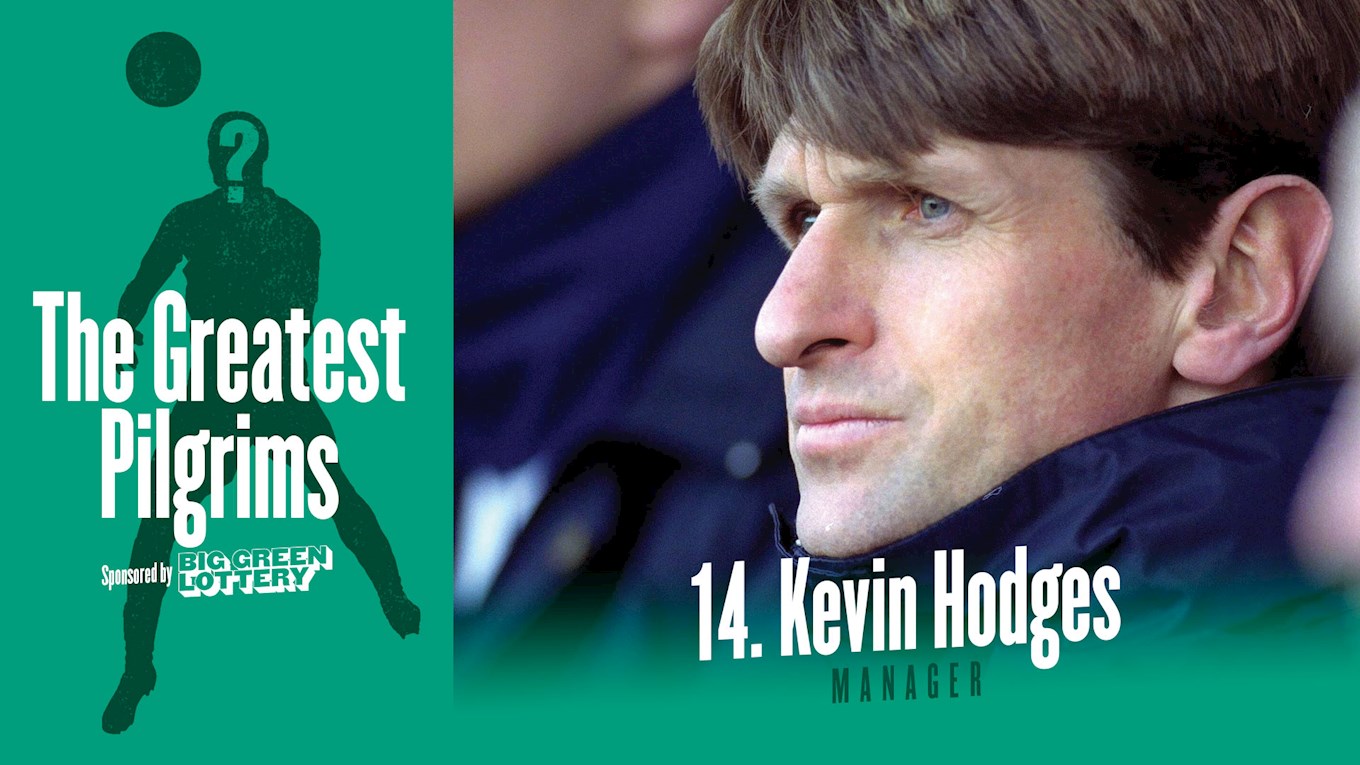 The record-appearance holder at Argyle as a player, Kevin Hodges will always be a Pilgrim legend and he also enjoyed success as a manager.

After reaching an astonishing 620 games for Argyle, Hodges finished his playing career at Torquay and then moved into coaching and management with the Gulls, transforming our Devon neighbours with some astute signings and a brand of attacking football.

Torquay missed out on automatic promotion on the final day of the 1997-98 season and then lost out in the play-offs, but Hodges had caught the attention of his beloved Argyle and replaced Mick Jones as boss in 1998.

He made a solid start at Home Park and steered Argyle to the promotion places in the Third Division before inconsistent results saw us slip to mid-table. Behind the scenes, however, Hodges was battling with a seriously restricted budget and a squad that needed revamping.

Despite the constraints, he pulled off another mid-table finish before leaving at the start of the 2000-01 season. He has been in charge of the Academy at Home Park for the past decade and a Pilgrim legend. 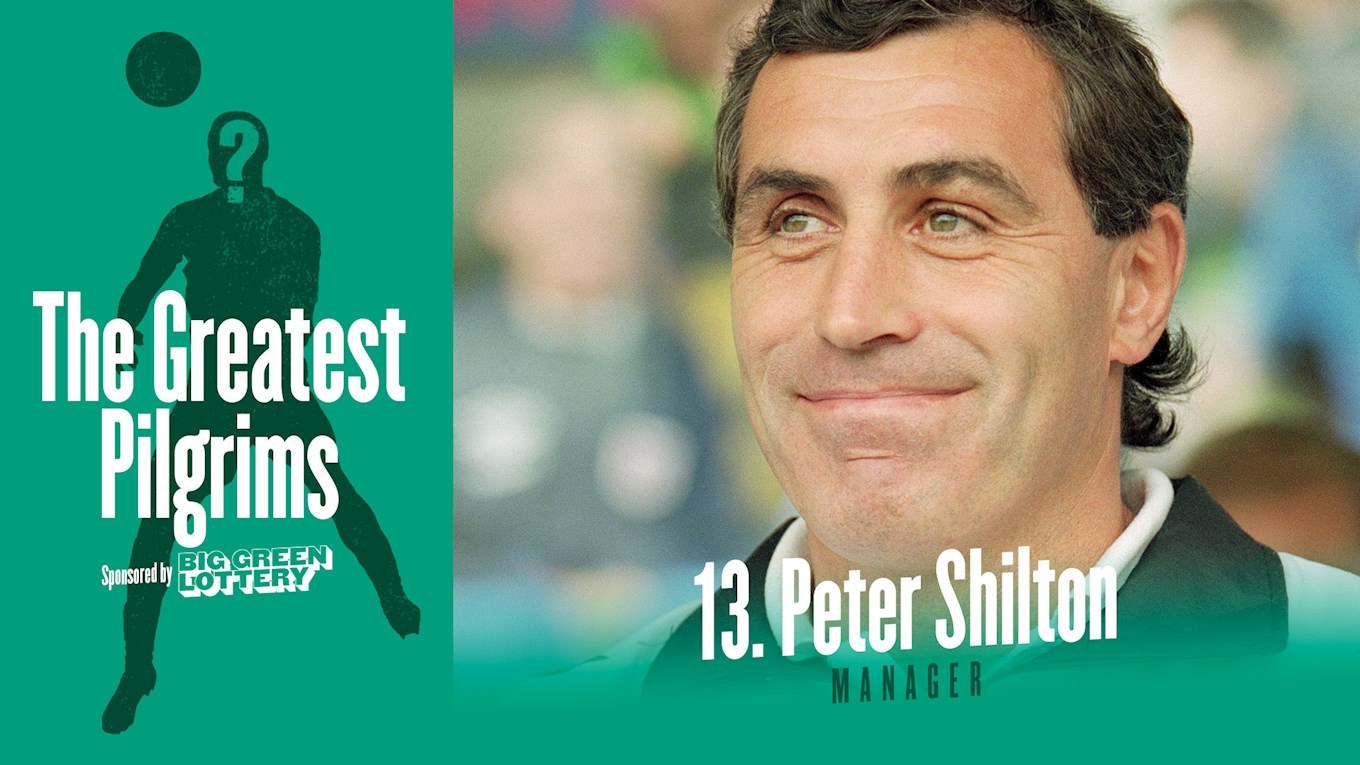 The legendary goalkeeper Peter Shilton enjoyed his only stint as a manager with Argyle and did a fine job before results began to slip at the end of his tenure.

Shilton was the finest goalkeeper of his generation and became England’s most capped player with an incredible 125 international appearances for his country.

Having reached 961 league appearances, Shilton joined Argyle in March 1992 with the club languishing at the bottom of the table. While he was unable to avoid relegation, Shilton began to have an impact in the following season, thrilling the Green Army with some fabulous flowing football.

Results did not always match the entertainment and Shilton’s relationship with the Argyle Board became increasingly strained. He left the club in January 1995 but Shilton’s time at Home Park was certainly never dull. 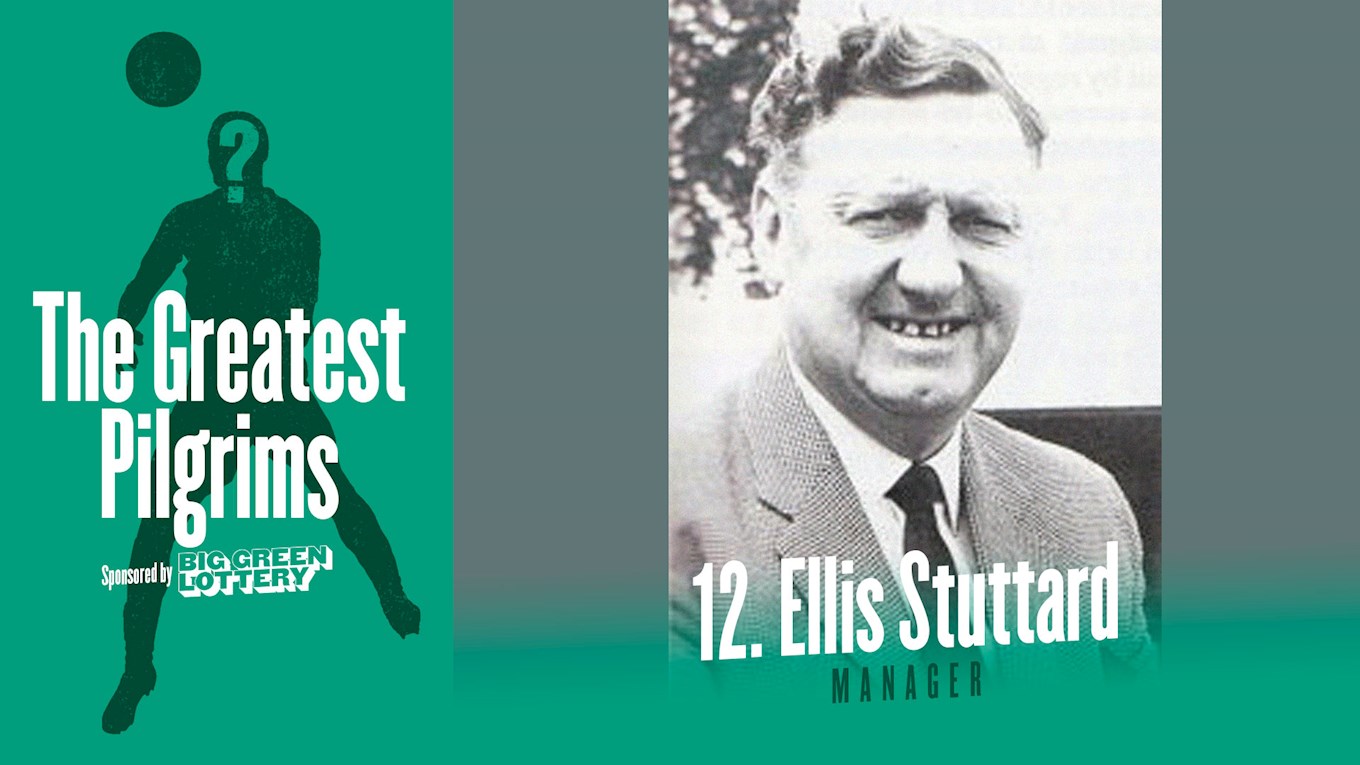 Ellis Stuttard is another in the list of Argyle managers who made an impact at the club over two different spells and a man who could inspire his team to sensational runs of form.

As a player, Stuttard’s career was severely interrupted by the Second World War. He made one appearance for Argyle before the start of the War and then a further 28 games after the hostilities, moving to Torquay in 1947.

He then moved into coaching and first became Argyle boss in 1961. In his first full season as manager, he cultivated a winning culture at the club and steered us to the brink of the top flight before slipping to fifth at the end of the campaign.

After finishing mid-table in the following season, Stuttard stepped down in September 1963. He had a season as Exeter boss but returned to Home Park in 1970. The second spell was solid but unspectacular, and Stuttard moved into the role of chief scout in 1972. He sadly died in 1982 at the age of 64. 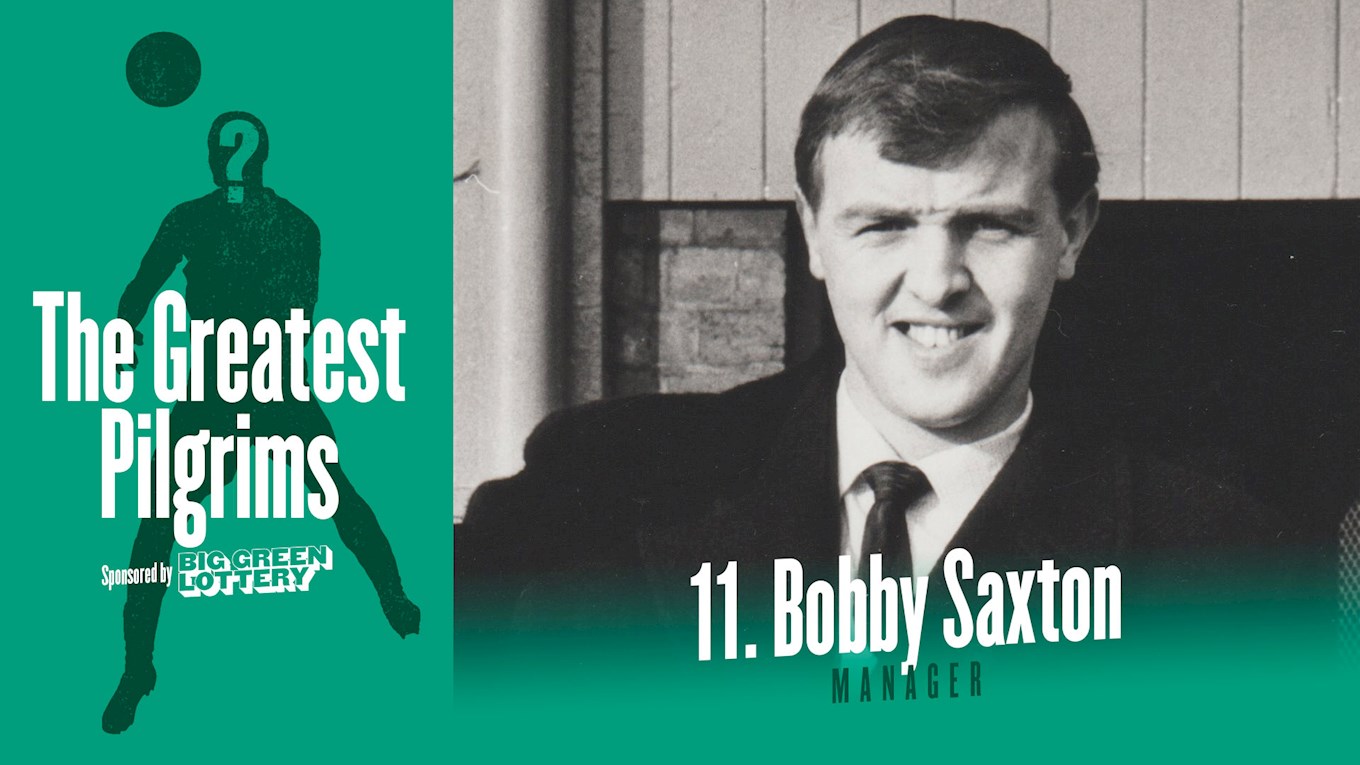 Bobby Saxton made a huge impact at Home Park, as a player and manager, signing some Argyle greats in his two years as the boss.

Saxton was a tough defender who learned his trade at Derby County before signing for the Pilgrims in 1965. Over the next seven years, he was a hero to the Green Army with his uncompromising and fearless approach.

His playing career ended at Exeter and he moved into management with the Grecians before being appointed Argyle manager in 1979. He steadied a struggling side and guided us back up to fifteenth in the 1979-80 campaign.

Saxton brought in legendary goalkeeper Geoff Crudgington and the goals of David Kemp, finishing seventh in his second season. Something very exciting was happening under Saxton but Blackburn swept in to poach the boss. He spent six years with Rovers and continued to work in coaching for many years.