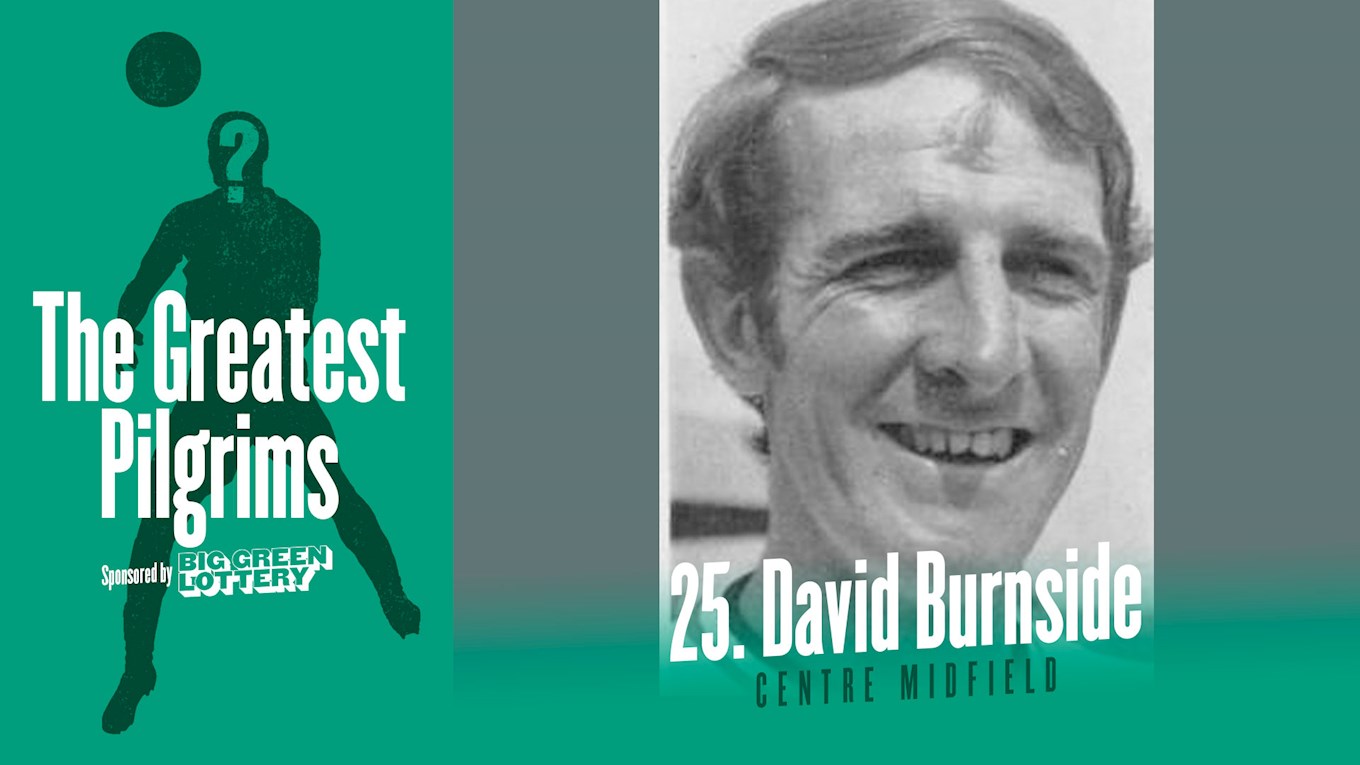 Skill, creativity and guile were the trademarks of David Burnside, a pure natural talent who graced Home Park for three years from 1968 to 1971.

An England youth international, Burnside began his career at West Bromwich Albion and was famed for his incredible ball-juggling skills. After five years at the Hawthorns, he spent much of the 1960s with spells at Southampton, Crystal Palace and Wolverhampton Wanderers.

Burnside was already a highly experienced midfield playmaker when he was signed by Argyle boss Billy Bingham and played in a role possibly before his time, operating in that dangerous hole between midfield and attack.

He was also capable of playing as the main centre-forward and won Player of the Season in his first full campaign at Home Park. Burnside was a wonderfully gifted footballer and a great shame when he moved on to Bristol City. He also played for Colchester and Bath City, and a brief stint as manager of the England Under-20. This great Pilgrim sadly passed away in 2009 at the age of 69. 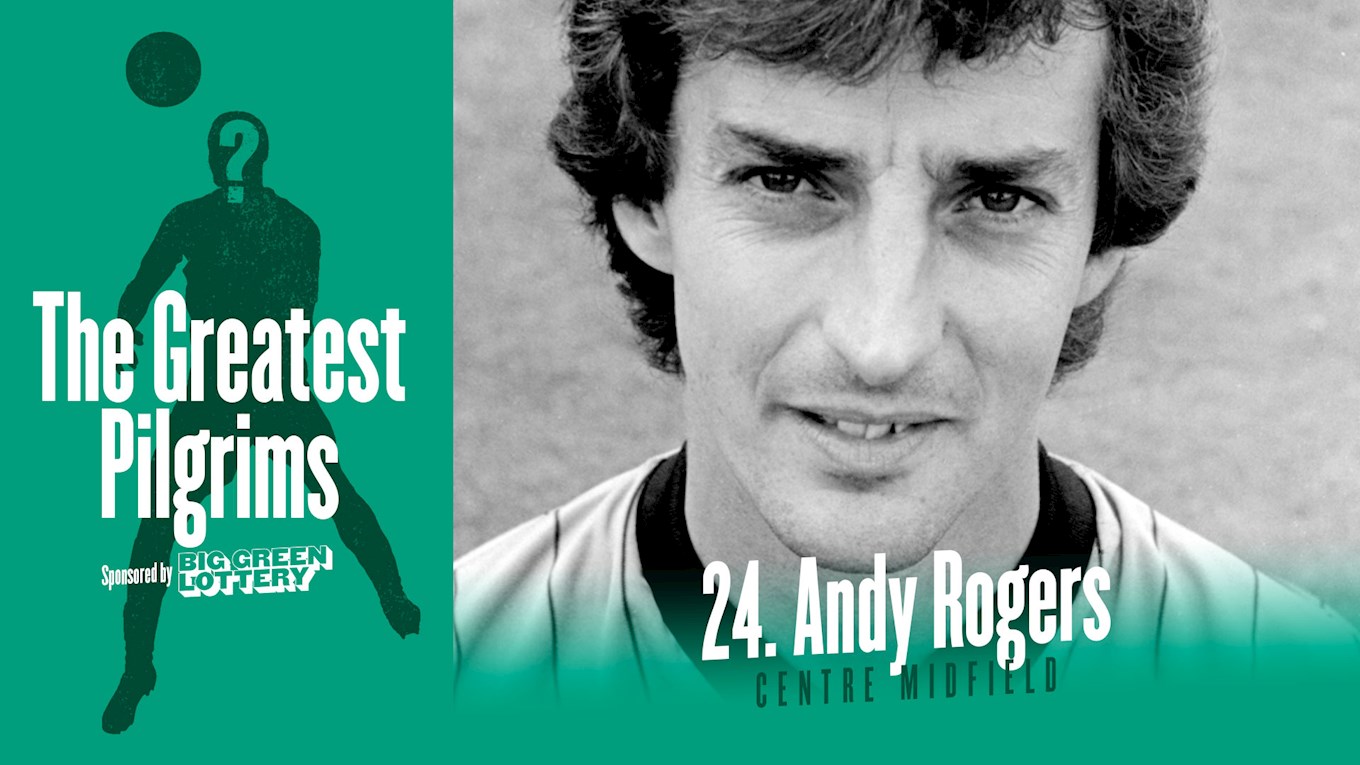 He will forever be remembered by the Green Army as the scorer of one of the iconic, and slightly bizarre, goals in Argyle history but Andy Rogers was a lot more than just one moment.

Beginning his career at Peterborough United, opportunities were fairly limited with the Posh and he actually explored a change of profession in teaching. Back in football, Rogers moved to Southampton for a brief spell before switching to Home Park in 1981.

He was a solid and consistent performer in the middle of the park, reaching 195 appearances for the Pilgrims and scoring 19 goals, the most famous of which came direct from a corner to win the 1984 FA Cup quarter-final at Derby County.

Rogers moved on to Reading in 1985 and then a further two seasons with Sheffield United before moving into the non-league game. 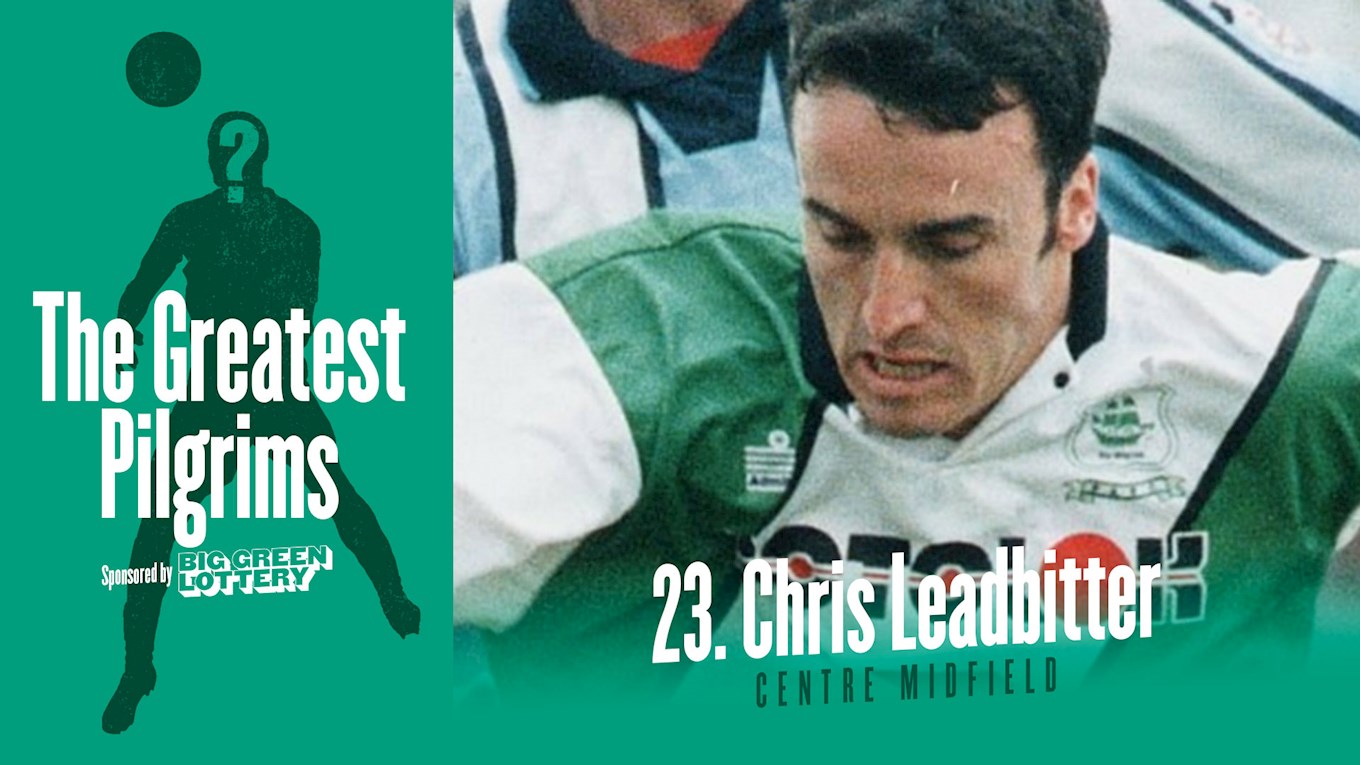 Over two spells at Home Park, Chris Leadbitter established his place in Pilgrim history with his excellent combative performances in the Argyle engine room.

Leadbitter spent his early career at Grimsby and Hereford before a prolonged stint with John Beck’s famously industrial Cambridge side saw him become an established lower-league midfielder.

He then spent two years at Bournemouth before moving to Home Park in 1995. Leadbitter slotted seamlessly into the Argyle side and was a key member of the team that won promotion in 1996.

It was, therefore, something of a surprise when Leadbitter lost his place in the side and ended up at Torquay, where he also made a big impression. Argyle realised the previous error and brought him back to Home Park for a further two seasons in 1999.

A fine player in the late 1990s, Leadbitter later returned to his native north-east and played in the non-league game for the final few years of his career. 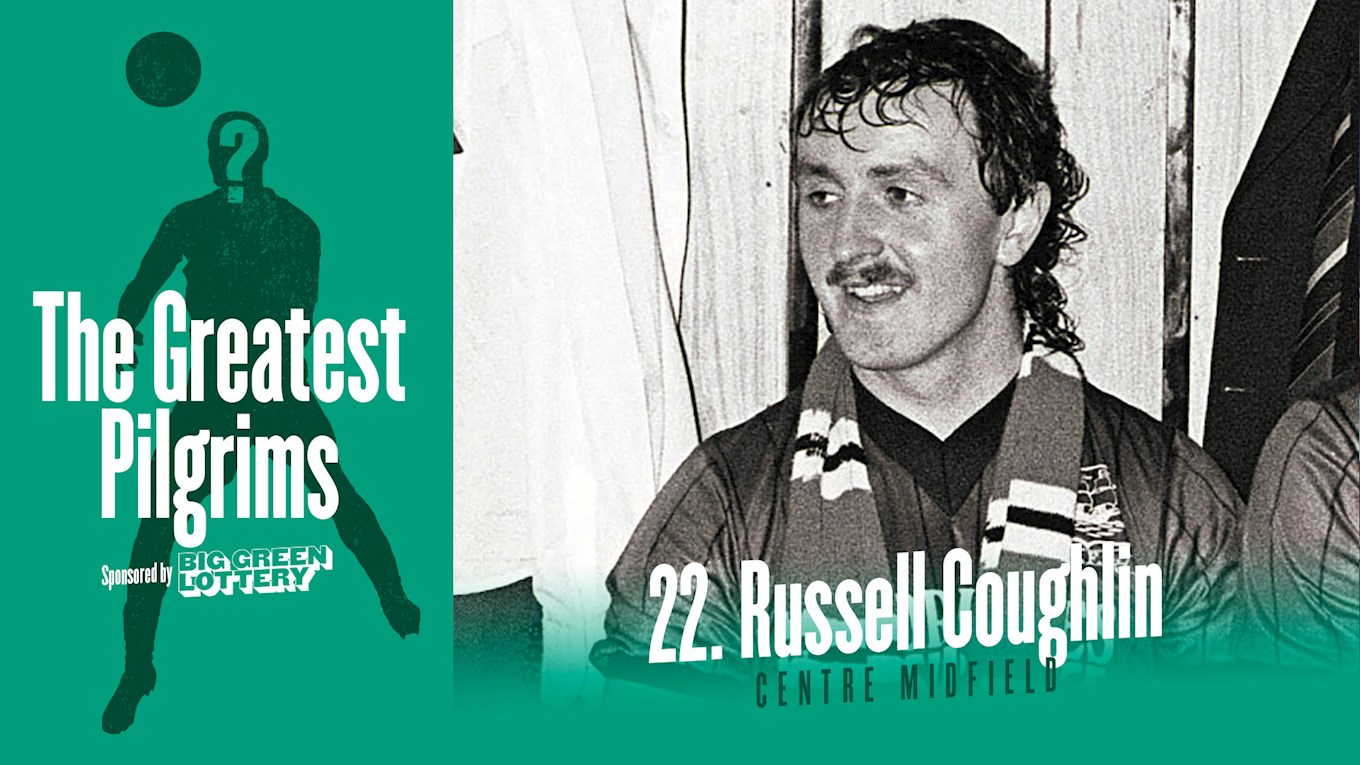 Russell Coughlin possessed the wonderful midfield combination of quality on the ball and tough nature that made him so difficult to play against.

Coughlin was a junior at Manchester City but moved on to Blackburn Rovers for first-team opportunities, later returning to his hometown club of Carlisle. After four solid years with the Cumbrians, he moved to Home Park in 1984.

It was the perfect fit for Argyle, as Coughlin controlled many games from the middle of the park. He was fiercely competitive and also had that vital component of being able to score goals from midfield.

He played a key role in helping us win promotion in 1986 and had secured his place in Pilgrim history before moving to Blackpool in 1987. He also played for Swansea and returned to Devon with Exeter and Torquay. This great Pilgrim sadly left us in 2016 at the age of just 56. 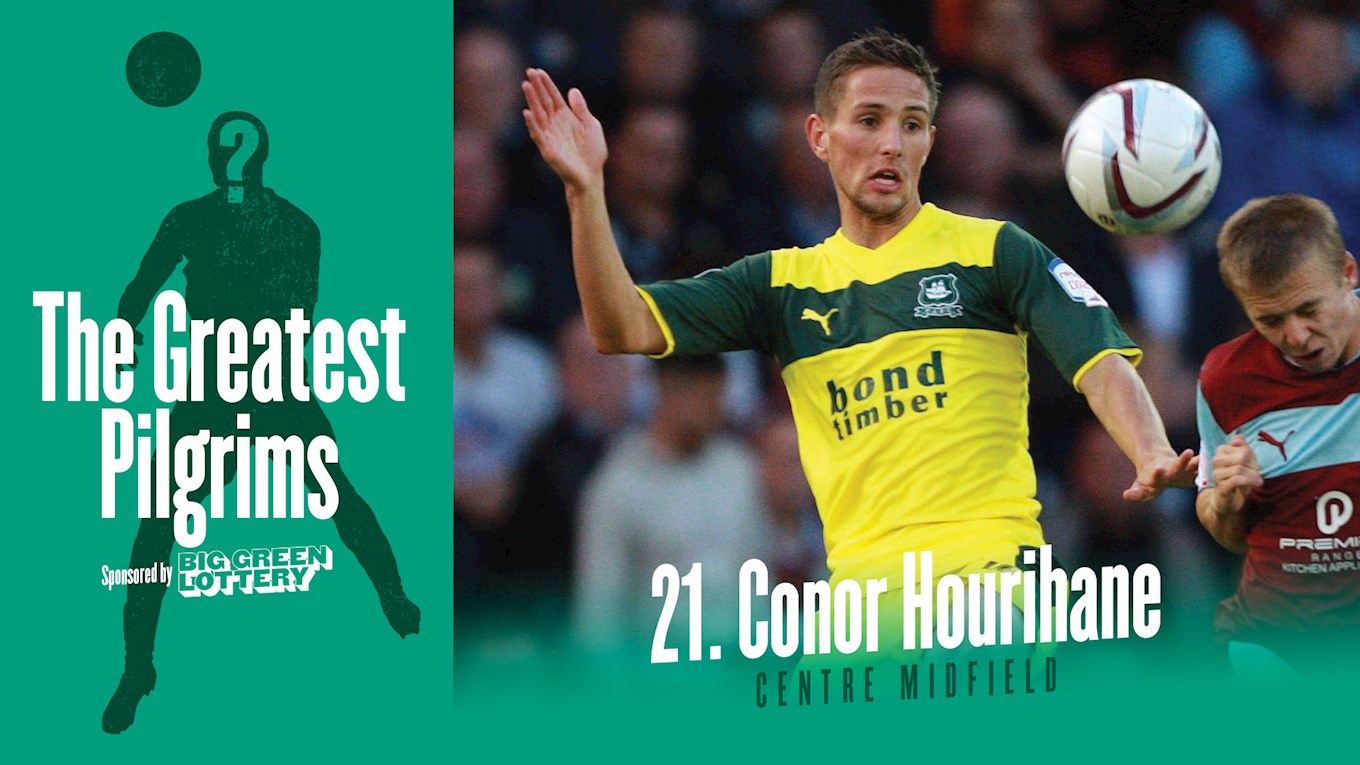 A genuine wand of a left-foot, Conor Hourihane will become a Premier League footballer in the 2019-20 season with Aston Villa and his road to the top began at Home Park.

The Republic of Ireland international had failed to make an impact with Sunderland and Ipswich when he was signed by Argyle in 2011. He settled into the Pilgrim midfield during a time of financial crisis and played a massive role in helping us avoid relegation.

Horuihane was growing into a fine footballer and was rewarded with the captain’s armband. A move to a more attacking role in midfield proved a masterstroke, as his wonderful ball-striking ability saw the Irishman score some fabulous goals for Argyle.

He had become one of the most sought-after midfielders in lower league football and Barnsley paid £250,000 for his services in 2014. The upward spiral continued with the Tykes and Hourihane then moved to Aston Villa, helping them reach the Promised Land of the Premier in the spring of 2019.