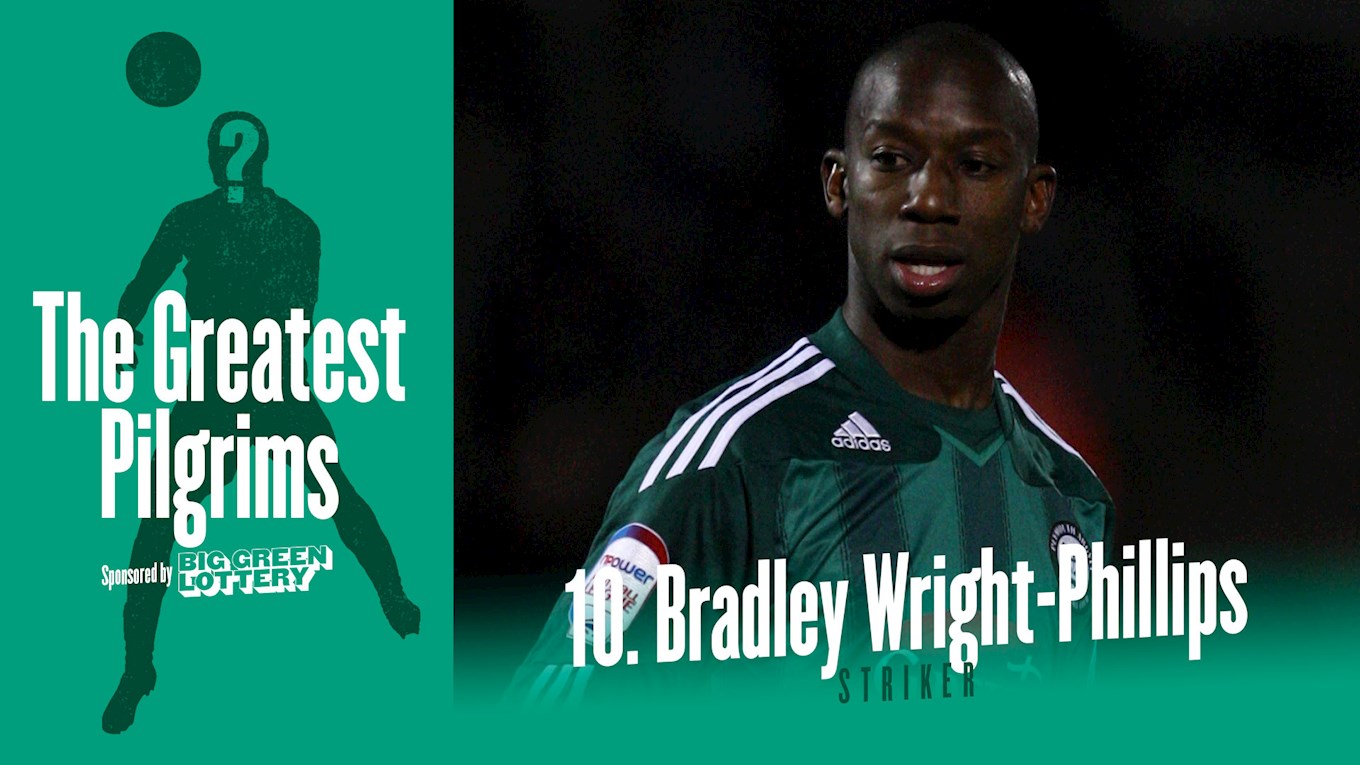 He was only at Home Park for 18 months and much of that period was interrupted by injury, but a sparkling run of goalscoring form etched the name of Bradley Wright-Phillips into Pilgrim history.

The son of England international striker Ian Wright and brother to another international in Shaun Wright-Phillips, there was plenty of expectation on Bradley’s shoulders as he came through the ranks at Manchester City.

A move to Southampton in 2006 gave him slightly more first-team opportunities but it was when he joined Argyle in 2009 that BWP found some fine scoring form. After overcoming injury in the early part of his Pilgrim career, Bradley caught fire in the first half of the 2010-11 campaign, scoring 13 goals in 17 games.

He was an outstanding finisher and clearly capable of playing at the top level. He left for Charlton in 2011 and has spent the last six years as one of the leading strikers in the MLS with New York Red Bulls. 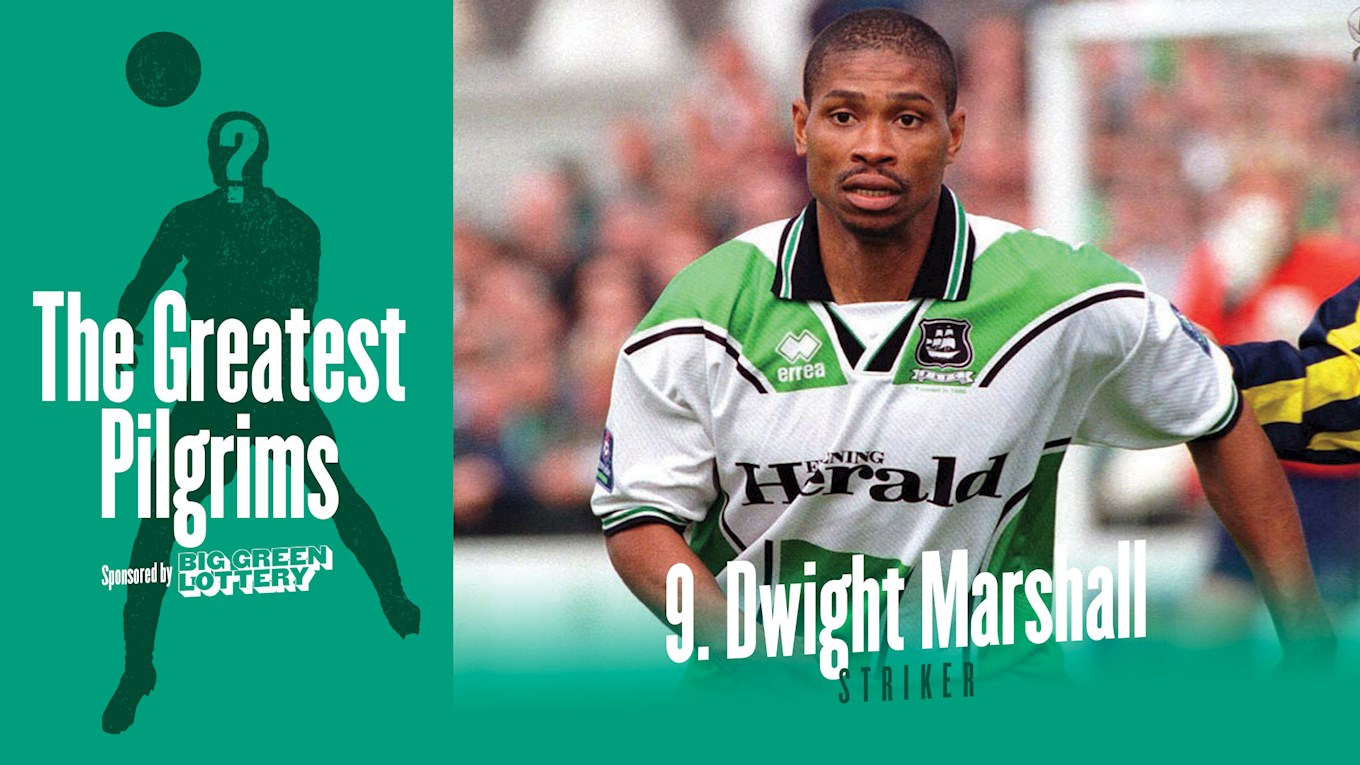 Speed, skill and enthusiasm combined to make Dwight Marshall one of the great Argyle strikers of the 1990s.

Marshall spent his early years in the non-league game, working an office job in London at the same time. He was recommended to Argyle manager David Kemp in 1991 and the signing proved to be one of the best of that era.

Dwight was outstanding from the start, scoring 14 goals in his first campaign and bamboozling defences with his pace and trickery. His form was such that Premier League Middlesbrough briefly took him on loan but could not afford to make the deal permanent.

Marshall returned to Home Park for another year of excellence and was sold to Luton in 1994. After four years as a Hatter, he returned to Argyle for a swansong to his career and a great Pilgrim striker. 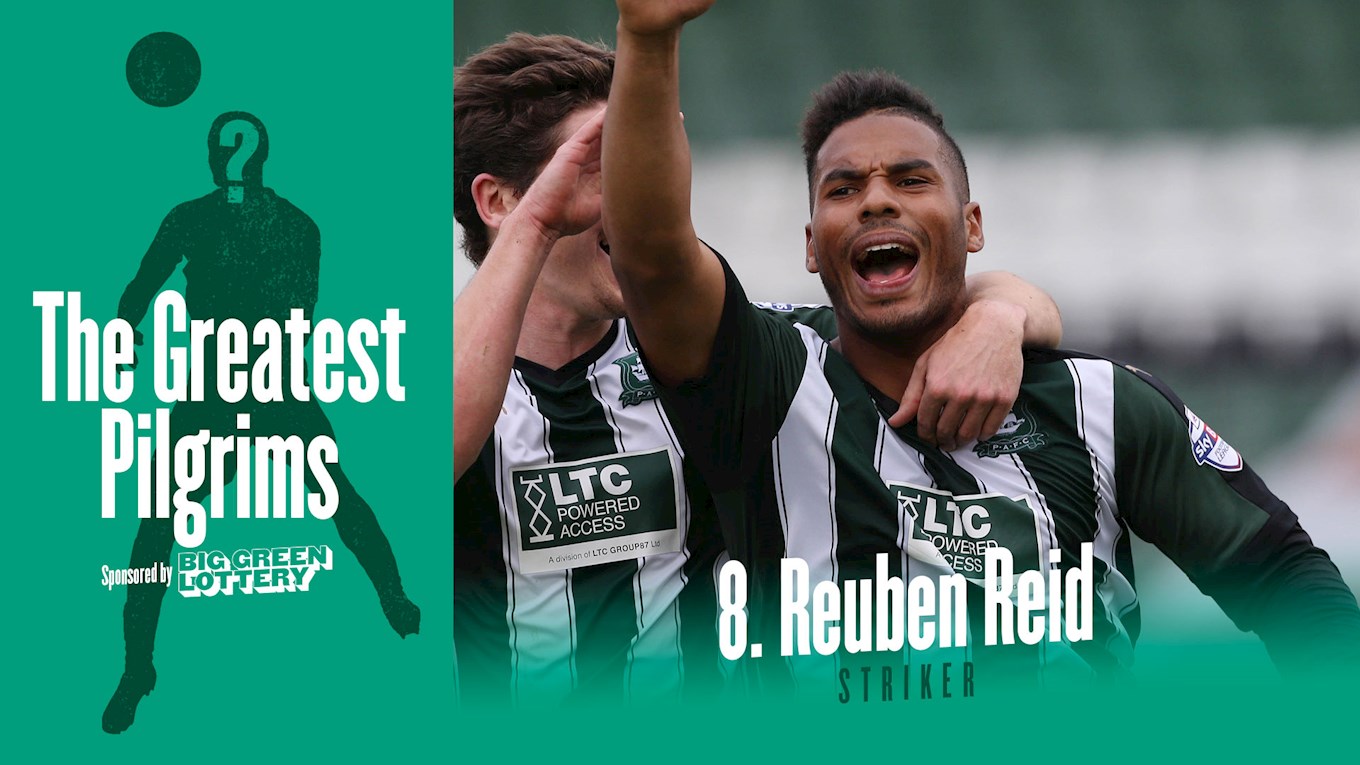 It took Reuben Reid three attempts to finally show his worth at Home Park but he took his last chance with amazing results.

Reuben was a powerful junior at Argyle but unable to make a real impact in a side competing well in the Championship. After a series of loan spells, he was allowed to join Rotherham and scored enough goals with the Millers to earn a big move to West Brom.

Unfortunately, it didn’t work out at the Hawthorns and he joined Oldham, then Yeovil, returning on loan at Argyle in 2013. It was, however, a long-term loan the following year that saw him realise his promise as a Pilgrim.

The deal was made permanent the following year and he would become the first Pilgrim to score more than 20 goals in a season for almost two decades. He was physically immense but also had the composure of a quality finisher.

Reuben is now at Cheltenham after enjoying spells with Exeter and Forest Green following his third departure from Home Park in 2016. 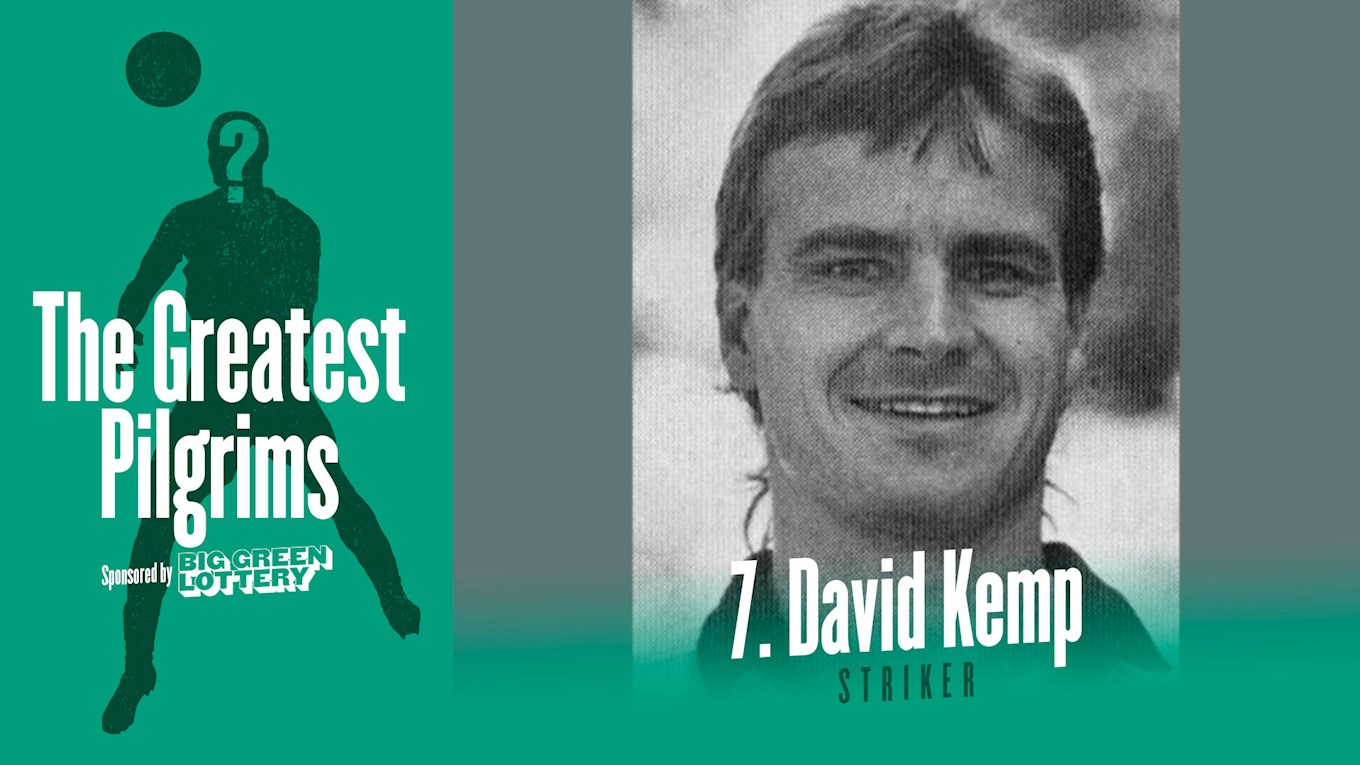 A brilliant striker, David Kemp was the classic goalscorer of the 1980s era, born to poach opportunities in the box.

Kemp was a fine young non-league striker when given his professional chance with Crystal Palace. He went on to score goals for Portsmouth and Carlisle before signing for the Pilgrims in 1979.

It was a time when strikers were expected to do all their work in the penalty area and Kemp was superb at sniffing out chances. He absolutely loved scoring goals and he did the job in style, notching a total of 45 times in 95 appearances as a Pilgrim.

Kemp left Argyle in 1982 and spent the remaining years of his playing career in American football. He returned to Home Park as manager in 1990 and then again as assistant to Tony Pulis in 2005. 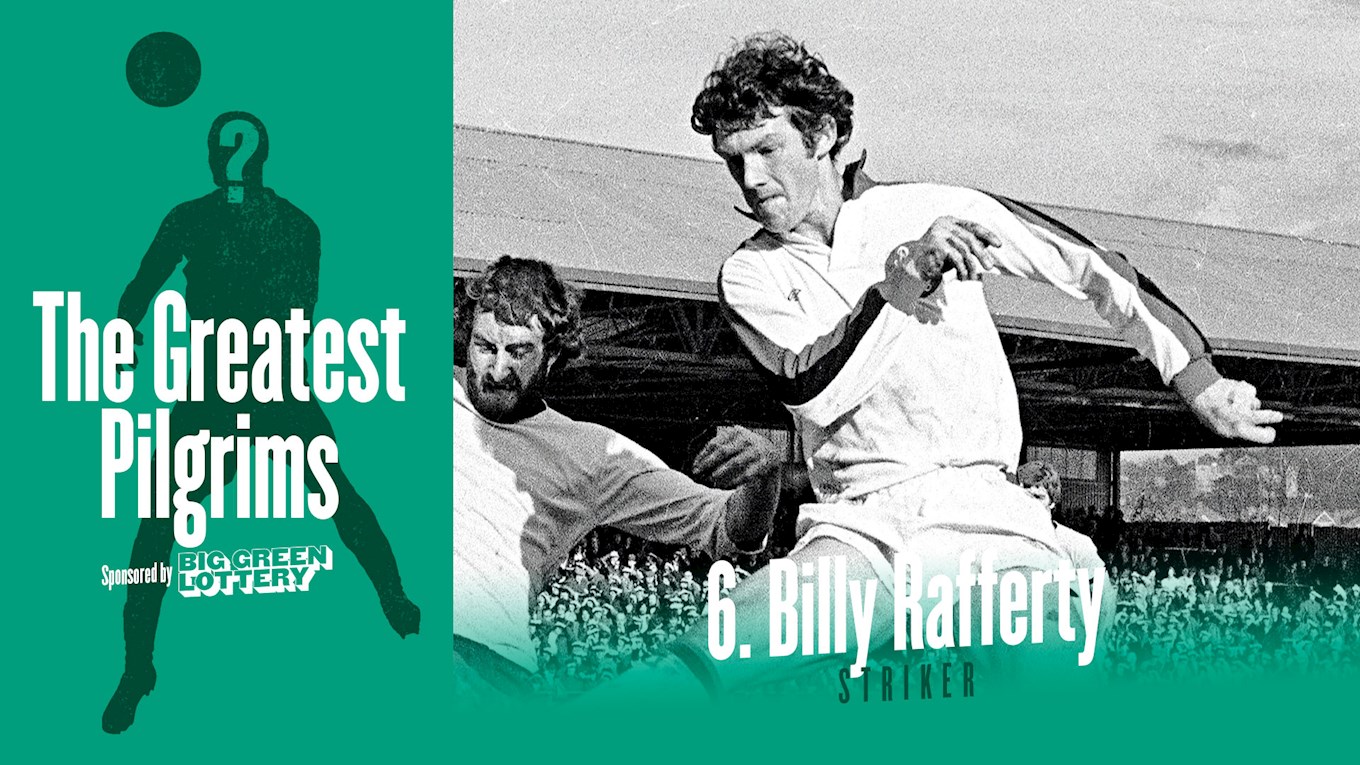 Although he will always be remembered as the other half to arguably the greatest strike-partnership in Argyle history, Billy Rafferty is deservedly recognised as a great striker in his own right.

The combination with Paul Mariner through the mid-1970s was the stuff of legend, as they dominated defences in a time of superb attacking football at Home Park. Rafferty had spent the early part of his career with Coventry and Blackpool.

He arrived at Home Park in 1974 and was the perfect partner for Mariner. Rafferty was a powerful forward, strong and quick, with terrific finishing ability. His understanding with Mariner was incredible and their partnership was the highlight of a promotion-winning team.

Rafferty scored 40 goals in 101 appearances for the Pilgrims before moving back to Carlisle in 1976. He also played for Wolves, Newcastle, Portsmouth and Bournemouth.