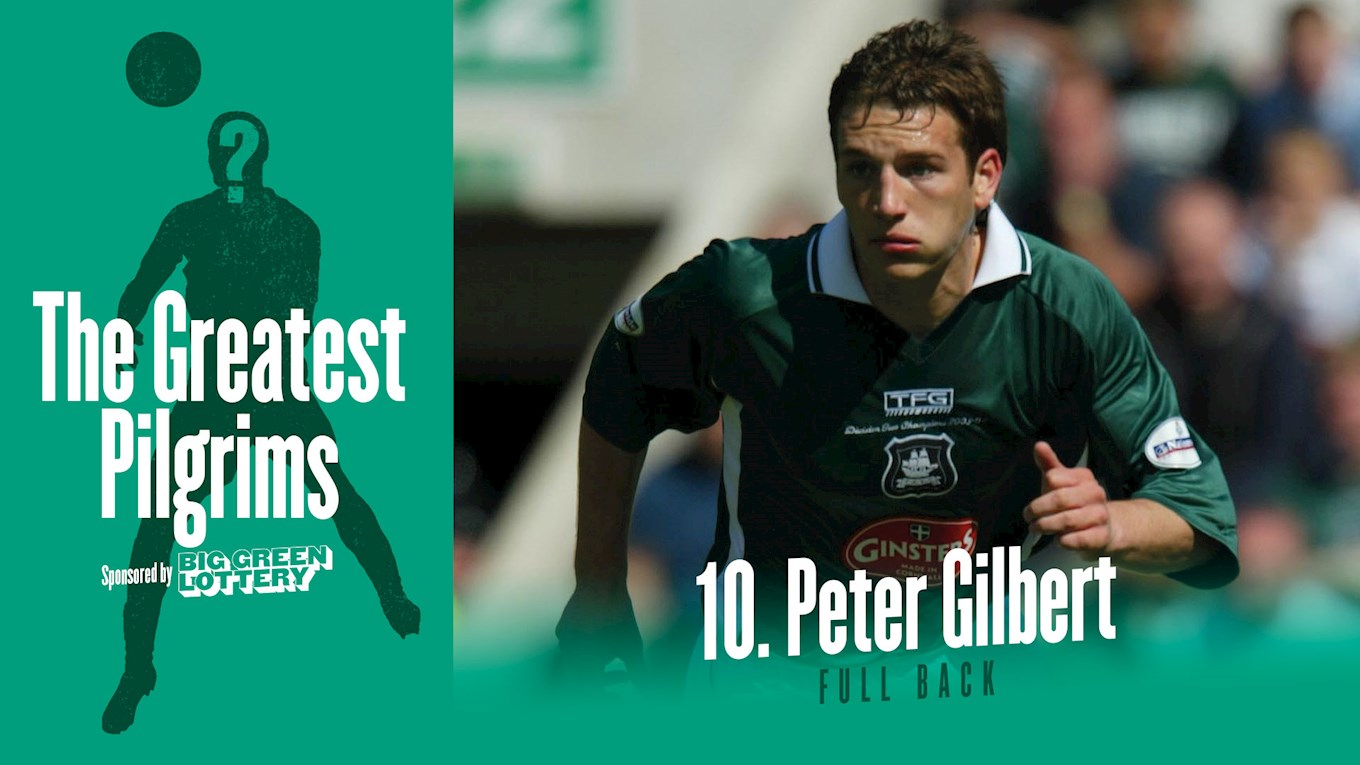 One of the heroes in Paul Sturrock’s Argyle team that won the Second Division title, Peter Gilbert was a class act at left-back and a player who always looked comfortable, even in difficult situations.

A trainee at Birmingham City, Gilbert’s early progress was curtailed by a serious knee injury and he was given the chance to rebuild with a loan stint with the Pilgrims in the summer of 2003. The move was soon made permanent and the Green Army had a new favourite.

Gilbert was completely unflappable under pressure, despite being a young left-back still learning his trade, and his reliable performances were an integral part of a fine defensive unit built by Sturrock.

His form earned Gilbert a call-up to the Wales Under-21 side and he remained a quality performer for the Pilgrims in the Championship before Leicester City swooped with a £200,000 transfer.

Gilbert’s career meandered a little after leaving Home Park, turning out for Sheffield Wednesday Oldham, Northampton, Southend and Lincoln, but fully deserves his place in our top ten. 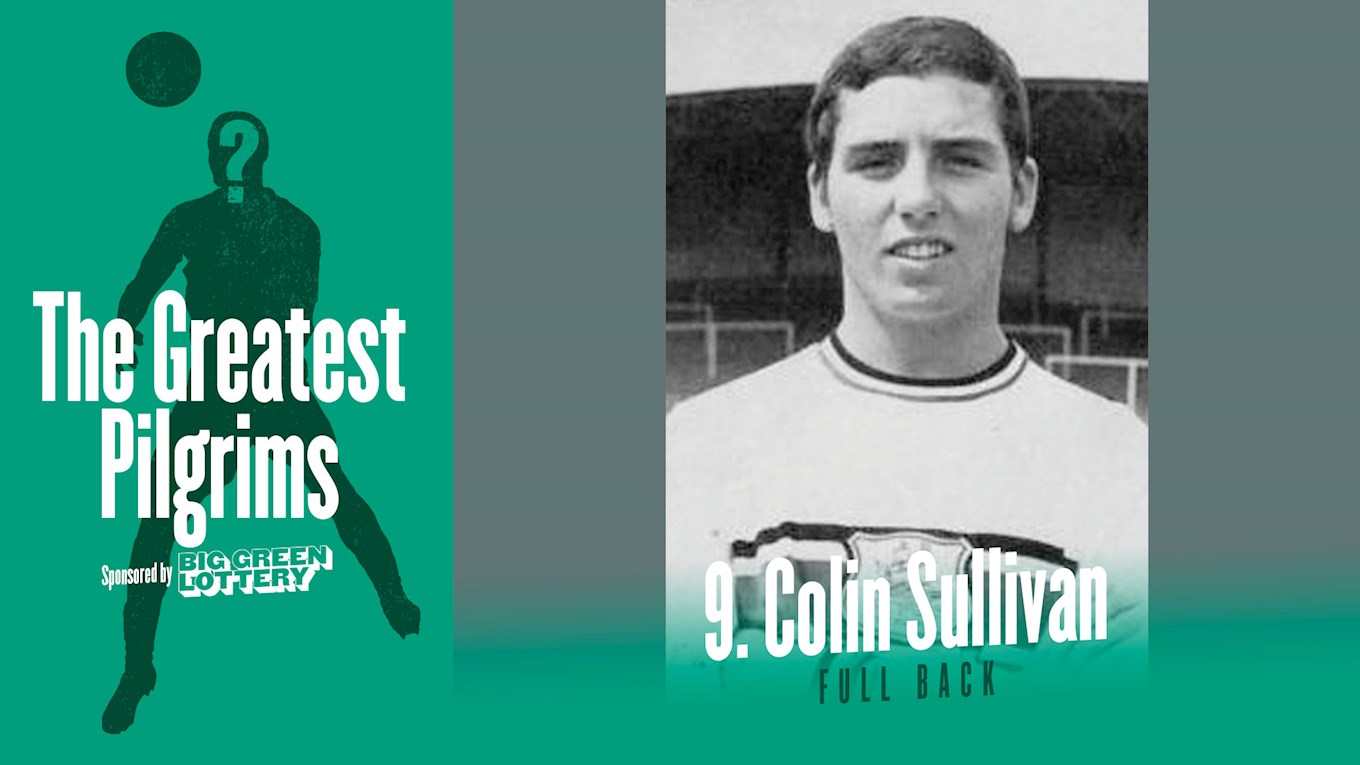 Born in Saltash, Colin Sullivan made Argyle history on his debut in 1968 as he became the youngest Pilgrim to play in the first-team, aged just 16 years at the time.

It was no flash in the pan and Sullivan soon established his position as the first-choice left-back at Home Park. A calm head, impressive maturity and quality on the ball were the hallmarks of what would develop into a fine career.

Over the next six years, Sullivan made more than 250 appearances for Argyle and, despite his young age, was an experienced performer when Norwich City signed him in 1974. His excellent displays at Home Park had also earned Sullivan England recognition at under-23 level.

He played in the Norwich side that lost the 1975 League Cup Final to Aston Villa at Wembley, later starring for Cardiff, Portsmouth and Swansea. Colin Sullivan is number nine in your list of greatest Pilgrim full-backs. 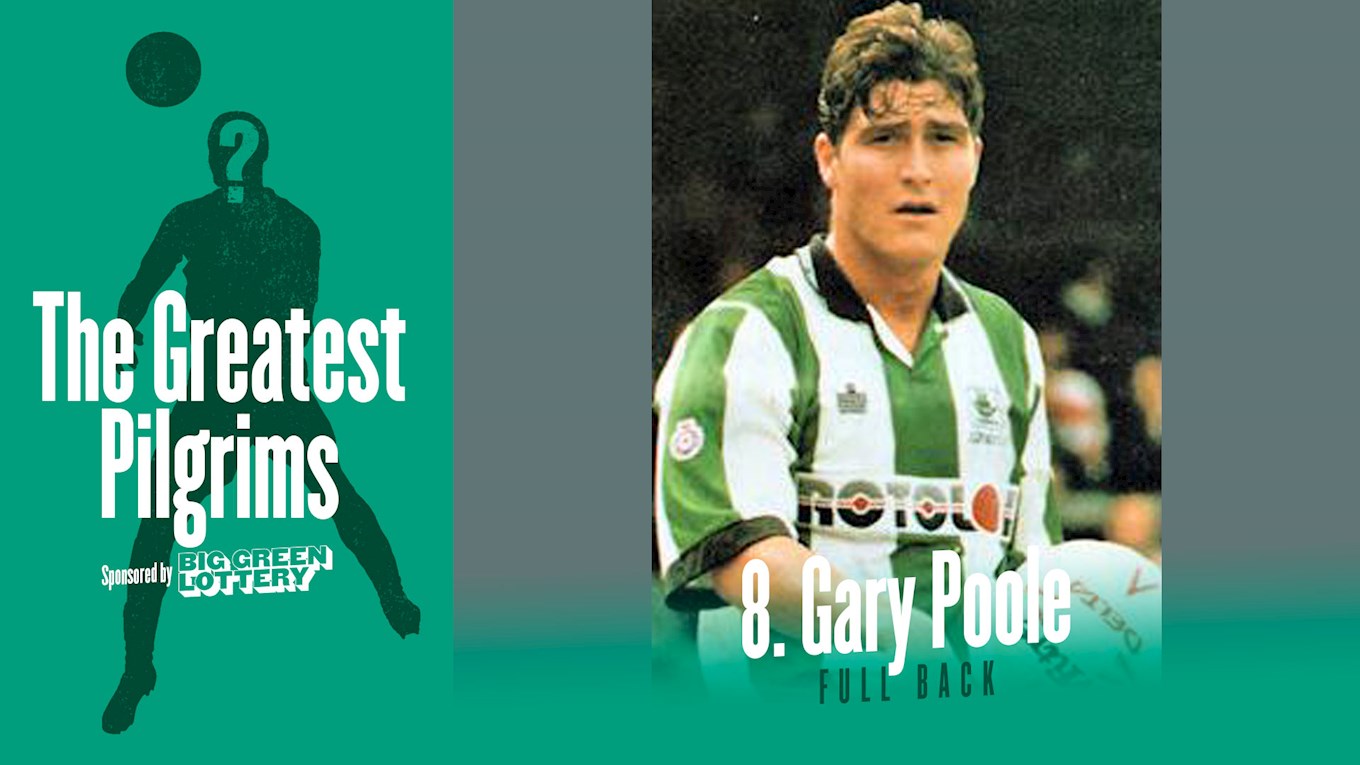 When it comes to the barometer of pure talent, the gifts of Gary Poole rank among the greatest Pilgrims of any position.

A trainee at Tottneham, Poole took time to find his feet in the professional game, spending a couple of years at Cambridge and then moving to Barnet. When new Argyle boss Peter Shilton became aware of his availability, Poole was quickly signed to Home Park.

Over the course of just one season, Poole was soon given the captain’s armband and performed brilliantly in an inconsistent campaign for the club. Blessed with natural athleticism and class on the ball, Poole was soon regarded as one of the outstanding right-backs in lower league football.

As well as defensive strength, Poole was capable of scoring some wonderful goals with his cultured right-foot and his brilliant season at Home Park prompted Southend to pay a club-record fee of £350,000 to take him away from the Theatre of Greens.

Poole later played for Birmingham and Charlton. A fantastic player and one of our greatest ever full-backs. 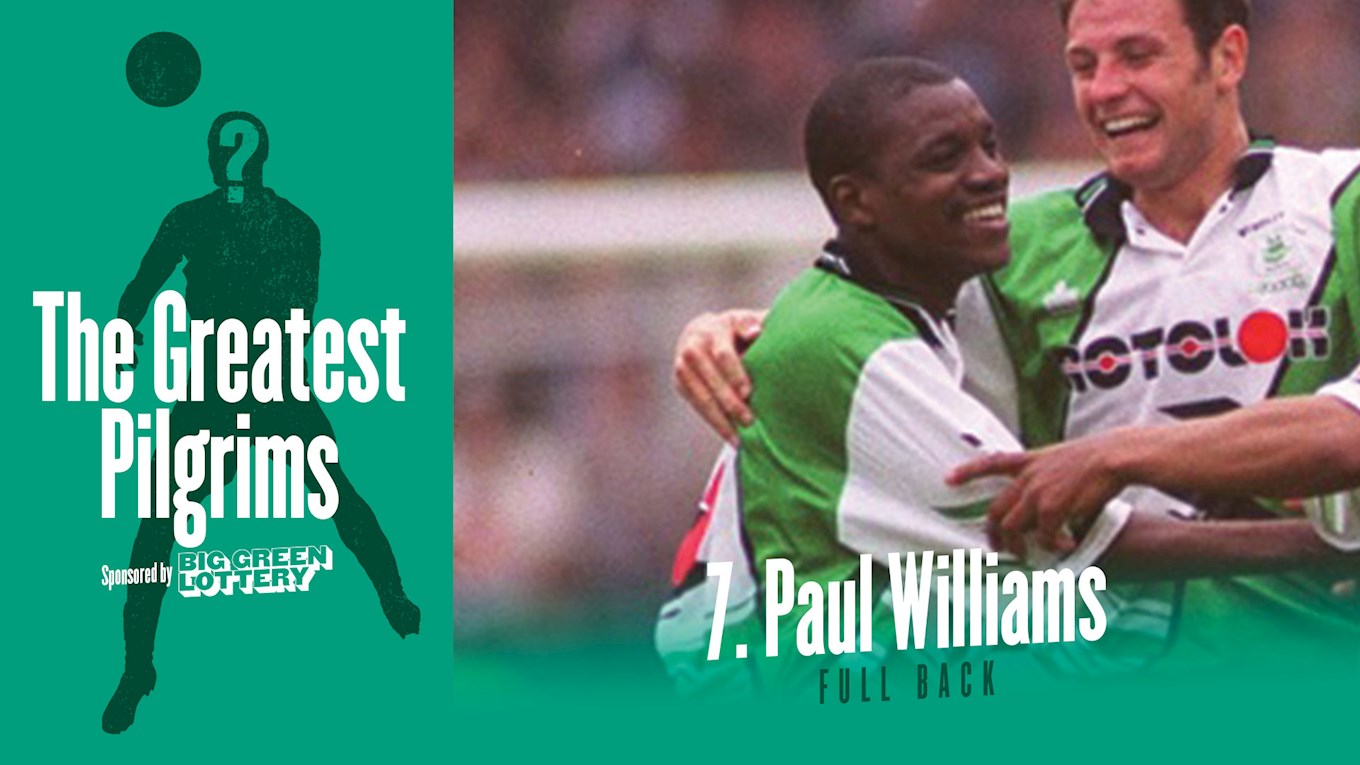 Revered for one iconic moment in Argyle history but also an outstanding full-back over the course of three seasons, Paul Williams was one of the stars of the 1990s at Home Park.

The young left-back learned his trade at Stockport and showed enough early promise to earn a move to the Premier League at Coventry City. Unfortunately, he was unable to break through to the first-team and Argyle manager Neil Warnock convinced Williams to rebuild his career in the fourth tier.

It proved to an inspired move by the boss, as the likeable Williams flourished in his new environment and became a hero to the Green Army when his wonderful header against Colchester sent Argyle to Wembley and eventual promotion through the play-offs.

His energy and enterprise was a sight to behold down the left flank. Williams left after relegation back to the fourth tier, signing for Gillingham and then Bury. Paul Williams: a great Pilgrim. 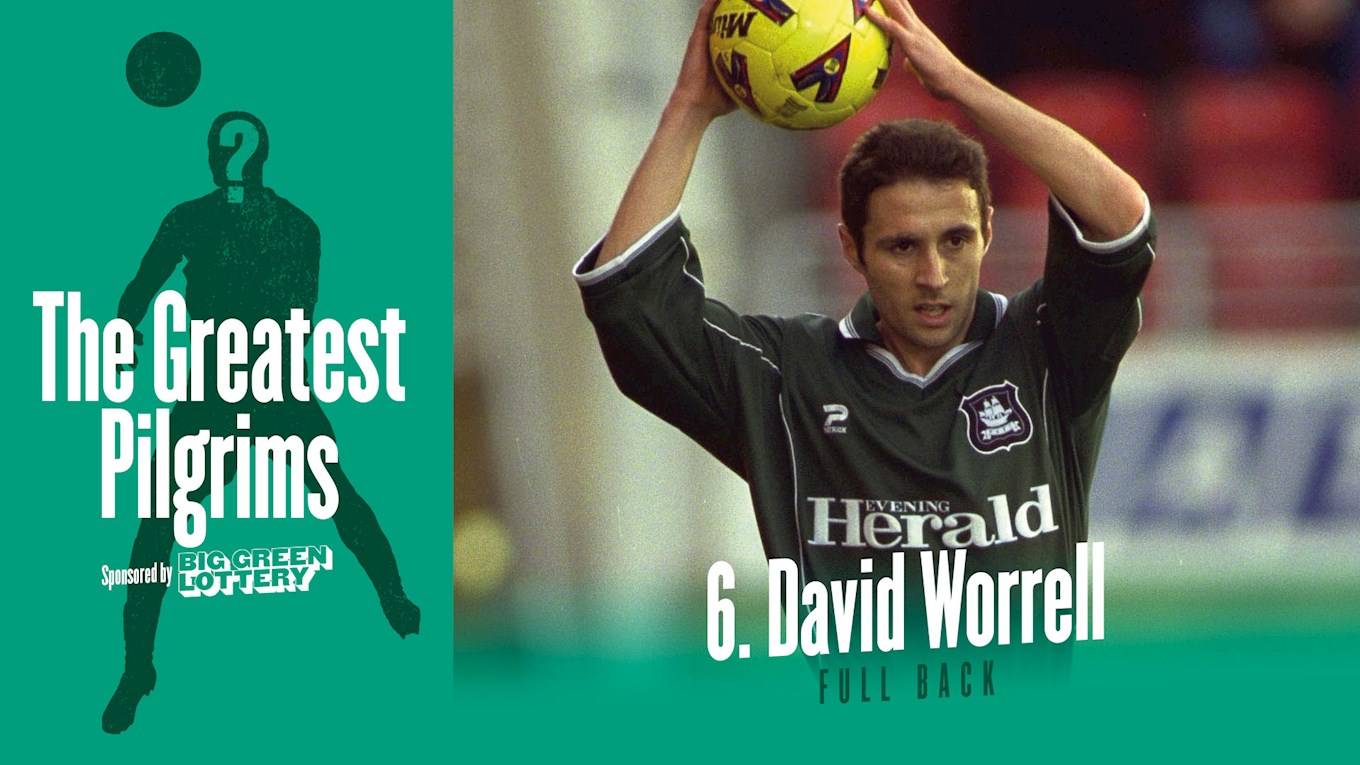 Not many Pilgrims can claim to have won two titles during their time at Home Park; David Worrell is among this elite group and fully deserved for an outstanding right-back.

The Republic of Ireland Under-21 international moved to Blackburn Rovers as a teenager but then switched to Dundee United for first-team opportunities under boss Paul Sturrock.

When Luggy took the job as manager at Home Park, Worrell was one of his first recruits and he would spend the next four brilliant campaigns as first-choice at right-back, aside from an injury caused by a heroic challenge in a game at Barnet.

Worrell was one of the key men in the Sturrock team that rose two divisions to the Championship in the space of three years, securing his place in Home Park history. He left for Rotherham in 2005 and later played for Dundee and Montrose in Scotland.