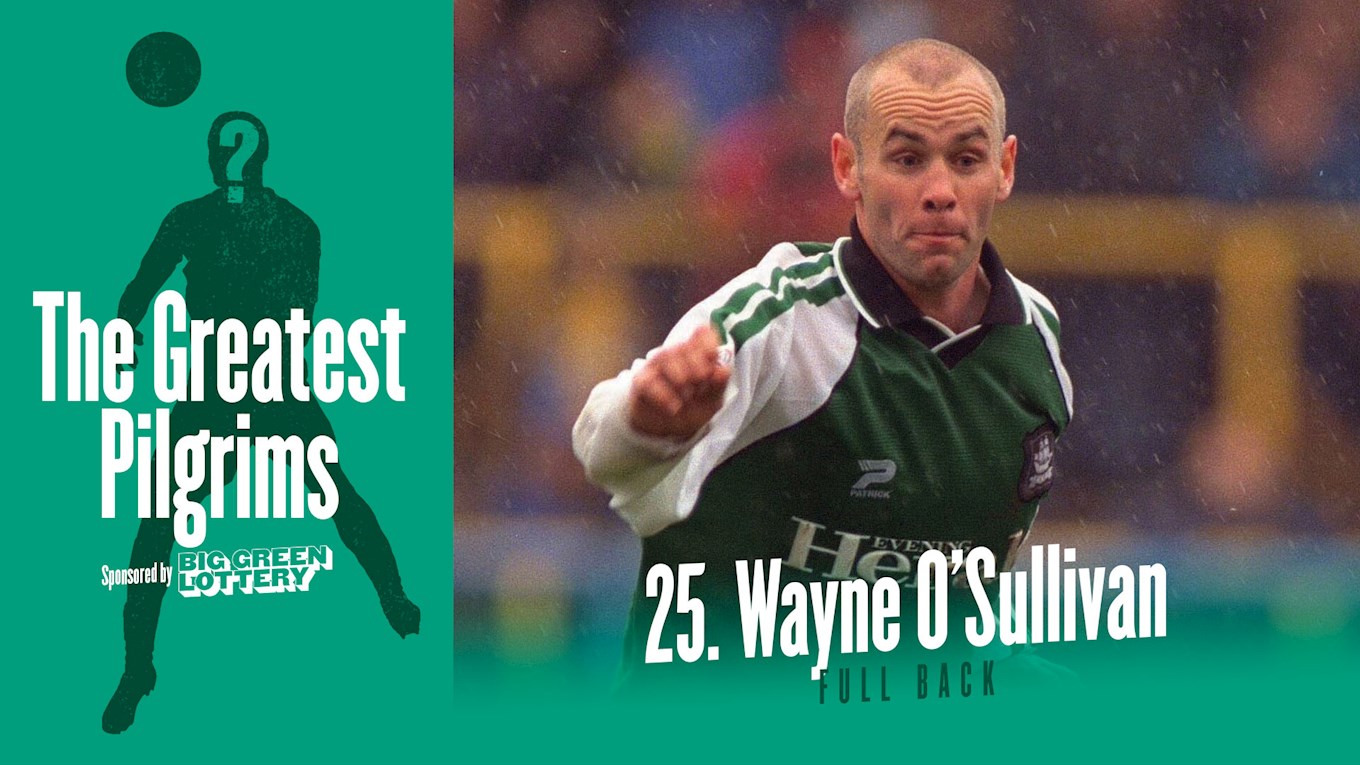 Born in Cyprus, Wayne O’Sullivan came through the ranks as a junior at Swindon Town and enjoyed three successful years as a young professional at the County Ground before switching to Cardiff City in 1997.

During his time as a Bluebird, O’Sullivan largely operated in midfield but this would change when he came to Home Park in the summer of 1999.

Despite the Pilgrims languishing in the depths of the fourth tier at the time, O’Sullivan became a hero to the Green Army with his versatility, consistency and honest hard work in every performance.

Just as Argyle were beginning to show signs of building a stronger squad and with O’Sullivan now considered a key figure for the future, he rejected the offer of a new contract to embark on a new football adventure in Australia with Parramatta Power.

He also played for Northern Spirit and the Central Coast Mariners in Australia before moving into management. Wayne O’Sullivan takes his place as number 25 in your list of greatest Pilgrim full-backs. 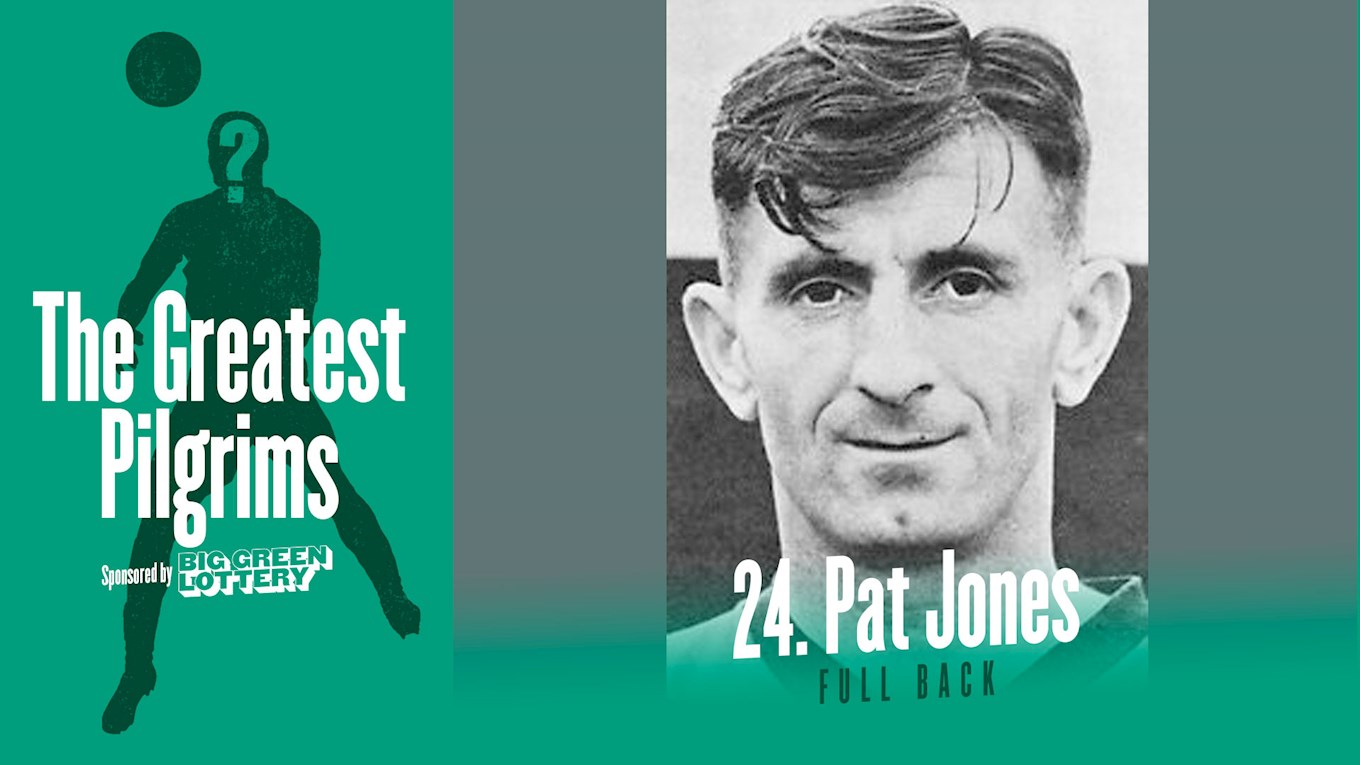 The legendary Pat Jones reached an incredible 441 outings for our club over the course 11 years as a Pilgrim, making him number six in our list of all-time appearances.

A homegrown hero, Jones was born in Plymouth in 1920 and only the intervention of World War Two prevented him from coming to prominence in the professional game a lot sooner than his Argyle debut in 1947.

Over the next decade, Jones was number one choice at left-back and, despite his diminutive size, he was lauded by the Green Army for consistency and reliability in the Argyle defence.

An ever-present in the side that won the Division Three (South) title in 1952, Jones eventually retired in 1958 and sadly left us in 1990. Pat Jones: a great Pilgrim. 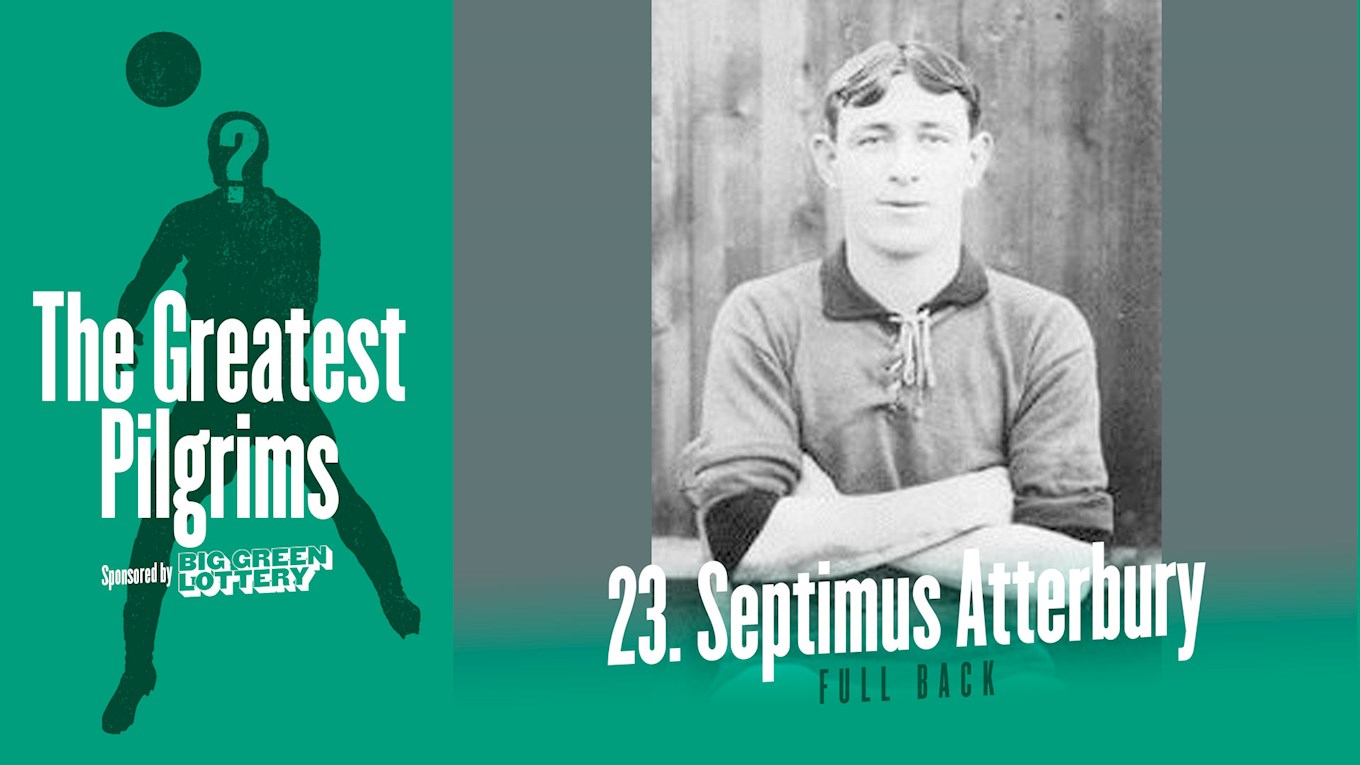 The football story for Septimus Atterbury began as a youngster with Loughborough and Kettering Town before moving to Barnsley at the turn of the last century.

A couple of brief moves followed and then Sep settled down for four excellent seasons at Swindon Town. When he signed for Argyle in 1907, Septimus Atterbury was an established full-back and fiercely determined in his play.

A linchpin of the Argyle defence over the next eight seasons, World War One halted his career but he still had enough in the tank to return for a couple more campaigns into his forties.

His supreme influence over the side made a move into coaching a natural progression for Atterbury, who placed great emphasis on the importance of fitness and stamina. Despite almost a century passing since he graced Home Park, Sep is still remembered as a great Pilgrim. 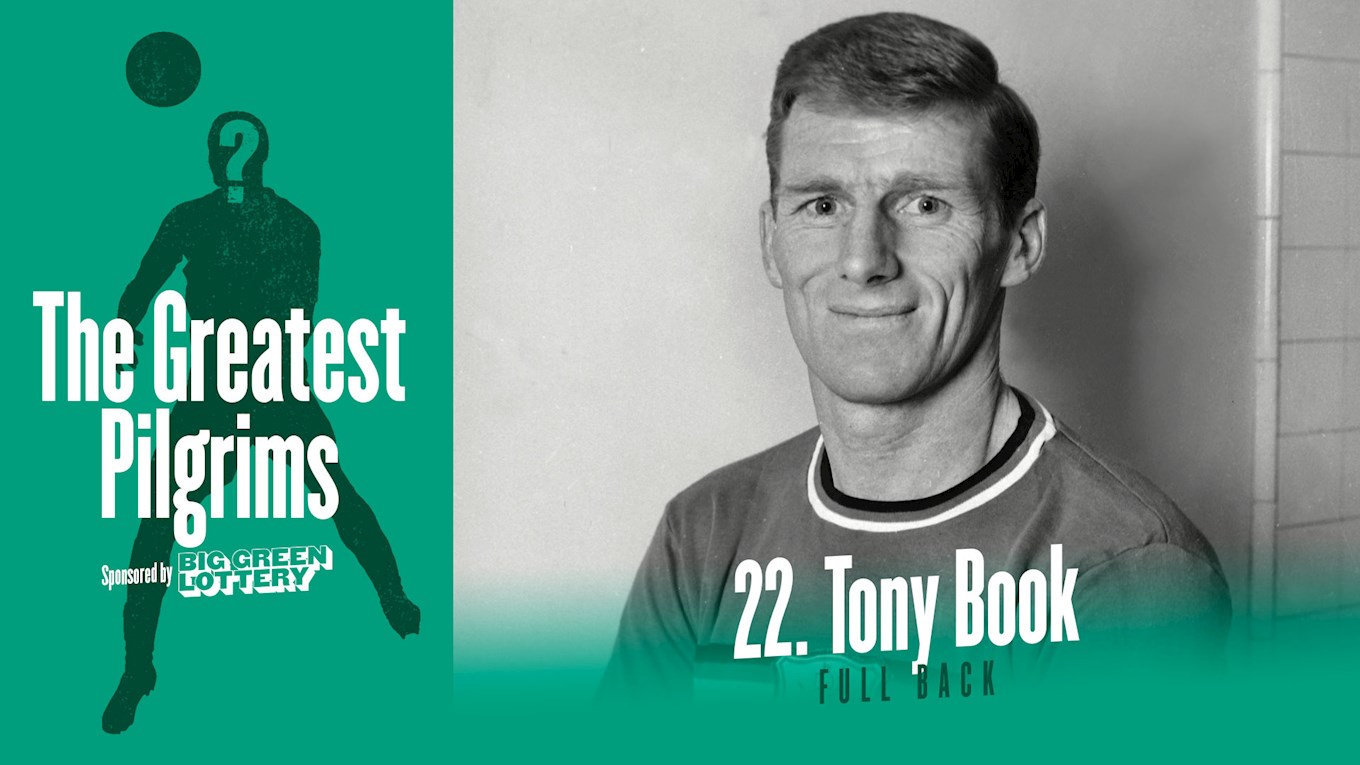 For pure talent and ability, Tony Book was one of the very best to play at Home Park and two brilliant seasons as a Pilgrim catapulted this cultured full-back to greatness.

After a low-key early career with Bath City, where he also worked in the military and building trade, Book briefly played in Canada before his former boss at Bath, Malcolm Allison, brought him to Home Park.

It was a gamble for the new Argyle manager but turned out to be one of the most inspired signings of the era. Despite starting his Football League career at the age of 28, Book was a revelation and more akin to a modern full-back with his willingness to get forward at every opportunity.

When Allison moved to a new challenge at Manchester City, Tony Book also made the switch, earning Argyle £17,000 in a big transfer fee at the time. Book continued his extraordinary rise, winning the League, FA Cup, League Cup and European Cup Winners’ Cup with the Citizens.

He became captain of Manchester City and was named the Football Writers’ Association Footballer of the Year. Book later managed City on three occasions and a legend of their club, who was given his chance at Home Park. 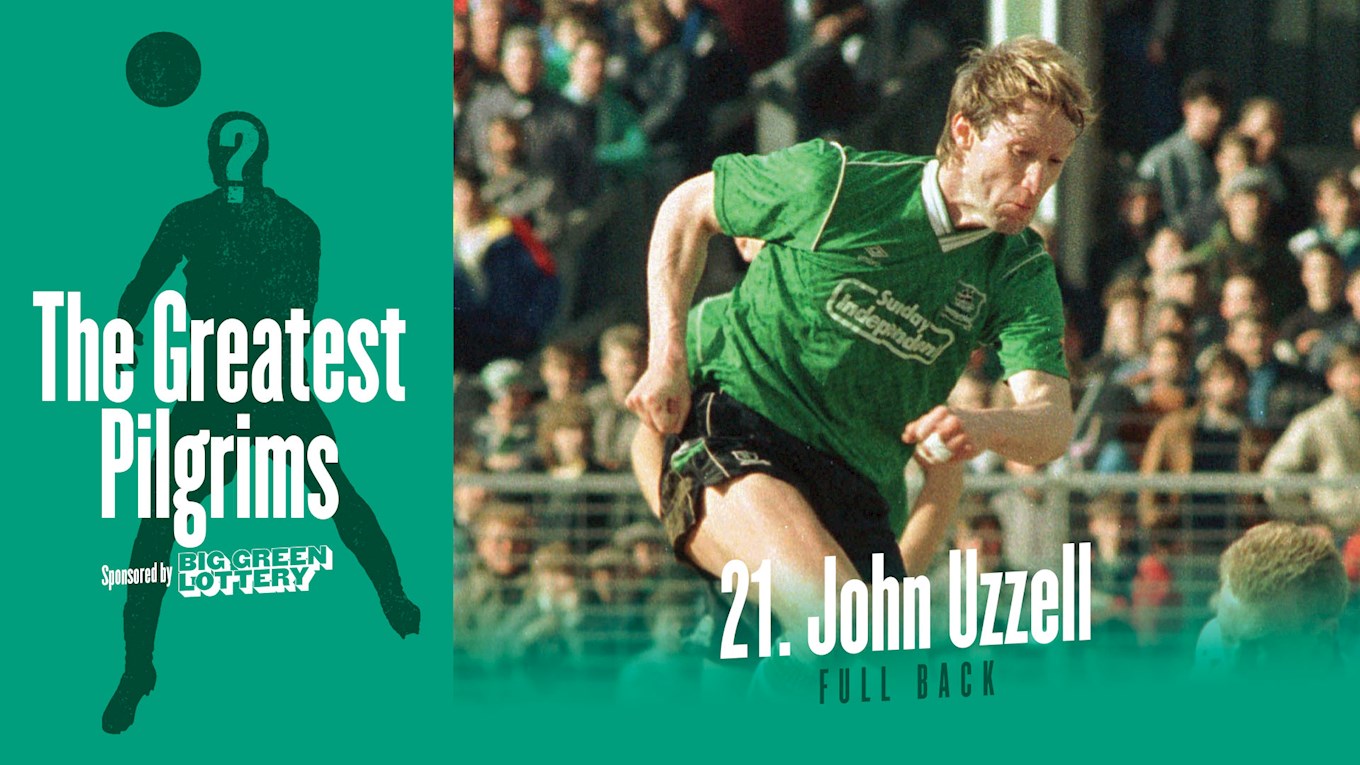 A true homegrown hero, John Uzzell spent his youth watching football on the Home Park terraces and fulfilled his childhood dream of turning professional with his club.

Over the course of 12 years from 1977 – 1989, Uzzell made the left-back spot his own, racking up an impressive 354 appearances for Argyle. Honest hard graft and a sweet left-foot were the hallmarks of Uzzell’s career.

He earned a testimonial against Brian Clough’s Nottingham Forest and fine reward for a fantastic career as a Pilgrim. The Green Army loved their hometown star and it was a sad day when he moved to Torquay United in the summer of 1989.

Uzzell spent two years at Plainmoor but suffered a horrific facial injury in a clash with Brentford’s Gary Blissett. This great Pilgrim then moved into media work and often reported on Argyle games at Home Park.