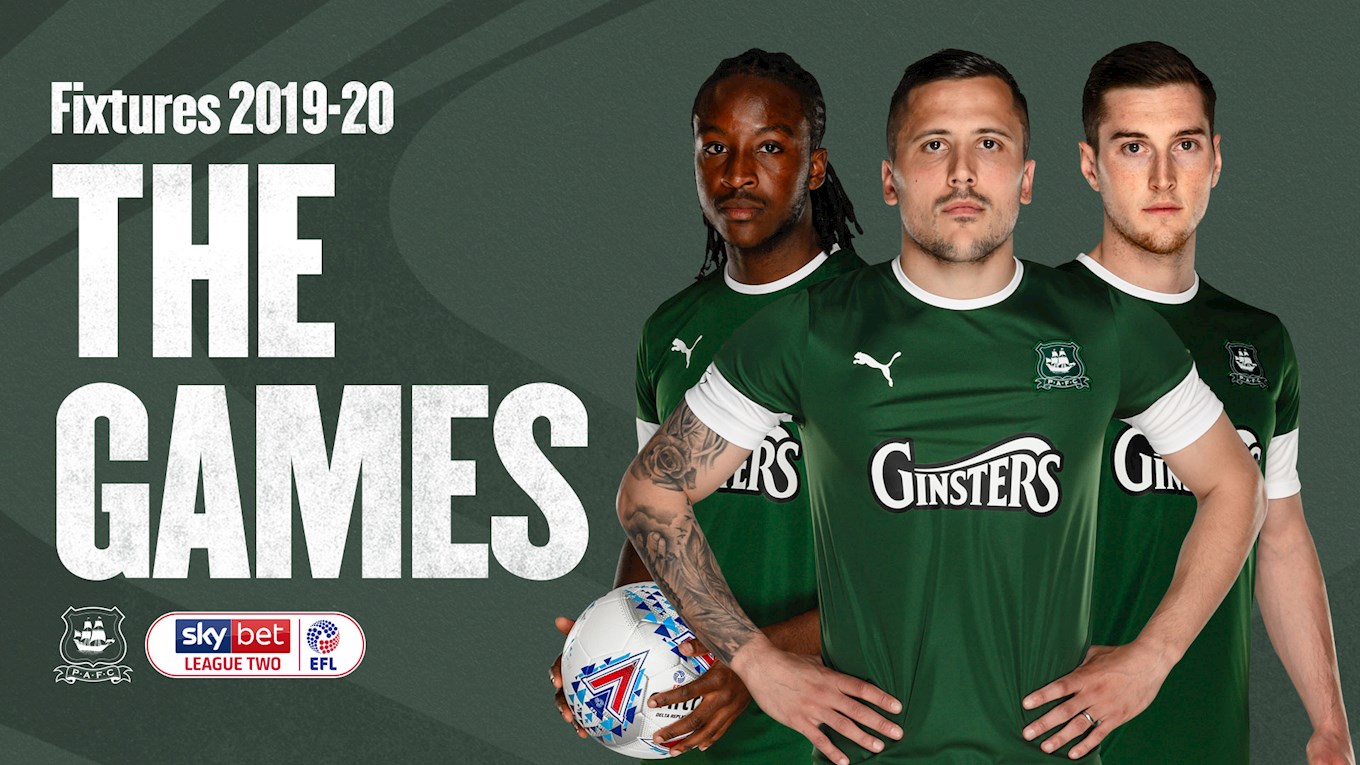 The Pilgrims start the campaign at one of new manager Ryan Lowe’s former clubs, Crewe Alexandra, on Saturday, August 3, and will finish the season – nine months and nearly 11,500 miles later – at home to the Alex’s near neighbours Port Vale on Saturday, April 25.

The Greens’ first home game, on Saturday, August 10, is against Colchester United, with EFL new boys and title-favourites Salford City next up at the Theatre of Greens for the first of six midweek games this season, on Tuesday, August 20.

That is followed by the visit of Walsall to Home Park on Saturday, August 24, as we begin the season with three home matches in the opening five fixtures

The return at the Peninsula Stadium, Moor Lane, Greater Manchester, where last season’s National League play-off winners are based, is also a midweek affair, on Tuesday, February 11.

The other new venue that we visit for the first time in our 94th EFL season sees us play at the New Lawn, in Nailsworth, Gloucestershire, home of Forest Green Rovers, on Saturday, November 16.

Closer to home, Ryan Lowe and his new signings will get their first taste of a Devon Expressway Derby when we visit Exeter City on Saturday, October 26, with the return at Home Park on Saturday, March 21.

There is another Westcountry derby on Boxing Day, Thursday, December 26, at Cheltenham Town, coming on the back of a pre-Christmas away trip to Sol Campbell’s Macclesfield on Saturday, December 21.

After then entertaining Stevenage on Sunday, December 29, we are at home to Swindon Town on New Year’s Day, Wednesday, January 1.

The longest trip of the season comes on Saturday, January 11, when we make the 778-mile round-trip to Carlisle United – a week after another 600-mile return journey to Scunthorpe United.

As well as Salford City, we will play two other teams home and away on a Tuesday night: Crawley Town, in West Sussex on September 17 and at Home Park on January 28; and last season’s Vanarama National League champions Leyton Orient, at home on October 23 and in east London on March 17.

The visit of Northampton is one of three of our final five matches that are at home, starting with Forest Green coming to the Theatre of Greens on Saturday, April 4 before the whole campaign winds up at with a traditional 3pm kick-off  against Port Vale at Home Park on Saturday, April 25.