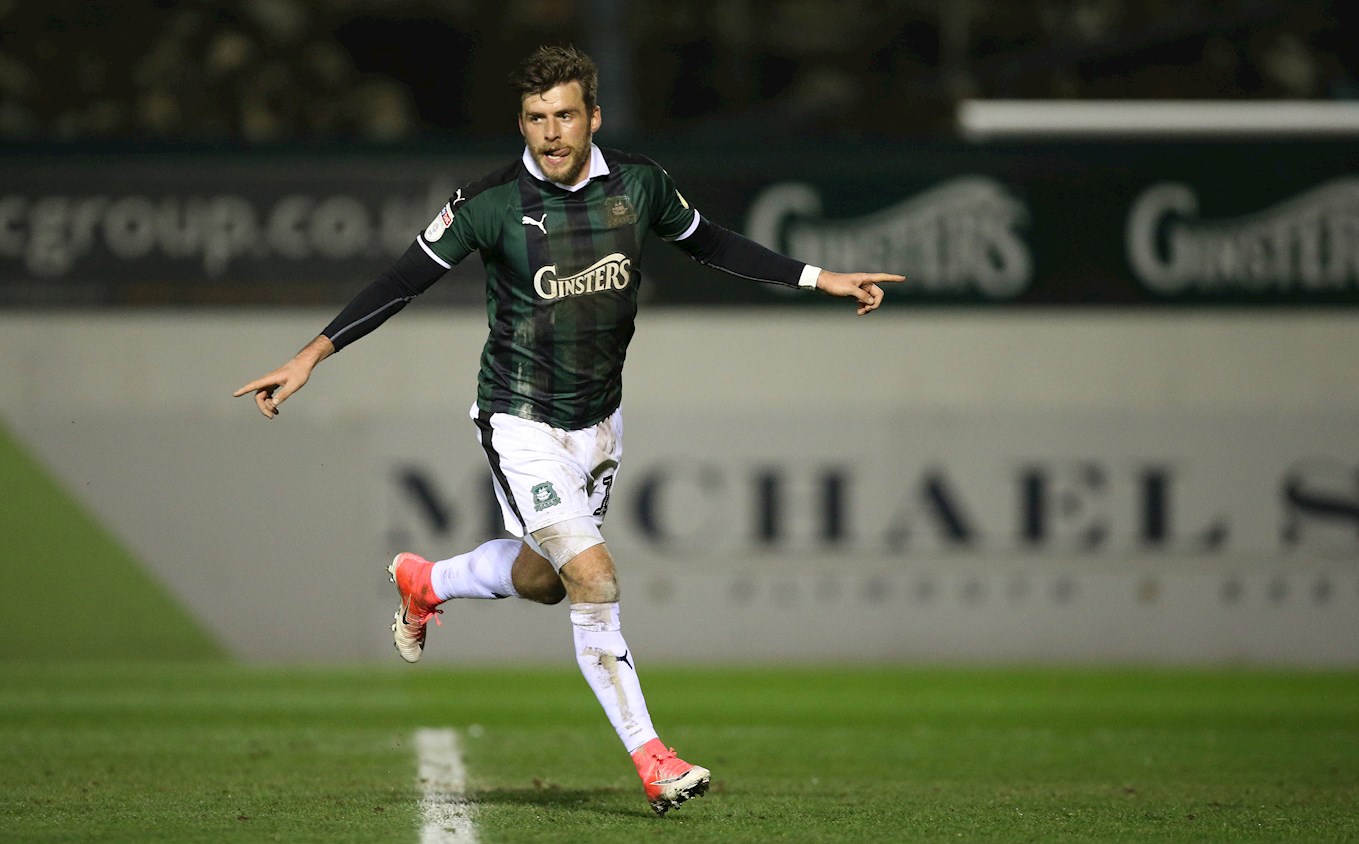 ARGYLE started and finished on a bright note under midweek floodlights for the final time this season, as they overcame both Shrewsbury Town and Storm Gareth.

It was a close-run thing whether Gareth's wind or Argyle’s slick passing game caused more havoc in an opening period in which the Pilgrims were good value for former Town player Freddie Ladapo’s 16th goal of the season.

However, Shrewsbury weathered both storms and came back stronger after half-time to level through ex-Pilgrim Ollie Norburn, who could not beat Matt Macey from the penalty spot but slammed home the rebound.

Argyle battened down the hatches, though, and came through the testing conditions on the pitch and in the air to win the match a minute from time through a Graham Carey penalty.

As promised by manager Derek Adams in a rare hand-revealing pre-match Press call, Antoni Sarcevic had returned to the Pilgrims' midfield against his former club after falling out of consideration because of a two-match suspension.

Sarcevic was recalled in place of Oscar Threlkeld, having been absent from Argyle's previous two matches – at third-placed Sunderland and against leaders Luton Town on Saturday – after picking up ten yellow cards for the season.

Fellow former Shrew Joe Riley retained his place in the starting 11 ahead of Ash Smith-Brown. Indeed, Argyle’s side was chock full of players who had previously represented the opposition: David Fox began his first-team career in Salop; Niall Canavan spent time on loan at the New Meadow; as did Ladapo, who scored four goals there in a 15-game spell two seasons ago.

Shrewsbury, captained by Norburn, made four changes from the side beaten 2-1 at Rochdale four days earlier, bringing in Scot Golbourne, Josh Laurent and Stefan Payne, as well as Anthony Grant, who returned from injury.

Argyle were so dominant in the opening moments, and Shrewsbury so timid, that it was mildly surprising that it took all of eight minutes for the Pilgrims to find the net. Surprising, too, at that point, that it would be the only goal of the first half.

It came from a piece of quick thinking by Fox after the award of a corner to the Pilgrims that caught the visitors unawares, as they clearly felt the ball had not crossed the line before it was cleared.

Fox implored Ruben Lameiras quickly to pass him the ball short, which he did, and one ex-Shrew was unimpeded as he drove in a low cross to another, Ladapo reading his intentions to run in front of the goalkeeper and finish from no range at all.

Going behind emboldened Shrewsbury but Argyle, driven on by Sarcevic, continued to threaten, and Fox came close to doubling the score, and his own tally for the season, when he volleyed a clearance back towards goal. The ball was destined for the bottom corner before ’keeper Steve Arnold intervened at the last.

Shrewsbury then had a spell that put Argyle firmly on the back foot without truly threatening Macey’s goal. The spell was broken when Sarcevic found an empty furlong on the right and crossed to where Carey was waiting, trigger cocked.

Lameiras, though, came in front of his poised team-mate and struck the ball on the run, the lack of control sending his shot over the crossbar.

Lameiras then found himself in Sarcevic country to drive a ball low across the face of the goal, with Ladapo getting in between two of Shrewsbury’s three centre-backs on the stretch but just unable to get a touch on the ball.

Shrewsbury’s first shot on target came ten minutes before the interval, with Macey easily pouching Norburn’s effort, before another Lameiras set-up invited Carey to attempt a first-time right-footed shot that he could not quite keep down.

Macey turned a fierce free-kick from Shaun Whalley over the crossbar as Shrewsbury ended the half immeasurably more potently than they had begun it, which, actually, is not saying too much.

The windy conditions continued to cause consternation all round in the second period, though not as much as Lameiras did to the Shrews’ defence, twisting and tricking his way through the Town back line before attempting to place a shot into the corner to which Arnold got the merest of telling touches.

Shrewsbury gained parity in what appeared a triply fortunate way. Firstly, Josh Laurent clearly handled the ball in Argyle’s penalty area, immediately before Norburn went down under a challenge from Carey that referee Brett Huxtable was in a minority in thinking was illegal.

To compound the luckless feeling, Norburn’s penalty was saved well by Macey, who, not for the first time this season, saw the thwarted taker smack home the loose ball.

Shrewsbury were suddenly a different prospect – a yard faster, pressing harder, passing with more accuracy – and Argyle were treading water. A neat move between Sarcevic and Carey that slipped Ladapo in for a shot that was blocked by Arnold, briefly hinted at their former dominance, but the match was now in the balance.

Argyle were stretched and tested at the back but still manged to forge some opportunities, notably when Ryan Edwards stride forward from his own half to set up Ladapo for another shot which was bested by Arnold.

The Pilgrims were eventually rewarded for persistence when Grant, possibly tiring, clattered into the back of Lameiras, and Huxtable pointed to the spot for the second time in the evening.

Carey did the rest.