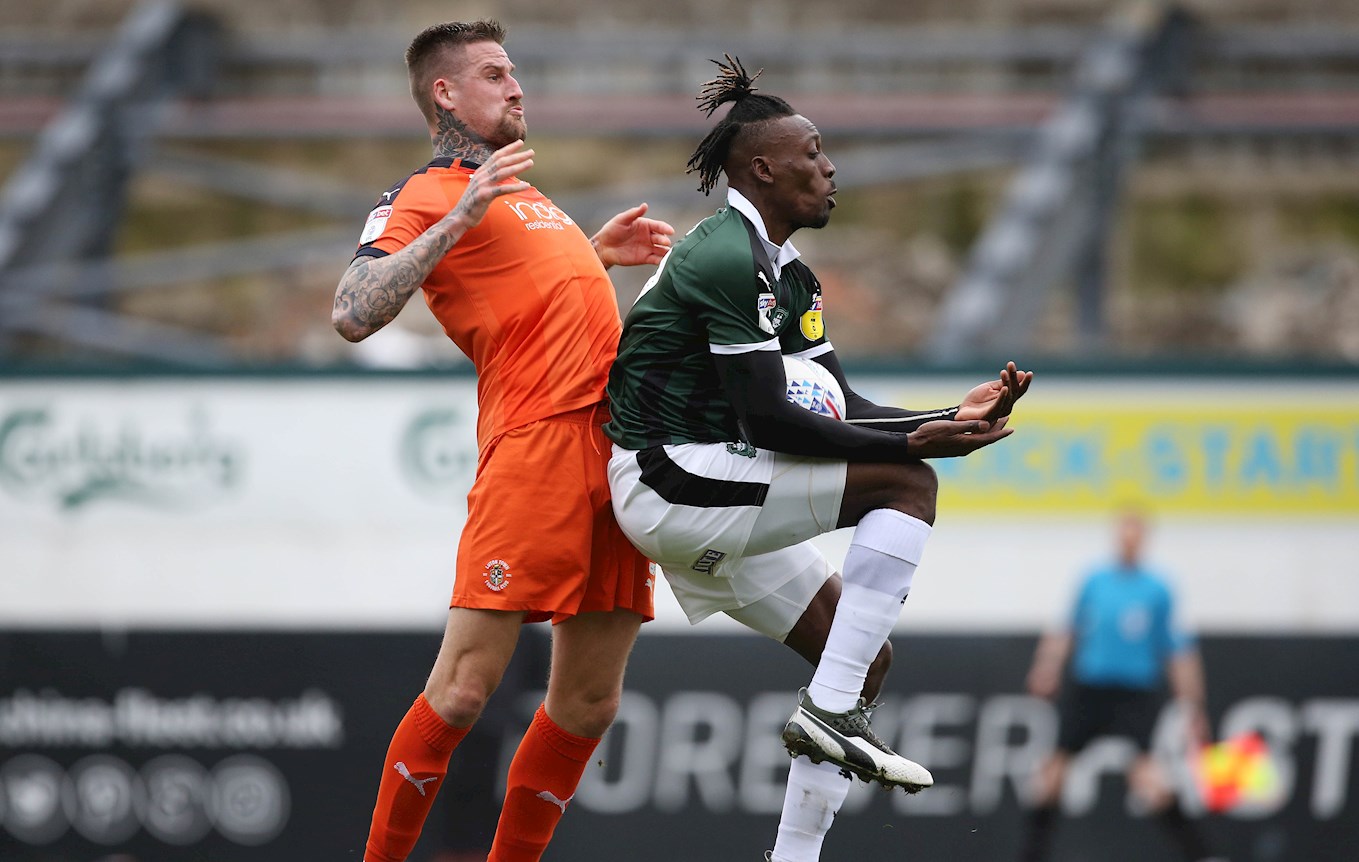 ARGYLE battled valiantly to secure a hard-earned point against table-toppers Luton Town in a hotly-contested affair at Home Park.

The Greens were made to work hard in a physical encounter against an opponent who stretched their unbeaten run to 23 Sky Bet League One games.

Both sides’ full commitment was on display, and while clear-cut opportunities were at a premium, full-blooded challenges and last-ditch blocks were not.

Argyle manager Derek Adams made two changes following his side’s 2-0 defeat away at Sunderland last weekend; one tactical, and one enforced.

Goalkeeper Kyle Letheren was unable to shake off a groin injury that saw him substituted late into the game on Wearside, which facilitated a return to the starting eleven for Matt Macey.

The gaffer also opted to bring full-back Joe Riley back into the starting 11, with Ashley Smith-Brown, teetering on the brink of a two-match suspension, dropping to the bench. Letheren’s omission from the match-day 18, alongside loanee Lloyd Jones – ineligible to play against his parent club – meant opportunities on the bench for development players Michael Cooper and Alex Fletcher, who was the stand-out player in Argyle’s recent Premier League Cup 4-1 thrashing of holders Aston Villa.

The Hatters entered the clash at Home Park on an incredible 22-game unbeaten run in Sky Bet League One, which stretched all the way back to October, when they were edged out 3-2 by fellow promotion-chasers Barnsley.

Nothing, including the loss of their manager Nathan Jones to Stoke City, had been able to stop the Bedfordshire club’s unrelenting promotion charge. Unsurprisingly, Mick Harford kept his side unchanged, which included former Pilgrim favourite Sonny Bradley as captain, knowing that avoiding defeat would take his charges’ unbeaten run to half a full football league season.

The Greens suffered their heaviest defeat of the campaign at Kenilworth Road earlier in the campaign, with the Hatters’ diamond midfield causing the Greens all manner of problems in their 5-1 defeat.

In recent times, Adams has enjoyed reasonable success by matching up like-for-like, most notably in the 1-0 at Peterborough last month. On this occasion, though, Argyle appeared to line-up  in a shape akin to neither their usual, nor the visitors, with Yann Songo’o playing slightly deeper, while full-backs Riley and Gary Sawyer took a more advanced position. If you had to call it something, you could call it a 3-5-2.

If the Greens were wrestling with any demons after their difficult day in Bedfordshire, it was not evident from their early start as a succession of Argyle free-kicks and corners eventually presented an opportunity for Ruben Lameiras, whose angled drive from a tight angle slipped narrowly wide of James Shea’s far post.

As you would expect from a side on a club-record unbeaten run, Luton responded wholeheartedly to the challenge, and Andrew Shinnie hooked a volley from 25-yards well over Macey’s bar as the visitors registered their first attempt on goal ten minutes in.

Luton could have taken the lead midway through the first-half when Elliot Lee, who caused Argyle all manner of problems in the reverse fixture, fired at goal from eight yards out, but was bravely denied by Ryan Edwards with a huge block.

The visitors’ attacking quality was becoming increasingly evident, but Argyle were standing tall. On the break, Oscar Threlkeld’s right-wing cross missed its intended target, Freddie Ladapo, but was not all that far away from creeping in at the far post.

In the space of two minutes, Luton striker Danny Hylton found himself in a spot of bother.

Originally booked for an overzealous challenge on Songo’o. Moments later, after being penalised for a handball while lying prostrate, an aggressive reaction led to a talking to from Darren Drysdale. Before Hylton had a chance to cool off, Harford decided some damage limitation was in order, and hauled him off, bringing on Kazenga LuaLua in his place.

The Greens continued to battle manfully against the table-toppers, hassling and harrying the visitors. Ladapo danced his way into the box, before seeing his goal-bound shot charged down by Matty Pearson.

In a game that was becoming quite fractious, Edwards was the next player to pressure-test Drysdale’s red card threshold, collecting a booking for his late challenge on James Justin.

As half-time arrived, nobody within the Theatre of Greens could argue that Argyle were not in the game, which perhaps serves as evidence the distance travelled by the Pilgrims since their November meeting with their Bedfordshire opponents.

What the game lacked in clear-cut opportunities, it was making up for in physicality, and you would imagine both sides were happy enough returning to their dressing-rooms at half-time to nurse their wounds and prepare for the final 45-minute slug-fest.

The teams emerged for the second-half unchanged, save for Hylton’s premature departure, and both sides continued to press for advantage in full-blooded fashion.

A Luton corner found its way to Bradley, whose fancy footwork and lay-off was eventually cleared, before Argyle came close on the counter. Edwards’ long ball forward found Ladapo, who played Riley through. His low pass to the edge of the area found Lameiras, whose low drive from the edge of the area was held by Shea.

The game was beginning to open up, and Hatters' top scorer James Collins came closer than anybody to opening the scoring shortly afterwards, when his header back across goal from a LuaLua cross was tipped brilliantly on to the top of the bar by former Town loanee Macey. Moments later, Macey had to force another goal-bound effort wide, as Lee struck on target from 20-yards.

Again, though, Argyle refused to lay down, and Lameiras’ sweet interchange with Riley and Oscar Threlkeld on the edge of the Hatters’ box resulted in the Portguese pulling his shot just wide of the near post, brushing the side-netting on its way behind.

A tug-of-war throughout, no moment in the game summed up Argyle’s commitment to the cause than when Niall Canavan threw his not insignificant frame at Lee’s goal-bound effort, deflecting it wide through sheer force of will.

Recognising the grueling nature of the tie, Derek Adams made a move to freshen up his forces with just over 20 minutes to go, bringing Ryan Taylor and Jamie Ness on for Ladapo and Threlkeld.

The Greens threatened to snatch all three points when a neatly played counter saw Lameiras’ low cross flash across the face of goal, before Riley became the next Pilgrim to put his body on the line to protect the Greens' point in the dying stages.