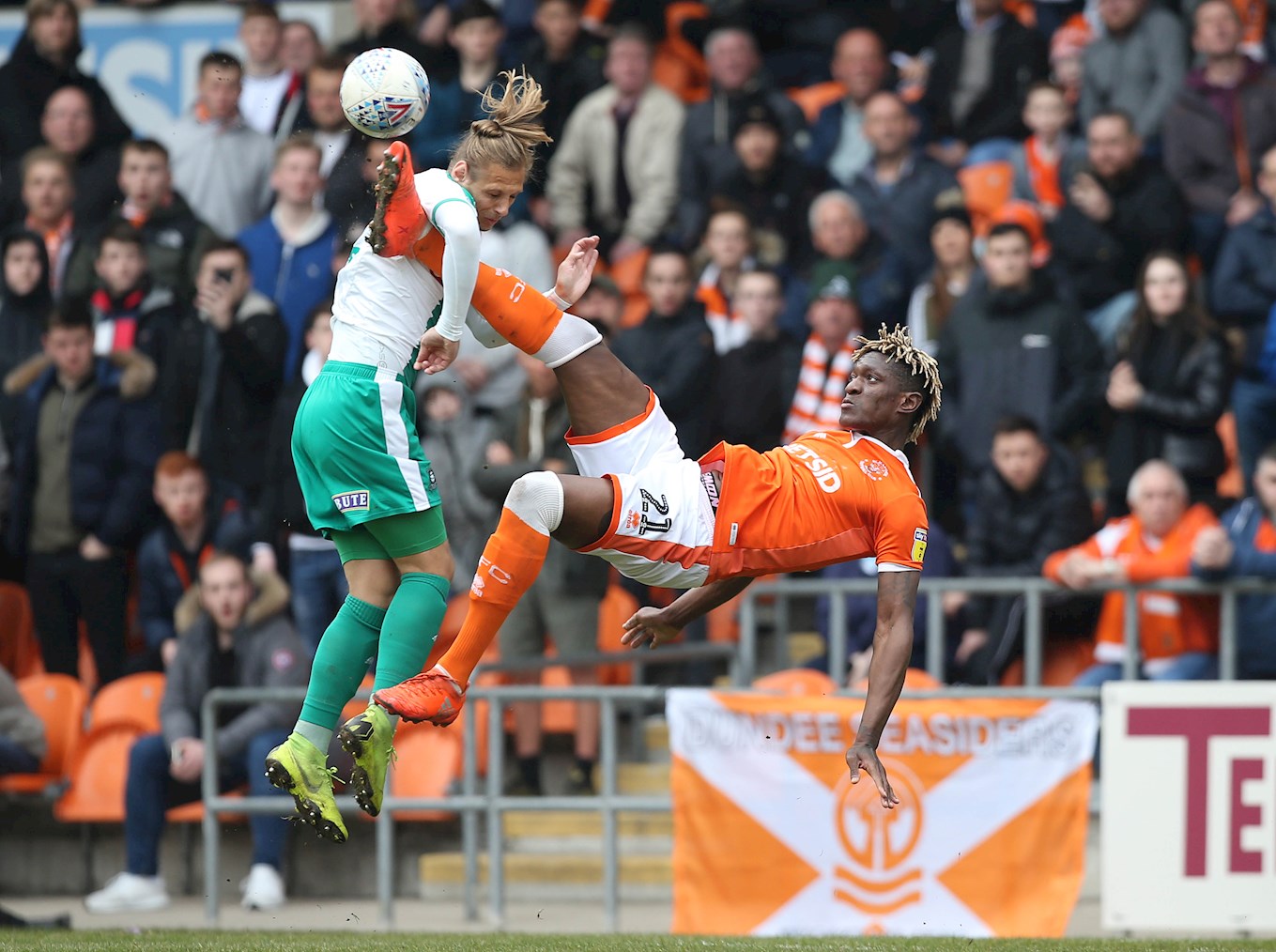 FOR the second time in as many weeks, and for the second successive visit to Bloomfield Road, Argyle surrendered a lead in stoppage time to draw 2-2 in Lancashire.

Following 80-plus minutes of a near-complete away performance, late goals from Marc Bola and a stoppage-time overhead kick from Curtis Tilt snatched two points away from a Pilgrim side who led 2-0 through goals from Freddie Ladapo and Ryan Edwards.

Argyle arrived on the Fylde coast for the second time in three weeks in search of both better weather and a result - and they were at least granted the former of those two desires before kick-off.

Tasked with achieving the latter, manager Derek Adams’ hopes were boosted by the return from injury of talismanic playmaker Graham Carey, who scored one of the stand-out goals in Argyle’s recent history in his last visit to Bloomfield Road.

The player unfortunate to miss out was Yann Songo’o, who dropped to the bench for the first time since the Greens 1-0 win away at Peterborough in early February, while young forward Alex Fletcher was omitted from the eighteen altogether. Jamie Ness slotted back into a deeper midfield role, having operated further forward during the Greens’ Westcountry derby draw with Bristol Rovers seven days earlier.

Unsurprisingly, the hosts opted for a completely unchanged squad following the previous week’s thumping 4-1 win at relegation-threatened Bradford. A midweek announcement from the EFL regarding a potential receivership penalty for the Seasiders amounted to little more than a stay of execution, and so Terry McPhillips’ side entered the fixture against the Pilgrims still an outside shot at the play-offs, with a formal decision to be taken on a possible 12-point deduction due in mid-April.

A proud Blackpool banner unfurled in the main stand before kick-off sported the phrase ‘The Tangerine Dream is back on track’ following the high-profile departure of the Oyston regime in the boardroom; but it was Argyle’s Green Machine that immediately derailed the Seasiders with a goal from the first attack of the game.

A delightful ball from former Tangerine David Fox threaded the needle for Ruben Lameiras, who controlled deftly inside the hosts’ box, before squaring for Ladapo to tap his 17th goal of the campaign into the far corner of Christoffer Mafoumbi’s net.

Shortly after the opening goal, Joe Riley, who was an injury doubt pre-match after failing to complete the game against Bristol Rovers last week, hobbled off through what appeared to be an issue with his arm.

A few minutes later it was his replacement, Oscar Threlkeld who needed treatment, as an ambitious, or daft, depending on your disposition, attempt to strike an overhead kick by Armand Gnanduillet caught the substitute clean in the face, resulting in the first yellow card of the afternoon.

Much had been made of the return to the stands of many Blackpool fans following the end of an Oyston-related boycott, but as the first-half settled following a frenetic start, it was the travelling Green Army that could be heard loudest in Lancashire.

The home support had their first taste of excitement around twenty minutes in, when Gary Sawyer’s clearance was charged down by Antony Evans, who then struck straight at Matt Macey from a narrow angle for the Arsenal loanee’s first meaningful contribution of the tie.

Argyle, though, were not content to just sit behind their one goal advantage, and Lameiras very nearly doubled the Pilgrims’ lead in an attack he manufactured himself. Intercepting the ball deep in Argyle territory, he offloaded to Ladapo, who fed Jamie Ness on the counter. Ness’ pass found Lameiras lurking dangerously on the edge of the area, but his left-footed strike wasn’t the cleanest, and it bobbled narrowly wide of the scrambling Mafoumbi’s far post.

The Portuguese’s miss was nearly compounded a few minutes later when Matty Virtue fired at goal after good work from Nathan Delfouneso down the Pilgrims’ left-flank, but the midfielder’s strike was once again a comfortable height for Macey.

At the other end, Ladapo exhibited some superb target-man qualities to hold off a handful of Blackpool pursuers before sliding the ball in behind to Carey. Unfortunately, the Irishman’s touch wasn’t up to his usual impeccable standards, and the opportunity slipped by on a surface that was beginning to cut up under feet.

As referee Seb Stockbridge blew his whistle for half-time, Derek Adams could barely have hoped for a more professional 45-minute performances from his players, limiting the hosts to only a handful of half-chances on Macey’s goal.

The Pilgrims returned for the second-half unchanged, but for Threlkeld’s introduction, although Ness emerged from the tunnel sporting a head bandage after receiving treatment late in the first-half for a head injury. The wound appeared to be having no ill effects on Argyle’s Scottish midfielder, whose first act of the second-half was to intercept the ball in an offensive position, before laying off to the onrushing Antoni Sarcevic to drill marginally wide.

Sarcevic was again in the thick of the action moments later, when Argyle had a penalty appeal turned down. The midfielder raced into the box, looking to latch on to an aerial ball, but he went down under pressure from centre-back Curtis Tilt.

Fortunately for Pool, referee Stockbridge adjudged it to be a legitimate shoulder-to-shoulder challenge. Moments later, Carey committed a challenge that Stockbridge considered to be less than legitimate, becoming the Pilgrims’ first booking in the process.

The challenges were beginning to fly in, and Sarcevic’s busy second-half took an unfortunate turn when Bola’s late challenge caught him on the ankle. The midfielder received treatment from physio Paul Atkinson, and despite gingerly returning to the pitch for a brief period, could take no further part in the game. On the hour, Songo’o replaced him.

The Greens generated what appeared to be a golden opportunity to add a second goal shortly after Songo’o’s arrival, and Ladapo was once again at the heart of it. Shrugging off his man, with his back to goal on the edge of the area, the Pilgrims’ striker laid off to Ness, whose goalbound effort was charged down at the last possible millisecond by Ben Heneghan, denying the Greens’ mummy-like midfielder a certain goal.

It wasn’t all Argyle pressure, though, and, in truth, the majority of the game was being fought out in the midfield third, with goalscoring opportunities few and far between. This, of course, suited Argyle perfectly, and Blackpool manager Terry McPhillips knew this, bringing on Nya Kirby and Chris Long for Delfouneso and Evans in search of a game-changer.

Unfortunately for him, though, Blackpool were another goal down before his changes had an opportunity to take effect. Carey’s delicious out-swinging free-kick was begging to be met in the box, and centre-back Edwards duly obliged, towering over his man to nod emphatically across the keeper and into the net in front of an ecstatic Green Army.

Committed, by the scoreboard and their substitutions, to attacking, Blackpool came as close as they had all day to unlocking a resolute Argyle defence when Gnanduillet's knock-down was volleyed wide by Virtue. The Greens, meanwhile, were enjoying the additional space now available on the counter, and Ness once again came close to adding to the Pilgrims’ healthy advantage.

They came even closer, too, as Carey struck a free-kick against the post with Mafoumbi comfortably beaten, after Jay Spearing hauled Lameiras down a few blades of grass outside the penalty area.

It was so nearly game over, but, as often happens in football, the momentum offered one last, decisive and violent shift. Blackpool reduced the arrears through Bola’s effort from the edge of the area with five minutes left to play, which raised the spirits of the home fans, as well as the blood pressure of those of a Green persuasion.

With minutes ticking down, and Argyle acutely aware of the previous campaign’s last-minute Blackpool equaliser in the same fixture, Ryan Taylor replaced Ladapo, tasked primarily with ensuring the ball stuck in the Blackpool half.

For the second time in as many weeks, and for the second successive visit to Bloomfield Road, Argyle were unable to hold on to their slender lead. Following a succession of long balls into the box, the ball floated behind Tilt, who hooked an overhead kick into Macey’s far corner to break Pilgrim hearts.